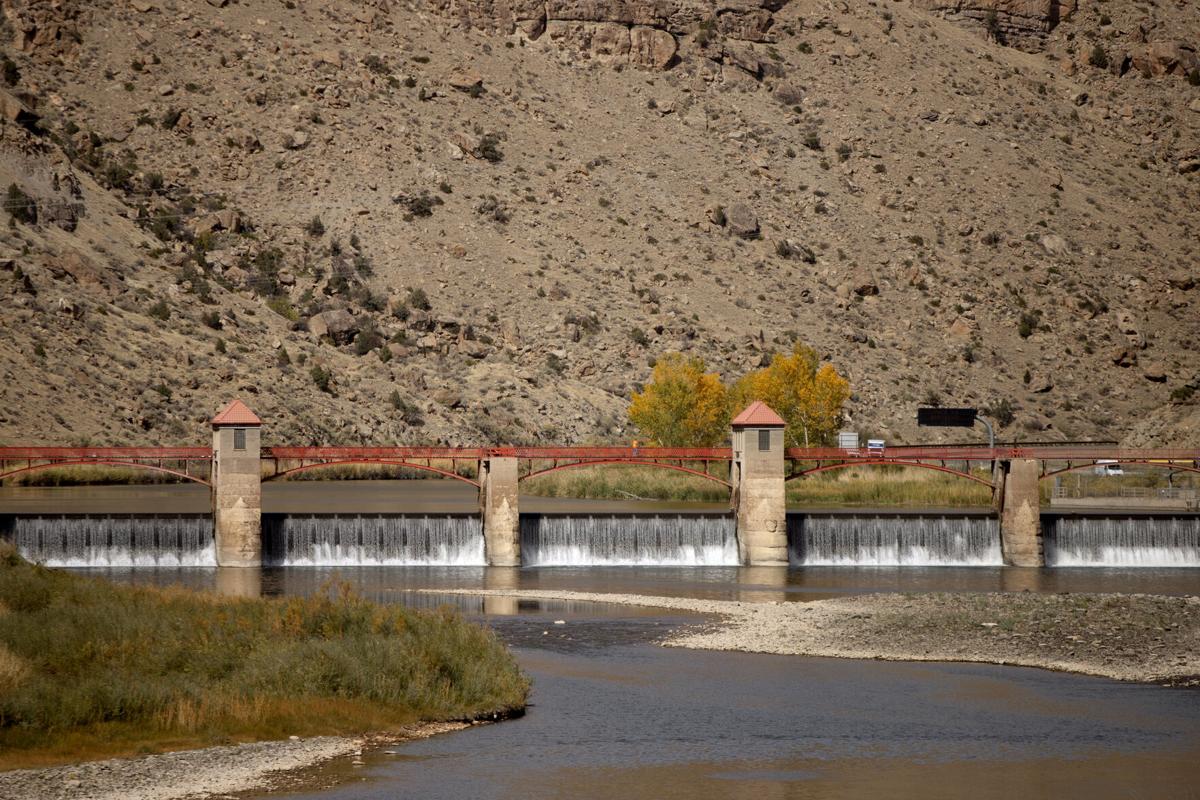 The Colorado River District, which includes the Roller Dam on Interstate 70, covers 15 counties and works to conserve, protect and develop water in the Colorado River Basin in western Colorado. 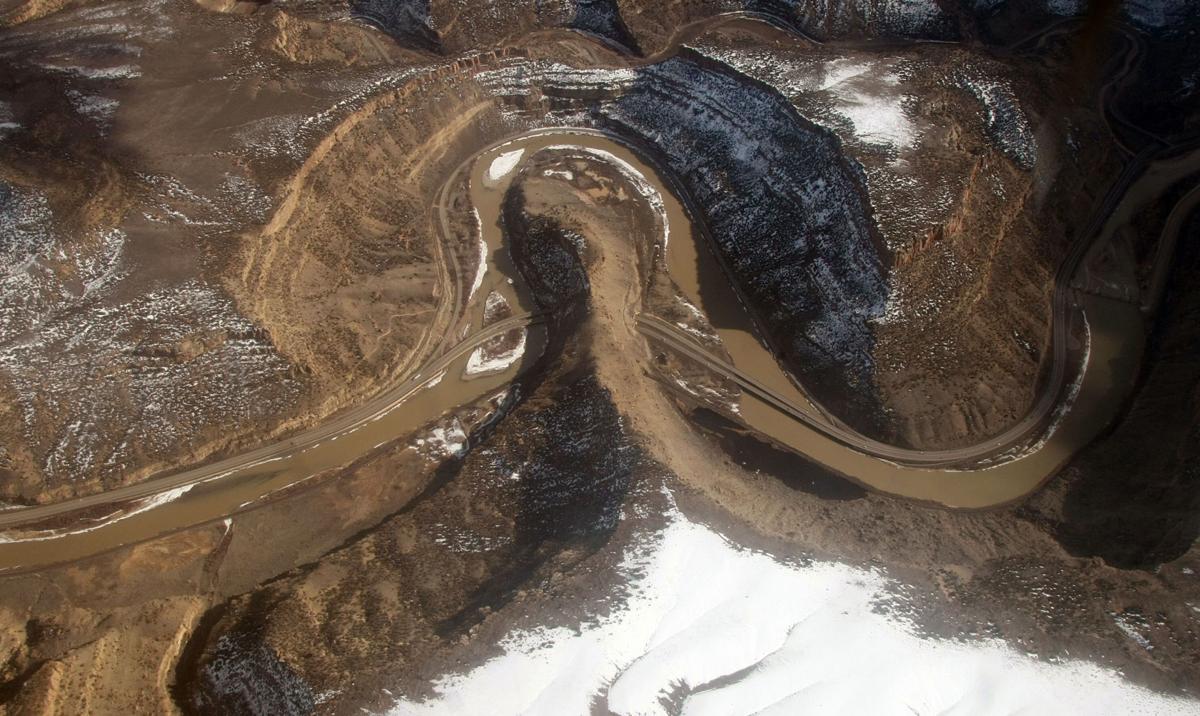 Interstate 70 runs throught he Beaver Tail Tunnel in DeBeque Canyon seen during a flight. The Roller Dam and the Highway 65 exit into Plateau Canyon can be seen on the right side of the photograph. 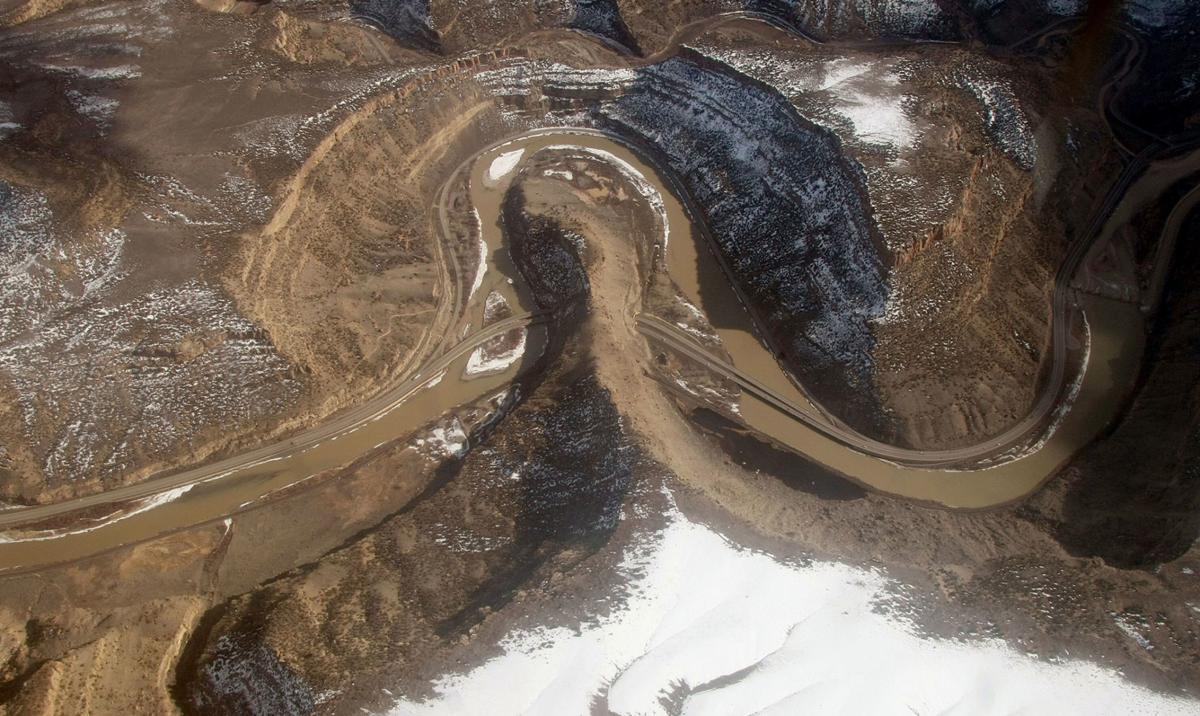 The Natural Resources Conservation Service found the statewide level of Colorado snowpack is higher than normal for this time of year. Interstate 70 runs through the Beaver Tail Tunnel in DeBeque Canyon as seen here during a flight. The Roller Dam and the Highway 65 exit into Plateau Canyon can be seen on the right side of the photograph

The Colorado River District, which includes the Roller Dam on Interstate 70, covers 15 counties and works to conserve, protect and develop water in the Colorado River Basin in western Colorado.

Interstate 70 runs throught he Beaver Tail Tunnel in DeBeque Canyon seen during a flight. The Roller Dam and the Highway 65 exit into Plateau Canyon can be seen on the right side of the photograph.

The Natural Resources Conservation Service found the statewide level of Colorado snowpack is higher than normal for this time of year. Interstate 70 runs through the Beaver Tail Tunnel in DeBeque Canyon as seen here during a flight. The Roller Dam and the Highway 65 exit into Plateau Canyon can be seen on the right side of the photograph

While the Mesa County Board of Commissioners isn’t taking a formal position on a proposed tax hike for the Colorado River District, two of the three commissioners say they personally support the measure.

“As the Western Slope we’ve got to come together to raise some money to at least do some (water) conservation projects and help our own cause. Nobody else is going to do it for us,” Justman said.

Said McInnis, “I support (the tax proposal) personally. The river district is our guardian angel, here on the Western Slope, of water rights.”

Pugliese said that she has a history of generally not backing tax increases.

“I understand that this (ballot measure) is important for water. I just think that it comes at a time where there are homeowners who are currently struggling with the COVID crisis and maybe the timing isn’t the best for a tax increase — not only a tax increase but they’re doubling the mill levy.”

The river district’s proposal would increase its property tax rate to 0.5 mills. Its current levy is capped at 0.252 mills and its effective current rate is 0.235 mills. The proposal would increase the district’s annual revenue by nearly $5 million and cost an additional $1.90 per $100,000 in residential property value, and $7.70 per $100,000 in assessed valuation for business property.

The district covers 15 counties and works to conserve, protect and develop water in the Colorado River Basin in western Colorado. It is seeking to reverse financial impacts from declining energy industry revenues and the effects of the Taxpayers Bill of Rights (TABOR) and Gallagher state constitutional amendments. But it says only 14% of the new revenues would be used to address those impacts. It wants to use most of the money to partner with others on projects focused on agriculture, infrastructure, healthy rivers, watershed health and water quality, conservation and efficiency. The tax proposal comes at a time when long-term drought and population growth are putting more stress on water supplies in the Colorado River Basin.

The tax measure has picked up support from agricultural trade associations; conservation groups; chambers of commerce in Grand Junction, Fruita and elsewhere; and other organizations that locally include the Grand Junction Economic Partnership, Club 20 and the Ute Water Conservancy District. While some county commissions within the river district have endorsed the measure, that hasn’t happened in Mesa County, home to the most voters of any river district county.

Pugliese said the Mesa commission’s normal policy is to not take positions on other entities’ tax hike measures.

“I don’t think it’s appropriate for us to deviate on this issue,” she said.

McInnis is the commission’s chair. Despite his personal support for the measure, “we have to be very cautious as a county when we take a position,” he said.

He said the county ranks tops in the river district when it comes to the quantity and seniority of water rights based in the county.

“Those who don’t have it always want more from those who do have it,” he said.

One hesitation he has when it comes to the tax proposal is the support it’s getting from certain organizations.

“I’m not sure what the motivation of some of those organizations is,” he said.

McInnis said he would guess such groups haven’t been supporters of water projects. He believes some backers of the tax measure favor keeping water in streams as a priority over agricultural uses that he said need to be protected.

“Whatever water we keep in the streams of course goes down to California,” said McInnis.

“…Although the river district has assured me that they haven’t made any kind of agreement with those organizations as to what they get out of the deal (by supporting the tax) I’m not confident to have the county as a whole endorse it,” McInnis said.

The Grand Valley Audubon Society also supports the tax measure. In a letter to the editor in The Daily Sentinel Wednesday, Nic Korte, conservation chairman for the group, said that “all Western Slope residents, whether their prime interest is wildlife or agriculture,win when water is kept within the Colorado River Basin.”

He said approval of the measure is expected to maintain the infrastructure and water rights for the Shoshone Power Plant in Glenwood Canyon and the Grand Valley Roller Dam, which diverts water for irrigation locally.

”In both cases, these projects help maintain a reliable administrative framework for keeping water flowing to the West Slope,” Korte wrote.

McInnis said Mesa commissioners also are uncomfortable that counties such as Pitkin County get the same amount of leverage on the river district board as Mesa County despite having much less in the way of water rights at stake. Each county commission appoints one representative to the board.

“That board is … a big concern of Mesa County — the makeup of it,” he said.

Officials there say the tax measure’s ballot language lacks specific commitments they would like to see regarding how the money would be used. As with Mesa commissioners, Pitkin commissioners sometimes have been at odds with the river district, but for different reasons. Pitkin County has emphasized goals such as keeping healthy flows in streams and rivers, and has viewed the river district as at least traditionally being focused on developing water resources.

‘NOT A LARGE ASK’

McInnis said while the Mesa County commissioners don’t have the comfort level to “go all in, so to speak,” by endorsing the tax measure, the district does need more funding.

“It’s not a large ask. They haven’t asked for anything in a long time,” he said.

“No timing is good timing for an increase but we’ve got to do it,” he said in discussing his own personal support for approving the measure.

He said the river district long has been “outgunned” by Front Range water utilities. “This isn’t going to be a significant change but it’s still some help in the right direction,” he said of the amount of money the district is seeking.

The river district long has worked to limit the amount of West Slope water diverted to the Front Range and seek mitigation of impacts where diversions occur.

At the same time, it also is focused on Colorado River water use by Lower Basin states such as California, and concerns that factors such as continued drought could lead to a call on Upper Basin water by downstream states to satisfy the conditions of an interstate compact, which would curtail Upper Basin uses. The district likewise is focused on trying to ensure that any Upper Basin efforts to manage water demand in a drought to help ward off a compact call don’t result in big impacts to Western Slope agriculture and local economies.

Justman, who owns a farm and previously served on the river district board, cited the need to protect the high amount of senior water rights in Mesa County in discussing his support for the tax measure. He also said he recently checked how much in taxes he pays to the river district and was surprised by how small an amount it was, and he’s willing to pay more.

Pugliese said, “I think that at this point even a little tax increase is a big deal for a lot of homeowners in Mesa County.”

Justman said he’s a little disappointed in Pugliese over her position, “but that’s her choice.”

He said he figured that there might at least be some value speaking up about his own in support for the tax increase, even without the county commission as a whole backing it. He hopes the revenue the measure would raise might help pay for things such as lining irrigation canals and improving irrigation systems to boost efficiency and save water. “If we’re not saving water, doing something different down the road here, some people are going to make decisions for us and we’re not going to like what those decisions may be,” he said.