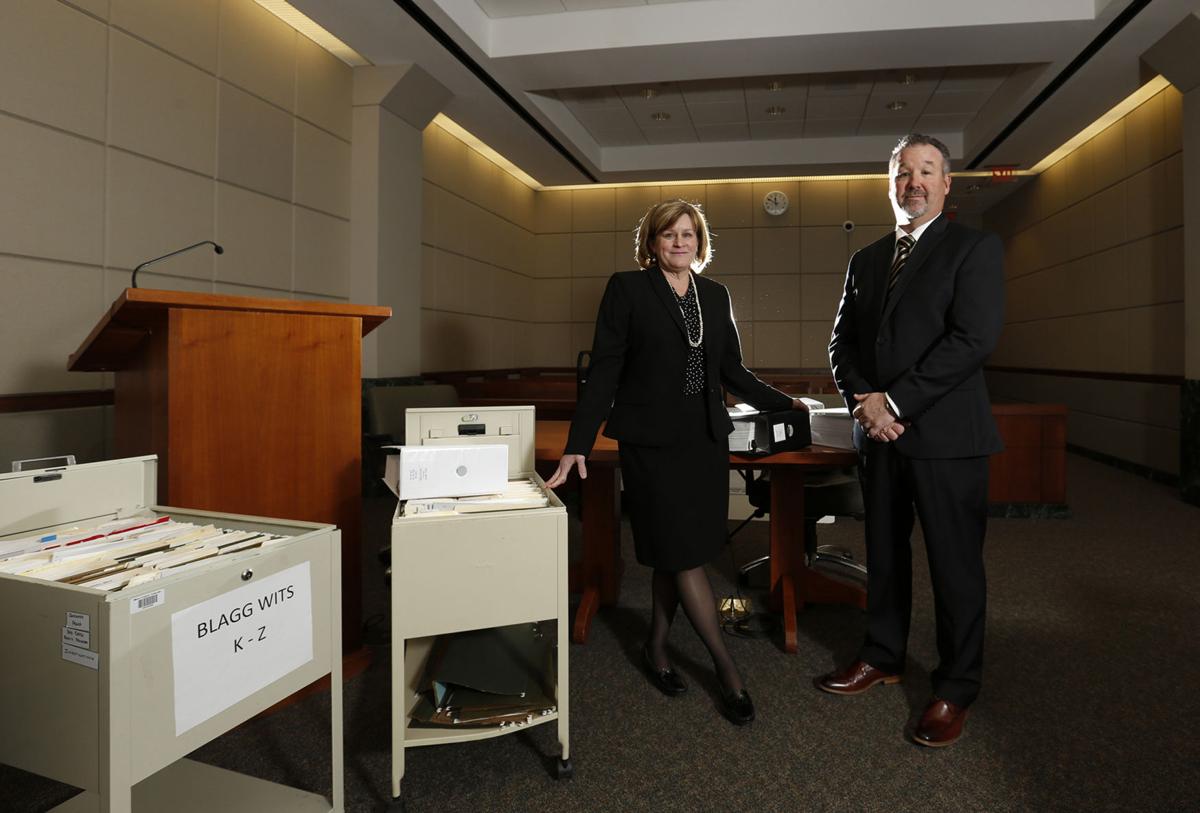 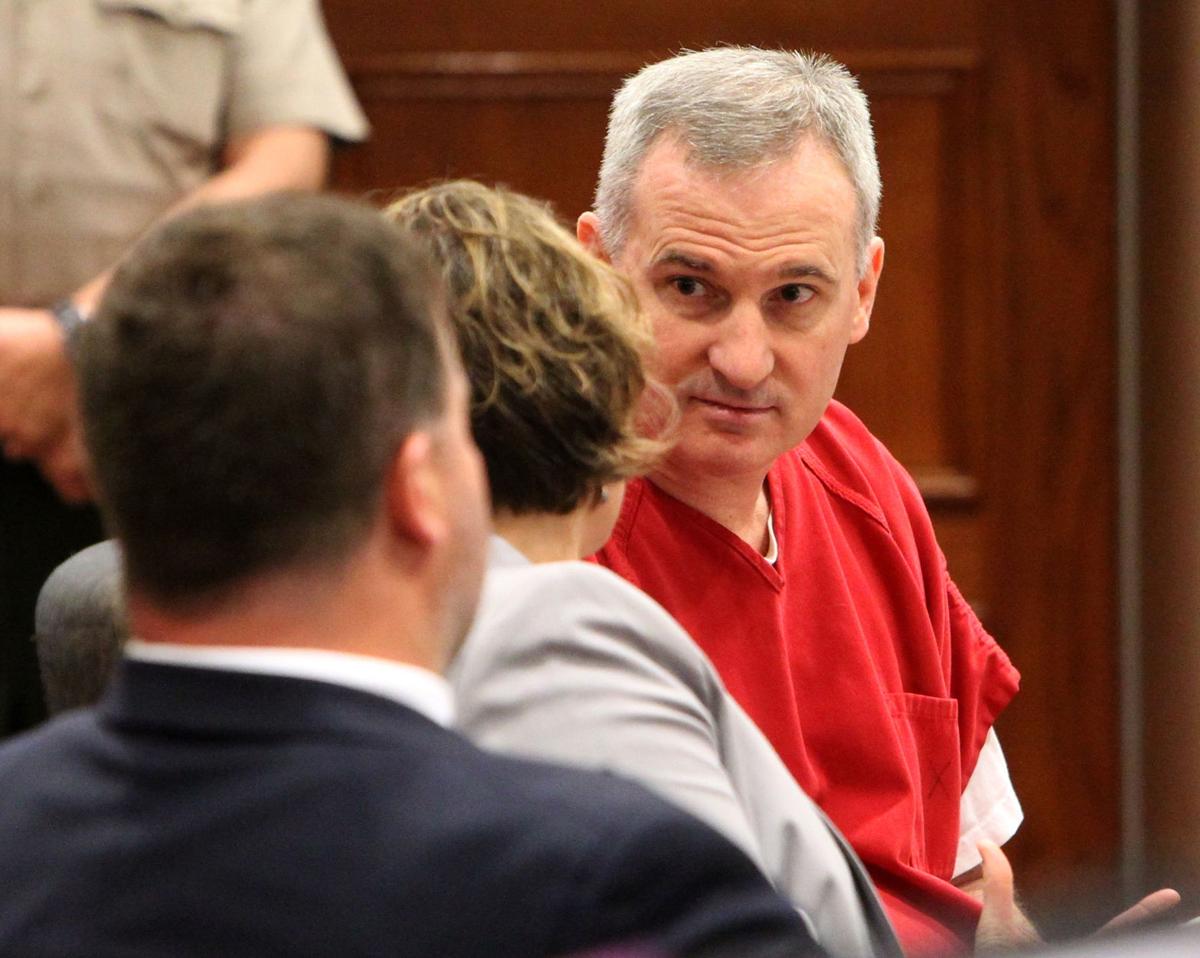 DAILY SENTINEL FILE PHOTO Michael Blagg, right, confers with his attorneys during a hearing in Grand Junction as he attempted to win a retrial in the slaying of his wife, Jennifer. 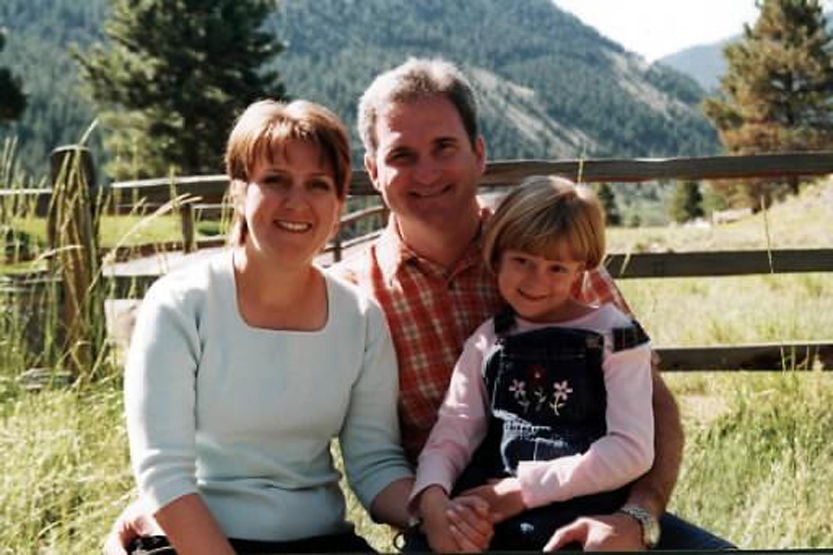 DAILY SENTINEL FILE PHOTO Michael Blagg, right, confers with his attorneys during a hearing in Grand Junction as he attempted to win a retrial in the slaying of his wife, Jennifer.

Much has changed in the 16 years and three months since Michael Blagg called 911 to report his wife and daughter missing from the family's home in the Redlands.

The internet was a novelty. Law enforcement officers recorded interviews on VHS and cassette tapes. And Blagg, a well-educated, seemingly devout Christian who apparently doted on Jennifer, 34, and Abby, 6, was a sympathetic figure.

It's been 14 years since a Mesa County jury convicted Blagg of murdering his wife, whose body was found in the Mesa County Landfill — a conviction that would later be overturned due to juror misconduct.

Since then, much has stayed the same.

Abby's body has never been found.

Blagg, who will face jurors for a second murder trial starting this week, marks his 55th birthday today. He's grayer. He's been incarcerated for years.

But he still says he didn't do it.

Starting Tuesday, Blagg — whose case occupies a significant place in the collective memory of longtime Mesa County residents — will have a second chance to avoid conviction.

Prosecutors will have a second chance to prove his guilt.

When Blagg took his murder charges to trial in 2004, represented by now-retired public defenders David Eisner and Ken Singer, prosecutors pointed to the apparently staged burglary at the Blaggs' home, and Michael Blagg's odd behavior following his wife and daughter's disappearance. They pointed to the area in the landfill where Jennifer's body was found, near trash from Blagg's workplace at the time, Ametek Dixson. They pointed to the Blaggs' marriage problems and Michael Blagg's pornography addiction.

Blagg maintained his innocence throughout the trial, and his attorneys theorized that somebody else had killed Jennifer and possibly Abby, then disposed of their bodies elsewhere.

The jury didn't buy it. After about 10 hours of deliberation, they convicted Blagg of first-degree murder and other counts. He was immediately sentenced to life in prison without the possibility of parole.

The conviction didn't end the case. In following years, defenders made several unsuccessful bids at an appeal.

Then, in 2013, Blagg juror Marilyn Charlesworth stood up before Grand Junction City Council and spoke about her history as a victim of domestic violence — a history she had omitted on a jury questionnaire before Blagg's trial.

Mesa County District Judge David Bottger — who oversaw Blagg's trial and sentenced him to life in prison — agreed with defense attorneys that Charlesworth had deliberately misrepresented her background. Bottger ordered a new trial, prompting public furor over Charlesworth's behavior and the beginning of a process for Mesa County that is perhaps unprecedented in terms of cost.

Former Mesa County District Attorney Pete Hautzinger, who was in office when Blagg was granted a new trial, said he never faulted Bottger for the decision, despite remaining convinced that Blagg's first trial was fair.

"It's a huge waste of time and money, obviously," he said. "At the end of the day it's still Marilyn Charlesworth's responsibility."

Current District Attorney Dan Rubinstein said the case looms large for longtime Grand Valley residents, many of whom turned out to help search for Jennifer and Abby.

"I would say it's the most iconic criminal case in Mesa County," Rubinstein said. "When discussions occur about big cases or burden on the court system or the justice system, and discussion about homicide cases, it is the first case that jumps to everybody's mind."

It remains to be seen how the state's case against Blagg today will differ from the case it presented 14 years ago. Public Defender Tina Fang, who along with defender Scott Troxell is representing Blagg, declined an interview for this story, but reiterated her team's focus on maintaining Blagg's innocence.

"We are spending every waking minute we have at this point focused on getting ready for this trial," Fang wrote in an email. "I really appreciate you covering this story, because it is a story of how people's contaminated perceptions can invade every part of a case. It is a story of how an innocent person gets convicted in America."

Chief Deputy District Attorneys Trish Mahre and Mark Hand declined to comment on evidence in the upcoming trial, but said the case's age will present some challenges.

Attorneys handling old cases regularly have to "find old witnesses who have retired, who have died, who are sick and not able to testify," Mahre said. "People have moved on outside of the Grand Junction and Colorado area. You have to figure out how to find them and bring them back."

The possibility of contradictions from witnesses' prior testimony is always an issue in older cases. And then there's the massive amount of evidence to contend with.

"I've never had a case this large when it comes to the amount of discovery," Hand said.

Logistics of arranging travel and lodging for witnesses are a headache, albeit not one Mahre and Hand have to handle themselves.

"Thankfully we have a strong team within the district attorney's office," Hand said. "Everyone is jumping in when they can to help us out."

Preparing for trial with outdated technology has also been a hassle.

"We're pulling out cassette tapes, VHS players. We're trying to see, do we have equipment that can play it?" Mahre said. "What do we need to convert?"

The drastic technological shift may actually help streamline some testimony that took time during the first trial.

"Interestingly in the first trial, back in 2004, the internet … was new," Hand said. "There was a lot of testimony on what the internet was."

During Blagg's first trial, prosecutors spent hours focusing on pornographic images found on his home computer. Attorneys haggled over how many images — and how much of each graphic image — to show jurors. At one point, Bottger intervened and shut down the display.

It seems unlikely that a similar scene will reoccur; Russell has ruled that prosecutors cannot get into the volume or specific titles of Blagg's pornography collection.

Russell last year also curtailed an attempt by Fang and Troxell to introduce a new potential alternate suspect to jurors: Phillip Bruinsma of Whitefish, Montana, who was recently sentenced to two 100-year prison terms for child pornography and sex assault-related charges. Among Bruinsma's possessions, Jennifer and Abby Blagg's names were found written on sticky notes on a list including details about several other missing girls. But Judge Russell ruled in September that the defense did not make a strong enough connection between the Montana man and the Blagg case.

Given that ruling, Mahre said at a recent hearing that she expects testimony in the trial to last four weeks. In an interview, Mahre gave credit to now-retired prosecutors Frank Daniels and Brian Flynn, who prosecuted Blagg the first time around.

"We're going to put in as good an effort as they did in the first trial," Mahre said. "We have an invested team ready to go."

For more than a decade, the Daily Sentinel has been covering the events surrounding the disappearance of Jennifer and Abby Blagg. Suspect Mich…