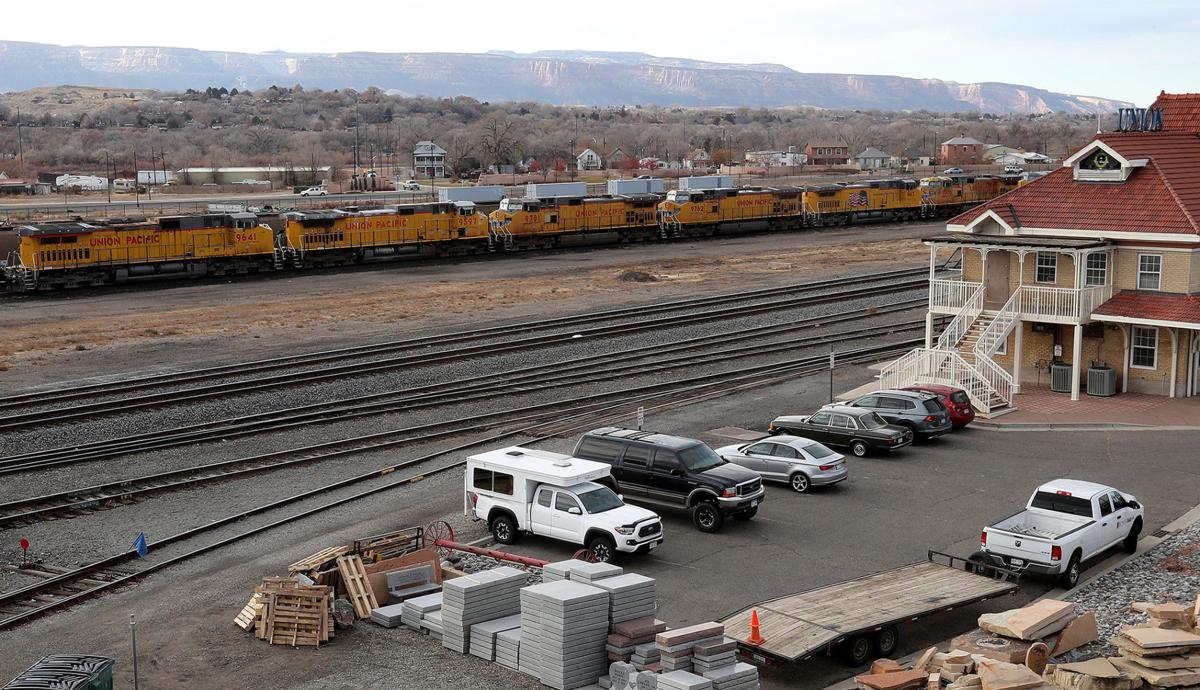 This lot would be one of the stairs for a proposed pedestrian bridge across the railroad tracks and Riverside Parkway in Grand Junction. 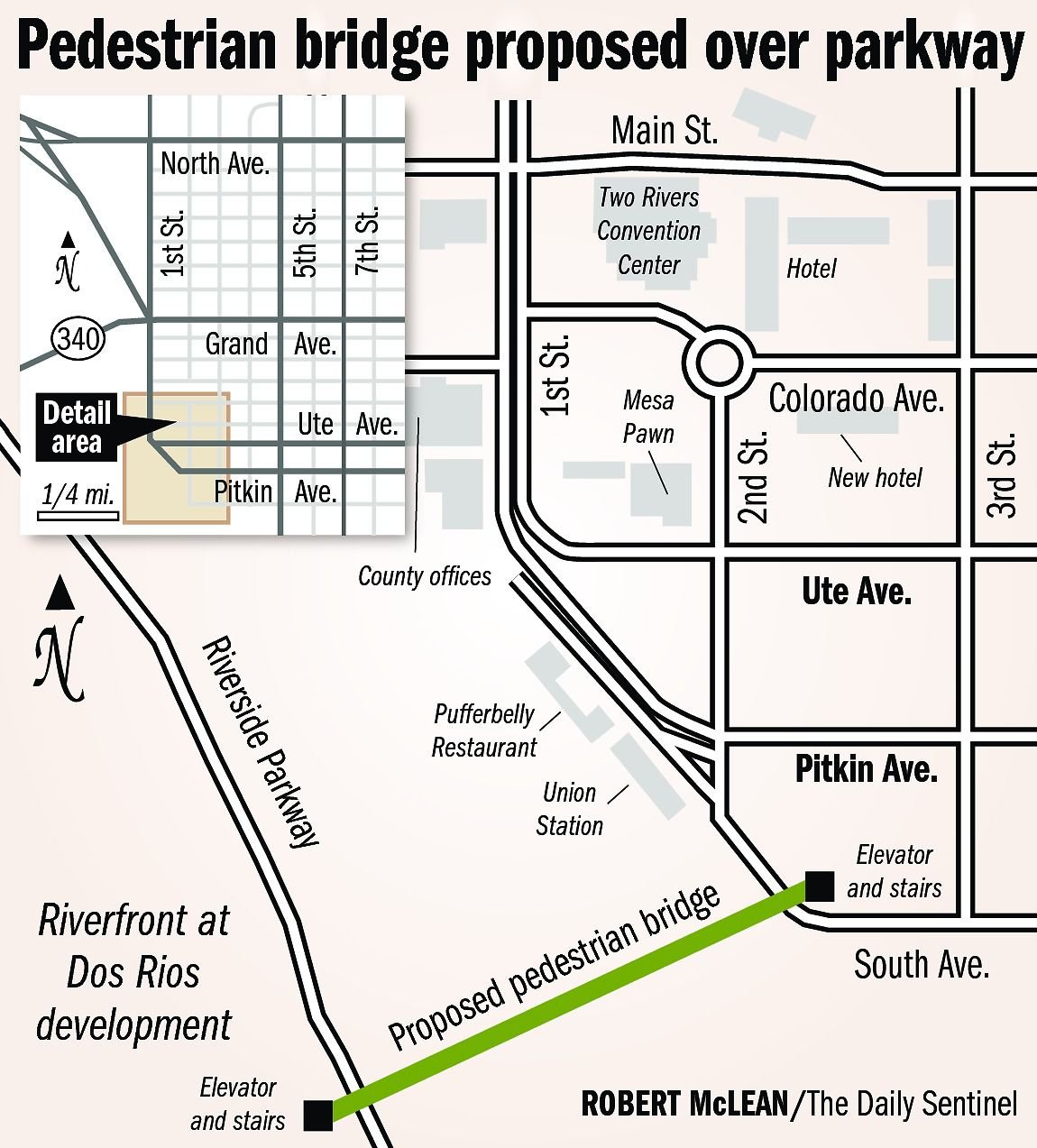 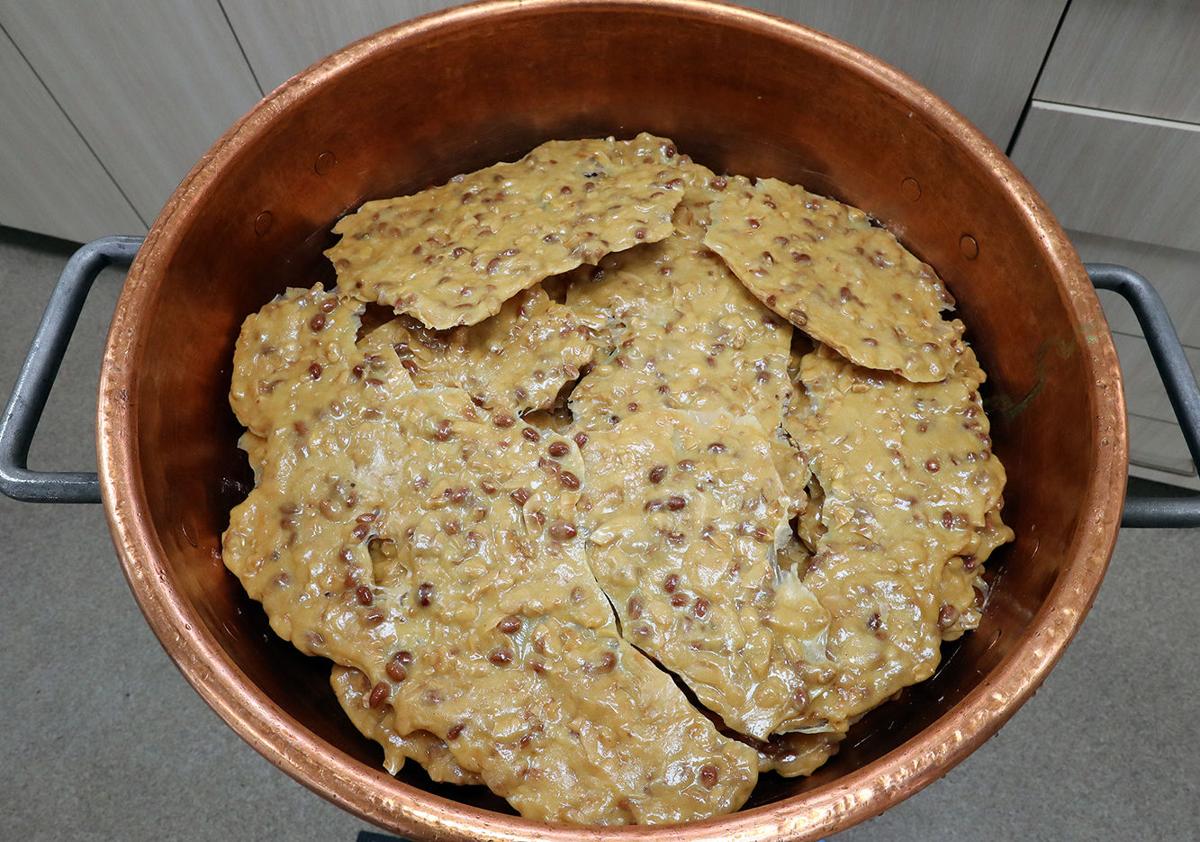 This lot would be one of the stairs for a proposed pedestrian bridge across the railroad tracks and Riverside Parkway in Grand Junction.

There's something standing between the city's ambitious riverfront development and its evolving downtown core.

It's a sprawling yard full of clattering freight trains and four lanes of speeding traffic on Riverside Parkway, but a new front-burner city project aims to bridge the lengthy gap.

The proposed $3.5 million Riverfront at Dos Rios to Downtown Pedestrian Bridge would be built from the south end of the Old Train Depot property, which has a planned rehabilitation of its own, up and over the Union Pacific train yard and Riverside Parkway with another endpoint near the Dos Rios mixed-use development happening on the other side.

Each endpoint of the 12-foot-wide, 900-foot-long span would have a large ADA-compliant elevator that can handle bikes with trailers, as well as people, and an accompanying stairwell. Security cameras, pedestrian lighting and emergency call boxes are planned along the overpass as well.

Attributes aside, there's one aspect of the project that anyone associated with it mentions — connectivity.

After all, what good are all the current hot spots of city development activity — the Riverfront at Dos Rios project, the Las Colonias Business Park nearby, the expansion of the Riverfront Trail system with a connection to the popular Lunch Loops trail head, the expansion of Two Rivers Convention Center and adjacent new hotel — if they're not interconnected?

"With the development of Dos Rios, the development of Second Street and the depot area, this bridge hopefully will provide a safe pathway for bikes and pedestrians between downtown and the riverfront," Prall said about the project.

He envisions the simplicity of directing downtown or Two Rivers visitors to the city's newly activated riverfront.

"Just head down Second Street. There's a bridge there that will take you directly across the railroad and the Riverside Parkway and will drop you down into a really cool development, got a great waterfront, and access to the Riverfront Trail," Prall imagines saying.

"This really is a continuation of Main Street, down Second Street, past the (train) depot, all the way to Dos Rios," Prall explained.

More narrowly, the bridge will directly tie what's planned for the Dos Rios area to downtown. A big plaza there is expected to have business and retail facilities as well as multifamily housing surrounding it, if developers are attracted to the plan.

"It would be just a leap of faith, really, without having that piece solved," said Brandon Stam, director of the Downtown Development Authority, about the new bridge and the possibility of new residential development at Dos Rios. The DDA's boundaries include the Dos Rios development, and the organization has pledged some of their future tax-derived funding to build infrastructure associated with the project.

"It's more about getting people to the river. That for me is the most important opportunity that we can acknowledge," said Jen Taylor, who plans to open the Baja-themed El Jet's Cantina + Sky Outpost along the river at Dos Rios.

She plans it to be "a pause point on the river," with an indoor-outdoor cantina, fire pits, hammocks and shade structures, and more than 100 spots available for camping or short- or long-term rentals. She's working collaboratively with city planners on the master site plan for the project, and hopes to open in 2022.

"Fewer people in cars and encouraging bike and pedestrian (access), it clicks a lot of boxes right now," Taylor said. "I think it speaks to the city being progressive and also intuitive with its community."

"That bridge will help to connect to a broad range of housing opportunities," including those planned for the Sky Outpost, Prall said.

The downtown side of the bridge is planned for the foot of Second Street, and the corridor north of there is one teeming with development activity, making the bridge a key cog to revitalization of the area.

Central to that is the expansion of Two Rivers and the addition of a new hotel. Moving down Second, a developer also plans a new brewpub at Ute and Second next to the stalwart Simmons Lock and Key, and just across the Interstate 70 Business Loop is the redevelopment project at the Old Train Depot.

The city plans a new pedestrian-friendly streetscape for those key few blocks along Second Street, turning it into a tree-lined promenade with new signage, art, sidewalks and street furnishings.

"That's always been another big challenge — making sure that the hotels and the convention center connect down Second Street," the DDA's Stam said. "I feel like we have some pretty good concepts that will align really well (there)."

Design and right-of-way acquisition costs are expected to be about $300,000 of the bridge's $3.5 million price tag, and will be treated separately, so city officials are working to get to $3.2 million for the project.

If the city's funding plans come to fruition, much of that will be covered by multimodal grants that are in the application process now.

One grant possibility is via the Multimodal Options Funds program, money distributed through transportation regional planning offices of the Colorado Department of Transportation. Prall said there's $1.7 million headed to the Grand Valley through that program, but numerous community projects are expected to be vying for that money. Project awards are expected this month.

Another city grant application is through CDOT's Transportation Alternatives Program, federal money that will be headed to each of CDOT's regions for projects that include the design and construction of pedestrian and bicycle facilities.

"Right there, if we were to get a million out of each one of those, we're well on our way to … having most of it funded," Prall said.

TAP awards are expected in March, and if grant money materializes and crossing permits are able to be secured from Union Pacific in 2020, bridge construction could start in 2021.

Even before the pedestrian bridge idea picked up momentum, as city planners and the DDA discussed the improvements along Second Street, the difficult issue of getting people across the speedy I-70B elbow at Ute and Pitkin avenues has come up frequently.

It's a tricky situation, as city officials plan for more pedestrian-friendly development in the area, and CDOT, which ultimately controls what happens there, envisions more traffic along the key artery.

"I understand they're trying to project for future growth, but I think it would be really short-sighted not to think of this area how we envision it, and how there's actual, real money going in there," Stam said.

While CDOT hasn't seen a lot of development activity in that spot to this point, things are clearly changing, and the city's preference more and more is for some kind of light there. That likely would be the least disruptive to traffic and could get pedestrians to cross the one-way streets safely.

"I think that is an absolute must — otherwise we're just creating a bridge that's going to be really hard to get to," Stam said, about a possible traffic signal and CDOT's potential warming to the idea.

"That is absolutely still the elephant in the room," he added.