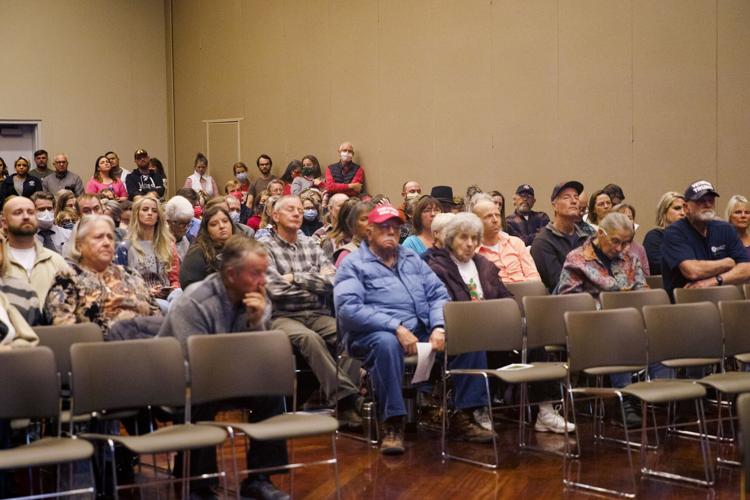 Nearly 200 people gather in the Colorado Mesa University Ballroom for the District 51 school board meeting on Tuesday, Dec. 14. 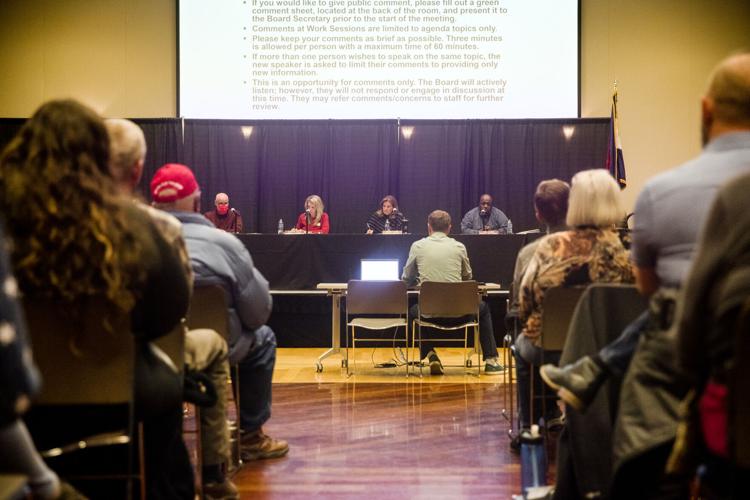 Nearly 200 people gathered in the Colorado Mesa University Ballroom for the recent District 51 school board meeting.

Nearly 200 people gather in the Colorado Mesa University Ballroom for the District 51 school board meeting on Tuesday, Dec. 14.

Nearly 200 people gathered in the Colorado Mesa University Ballroom for the recent District 51 school board meeting.

A surprise — and possibly illegal — move to hire an outside law firm for District 51 resulted in a conversation at the Board of Education meeting Tuesday night about trust and transparency before the effort was ultimately tabled.

As the meeting at the CMU University Center ballroom stretched into its fifth hour, board members debated the merits of approving a contract for Colorado Springs-based Miller Farmer Law Firm for the district’s legal services. The board members unanimously committed to a retreat, to establish a coherent plan moving forward after voting 5-0 to table the vote.

District A representative Doug Levinson said he found out about the potential change from a local attorney who called him Friday night. District B representative Kari Sholtes was equally surprised when she learned of the business item.

Because some new board members appear to have unilaterally communicated and reached an agreement with Miller Farmer Law Firm without discussing it in a public meeting first, the attempt to hire the firm violated Colorado’s Open Meetings Law, according to Denver lawyer and Colorado Freedom of Information Act Coalition President Steve Zansberg.

“It seems pretty clear-cut that three members of this local public body discussed public business outside of a public meeting, and that violates the Open Meetings Law,” Zansberg told The Daily Sentinel.

The action item included an “engagement letter” that had already been drafted and signed by Brad Miller of Miller Farmer Law. The letter explained the scope of services Miller Farmer Law would provide as well as hourly rates. According to the engagement letter sent to the district, Bryce Carlson, a senior associate at the firm, would be primarily responsible for engaging with the district. Carlson graduated from the University of Colorado law school in 2018.

John Williams has served as in-house legal counsel for District 51 since March 2020, and the business item to approve the contract for a new law firm caught two of five board members off guard.

“It was disheartening for me as a board member, and I really had to rack my brain around this, to say, ‘How does this happen?’ ” Levinson said. “Our board was re-established on Nov. 30 and days later, less than a week, I see a letter from this law firm in Colorado Springs saying that we’ve requested a proposal and all this stuff. We may end up, at some point, saying, ‘That’s the firm we need,’ but that’s step 20 and we haven’t even done step one to really decide if we’re at a point that we need to be looking for counseling?”

Williams’ contract with the district ends in June. There was no discussion regarding the process to terminate that contract early in order for Miller Farmer Law Firm to come on board.

“I think it’s embarrassing to our community that we’ve thrown out the word ‘transparency’ so often, and what does that look like?” Levinson asked the board.

Board President Andrea Haitz said that she met the firm while she was in Colorado Springs for a Colorado Association of School Boards (CASB) convention, which took place a little more than a week before Tuesday’s board meeting. She said that she encouraged the other board members to reach out to the firm themselves to learn more about it.

“What this really is is an engagement to look at moving forward with a firm that specializes in school boards and school districts,” Haitz said.

Sholtes said that approving a contract for new legal representation so soon would have been a mistake that set the board up for future struggles when it comes to credibility and cohesion.

“I think this is not a precedent we want to set: meeting with someone one week and then, a week later, we’re voting on a contract with hundreds of thousands of dollars,” Sholtes said. “That does not espouse our goals of transparency, public input and financial responsibility.”

Another concern raised by board members as well as audience members was that the district’s legal services would not be based on the Western Slope.

“We’ve taken such pains over the years to go local with our business when possible,” Levinson said. “It’s not always possible, but in this case, I find it hard to believe that we don’t have qualified folks and firms here to do this work ... (D51 Superintendent Diana) Sirko suggested this a couple of years ago that many districts of our size really go with the process of in-house counseling, for a number of reasons, two of which are cost saving and being able to respond to our folks more quickly than a firm.”

Prior to the board discussion, audience members spoke about the issue during public comment.

Stephan Schweissing, an attorney in Grand Junction, told the board that those tax dollars would be leaving the Western Slope to benefit other communities.

“The board will be sending literally tens of thousands of Mesa County taxpayer dollars to Colorado Springs. Virtually all that money will go to ultimately support restaurants, grocery stores, car dealerships, construction companies and all manner of Colorado Springs businesses,” Schweissing said. “That money will simply be removed from Mesa County, never to be seen again.”

Former school board member Trish Mahre, a deputy attorney with Mesa County, raised the issue of cost with hiring an outside attorney during comments she made to the board.

“This is going to cost the district probably a half million to three-quarters of a million dollars to employ attorneys from Colorado Springs,” Mahre said.

Mahre also questioned whether the decision to seek new legal representation was made as a board or by an individual. The engagement letter included in the board’s information packet was addressed to Haitz, who is board president.

“It appears that one board member unilaterally went and sought to retain services,” Mahre said.

Angela Lema defended the move, noting that she’d been in contact with one of the heads of the firm while she was campaigning for the board and that the election of the three new members suggested the community wanted change and that a new legal counsel could provide that.

“Brad Miller specifically came up. I had some conversations with him on the phone back a ways as I was looking at going through the process of campaigning,” Lema told the board, adding that the outside legal representation could be a benefit.

“I believe there is some real merit in having somebody that isn’t local,” Lema said, commenting that someone outside the Western Slope wouldn’t have a “dog in the fight.”

Lema also said that an interaction at the board’s first meeting suggested outside law advice could be an improvement. Specifically, she was referencing a decision the board made to appoint her as the secretary/treasurer, a role that had been held by a non-board member. At the Nov. 30 meeting, there was some dispute as to whether Lema would be required to take meeting minutes as the treasurer/secretary, or if that could be delegated.

“As we were just setting up this board it was a little concerning to me. Mr. Williams had some hesitation and not a lot of clarity on adding a secretary/treasurer as a board position,” Lema said.

Board Vice President Will Jones questioned how information about the board’s hopes to approve a contract for Miller Farmer Law Firm became a point of contention among district staff and parents before those hopes were confirmed by the district.

“It’s a board conversation in an email that only the board gets and you get a phone call from somebody who’s not even involved in it because someone is leaking stuff, or giving stuff or sending stuff to whoever, that’s not fair,” Jones said.

Emails sent to and from District 51 Board of Education members are public information.

The three new board members agreed to table the proposal but expressed their desire to act sooner rather than later when it comes to the district’s legal services. Sirko said that she was told to hold off on scheduling the board’s retreat, making her nervous that such a retreat might not come to fruition, which would further muddle the waters of the board’s path forward.

Cloudy in the evening, then off and on rain showers after midnight. Low 57F. NW winds shifting to ESE at 10 to 20 mph. Chance of rain 50%.

Inspiring the next generation