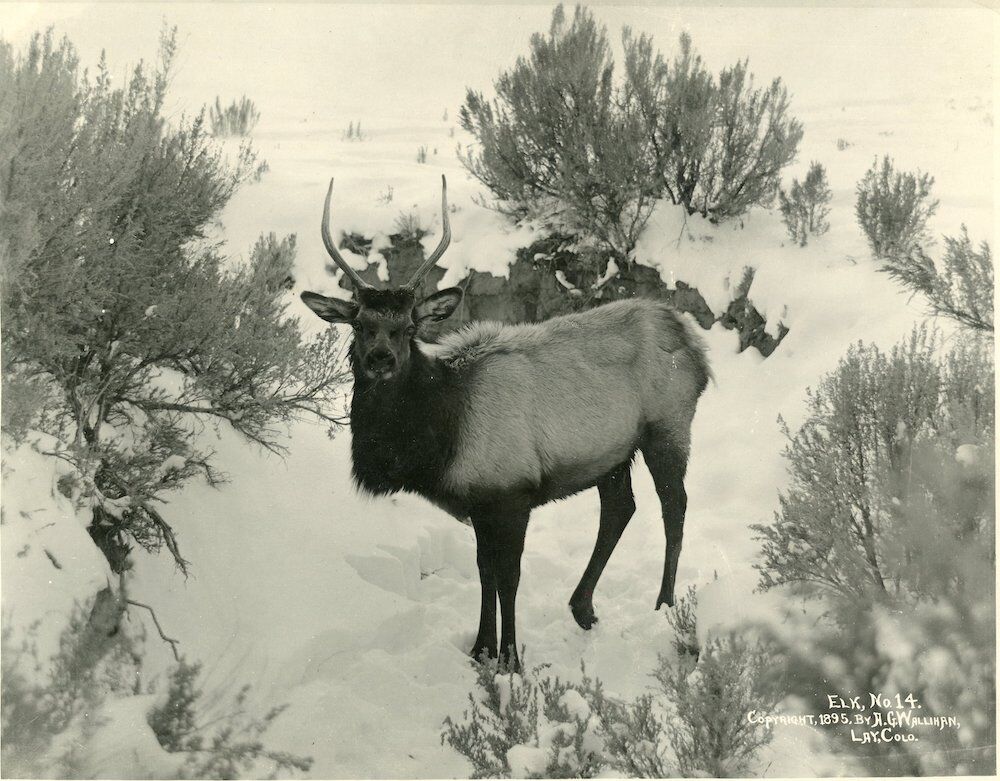 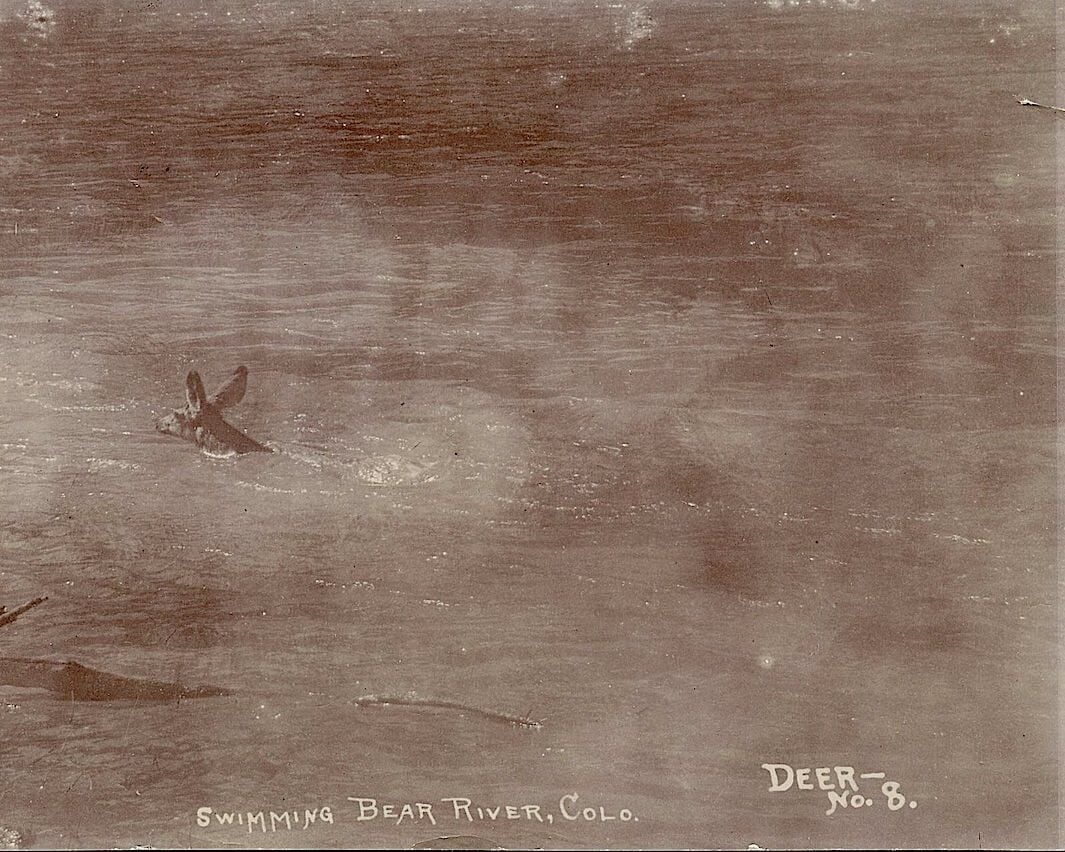 A.G. Wallihan took this photo of a doe mule deer swimming the Yampa River in the spring of 1891. 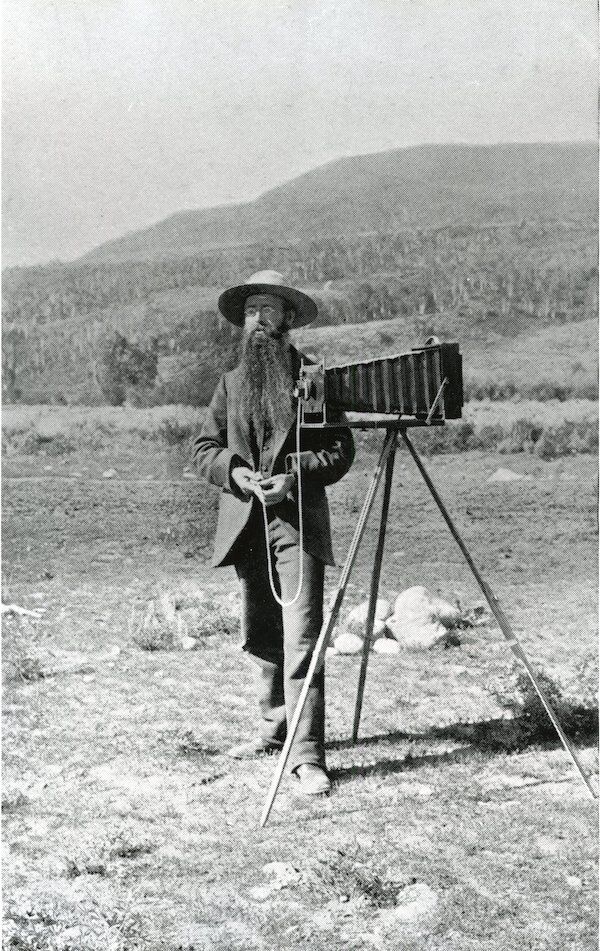 Photos from Museum of Northwest Colorado in Craig

A.G. Wallihan with his camera. 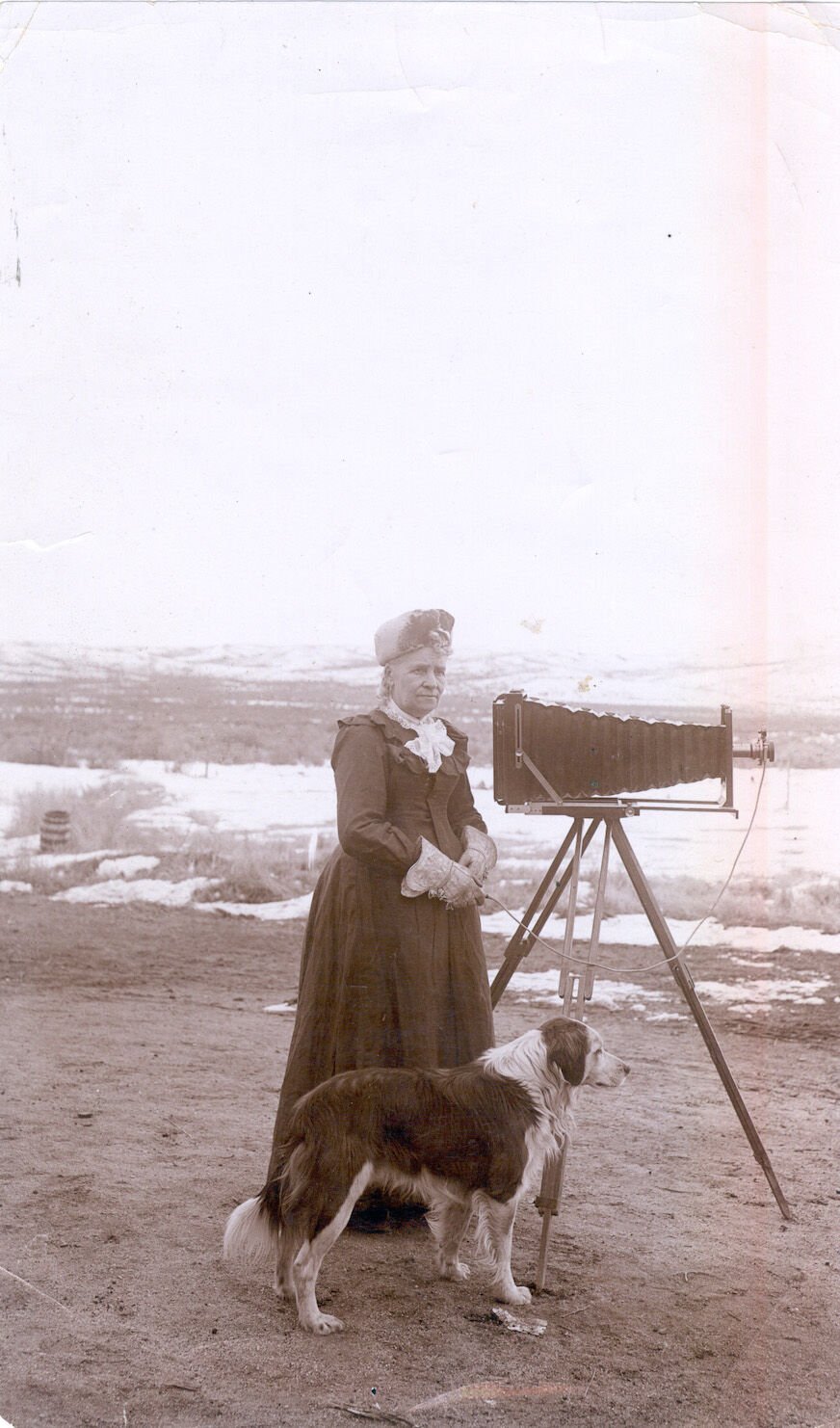 Augusta Wallihan with her camera and dog.

A.G. Wallihan took this photo of a doe mule deer swimming the Yampa River in the spring of 1891.

Photos from Museum of Northwest Colorado in Craig

A.G. Wallihan with his camera.

Augusta Wallihan with her camera and dog.

In the spring of 1891, A.G. Wallihan lugged his heavy box camera and tripod down a steep trail into Juniper Canyon on the Yampa River. There he took one of the earliest photos ever made of a wild animal in its natural setting.

“I sat upright on the gravelly edge of the river, without anything to hide me,” Wallihan wrote in his 1894 book of unstaged wildlife photos – among the first such books published.

“A yearling doe came down and after drinking and satisfying herself that everything was right she started over,” he continued. “When (the doe was) about twenty steps from shore, she turned to land above me and I took a snap shot while swimming.”

This wasn’t Wallihan’s first wildlife photo. He acquired his camera in 1889, and he took a photo of several mule deer in 1890. But the photo of the deer swimming was published first.

Wallihan was a self-taught photographer, who was also the postmaster in tiny Lay, Colorado, about 20 miles west of Craig. His wife, Augusta, joined him in many of his photographic endeavors. Both were also crack shots with rifles.

Prior to the 1890s, photos of wildlife were usually staged – often animals stuffed by taxidermists, then set in life-like poses.

In the late 1880s and early 1890s, new cameras and lenses became available to the public, including George Eastman’s small, handheld camera. But Wallihan favored box cameras and tripods.

It’s not clear who took the first photos of animals in the wild.

George Shiras III began taking wildlife photos in Michigan’s Upper Peninsula in 1889 or 1890. Unlike the Wallihans, he snapped his photos mostly at night using a flash, often setting up a trip wire so the animals would take their own photos.

In England, brothers Richard and Cherry Kearton began taking natural shots of insects and birds in their nests in the 1890s.

Famed zoologist William Hornaday had no doubt who deserved the title. He believed Wallihan was “the first man in the world to take pictures of wild animals in their native habitat,” wrote former Colorado State Historian Agnes Wright Spring.

Theodore Roosevelt, was equally impressed with the Wallihan photos. In the introduction to their 1894 book he wrote, “It has never been my good fortune to see as interesting a collection of game pictures as those that have been taken by Mr. and Mrs. Wallihan.” Their book, he declared, was “absolutely unique.”

Roosevelt was to remain friends with the Wallihans for years, even having them visit the White House when he was president.

The Wallihans’ photos may have persuaded Roosevelt to make two famous hunting trips to western Colorado – one in 1901 when he was vice president-elect, and one in 1905 while he was president.

Roosevelt’s introduction to Wallihan’s second book, written in 1901, noted that there had been many improvements in wildlife photography since 1894.

However, he added, “Even under favorable conditions, very few men have the skill, the patience, the woodcraft and the plainscraft which enabled Mr. Wallihan to accomplish so much.”

Both A.G. and Augusta Wallihan were born and raised in Wisconsin. But they didn’t meet until they had moved West.

A.G. Wallihan arrived in Colorado permanently in 1876, living first in Leadville, then Colorado Springs, before heading to the Western Slope.

Also in 1885, he was named postmaster for Lay, a position he held until his death in 1935. When he died, he was the longest-serving postmaster in Colorado, and the sixth longest in the United States, according to the Steamboat Pilot.

Mary Augusta Higgins had been born near Milwaukee 22 years before A.G. Wallihan. She married a Civil War veteran and they eventually moved West, traveling in an ox cart to Denver, then eventually to Salt Lake City, according to Dan Davidson, director of the Museum of Northwest Colorado in Craig.

Augusta’s first husband drank heavily, however, and she divorced him in Utah, then moved to Brown’s Park with her brother. There she met Wallihan and they were married in 1885. A.G. grew his long beard to mask the age difference between him and his wife.

In addition to running the Lay post office, the couple operated a telegraph office, boarding house and farm.

In 1889, Augusta encouraged her husband to attempt to photograph some of the wildlife near their home. They traded for a box camera, and A.G. began teaching himself how to take photos and produce pictures from negatives.

In his second book, Wallihan described taking a photo of several mule deer along the White River in October 1890. “I returned home, and upon developing the negative was elated to find it a good one – the first successful exposure I had ever made in my game series.”

But he didn’t obtain another good photo until the following spring, when he captured the deer swimming the Yampa River, which was then known as the Bear River.

After that, he wrote, “A year or two passed with but poor success.”

Eventually, he and Augusta huddled in a tent during a snowstorm along the Yampa River, and spent much of the next day in freezing cold, seated behind rocks near the river until they finally obtained a clear photo of nearly 30 deer.

Their skills continued to improve, and they branched out, producing photos of elk, antelope and other creatures.

A.G. accompanied a hunter from Meeker on mountain lion hunts and obtained numerous photos of cougars, including a stunning shot of a leaping lion that introduced his second book.

There were also bears, bobcats, coyotes, rabbits, sage hens and geese. Their books were popular and the couple’s work won international recognition.

In 1900, a collection of their photos won top honors at the Paris Exposition in France. The collection won a bronze medal at the 1904 St. Louis World’s Fair.

They also became outspoken conservationists, joining Roosevelt in decrying the for-profit hunters who were decimating big-game herds throughout the West.

But fame didn’t persuade the Wallihans to leave Lay, Colorado. They remained there the rest of their lives.

Augusta died in 1922, and A.G. eventually remarried, this time to a woman 20 years his junior. He shaved his beard to appear younger.

Even when he was ill in 1935, the 76-year-old Wallihan refused to go to the hospital in Craig for treatment.

“I’ve lived here for far the greater part of my life and here is where I want to die if my time has come,” he told friends.