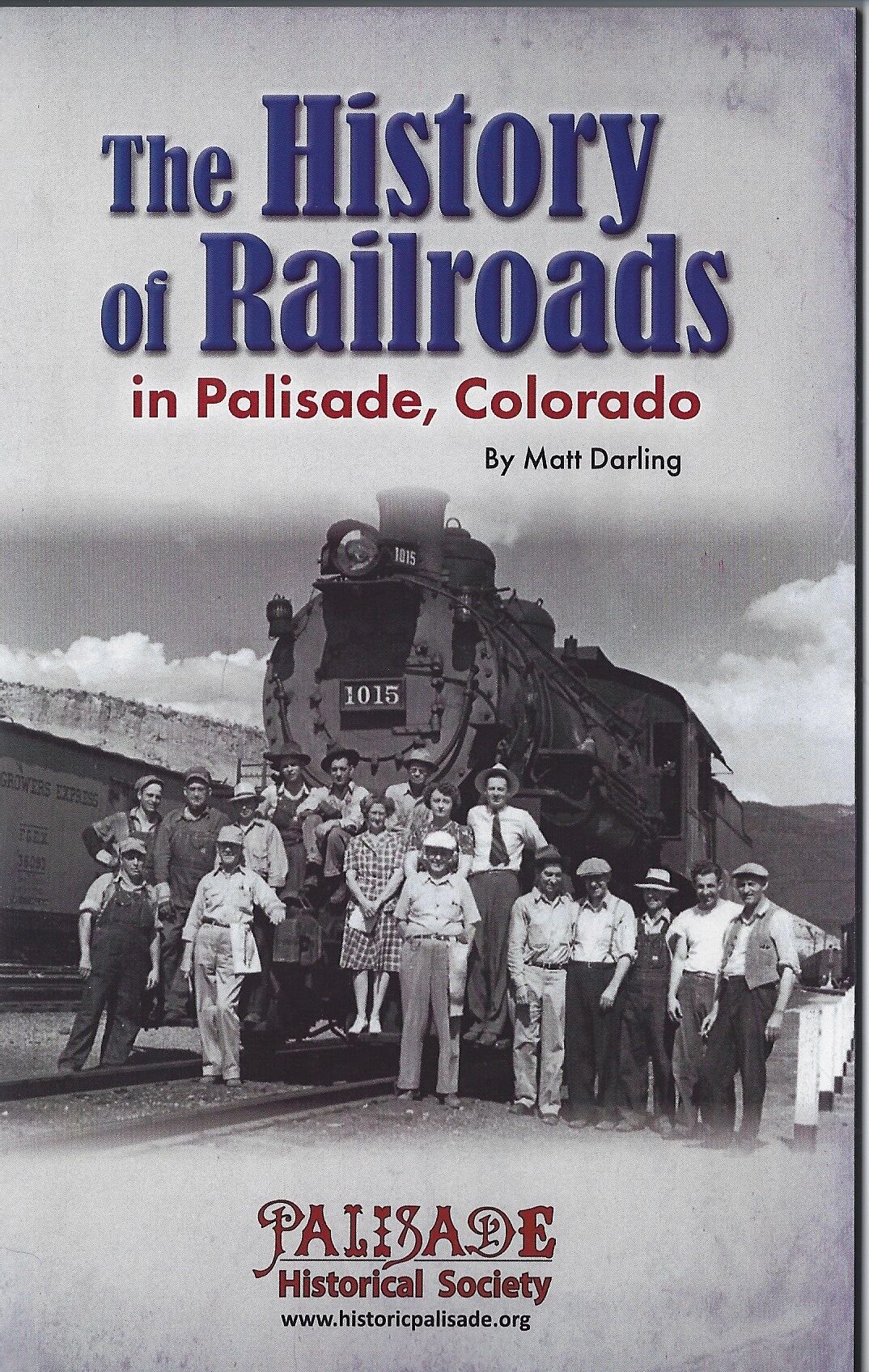 Courtesy of the Palisade Historical Society

The cover of Matt Darling’s book on the railroad history of Palisade. 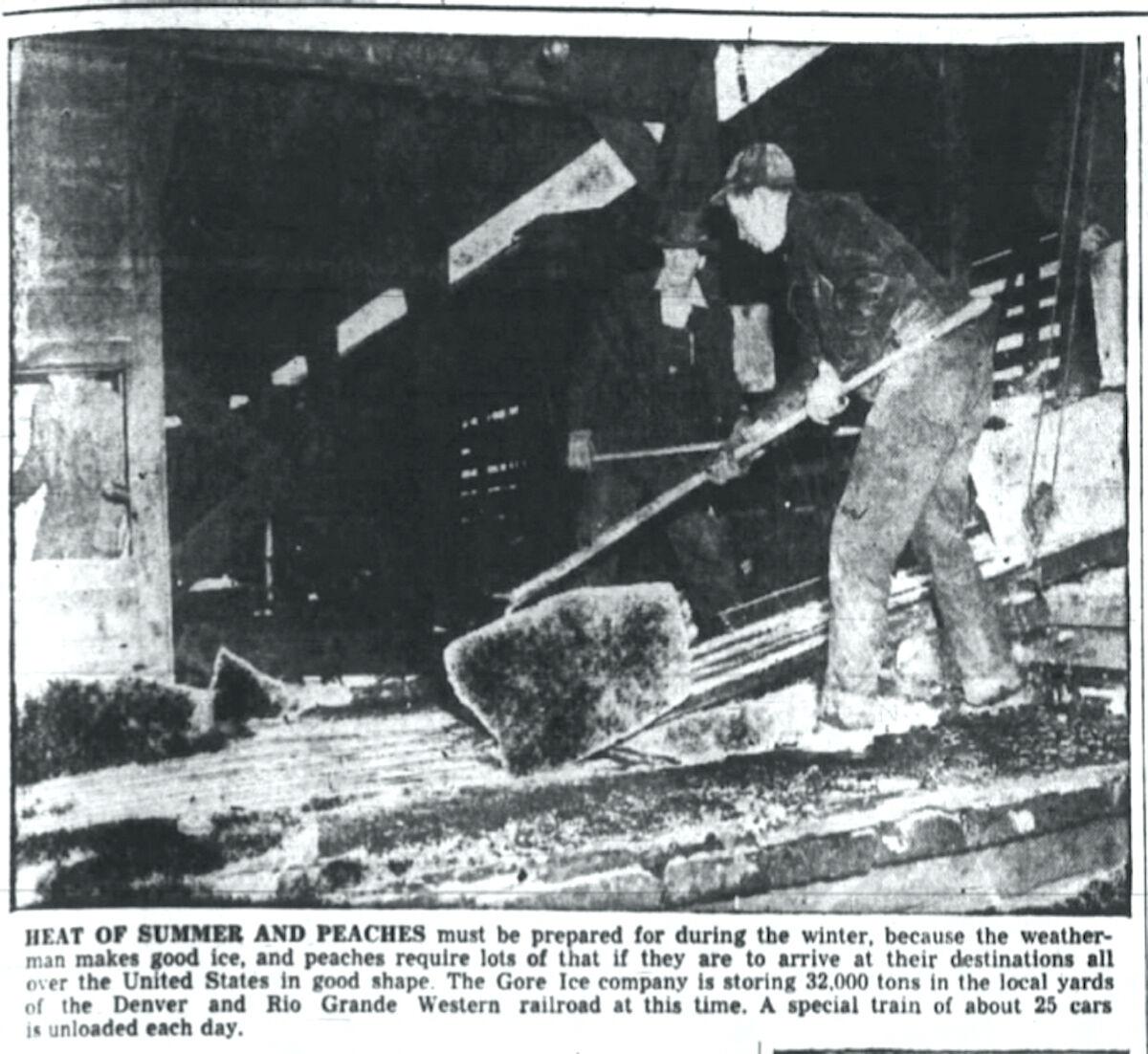 Workers unloaded ice taken from lakes near Kremmling into one of the large ice houses in Grand Junction in this photo from the Jan. 5, 1947, edition of The Daily Sentinel. 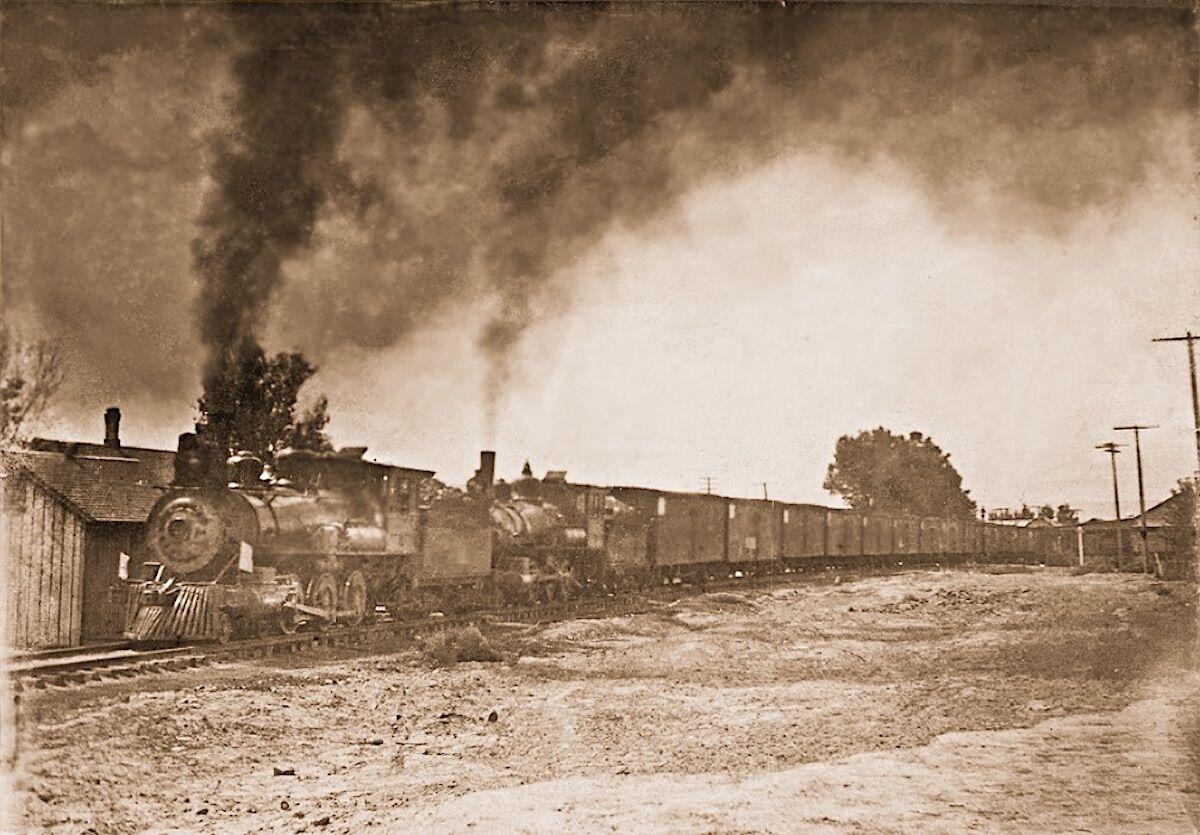 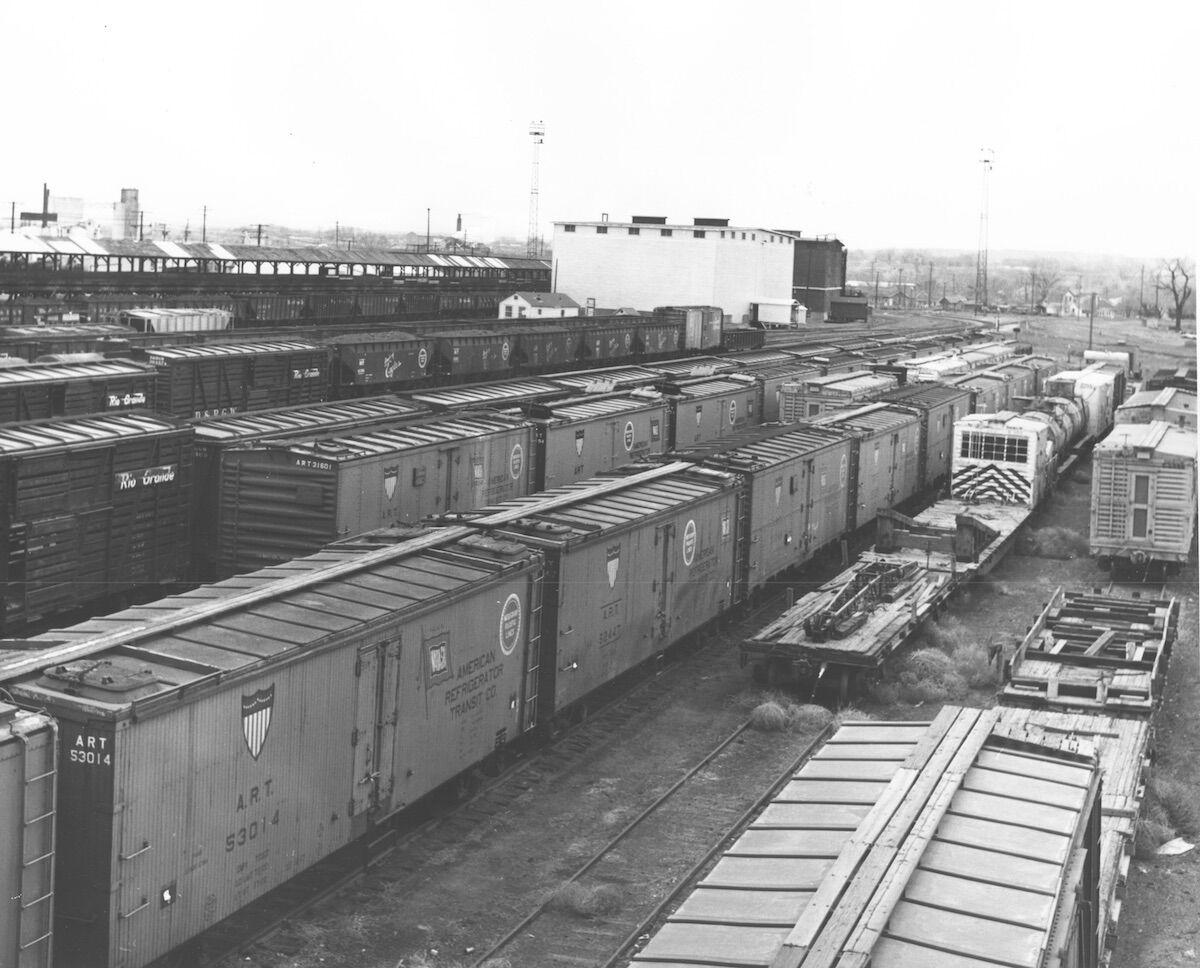 Railyard in Grand Junction circa 1965. Large white building is one of four ice houses, which were no longer in use by the mid-1960s.

Courtesy of the Palisade Historical Society

The cover of Matt Darling’s book on the railroad history of Palisade.

Workers unloaded ice taken from lakes near Kremmling into one of the large ice houses in Grand Junction in this photo from the Jan. 5, 1947, edition of The Daily Sentinel.

Railyard in Grand Junction circa 1965. Large white building is one of four ice houses, which were no longer in use by the mid-1960s.

In January, 1947, fruit growers in the Grand Valley were preparing to ship by rail freshly harvested peaches from Palisade to locations around the country.

There weren’t any fresh peaches in January, of course. That fruit wouldn’t be ready to harvest for another eight or nine months.

But another critical commodity was being harvested that winter and shipped to Grand Junction in preparation for the peach harvest to come.

When harvest time arrived, ice-cooled railroad cars called reefers, “were pre-iced in Grand Junction to ensure the fruit was cooled when loaded into the car,” wrote Matt Darling in his book “The History of Railroads in Palisade, Colorado.” The book was published by the Palisade Historical Society and was released late last year.

“Once the reefers were full, they were taken back to Grand Junction to refill the bunkers with ice before heading east to buyers mainly in the Midwest,” Darling added. “The bunkers were refilled with ice as needed enroute so the peaches would arrive in perfect condition.”

During those years, four huge warehouses, called ice houses, stood near the Fifth Street Bridge in Grand Junction. They were about four stories tall, made with large timbers and insulated with sawdust.

They were necessary to store the vast amount of ice that was cut from mountain lakes in the winter and held until the fruit harvest in late summer and early autumn.

According to a Jan. 5, 1947, article in The Daily Sentinel, a company was cutting ice from lakes near Kremmling that month and shipping it to Grand Junction.

“A total of 32,000 tons will be stored before the cutting is finished,” the Sentinel reported. About 25 rail cars of ice a day were shipped from Kremmling to Grand Junction, totaling more than 1,000 carloads during the 45-day ice harvest.

It’s difficult to understand today just how important the railroad was to this valley, and to Palisade peach growers in particular, during the peak years of peach production.

By the early 1960s, things began to change dramatically. Mechanical refrigeration replaced ice-cooled reefer cars. The vast ice warehouses in Grand Junction and the ice- cutting operations in the mountains were no longer needed.

Additionally, trucks were beginning to replace train cars as the preferred method of hauling fruit. And a devastating hard freeze in the winter of 1962-1963 that killed thousands of peach trees significantly reduced annual production.

“By 1974, the entire United Fruit Growers’ Assn’s shipments totaled 126 railroad car equivalents,” Darling wrote. “After 1975, fruit was no longer shipped via railroad cars, but rather in refrigerated semi-trucks.”

Darling is the curator of Cross Orchards historic site of the Museum of Western Colorado and the museum’s railroad historian.

A native of Boulder County who moved to Mesa County as a young boy, Darling said, “I’ve been studying this stuff since I was 6 or 7 years old. I’m a fourth-generation railroad buff.”

His grandfather and great-grandfather both worked on railroads, he said during an interview last week.

During his years working with the Museum of Western Colorado, Darling has given a number of presentations in Palisade related to the town’s history and its railroad history.

Last spring, when the COVID pandemic shut down so much activity, Priscilla Walker with the Palisade Historical Society contacted Darling and suggested they publish a book based on his presentations.

“About three-quarters of the book is based off my presentations,” Darling said. Members of the Historical Society transcribed some of those presentations, while Darling added new material and edited the earlier information. “It’s kind of a child of the pandemic,” he said.

Peaches weren’t the only important commodities shipped by rail from Palisade.

Coal mined from Cameo to the Bookcliffs was also a big economic enterprise around Palisade for many years.

“Palisade’s dozen coal mines benefited the local economy beginning in the 1890s,” Darling wrote. They also “helped the railroads gain more sources for coal to use in steam engines.”

Several of the larger mines had coal load-out facilities, or tipples, along the main tracks near Palisade.

Trains were equally important for moving passengers from Palisade to other parts of the Grand Valley, around Colorado and across the country.

Sometimes, the trains were used for local commutes, such as the group of Palisade sports fans pictured in Darling’s book, who awaited a train in 1910 to take them to Fruita to cheer on the Palisade team in a high-school competition.

Other times, the passengers were going cross-country on much more important missions, such as the millions of young men and women who boarded troop trains during World War II.

Much of the rail history in Palisade and the Grand Valley involves the Denver & Rio Grande Western Railroad. But that rail line evolved from earlier incarnations, which Darling outlines in his book.

“Early Colorado and Utah railroad history is very confusing,” he said. In his book, he sought to trace that history as accurately as possible “without overwhelming readers.”

That history includes the narrow gauge Denver & Rio Grande Railway founded by William Jackson Palmer, as well as the Colorado Midland Railroad, which competed with the D&RG for several decades.

Both railroads went through several changes in leadership and, in the case of the D&RG, several name changes.

“By 1923, it was finally simple,” Darling said. “There was just the Denver and Rio Grande Western.”

His book looks at Palisade’s railroad history from the early arrival of steam locomotives — which stopped operating here in the mid-1950s when they were replaced by diesels — into the 21st century.

“I like to include the newer part to put stuff into perspective,” he said. After all, he noted, future history “starts today.” History is not just about the distant past.

One thing that’s unique about rail history in the small community of Palisade is that it has some of the longest rail sidings between Denver and Salt Lake, Darling noted.

“The sidings were originally built to handle all the fruit traffic,” he said. “At one time there were six sidings, some of them very long.”

But those sidings soon proved useful for parking trains or train cars, allowing other trains to pass before heading into the relatively narrow confines of De Beque Canyon.

As he wrote in his book, “Coal trains up to 120 cars long must park on a siding long enough for Amtrak or BNSF (formerly the Burlington Northern Railroad) trains to roll by on the main track.”

These days, coal trains aren’t as frequent. But mixed-manifest trains – those carrying a variety of freight – still roll through Palisade on a daily basis.

“A History of Railroads in Palisade, Colorado” is available at the Museum of Western Colorado in Grand Junction, Out West Books in Grand Junction and at Lithic Bookstore & Gallery in Fruita.

Sources: “The History of Railroads in Palisade, Colorado,” by Matt Darling; The Daily Sentinel online at www.newspapers.com; interview with Matt Darling.