Architectural drawing of one building within The Railyard at Rimrock project that's recently been proposed. Photo special to the Sentinel. 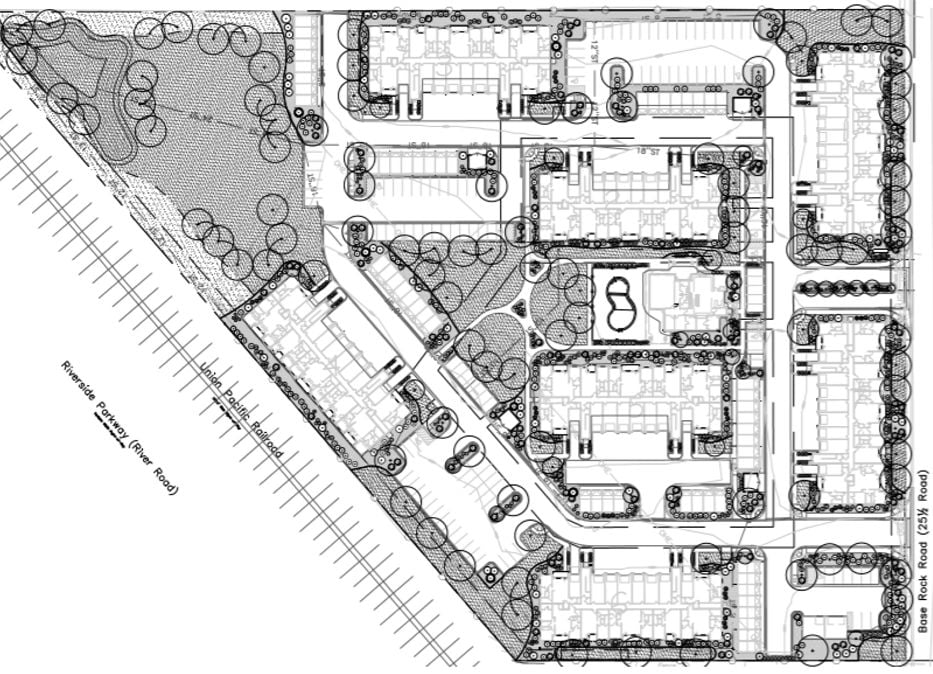 Site plan for the proposed project, The Railyard at Rimrock. Photo special to the Sentinel.

Architectural drawing of one building within The Railyard at Rimrock project that's recently been proposed. Photo special to the Sentinel.

Site plan for the proposed project, The Railyard at Rimrock. Photo special to the Sentinel.

To say there's a need for more apartments and rental properties in Grand Junction is an incredible understatement.

The current rental vacancy rate in the city was measured at just 0.5% late last year by the Colorado Department of Local Affairs, a shocking number as compared to the 12% vacancy rate measured in 2013.

But close to 200 new rental units are bound for the market, likely by next year, with the news that a development partnership aims to build a sprawling new apartment complex just steps from the Rimrock Walmart.

Dubbed The Railyard at Rimrock, the apartment community planned near the intersection of Base Rock Street and American Way envisions seven, 28-unit buildings that include "tuck-under" and direct access garages, according to Lincoln, Nebraska-based Perry Reid Properties.

The company is developing the project in conjunction with another out-of-state firm, Anthony Properties of Dallas, Texas.

Developers say the project will comprise "Class A" apartment units, meaning rents are likely to be comparable to higher-end apartment homes, as opposed to units targeted as affordable housing.

The plan calls for apartment homes of varying designs, with large living areas, lofty ceilings, spacious bedrooms and walk-in closets, according to press about the project. Other details include glass-recycled countertops, top-of-the-line appliances, full-size washers and dryers, and oversized patios or balconies, according to developers.

Other details are targeted as community amenities, like a large central clubhouse with a flat-screen TV, free WiFi and a full business center. Additional resident goodies include a resort-style swimming pool, grill patio, bike storage and repair shop, and a top-flight 24-hour fitness center, developers promise. Managers and maintenance staff are expected to be onsite 24-7 as well.

City planners just recently received developers' plans and are currently undertaking their initial review. The apartment complex plan fits current zoning for the property, so the project is considered an administrative item, meaning it's not expected to be taken up by either the city's planning commission or Grand Junction City Council any time in the future.

Landon Hawes, a senior city planner, said that the city does provide public notice, though, and informs all property owners within 500 feet of the proposed project.

"So if any individual property owners have concerns, then they are certainly welcome to reach out to us, and we can try to incorporate those into our review," Hawes said.

Most of what planning officials are doing now is ensuring that the project is compliant with city code.

City engineers are also a part of the review process, and may be assessing the traffic impacts in the area. While American Way is a wide new roadway that provides connection to the Interstate 70 Business Loop, the adjacent Base Rock Street that becomes Crosby Avenue is narrow and includes a considerable dip in the roadway.

The development group behind The Railyard at Rimrock says that studio, one, two and three bedroom units will be available for rent, and that pre-leasing is expected to begin next summer.