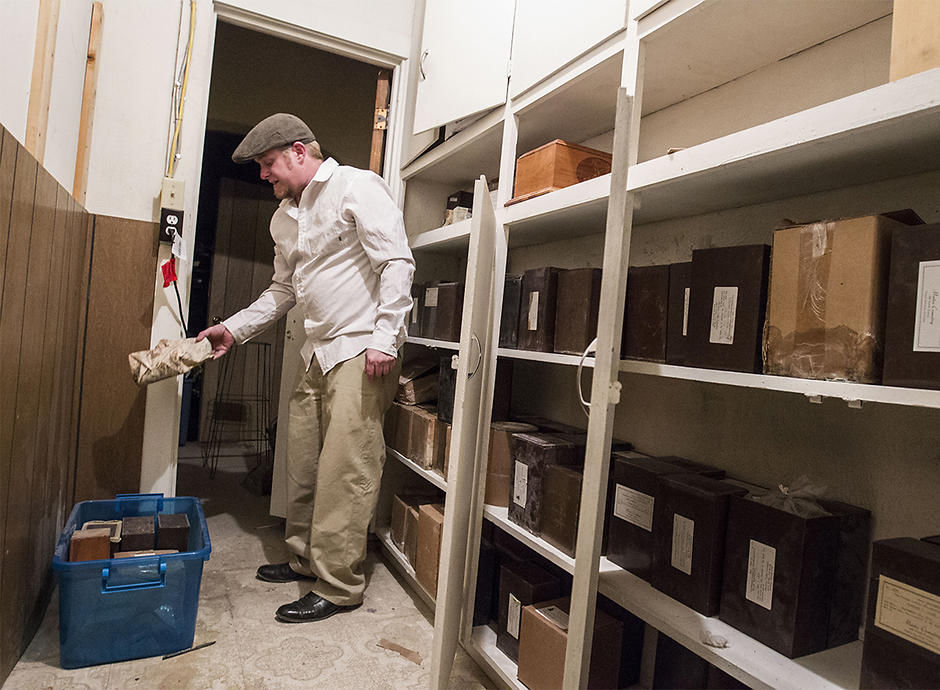 Matt Boyle sorts through unclaimed human remains in boxes on the shelves, which had been cremated and left at the Montrose funeral home for years. Boyle has renamed the business Rose Memorial Parlour and is trying to connect families with the remains. 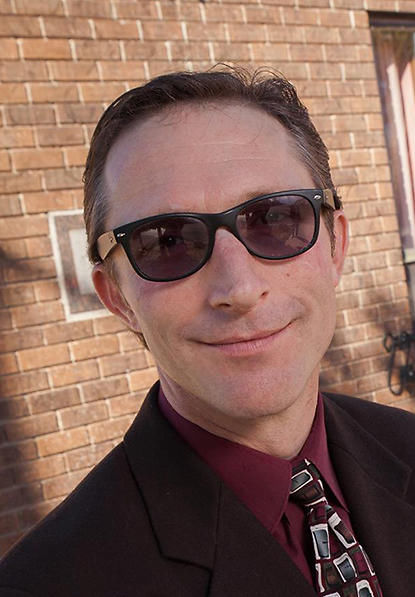 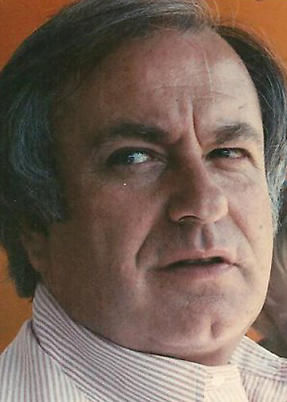 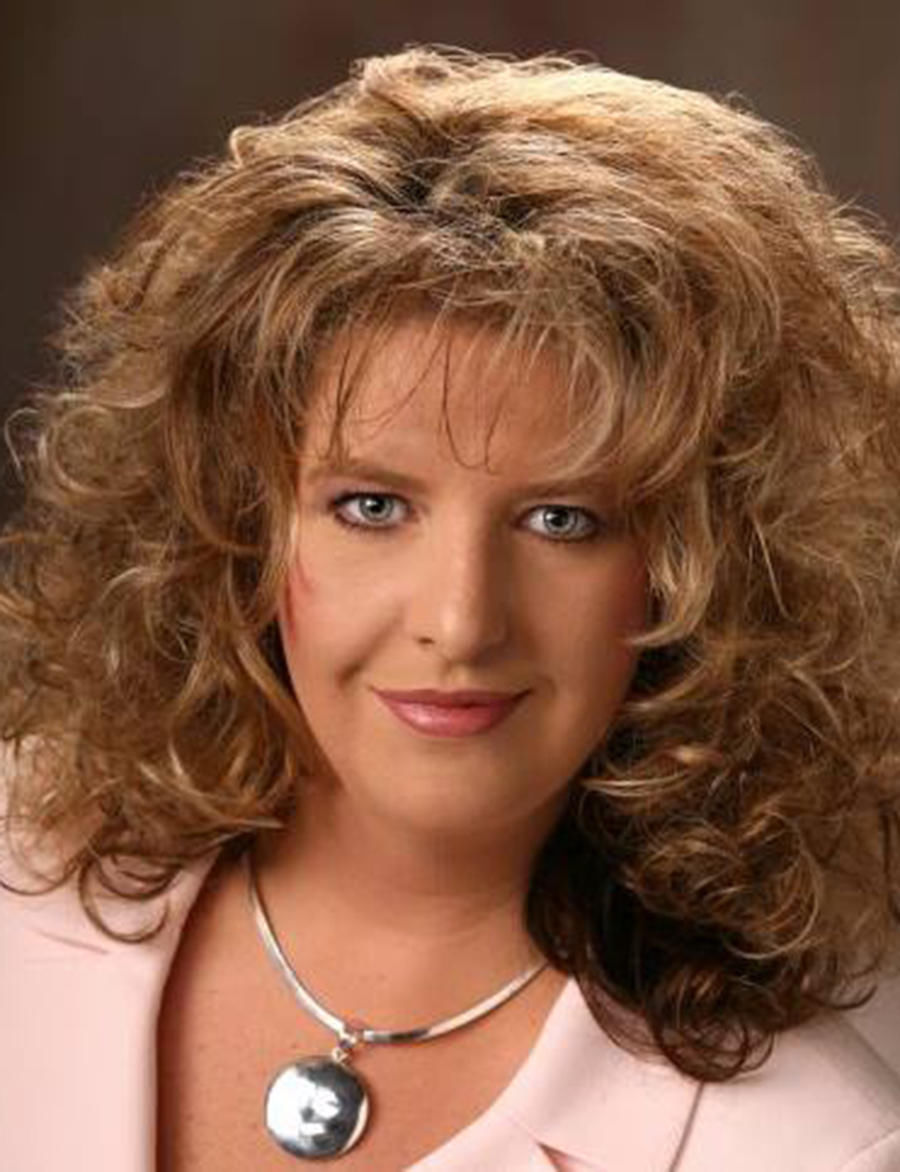 Matt Boyle sorts through unclaimed human remains in boxes on the shelves, which had been cremated and left at the Montrose funeral home for years. Boyle has renamed the business Rose Memorial Parlour and is trying to connect families with the remains.

RELATED STORY: 'Cremains of family’s loved one may actually be kitty litter'

MONTROSE — Baby Boy Weber would have been 48 years old this week.

His grave marker at Valley Lawn Cemetery indicates the place where the stillborn baby's remains should have been since 1968.

Instead, they sat in the dank basement of a troubled funeral business in town, one set of 170 cremains left unclaimed or without their specified disposition.

Baby Boy Weber is one of a few infants in the collection of cremains left in this basement, and the white box containing his ashes was damaged by flooding, leaving it crumpled and caved-in. He has spent the past few decades down here with his deceased companions, sitting in the dark as ownership of the business at 505 S. Second St. changed hands and the relatives of the dead assumed their loved ones were taken care of.

Some of the remains have no name or date to identify who they were, making it particularly hard for the new occupant of the building to try to locate family members and find a resting place for these remains that date back to 1947. Some of the cremains are clearly labeled, in urns or temporary containers. But others don't even have full names, are too damaged by recurring basement flooding to read, or resemble bags of sand with names scribbled in marker.

One specimen was relegated to a Vlasic pickle jar, with only a scrawled question mark on the lid. Others had specific instructions for disposition that were never carried out.

Matt Boyle, who moved Rose Memorial Parlour into the building in October, discovered the cremains during renovations. He and his staff took on the challenge of locating the relatives of the deceased, though it was not their responsibility.

In this basement, there are spouses who died years apart but ended up entombed in the dark, together. There are veterans such as Robert Cash, who died March 11, 1998, and was cremated but left to sit in the cabinet.

There are others like Charlene A. Jim, who died Nov. 8, 1980, who had "scatter in mountains" written on her box of remains, but spent the next 35 years just sitting in the basement.

Boyle is appalled that the former owners didn't follow through with the directions left by family for the cremains.

"In all that time, they couldn't find time to scatter these?" he said. "Those souls know that they're here in this basement."

Boyle, who has worked in the funeral business for 20 years, had never seen anything like this.

"When we first found it, I felt so overwhelmed," he said. "But we're trying to do the right thing, and I think that's giving these people a dignified committal."

Many questions remain, including how this happened, and who is responsible for accepting payment for the specific instructions to inter remains or spread them and didn't carry those wishes out. While many of the business owners who occupied this building are long gone, two state agencies are investigating allegations of fraud and misconduct with a past owner.

Many funeral homes have occupied this space since the first business opened here in 1931, and the line of succession is a spider web of mergers and transfers of ownership. Most recently, the business was owned by Dustin Clark, who abruptly closed down Clark's Valley Lawn Funeral Service and left town in December 2014, leaving the landlord empty-handed after jilting him on rent for months.

Currently, the building is owned by Grand Junction attorney Joe Coleman, Clark's landlord. He acquired the property from the previous owners, Frank and Debbie Tucker, who owned Montrose Valley Funeral Home since 1987.

Coleman knew the Tuckers through the legal world, since Frank was a former district attorney who was convicted of embezzlement.

Coleman initially helped them with some legal issues with the funeral home, but years later, the Tuckers contacted him for financial help and Coleman became financially involved in the business after arranging financing so the Tuckers didn't lose their business.

During their tenure, the Tuckers were investigated for fraud. They reached a settlement with the state after being investigated for selling pre-need contracts without a license, in which they didn't admit or deny the allegations, a Colorado Division of Insurance spokeswoman told the Montrose Daily Press in 2002. A permanent injunction from a Denver District Court judge prohibited them from selling any more pre-need contracts.

"Frank Tucker didn't pay taxes," Coleman said, which led to the IRS seizing property. At that point, "to avoid disrupting the funeral home, I couldn't let them take the hearse and everything else," Coleman said, so he arranged to take care of the debt, indirectly saving the business from a tax sale and little by little, taking on the business, which was eventually conveyed to him to pay the debts.

The financial instability extended to the cemetery also owned by the business, which Coleman attempted to give to the county to resolve unpaid property tax debt. The future of Valley Lawn Cemetery remains uncertain.

Approximately one-third of the cremains in the basement were placed there during the Tuckers' time in the building. While Coleman chalks it up to families just not picking up their loved ones, some of the remains had clear instructions written on them and were not followed.

Coleman didn't know about the remains until he did a walk-through of the property in 2015, after Clark's departure.

When Boyle moved in, he discovered many of the remains were labeled, and he connected with the local historical society and making the names on the cremains public to try to reconnect them with family. Remains not claimed by May 29 will be included in a multi-denominational service at the cemetery.

The Colorado Division of Insurance is investigating Clark's Valley Lawn regarding the sale of pre-need funeral packages, according to spokesman Vincent Plymell. The Department of Regulatory Agency's Office of Funeral Home and Crematory Registration has an open complaint against the business as well, which is pending resolution, according to Cory Everett, chief of staff.

The Montrose County District Attorney's Office has not received any direction to pursue charges against anyone in this case for possible theft or fraud, according to spokeswoman Sherry McKenzie. There are no licenses at stake, since Colorado stopped requiring licensing of funeral directors or embalmers in 1982.

Resolving the issue of the remaining cremains by having a scattering ceremony is within state law, which states that unclaimed remains can be disposed of 365 days from cremation, and directs the funeral director to document the time and place of the disposal and allows them to collect "reasonable costs" if there is an unpaid bill.

For some, the fact that so many remains accumulated over time is unacceptable, and that some of those remains had specific instructions that were not honored is despicable.

Though there are occasions in which there are no relatives to handle remains after someone dies, or the family never picks up a relative, the sheer number of cremains left in this basement is not normal, according to other funeral directors.

Greg Crippin and his brother, Kelly, have owned Crippin Funeral Home in Montrose since 1988, and since that time, they have accumulated approximately 50 unclaimed cremains. Though state law allows the remains to be disposed of, the Crippins keep those remains indefinitely, archiving them in case someone should come along looking for a relative.

"Every funeral home has remains that aren't claimed," Crippin said. "But if we're instructed to take final disposition, we do so. That's the part I don't understand. What's surprising is to not carry out their wishes."

In a business which sells peace of mind, dignity and respect, having the remains of people who wanted to be scattered on a mountaintop sitting in a flooded basement instead is particularly egregious. Others in the business consider it a black eye.

"Unfortunately, I think that this does hurt all funeral homes, because people think that all funeral homes follow the same practices, which is not true," said Chalmer Swain, who has been in the funeral business for 44 years and operates Taylor Funeral Service in Delta.

Swain said his policy is to keep remains for 30 days and then proceed with the procedures allowed by state law. One year after cremation, funeral directors may legally dispose of cremated remains that are abandoned.

Boyle doesn't take the disposition of these human remains lightly, even though he wasn't charged with their final disposition in the first place.

After Debbie Tucker closed Montrose Valley Funeral Home from 2008 to 2014, Clark started Clark's Valley Lawn Funeral Home. He is being investigated by the state for selling pre-need funeral plans, and anyone who purchased a plan from him is asked to contact Caryn Berumen, pre-need investigator with the state Division of Insurance, at 1-800-930-3745.

Clark now works for Metropolitan Mortuary Services in the Denver area. He did not respond to attempts to contact him via social media.

The Tuckers owned Montrose Valley Funeral Home, which operated in the building from 1987 to 2007. During that time, they were investigated for selling pre-paid funeral plans without a license and ended up settling with the state.

After Frank died in 2006, attorney Joe Coleman assumed ownership of the property and leased it to Dustin Clark.

Hess was "Frank Tucker's right-hand-man" according to Joe Coleman. Hess declined to be interviewed over the phone and said she would only respond to questions via email.

She wrote in an email that she worked at Montrose Valley Funeral Home from 2002 to 2006, and was not involved with storing cremated remains prior to that time.

"During my employment with MVFH, cremated remains were labeled and stored properly until the family returned," she wrote, adding that she does not have any unclaimed remains at her current business.

Hess now owns Sunset Mesa Funeral Foundation Inc., which operates Sunset Mesa Funeral Directors in Montrose, Delta Funeral Home in Delta and Colorado Cremation, Inc., under the umbrella of a nonprofit corporation she formed in 2009, according to Colorado secretary of state records. Hess said via email that she has been with Sunset Mesa since 2006 and has been the owner since 2011.

Hess operates eight different businesses under the funeral foundation nonprofit, including Signature Events & Floral and The Sign Company & Secure Shredding, according to state records. The nonprofit corporation is in good standing with the state, though the IRS revoked its 501(c)(3) status less than a year after its formation, according to the agency.

In a story about Colorado Cremation, Inc., Hess told the Montrose Daily Press it was a low-cost, basic cremation service, "whereas my Sunset Mesa operation is a multimillion-dollar business."

Rose Memorial Parlour is attempting to find the families of the 170 cremains found in the basement of the building they are renovating. They are still looking for relatives of these deceased and have provided the dates of death if available. Please contact them at 970-249-4400 if you have any information.

A Montrose funeral home that also operated as a body parts broker has been shut down by the state for allegedly violating several state laws, …