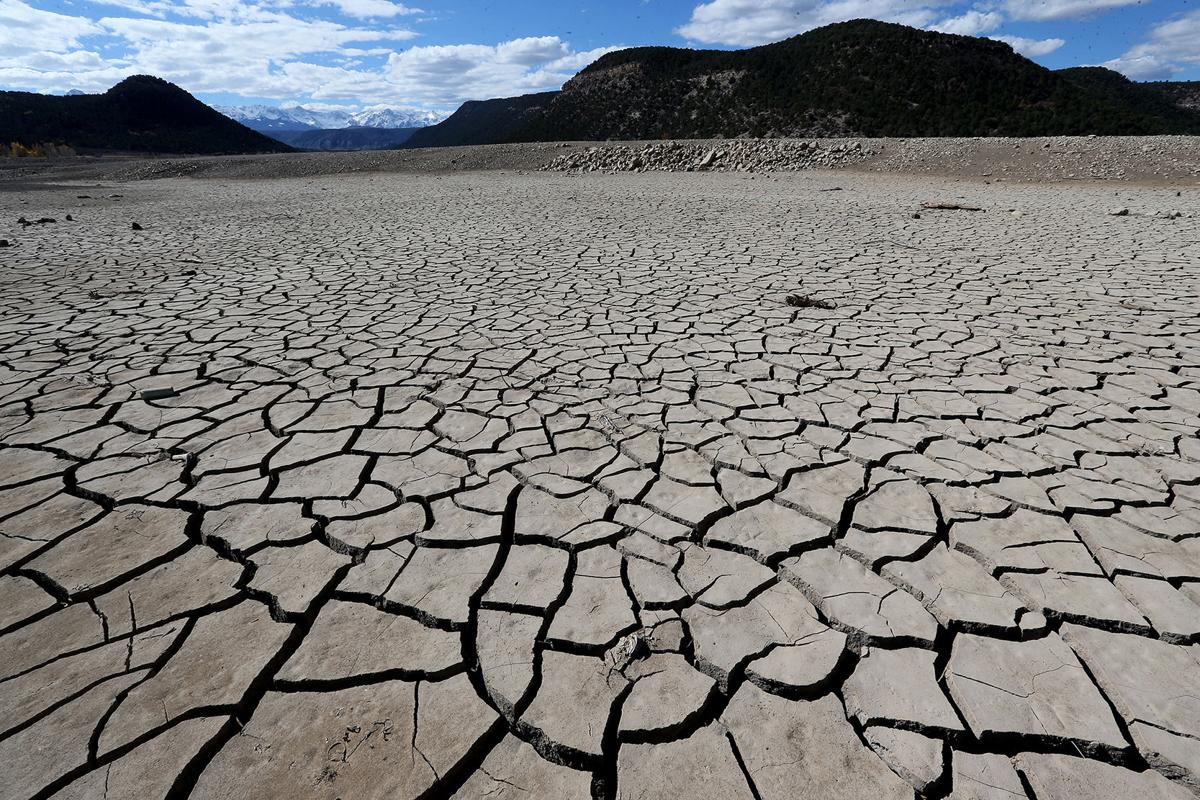 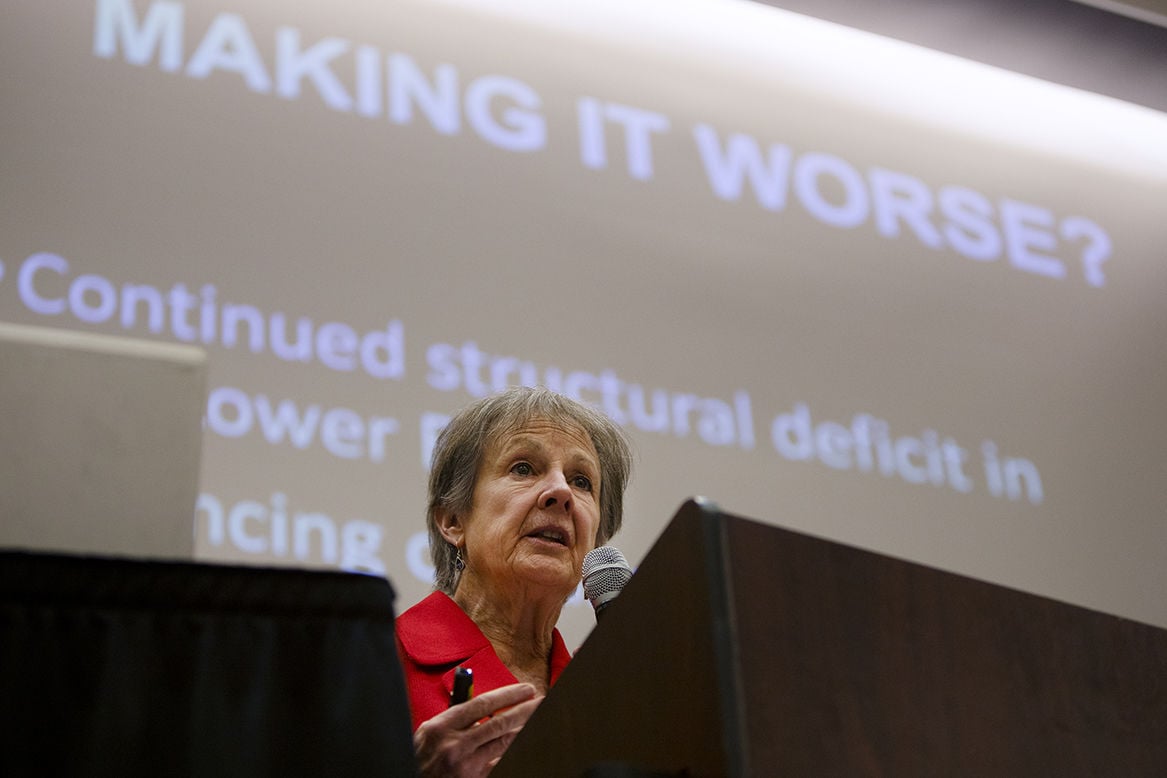 Former Assistant Secretary for Water and Science at the United States Department of the Interior Anne Castle speaks on the curtailment in water uses due to drought and overuse at Colorado Mesa University on Nov. 13.

Former Assistant Secretary for Water and Science at the United States Department of the Interior Anne Castle speaks on the curtailment in water uses due to drought and overuse at Colorado Mesa University on Nov. 13.

Trying to come up with water demand management programs is hard, but the alternative is a riskier future that could involve a forced curtailment of Colorado River use in Colorado, a speaker said Wednesday at Colorado Mesa University.

Castle was a longtime water attorney and served from 2009-14 as assistant secretary for water and science at the U.S. Department of Interior. She now is a senior fellow at the Getches-Wilkinson Center for Natural Resources, Energy, and the Environment at the University of Colorado.

Castle and John Fleck, director of the University of New Mexico Water Resources Program, recently released a report evaluating the risk of future curtailment of river water use in Upper Colorado River Basin states under a 1922 river basin compact. The report discusses the concept of working to take an insurance-based approach to address the risk of curtailment.

"As with any form of risk, you can insure against it," Castle said.

The new paper's issuance comes amidst concern that potential droughts and a warming climate increase the likelihood of a future compact call on the river. That would force reduction in municipal, agricultural and other uses in the state, at least in the case of some water rights junior to the 1922 compact.

Earlier this year, Congress approved legislation allowing implementation of drought contingency agreements involving both Upper and Lower basin states. The agreements are aimed at helping keep water levels in Lake Powell and Lake Mead from falling so low as to jeopardize hydropower production and force water supply reductions. In the Upper Basin, an agreement allows in part for any water conserved by possible demand management programs to be stored in a separate account in Lake Powell to protect the reservoir's water levels.

Colorado and other Upper Basin states since have begun exploring the possibility of pursuing demand management programs. Becky Mitchell, director of the Colorado Water Conservation Board, said at Wednesday's forum that in Colorado, nearly 100 members of work groups have been meeting as the state begins "to investigate just the feasibility of that program."

Colorado is looking into issues surrounding the idea of a possible program involving temporary, compensated, voluntary reductions in use by agricultural and other water users.

Castle said demand management is complex and "not an easy solution but it does give us the opportunity to plan and we can hedge our bets a little bit."

The other option is going without insurance against the risk of curtailment, or "going bare," Castle said.

"Going bare is rolling the dice. It could work but it also could have very significant adverse economic impact," she said.

The curtailment threat derives from the 1922 compact requirement that Upper Basin states including Colorado not cause the flow of the river at Lee Ferry, which is below Lake Powell, to be depleted below 75 million acre feet over any 10-year period. A treaty with Mexico effectively ups that requirement to 82.5 million acre feet.

Castle said a legal question surrounds whether the 1922 requirement not to deplete water means a requirement to deliver it.

"We don't know the answer and this is the underpinning of risk to the Upper Basin," she said.

If it only means don't deplete, the Upper Basin is fine as as long as it doesn't use more than 7.5 million acre feet a year under the 1922 compact, she said. But if it must deliver that much, it bears all the risk of climate change and reduced river flows in future years, she said.

The paper she and Fleck wrote points out that just a repeat of the drought in the first decade of this century could drop Powell levels so low in just four years that its hydropower generation would be threatened, and below those levels not enough water could be pushed through the dam to move 7.5 million acre feet a year downstream.

Meanwhile, climate scientists have projected a 20 to 30% reduction in the river's flows by mid-century, and a 35 to 55% drop by the end of the century.

"Those are conceivable situations that we just don't have any means of dealing with right now," Castle said.

The Upper Basin could go to court to try to to deal with river compact issues, but Castle called litigation "not a basket where you want to put all your eggs."

"Litigation is very high-stakes poker. It is lengthy, it is costly and it is uncertain, and the biggest risk in litigation is that you lose," she said.

She said demand management would have costs, including payments to water users and secondary impacts. Some on the Western Slope want to ensure that temporary cutbacks in use aren't borne disproportionately by agricultural users, harming rural economies.

Castle said the costs of curtailment need to be considered as well, and those costs could be greater, could last longer and potentially can't be planned for.

But Castle and Fleck note in a white-paper, summary version of their report, "While that might sound superficially attractive to West Slope agricultural interests, such a prospect could motivate affected municipal water providers to buy or lease pre-Compact West Slope irrigation water rights, possibly in substantial volume. Although these would almost certainly be market-based, arms-length transactions, the resulting economic impact could be geographically concentrated and tremendously disruptive to commodity supply chains and rural communities."

The white paper says that when it comes to demand management, "There are many barriers — legal, operational, economic, and political — that must be addressed. While it is not clear that a demand management program is the right, or the only, appropriate form of contingency plan, it does seem to be the only viable insurance policy proposed thus far."

The full report may be found at https://papers.ssrn.com/sol3/papers.cfm?abstract_id=3483654. The white paper is available at https://www.getches-wilkinsoncenter.cu.law/wpcontent/uploads/2019/11/Summary-of-Risk-Assessment-White-Paper.pdf.