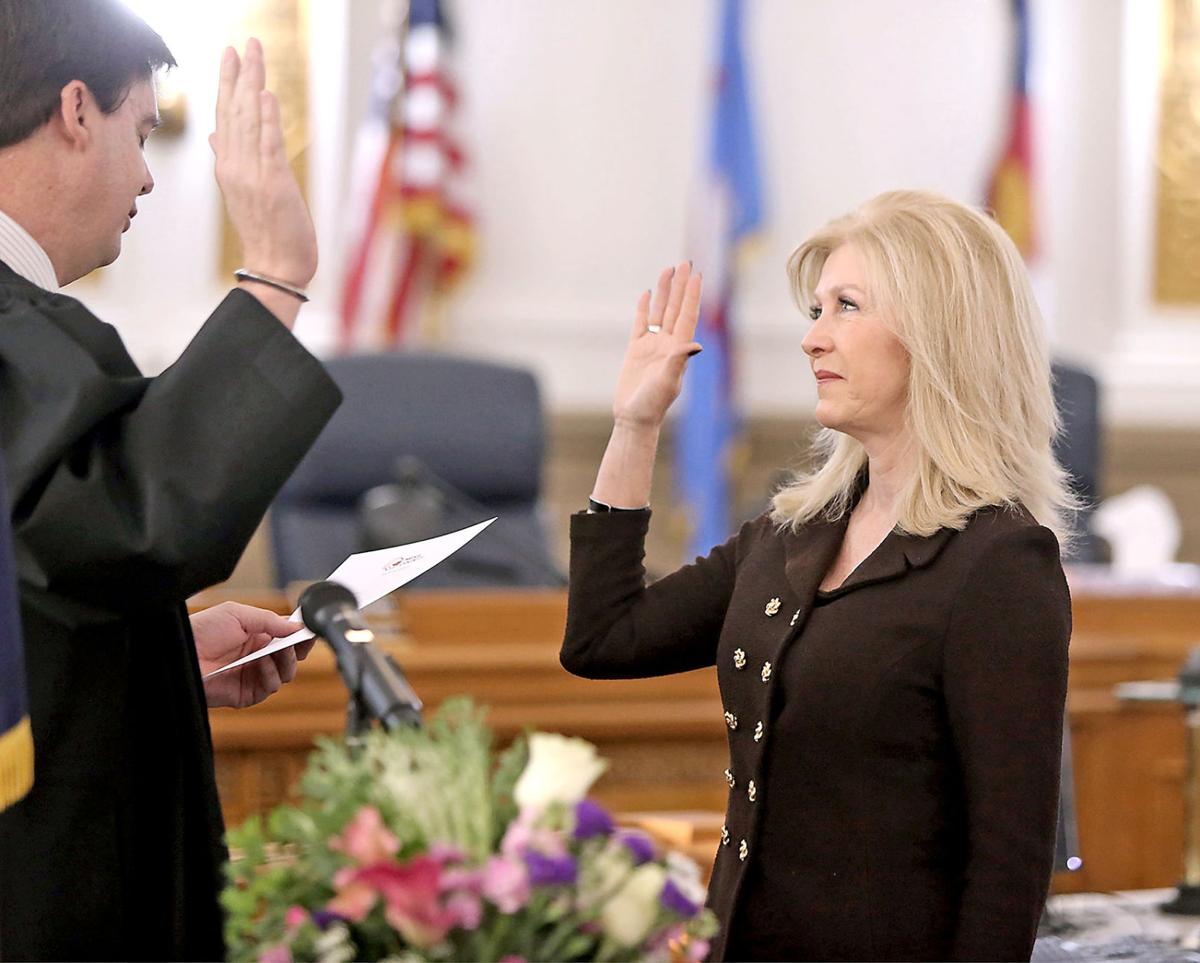 Mesa County Clerk Tina Peters at her swearing in ceremony in June 2019. 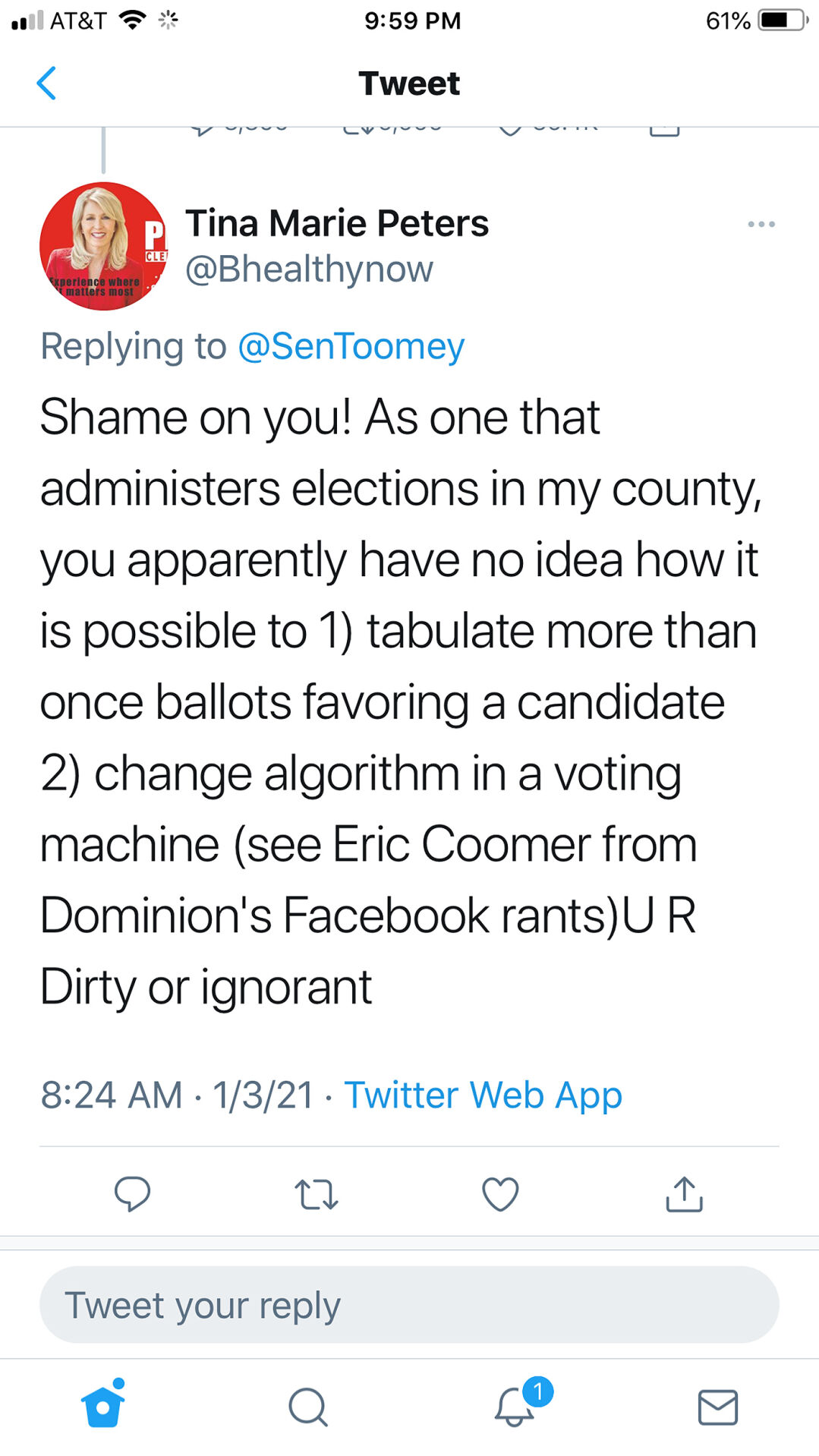 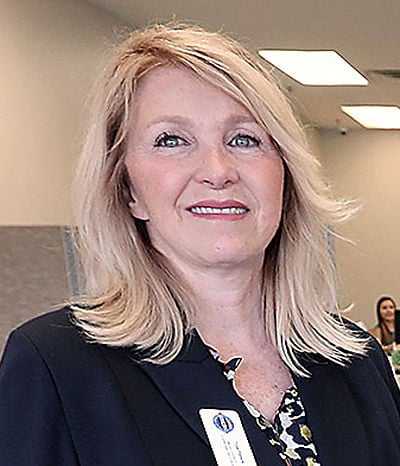 Mesa County Clerk Tina Peters at her swearing in ceremony in June 2019.

Despite public statements that Colorado’s election system is safe and secure, Mesa County Clerk and Recorder Tina Peters posted a tweet Sunday saying just the opposite.

In responding to a series of tweets from U.S. Sen. Pat Toomey, R-Pa., denouncing his Senate colleagues for their planned attempts to challenge the Electoral College certification on Wednesday during a joint session of Congress, Peters responded that ballots can be counted more than once and that software used in voting machines can be manipulated.

In doing so, Peters repeats, without evidence, unproven claims that a Colorado-based Dominion Voting Systems executive, Eric Coomer, admitted to doing just that.

“Shame on you! As one that administers elections in my county, you apparently have no idea how it is possible to 1) tabulate more than once ballots favoring a candidate 2) change algorithm in a voting machine (see Eric Coomer from Dominion’s Facebook ranks) UR Dirty or ignorant,” Peters tweeted from her private Twitter account, @Bhealthynow, on Sunday.

“You would be wise to learn the Constitution that you swore to uphold and to protect us from enemies ‘foreign and domestic,’ ” she added.

Coomer, the Colorado Secretary of State’s Office, numerous elections officials nationwide and Dominion company officials and even former U.S. Attorney General William Barr have repeatedly said there is no evidence of widespread election fraud anywhere in the nation.

“We are confident in Colorado’s electoral process, and proud that Colorado is considered one of the safest states in which to cast a ballot and the nation’s gold standard in elections,” said Betsy Hart, a spokeswoman for Colorado Secretary of State Jena Griswold, a Democrat. “It’s deeply concerning that a Colorado county clerk would spread unfounded conspiracy theories that undermine election integrity.”

Neither Peters nor any of her top deputies responded to a request for comment.

Because of false allegations directed at Coomer from the Trump campaign, the president’s family and personal attorneys and conservative media outlets, Coomer was forced into hiding because of death threats aimed directly at him and his family.

“I want to be very clear: I have no connection to the Antifa movement, I did not ‘rig,’ or influence the election, nor have I participated in any calls, demonstrations, or other demonstrable activity related to any political party or social/justice group,” Coomer wrote in a Dec. 8 guest commentary in The Denver Post. “All claims that someone recorded me on a call, or even overheard me saying, ‘Don’t worry about the election, Trump’s not gonna win. I made (expletive) sure of that!’ are wholly fabricated. Moreover, I do not have the capability to do such a thing. I have not written a single line of code in the Dominion Voting System product.”

Coomer has since filed a defamation lawsuit against the Trump campaign, two of its attorneys, Sidney Powell and Rudy Giuliani, conservative news outlets Newsmax and One American News Network, Michelle Malkin and Joe Oltmann, a Colorado blogger who made the initial false claims about Coomer and Dominion.

One day before that suit was filed in state court, Newsmax and Fox News aired statements or clarifications debunking voter fraud claims after Dominion threatened to sue. To date, OANN has not.

State elections officials, including Peters’ own elections managers, have repeatedly said that Colorado’s election system is the best in the nation, if not the world. Colorado has a mail-in voting system, and even those who cast ballots in person do so on paper or with machines that provide a printed receipt.

Days after the Nov. 3 election, Peters, a Republican, and several members of her election staff said the 2020 general election in the county went off without a hitch, and passed its risk-limiting audit with flying colors.

About a week after that election, former Secretary of State Wayne Williams, a Republican, posted a message on his Facebook page saying that federally approved Dominion voting equipment have been in use in Colorado since 2016, and they’ve had zero problems.

“Since its adoption, Dominion machines have been tested in 62 Colorado counties at least 807 times,” wrote Williams, who’s now on the Colorado Springs City Council. “They have passed every test.”

Attorney General Phil Weiser, who said people should listen to what Williams has to say on the subject, expressed dismay that an elected official, particularly one charged with operating a county’s election, would challenge the state’s election system without evidence that anything is wrong, adding that no such evidence exists.

“The efforts to raise questions without evidence is irresponsible, and it’s harmful to the integrity of our democratic republic,” he said. “What do we do when individuals act irresponsibly and in derogation of their duty to the rule of law? We have elections for a reason, and what we need is leaders to be held accountable when they act in ways that are unprincipled, that are irresponsible and dangerous.”

Peters’ Sunday tweet comes at a time when numerous members of Congress, including U.S. Rep. Lauren Boebert, R-Rifle, have repeatedly questioned the nation’s election system, saying they plan to challenge the Electoral College certification when it comes up for a vote on Wednesday.

“When it comes to precedents and norms, the most dangerous one that we could set is failing to defend the integrity of our elections,” Boebert tweeted on Monday, two hours before she urged Georgia voters to cast ballots for Republican Sens. David Perdue and Kelly Loeffler in today’s runoff elections.

In the tweets that Peters responded to, Toomey said his Republican colleagues, Sens. Josh Hawley of Missouri and Ted Cruz of Texas, would be wrong to challenge the official Electoral College results, which went 306-232 in favor of President-elect Joe Biden.

Toomey said he voted for Trump, but the evidence was “overwhelming” that Biden had won.

“The senators justify their intent by observing that there have been many allegations of fraud,” Toomey tweeted on Saturday. “But allegations of fraud by a losing campaign cannot justify overturning an election. They fail to acknowledge that these allegations have been adjudicated in courtrooms across America and were found to be unsupported by evidence.”

The senator said he planned to “vigorously” defend the nation’s election system and would oppose “this effort to disenfranchise millions of voters in my state and others.”