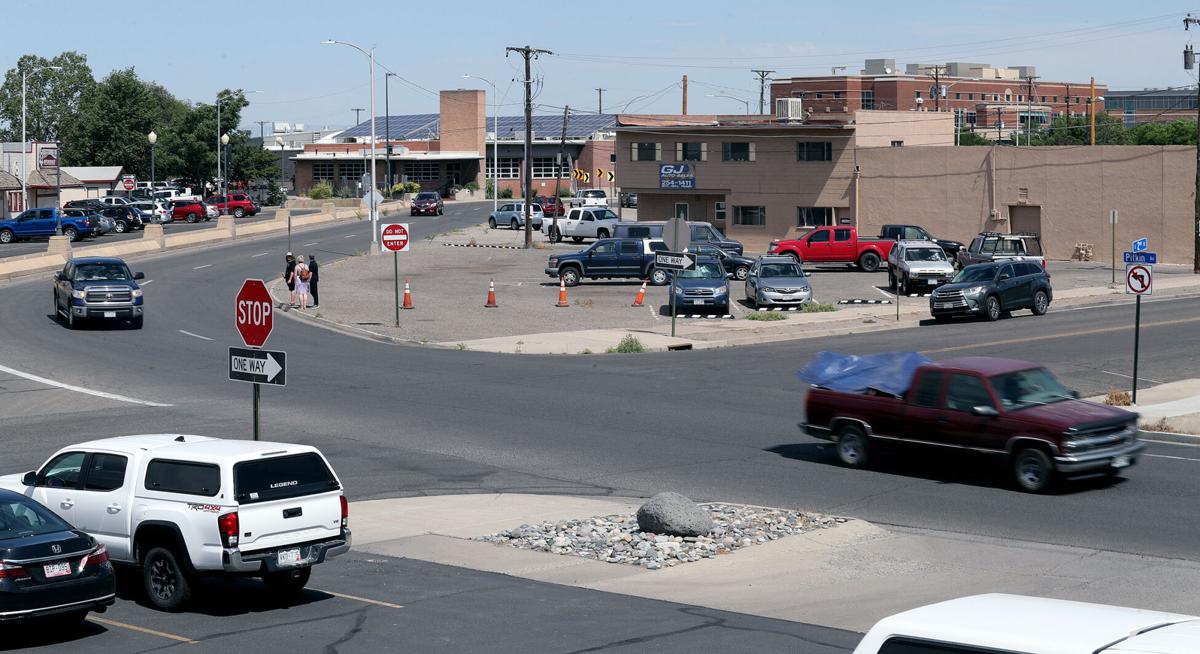 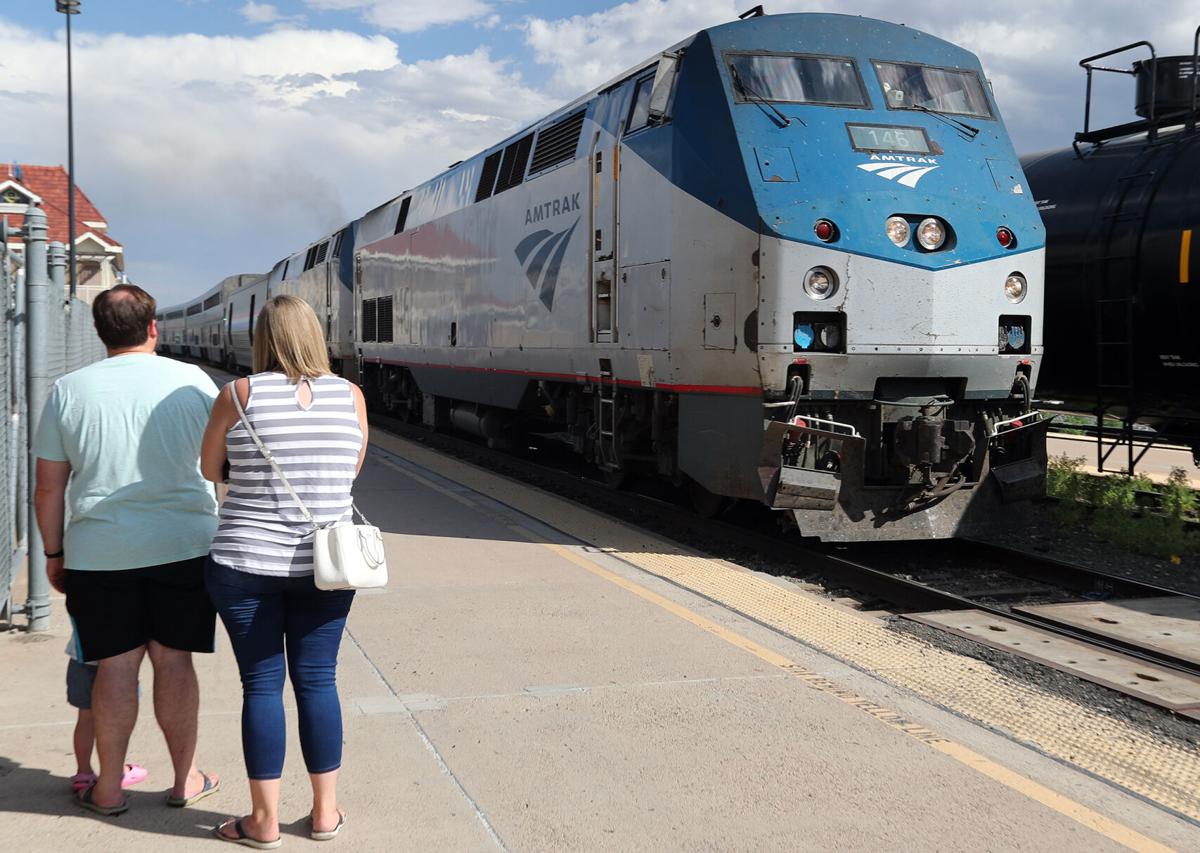 A westbound Amtrak train arrives at the Grand Junction station. 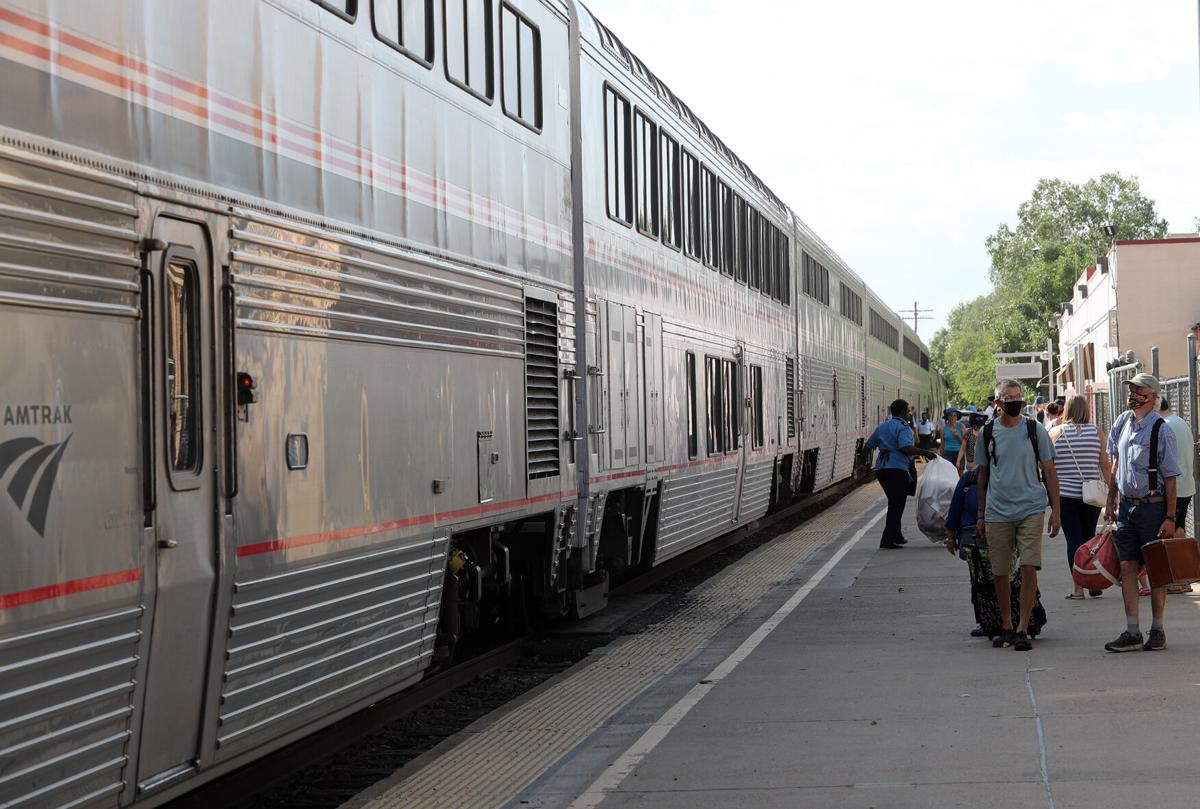 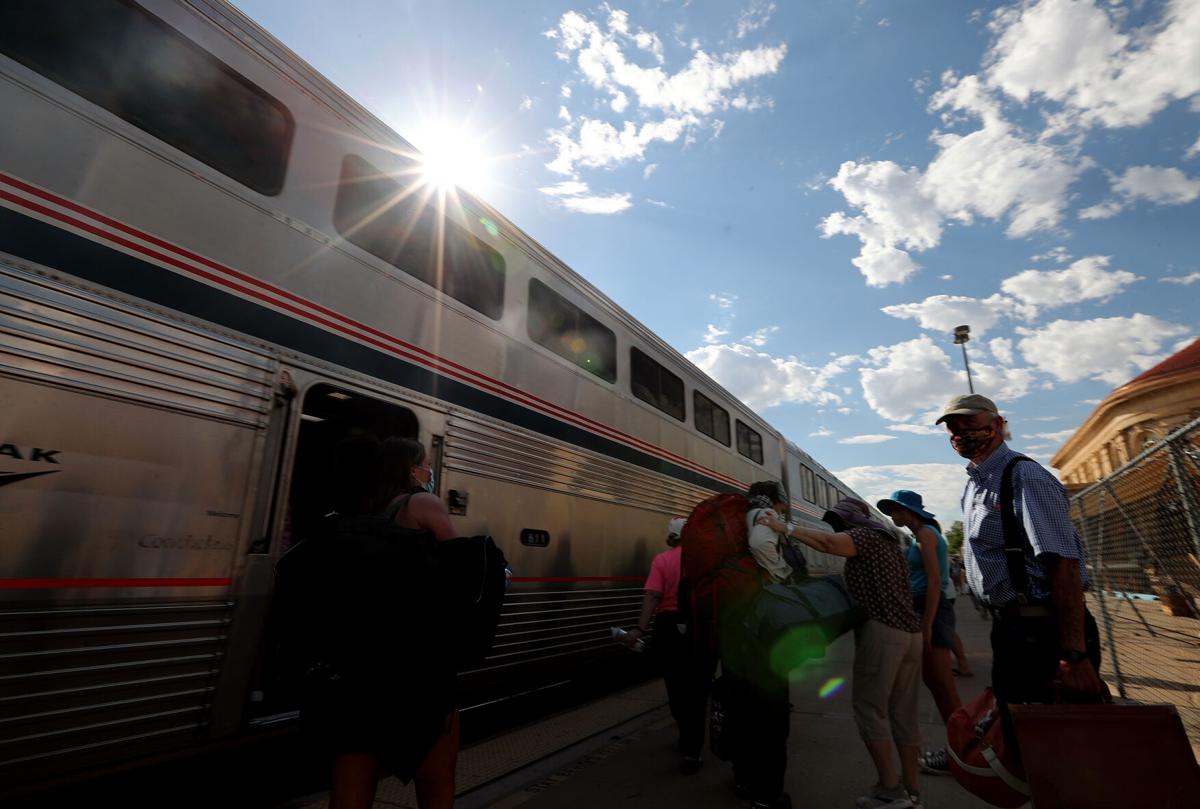 A westbound Amtrak train arrives at the Grand Junction station.

The sharp bend where Second Street crosses Ute and Pitkin avenues in Grand Junction has been a tangle of competing interest amid planned upgrades to the Interstate 70 Business Loop, but a proposed transit hub could cut this Gordian knot.

For years, Grand Junction has been interested in turning Second Street into a promenade that would incorporate wider sidewalks and landscaping for a space more friendly to pedestrians and bicycles. One concern has always been finding a solution to get those people across Ute and Pitkin.

Meanwhile, the Colorado Department of Transportation has been working through upgrades to I70-B starting near Mesa Mall leading to its most recent work on the fifth phase of that project at the First Street and Grand Avenue intersection.

The next phase will take it around the First Street curve where the road splits into Ute and Pitkin. CDOT has proposed smoothing out that curve and potentially widening the road to three lanes. But, so far CDOT has been reluctant to build more pedestrian friendly elements at Second Street, like a cross walk with a signal, into their plans — something the city of Grand Junction has been advocating for.

If the area was friendlier to bicycles and pedestrians, it could lead to more usage of that area and more need for a crossing. The city has also proposed a pedestrian bridge that would cross from Second Street to the new Dos Rios development, driving more people between those areas, City Manager Greg Caton said.

“We see this, really the promenade and the bridge, as kind of the western loop — the riverfront, Dos Rios, Las Colonias, Seventh or Ninth and then back up to Main and to Second,” Caton said.

Until now, the city’s vision for a pedestrian friendly thoroughfare and the state’s plans for a widened traffic artery have been at odds, but a new opportunity may allow the two to keep traffic moving while also allowing people to move safely from downtown to Dos Rios via that tangle of visions at Second Street.

In February, CDOT moved its Bustang bus stop from the northwest corner of Ute Avenue and Fifth Street to the Grand Valley Transit Downtown Transfer Facility on South Avenue.

“There’s not really any facilities at the downtown transfer facility because it wasn’t really designed to include these other regional transit services,” Mesa County Regional Transportation Planning Office Director Dana Brosig said. “So we don’t have a large waiting area. We don’t really have designated drop-off areas, and it has created some problems at our facility.”

This search led to the idea for a transit hub that could have Greyhound, Bustang and Grand Valley Transit stops at one place that would connect the downtown to Amtrak and to bike and pedestrian paths. The area around Second Street looked ideal.

“The idea is, a tourist could come here by train (or bus) and not have to get a car or take taxis,” Brosig said. “They’d be able to walk to their hotels or walk downtown or jump on Grand Valley Transit and go to CMU if it’s a student or people visiting the college.”

The hub itself is proposed as a 5,000-square- foot building on the triangular piece of land west of Second Street between Ute and First. It would have around 2,000 square feet for waiting areas, bathrooms and ticketing. The rest would be a flexible space that could be used as a kind of covered plaza near downtown. It would also utilize a city-owned parking lot across Second Street for things like electric vehicle charging.

“We want to activate the mobility hub,” Brosig said. “We don’t want it to just be a place where bus people are getting the bus and then they leave. We’d like it to be a destination also and really bring people to the area around the train station and have much stronger pedestrian crossings across I-70B.”

This was a breakthrough solution for the problem of getting people across I-70B, City Council member Anna Stout said. With CDOT on board to bring pedestrians to Second Street, they have more of an interest in getting pedestrians across Ute and Pitkin.

“Since the mobility hub is CDOT’s project, CDOT now has a personal interest in seeing that curve be pedestrian friendly,” Stout said. “So the conversation before was how will people get across? This is going to split the north and south side of that curve. This won’t allow that because you can’t have a bunch of pedestrians coming and not be able to get across it.”

CDOT hasn’t yet committed to having a signal and crosswalk at Second Street, but the addition of the hub does increase the need for a crossing to get people across safely, CDOT Professional Engineer Kaity Clark said. CDOT’s existing plans for I-70B in that area will also enhance pedestrian access.

“It would connect and establish a lot more pedestrian paths that don’t currently exist from say the Catholic Outreach building to Second Street,” Clark said. “There’s not really an established path along I-70B at that location. So we would be able to make those connections.”

Having these connections would make a huge impact on the community, helping with traffic congestion and leading to economic development, Caton said.

“These types of facilities are really game changers for communities... It’s so important to not just be focused on one mode (of transportation), but clearly have a broad approach because most communities cannot build their way out of traffic congestion,” Caton said. “It’s really important to take the broader view.”

With the idea for a transit hub comes the obvious question of how to pay for it. Enter the U.S. Department of Transportation.

This presented the opportunity to tie the entire project together under one grant that included the transit hub, the I-70B upgrades, Second Street promenade and the pedestrian bridge, as well as transit projects in Rifle and Glenwood Springs called the CDOT Multimodal Options for a Vibrant, Equitable (MOVE) Western Slope Project.

The city estimated the Grand Junction project — mobility hub, Second Street, I-70B and pedestrian bridge — would cost around $37 million. The city is planning to donate or lease land it owns in the area for the transit hub, as well as $3 million to go toward the Second Street promenade and the pedestrian and bike bridge. CDOT is proposing to provide money it has allocated for the next phase of I-70B construction as a match as well.

“I think the multimodal hub is a great project, particularly if we can do it with outside funds — grant money in other words,” Grand Junction Mayor Chuck McDaniel said. “It will certainly extend the use of the area down there and allow some redevelopment toward that corner.”

If the grant is successful, the project would almost certainly lead to redevelopment along Second Street.

Having a direct connection between Dos Rios to Main Street would be a positive for businesses, Downtown Development Authority Executive Director Brandon Stam said. Investment in key parcels like the depot on East South Street would also become more likely.

“There’s a lot of studies that show that transit- oriented corridors do lead to increased investment from the private sector,” Stam said. “So I think that’s what you would likely see there. Buildings like the depot and some of those other buildings in there I think could be redeveloped. There are certainly some blighted buildings in that area.”

One building that isn’t blighted, but would be directly impacted by this plan is GJ Auto Sales, a car dealership that occupies most of the triangle proposed for the transit hub building.

Owner Mike Martinez said he’s not dead-set against the idea, but he’s happy with where he’s at.

“We’re still waiting to hear what they’re going to do with these roads out here to be honest with you,” Martinez said. “It’s hard to say anything right now. We’ve got a successful business here. So, we’re not planning on going anywhere.”

Other major implications exist. Grand Junction Convention Center General Manager Maria Rainsdon said giving people more access to hotels in the area and directly to the convention center would certainly be a positive. She said for convention hosts they could use the corridor to do walking tours to the riverfront.

“Certainly the safety of our attendees is also paramount for them to feel like they can walk around downtown or potentially come in from Denver on rail instead of driving in,” Rainsdon said. “As we’ve seen in the last week, sometimes I-70 shuts down even in the summer.”

Safety of everyone in that area is the most important improvement Council Member Rick Taggart said he was interested in seeing. He noted final plans are not in place, but the proposal gives him hope that that will be addressed.

“To me, safety is the most important issue there because it is not a safe corner today,” Taggart said. “There’s no question about that.”

The plan is still fluid. It hasn’t been designed. The funding depends on the federal grant. However, the potential and the solutions this project delivers are tantalizing, Stout said.

“The bottom line here is that CDOT is working extremely closely with the city on this and they’ve been sympathetic to the concerns of our residents, of our Council and of our staff,” Stout said. “This is just kind of the perfect resolution because it achieves CDOT’s needs while really creating something very modern and very value-adding for our downtown area specifically and for our community as a whole.”

The city of Grand Junction and Colorado Department of Transportation are planning major upgrades to road and transit infrastructure around the city. From resurfacing North Avenue to expansion of 24 Road and a proposed multimillion dollar, federally funded transit hub near downtown, these projects, if seen to fruition, would transform the city’s transportation systems for years to come.

The Daily Sentinel is looking at each of these projects in a three part series that will discuss the plans and potential impacts to businesses and the public.

Online: North Avenue to get ‘facelift’ next summer. https://tinyurl.com/35rt9hc7