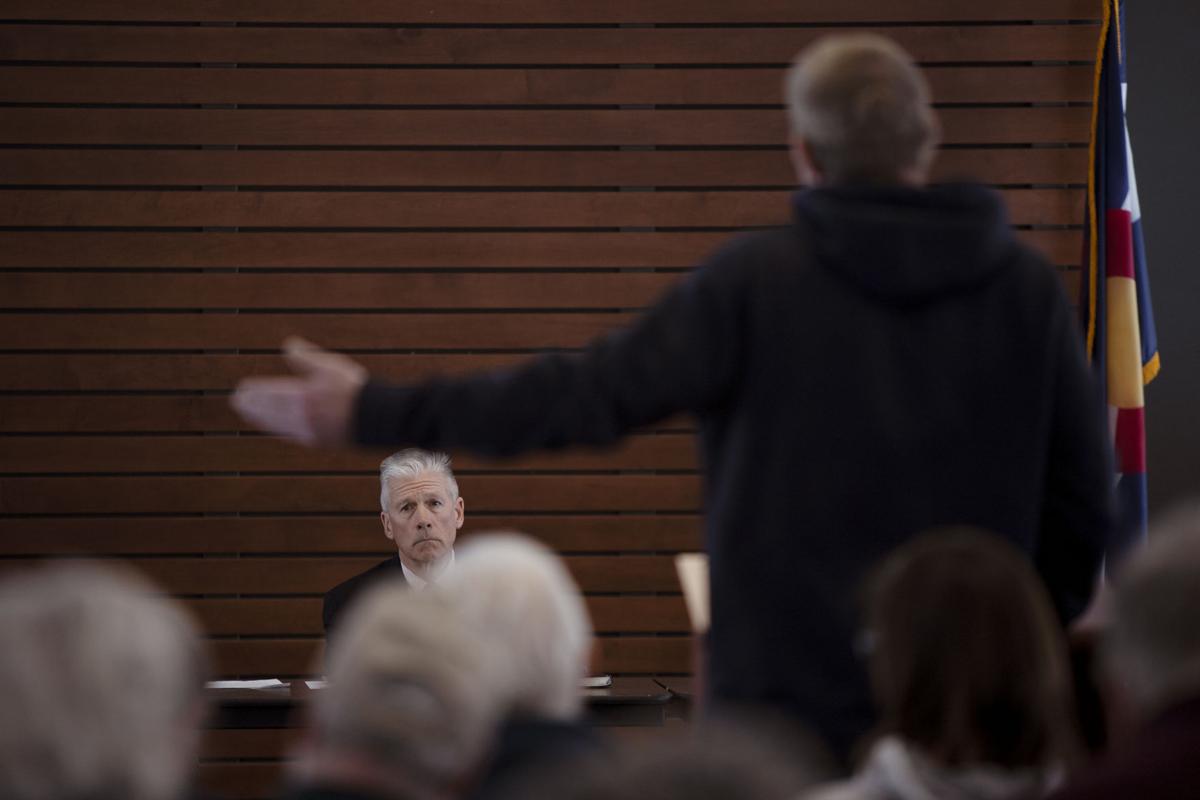 Mayor Rick Taggart listens as community member Josh Thompson speaks his mind on the Orchard Mesa Pool issue on Tuesday at Stocker Stadium. Thompson, who attended the meeting on behalf of his daughter, brings to light the lack of recreational opportunities for children and senior citizens in Grand Junction. 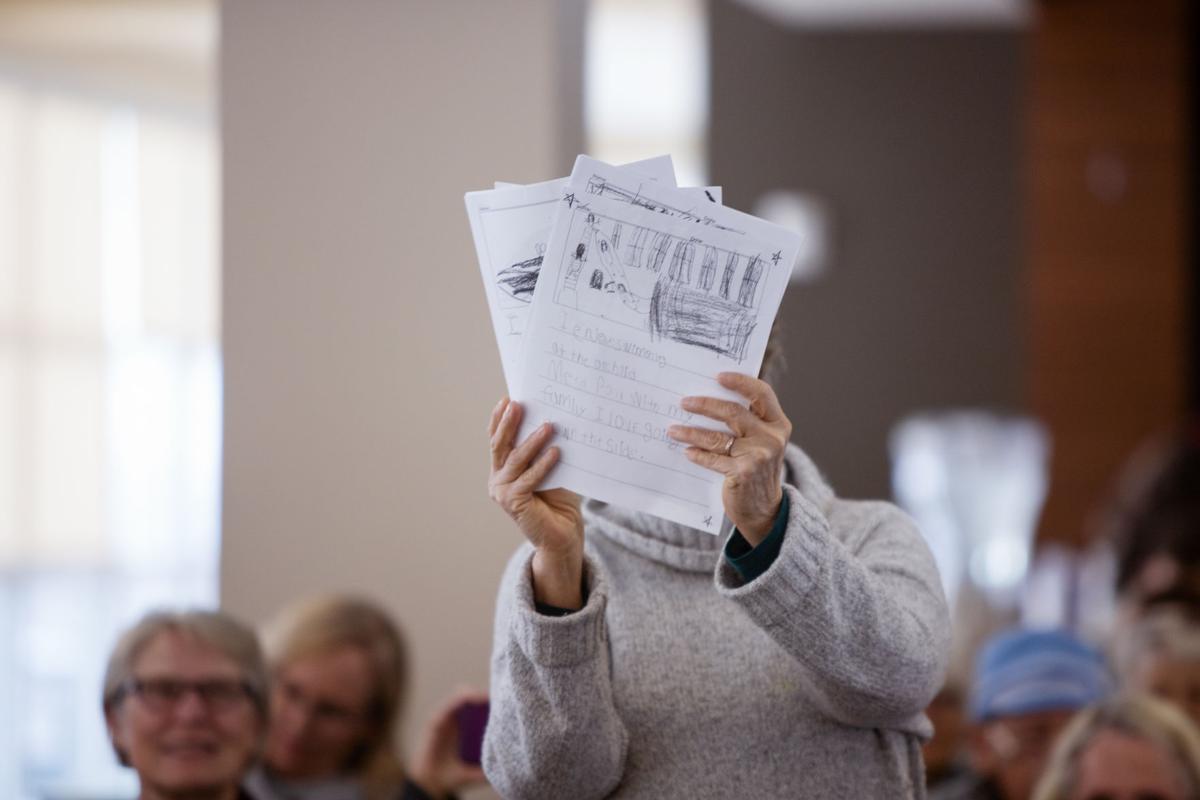 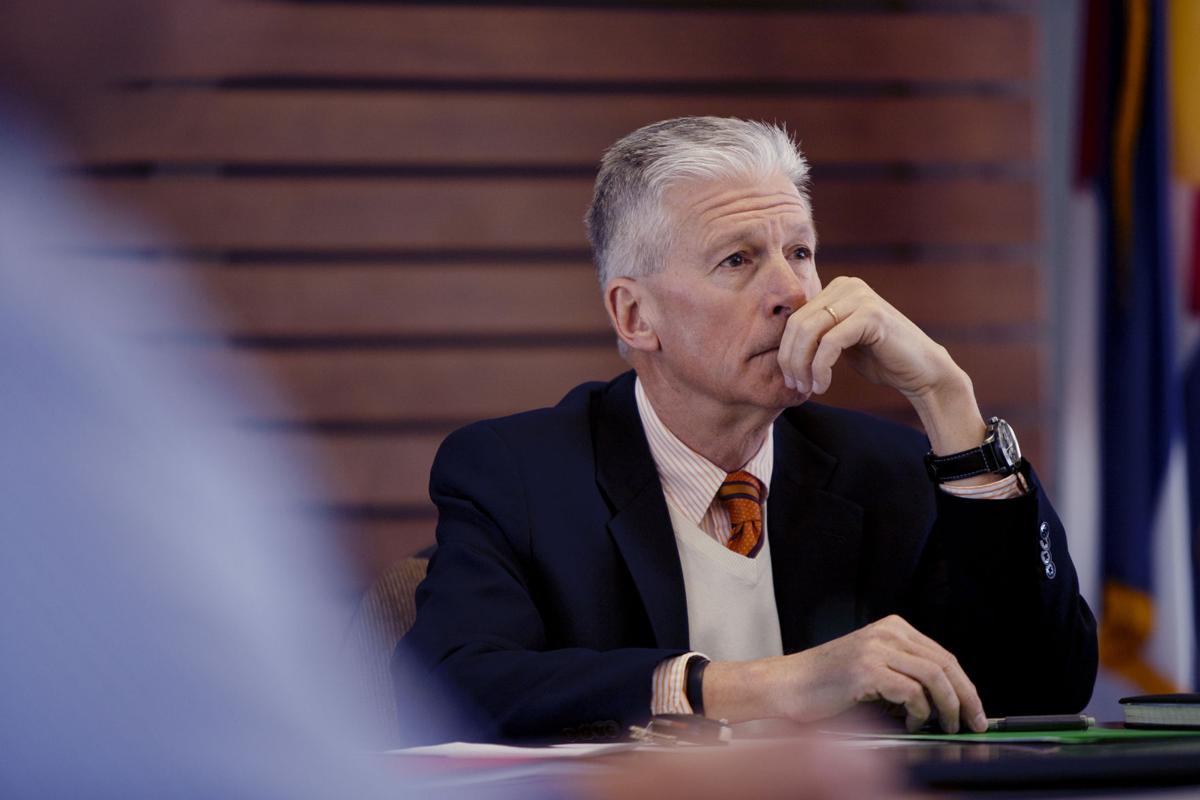 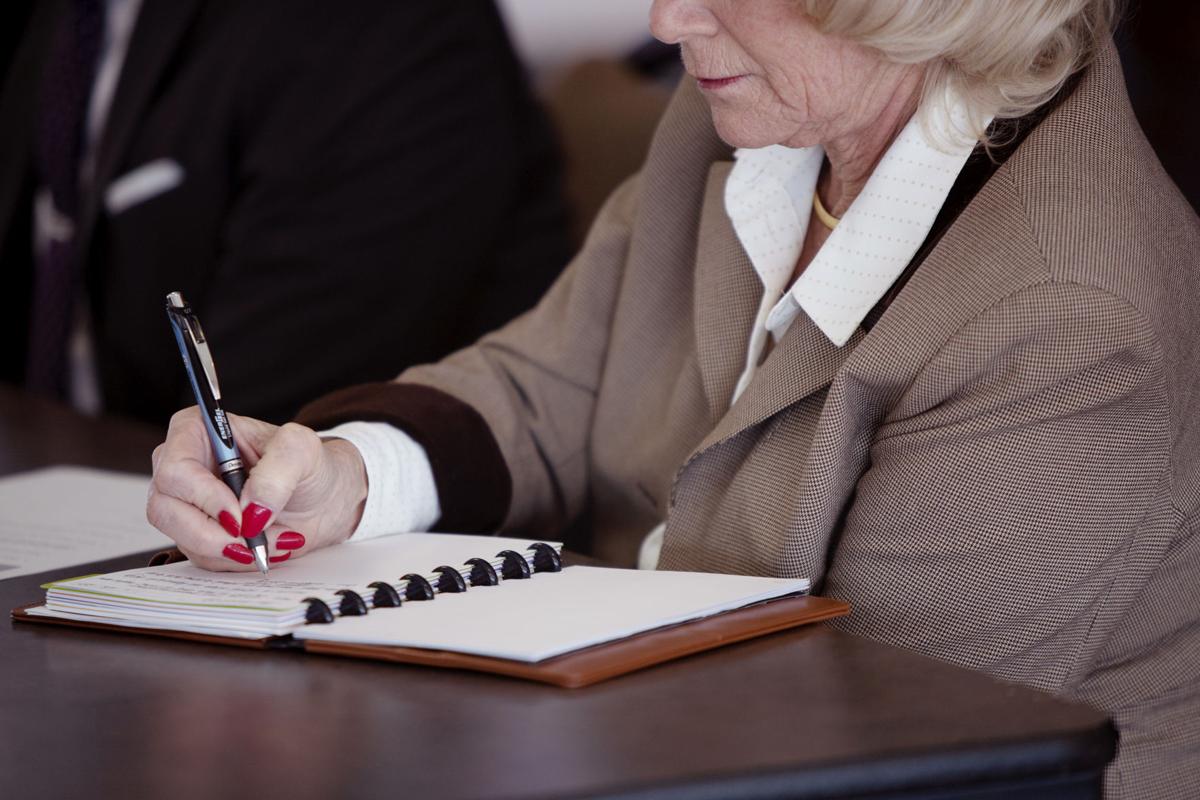 District 51 Superintendent Diana Sirko takes notes during the community meeting about the future of Orchard Mesa Pool on Jan. 28 at Stocker Stadium. 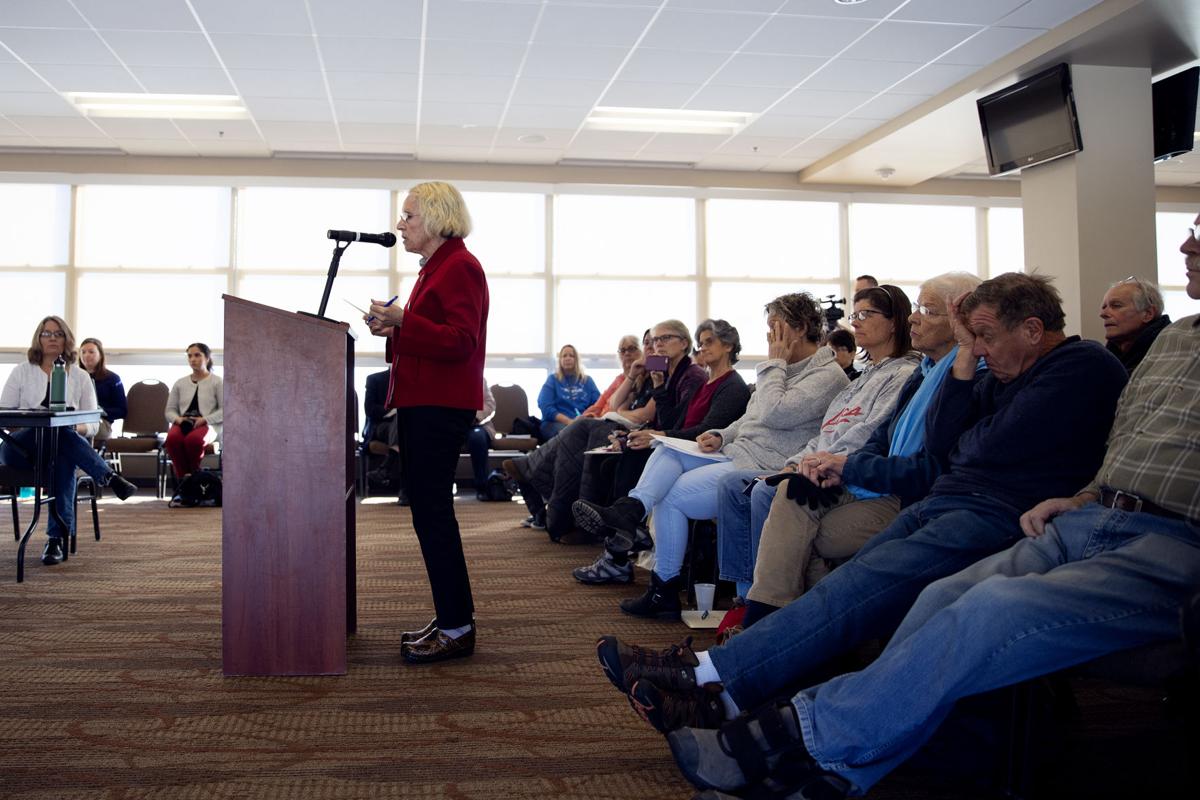 Mary Mastin addresses District 51, Mesa County and Grand Junction city officials about why Orchard Mesa Pool should not be demolished during a community meeting on Jan. 28 at Stocker Stadium.

Mayor Rick Taggart listens as community member Josh Thompson speaks his mind on the Orchard Mesa Pool issue on Tuesday at Stocker Stadium. Thompson, who attended the meeting on behalf of his daughter, brings to light the lack of recreational opportunities for children and senior citizens in Grand Junction.

District 51 Superintendent Diana Sirko takes notes during the community meeting about the future of Orchard Mesa Pool on Jan. 28 at Stocker Stadium.

Mary Mastin addresses District 51, Mesa County and Grand Junction city officials about why Orchard Mesa Pool should not be demolished during a community meeting on Jan. 28 at Stocker Stadium.

Local officials put off any decision regarding the Orchard Mesa pool following a tense Pool Board meeting packed with residents pleading to keep the facility open.

The Pool Board, comprising representatives of the District 51 Board of Education, the Grand Junction City Council and the Mesa County Commission, discussed how to fund around $2.5 million in repairs to the pool or whether to tear it down.

The prospect of losing their community pool brought many residents, especially from Orchard Mesa, to the meeting. The Pool Board heard comments from seniors who use it for exercise, from parents and grandparents who wanted their children to learn to swim and were also given more than 80 letters from children who wanted to save the pool.

Alma Kenney stressed the pool’s importance to veterans who use it for classes and therapy. Kenney teared up when speaking about her own experience at the pool.

“I am a Navy veteran who suffers extremely from PTSD,” Kenney said. “I’ve had two complete knee surgeries in the last two years. This pool has saved my life. I work with disabled veterans. I work with sick veterans and the water saves their lives.”

Josh Thompson said he came out for his daughter who is in first grade. He spoke about the importance of giving children places to recreate.

“I’m not trying to be rude, but I also didn’t come here to be nice,” Thompson said. “It seems like nobody cares about senior citizens or children in this community. They’re just left high and dry. You shut stuff down.”

Other speakers touched on the staff at the pool, complimenting their work. Many sought answers on what has been done to keep the pool from closing and what needs to happen in the future.

The school district owns the pool and pays for utilities, the city manages it and the county and city each contribute half the operating costs. The district can no longer own the facility due to an arrangement relating to its $13.9 million Building Excellent Schools Today (BEST) grant that helped fund the construction of the new Orchard Mesa Middle School.

The city proposed the three entities evenly split the cost to repair the pool with each contributing around $850,000 and the city taking over ownership. The county and school district balked.

“I know our City Council is ready to step up on the proposal we put in front of you and all I’m hearing right now is how our other two partners in this, and excuse me, I’m usually a gentleman, are trying to skate out of it by saying you’re going to gift it to us,” Taggart said. “When is the last time you gifted something to somebody with a $2.5 million liability? I would never accept if someone gave me something with a $2.5 million liability.”

Pugliese and the members of the district responded by saying they have been good partners with the city in the past, but both entities are limited by their budgets. Pugliese took umbrage with Taggart, noting she helped restore county funding for the pool after it had pulled out of its agreement with the city and school in 2010.

“I’ve got lots of stuff in my head I’d like to say, but I’m not going to say it out loud,” Pugliese said following Taggart’s remarks. “You know Mayor Taggart, I appreciate that. I brought this county back to the table on the Orchard Mesa Pool Board. We wouldn’t even be here from 2010 if it wasn’t for me. So a little bit of appreciation that we’re even at the table would be nice.”

Board of Education member Doug Levinson said the school was willing to contribute $550,000 toward the pool repairs, which is the amount it would otherwise need to spend to demolish the building. However, he said the district did not believe continuing its partnership on the pool fit its mission.

The district also offered to continue to pay for the pool’s utilities for a year to allow the city to go back to the voters requesting tax funds to construct a community center.

In 2019 voters rejected a proposed $79 million for construction costs that would have covered three projects: a 98,000-square-foot community center at Matchett Park, the development of playing fields and other infrastructure on 75 acres at the park and renovations to the Orchard Mesa pool and its surrounding facility.

“We as citizens vote the funding for all these governments and we all have our favorite things that we want to fund,” District 51 Chief Financial Officer Phil Onofrio said. “In this case, it’s the pool, but overall our infrastructure is collapsing a little at a time. Until the public decides that they want to pay for all these infrastructure things, parts of it are going to continue to fail and we will be forced to make these bad decisions.”

Onofrio said the district had engineers look at 11 of its schools and they determined they needed $135 million in deferred maintenance. Some of those schools needed fire sprinklers and had fire alarms that were so old they could no longer find replacement parts. Levinson said he’d be in favor of providing the full $850,000 if the district didn’t have other needs.

“If we had $850,000 laying around we’d love to give it to the pool, but there’s a lot of other things we have needs for in our district,” Levinson said. “We have teacher salaries, we have safety issues in our district, we have aging buildings that are 45 years old on average, we have Grand Junction High School. So we have no shortage of needs.”

At the close of the meeting, Pool Board members agreed to go back to their respective entities to get more guidance and see if there are other sources for funds to help save the pool before meeting again in February.

Board of Education President Tom Parrish said the Pool Board would need to come together rather than arguing to resolve the issues with the pool.

“What we better do is find a solution here because I agree with everyone who sat here (in the audience). It’s a wonderful opportunity, now what can we do to save it?” Parrish said. “We can spend the rest of our time pointing fingers at each other and saying we’re all terrible people and we’re not interested in a solution or we can put our heads together and come up with a solution.”

Orchard Mesa Pool by the numbers

Even before the Orchard Mesa Pool Board meets this morning, it is already clear the proposal from the city of Grand Junction for the three ent…