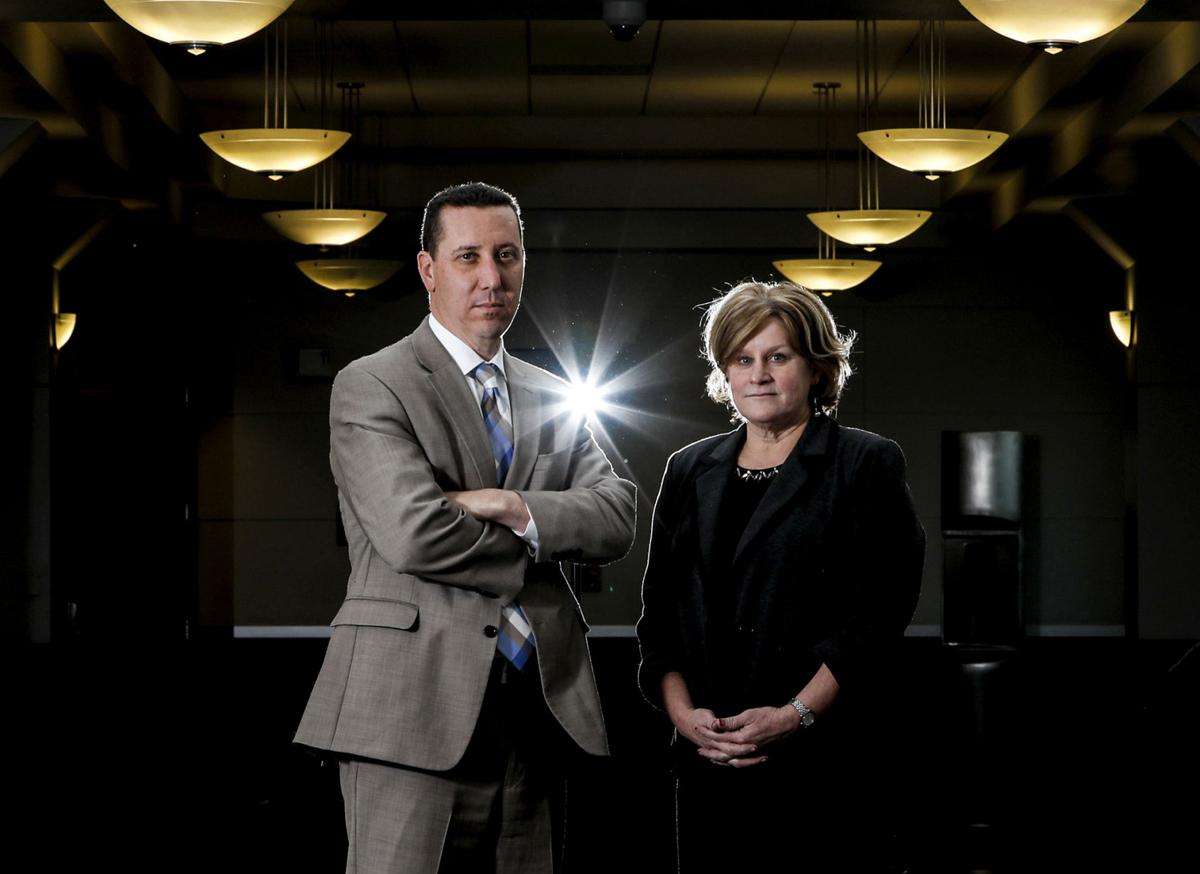 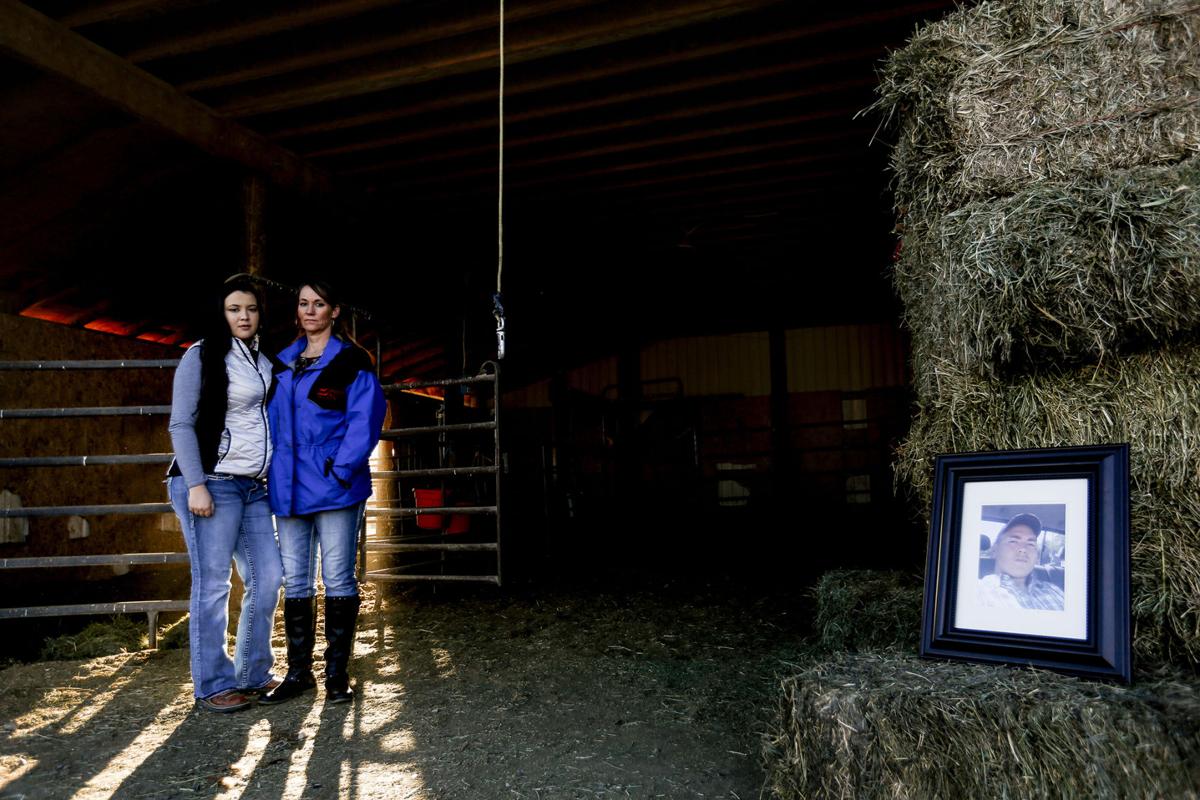 Monica Sanchez, left, and her mother Donna Sanchez stand near a picture of brother and son Brandon Sanchez at their extended family's Whitewater ranch. Brandon Sanchez was shot to death Sept. 16 in Pear Park. 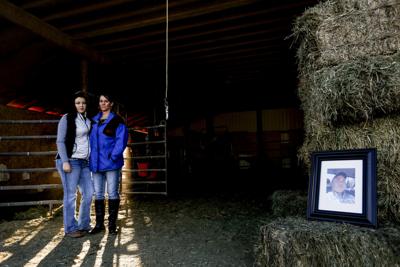 Monica Sanchez, left, and her mother Donna Sanchez stand near a picture of brother and son Brandon Sanchez at their extended family's Whitewater ranch. Brandon Sanchez was shot to death Sept. 16 in Pear Park.

Nobody expected it to be an easy conversation.

Brandon Sanchez was just 26 when he was shot to death at a Pear Park home Sept. 16.

His family loved him.

They wanted justice, which to them meant the shooter behind bars, charged with murder.

Trish Mahre and Danny Norris were the ones who had to sit down and tell Sanchez's family that they believed Melissa Pruitt, a 34-year-old felon, was legally justified when she pulled the trigger and killed their loved one.

After a lengthy review of the case, Mahre, a high-ranking prosecutor who handled the case for the district attorney's office, and Norris, the Mesa County Sheriff's Office's lead investigator, planned to meet with the Sanchez family Dec. 5 to break the news to them.

It was a bad day in the middle of a chaotic week for law enforcement.

The same day, police arrested a convicted sex offender after a child who had allegedly been lured into a sex offender's car hit a panic alert on his phone. The same week, investigators recovered the body of a Clifton man from a remote area on Grand Mesa, eight months after he was murdered and his body was stashed there.

During the meeting itself, Mahre said Norris was called away to a fatal shooting in the Redlands, leaving her and a victim services specialist to finish the conversation.

"We always have to be mindful that while we might have a lot of things going on, for the victim's family, this is the only thing," he said.

In a memo written the day before the meeting, Rubinstein summarized the situation.

Sanchez was shot mid-morning on Sept. 16 at 3116 Chipeta Ave. He was dead by the time deputies and paramedics arrived on the scene. He had drugs in his system at the time of his death, and a number of scrapes and bruises on his body.

It appeared that he and a relative, who had previously lived at the home, had arrived unannounced at the home and gone directly to the garage where four people were sleeping: Pruitt, her boyfriend Andrew Finley, another man named Adam Rodriguez, and his girlfriend, Anna Sanchez.

Anna Sanchez, who is not related to Brandon Sanchez, appeared to have had some rental agreement with the house's main tenant, a woman named Bonnie Lopez.

Brandon Sanchez's relative — who is facing assault and other charges in connection with the case and whom The Daily Sentinel agreed not to name in this set of stories — told investigators he was upset that Lopez had been renting out the garage to "no good" people while living in the main home with her children.

He said he drove to the home that morning with Sanchez to kick the renters out. When the pair burst in, witnesses said they began attacking people, Sanchez apparently with a broom and his relative at one point with a piece of rebar. Several of Rodriguez's teeth were knocked out, and Finley was bruised and battered as well.

It was apparently during the attack that Pruitt went for a gun.

Pruitt, who did not respond to requests for an interview for this series, claimed she found the weapon in a soft case on the property. But Lopez denied owning it, the memo said, and Norris said he doesn't think Lopez — one of the few adults on the property without a felony record — had a reason to lie about whose gun it was.

"My wild theory is (Pruitt) ran to the car to get the gun," Norris said.

Pruitt shot Sanchez dead just outside an exterior door to the garage. Then she and the other three people who had been sleeping in the garage fled in an SUV, only to be stopped a few blocks away by an alert deputy.

Deputies found guns and drugs in the vehicle.

Rubinstein wrote in the memo that under Colorado's "make my day" law, Pruitt was justified in shooting Sanchez. Rubinstein wrote that it appears Sanchez had been making an unlawful entry into the garage, where he didn't live and which Rodriguez and Anna Sanchez were renting. Sanchez's relative didn't have authority to enter the garage as well, because he hadn't been living there for months and the most recent time he visited, he rang the doorbell.

Rubinstein also wrote that Sanchez and his relative also appeared to have entered the garage in order to illegally evict people through use of force.

"It is clear that Ms. Pruitt had a reasonable belief that Mr. Sanchez might use physical force, as she observed it occurring when she was awakened to the assault in progress," he wrote.

While Rubinstein noted that his office would prosecute Pruitt for drugs and weapons charges, he concluded that she had "absolute immunity from prosecution for the shooting of Brandon Sanchez."

Brandon Sanchez's family has not taken the news well.

They disagreed with Rubinstein's ruling, and felt that pertinent information — like the fact that Sanchez was in a relationship with Bonnie Lopez and had been staying at her house regularly — wasn't given enough weight.

Sister Monica Sanchez said it stung that Pruitt was arrested on a drug possession charge Dec. 6, but then was able to quickly bond out of jail.

"She had that gun, two other guns, meth and heroin in that car, and she was in jail for like a week and she got out," Monica Sanchez said. "Nobody understands. Nobody gets it. It's not just me, being his sister. … Everybody is wondering, like, why is she not getting charged?"

Monica Sanchez said she has heard from people who knew her that Pruitt "used to be a wonderful person … and that drugs and the people she was hanging around with got the best of her." She said if she could tell Pruitt anything it would be about her brother.

"I want her to know that my brother was our everything," Monica Sanchez said. "She took somebody that we loved and that's not fair."

While the Sanchez family hopes to hire a lawyer to pursue some sort of civil case, Monica Sanchez said not seeing her brother's killer prosecuted criminally has denied them closure.

"The grieving process is … It's just really stretched out," she said. "We had his funeral and we laid him to rest and all of this is still going on."

She paused for a moment.

"We're never going to be over it," she said.

A multiday series examining the people, places and decisions involved in the Sept. 16 shooting death of 26-year-old Brandon Sanchez of Grand Junction.

TODAY: THE DECISION — Prosecutors chose not to file murder charges against the woman who retrieved a gun from her car and fatally shot Brandon Sanchez, believing Melissa Pruitt acted within Colorado's "Make My Day" law. It means Sanchez's family won't get to see his killer held legally responsible.

HOW WE REPORTED THIS SERIES

Daily Sentinel staff embedded with Mesa County Sheriff's Office investigators from the early hours of the investigation into the Sept. 16 shooting death of 26-year-old Brandon Sanchez of Grand Junction in order to observe and provide readers with a behind-the-scenes look at the way a homicide investigation works.

The Sheriff's Office agreed to the higher-than-usual level of access to its investigation on the following conditions:

■ The Sentinel agreed not to publish stories based on the special access reporting until the Mesa County District Attorney's Office had ruled on how to charge Sanchez's shooter.

■ The Sentinel agreed not to identify the man who is currently facing burglary- and assault-related charges in connection with the incident because his case is ongoing and prosecutors don't want to hinder his right to a fair trial.

■ Sentinel staff did not enter the property where Sanchez was killed at any point while reporting this story.

No other conditions were placed upon the Sentinel in this case.

As in all cases, the newspaper did not allow any source to review this story before publication, including any employees of the Sheriff's Office or the District Attorney's Office, or family members of the victim.