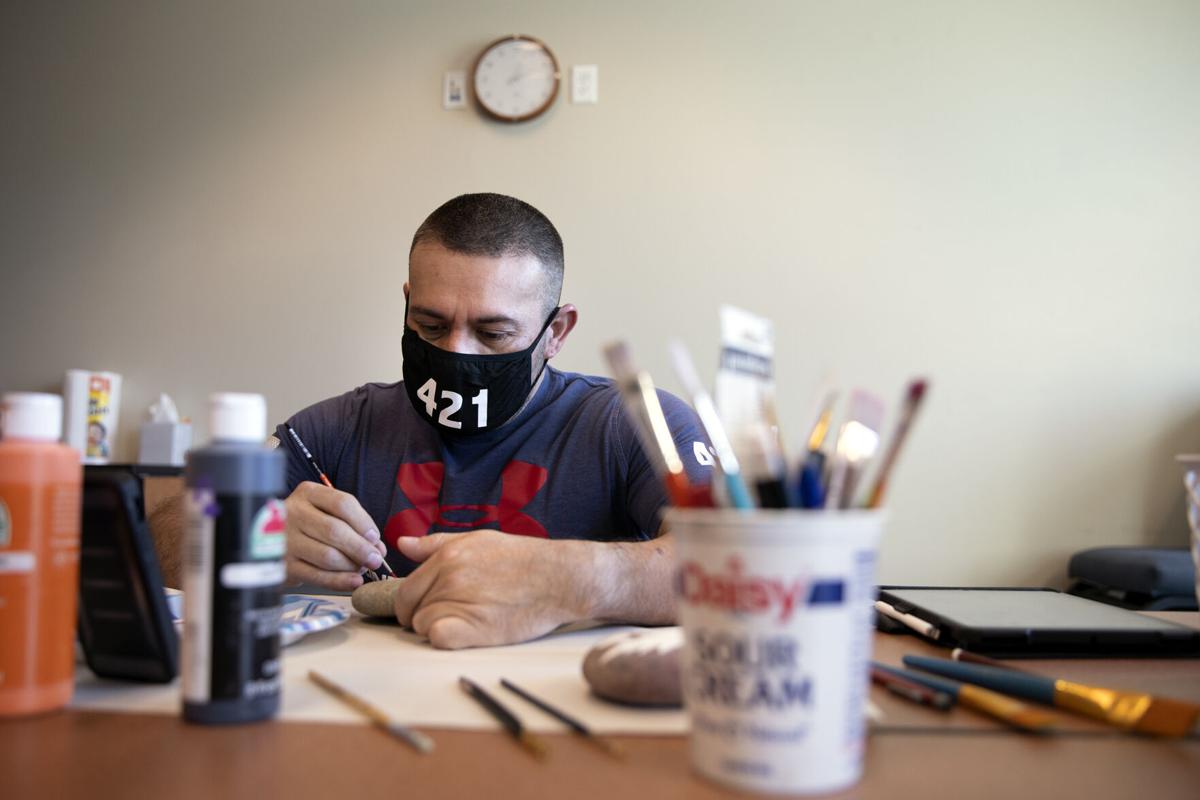 Jose Valadez, Rifle police officer and artist, paints a rock at the Rifle Police Station. The “421” on his mask signifies his dispatch officer number. 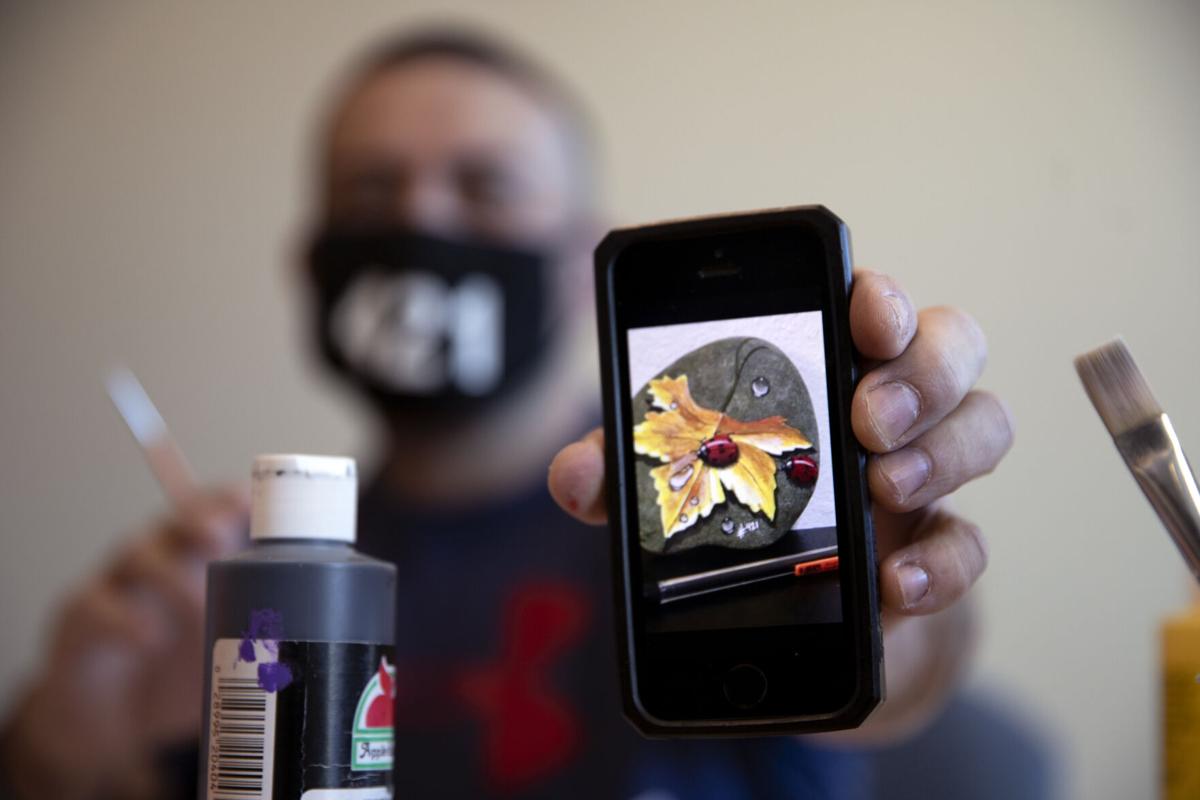 Jose Valadez, Rifle police officer and artist, shows the finished design for his rock painting at the Rifle Police Station on Tuesday. 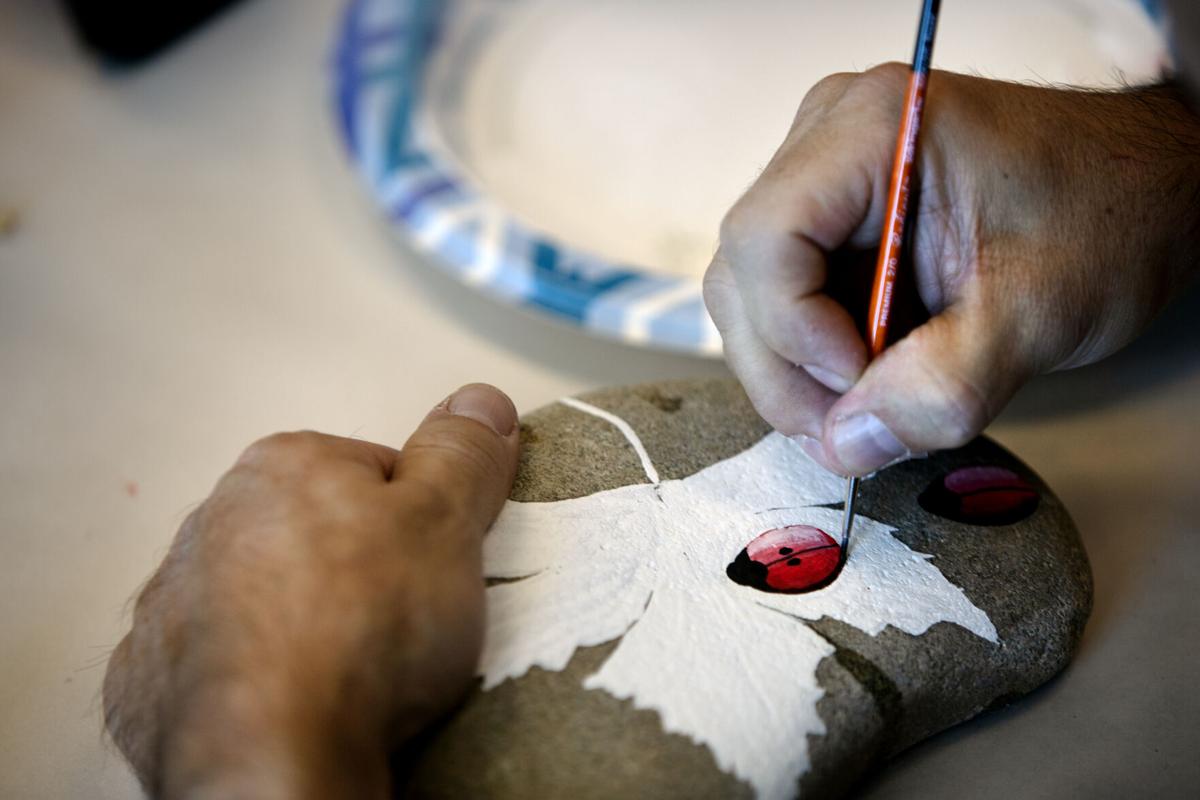 Jose Valadez, Rifle police officer and artist, paints a rock at the Rifle Police Station Valadez paints rocks and leaves them around town for the community to enjoy. 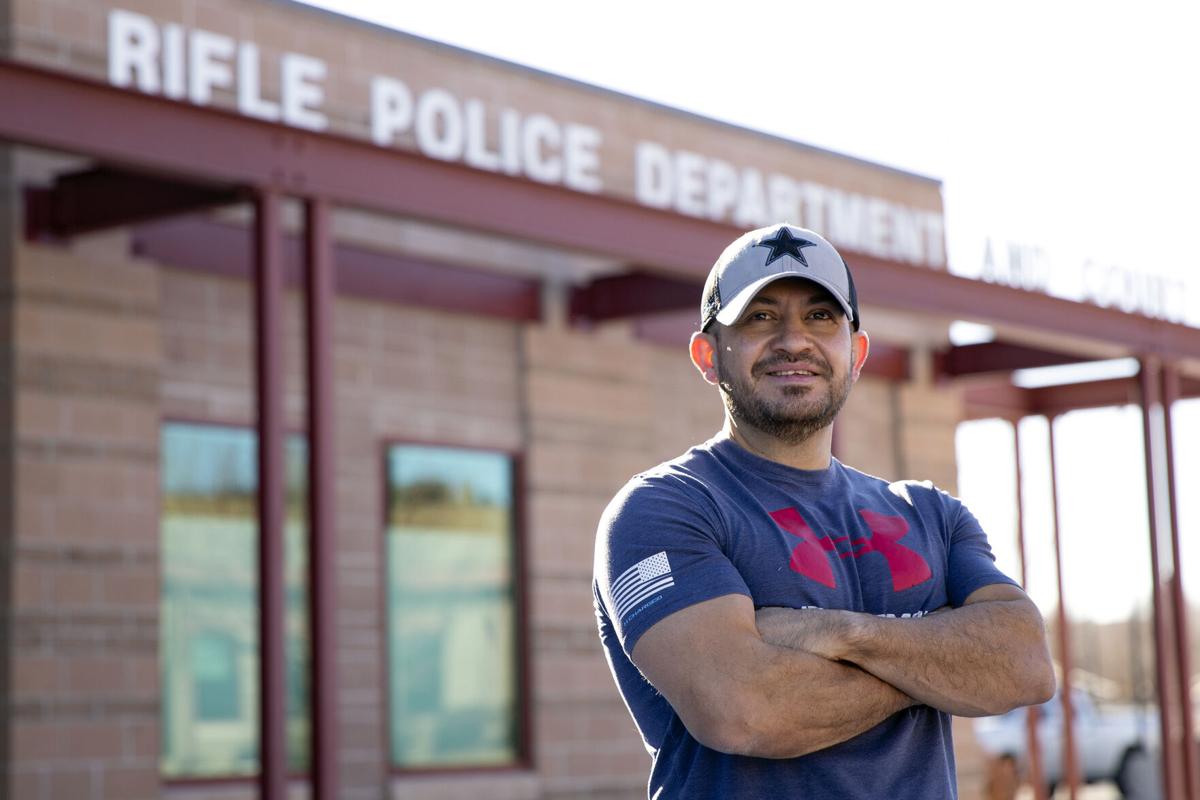 Jose Valadez, Rifle police officer and artist, poses for a portrait last week in front of the Rifle Police Department.

Jose Valadez, Rifle police officer and artist, paints a rock at the Rifle Police Station. The “421” on his mask signifies his dispatch officer number.

Jose Valadez, Rifle police officer and artist, shows the finished design for his rock painting at the Rifle Police Station on Tuesday.

Jose Valadez, Rifle police officer and artist, paints a rock at the Rifle Police Station Valadez paints rocks and leaves them around town for the community to enjoy.

Jose Valadez, Rifle police officer and artist, poses for a portrait last week in front of the Rifle Police Department.

Many of us, if for no other reason than for lax driving habits, have had the occasional brush with a cop.

But how often do you come across a cop with a brush?

You’ve likely never met artist Jose Valadez, also a Rifle police officer. But perhaps you’ve come across one of the pieces of rock art he has painted and distributed in public places including Mesa County, in hopes of making the day of anyone who comes across them.

“It’s super neat. I know, because people have told me. I know that it brings a smile to people’s face, going out for a walk and finding a rock” Valadez painted, he said.

Valadez loves doing things on behalf of others as a policeman, too. He said he always wanted to be a cop. But after rediscovering in recent years his love for making art, he struggles to answer when asked whether he now considers himself a cop who is an artist or an artist who is a cop.

“I don’t know. I hope I’d be viewed as someone who enjoys helping others, doing something for others, positive stuff. I love to see all those people that are also doing that type of stuff for someone else,” he said.

Robin Steffen, office manager and public information officer at the Rifle Police Department, said Valadez has gained local renown as an artist and he isn’t afraid to take on any kind of art project challenge. Some projects have involved getting kids involved in art or making art to benefit community events or entities such as the local hospital and animal shelter.

Valadez is from Mexico and moved to Colorado around age 12. He ended up in Garfield County, where he attended Rifle High School and picked up art through some elective art classes taught by Sandra Minter, who is now retired and living in Mesa County.

“She was great. She was awesome with kids,” Valadez said.

Minter remembers Valadez as “just a real special person, not just as an artist but as a real genuine, moral person.”

Minter appreciated him because he acted as a liaison for a lot of Spanish-speaking students, and would talk with her about art and about problems going on with Latino students.

“He’s always been really observant and he’s able to see the best in people,” she said.

Valadez took some art classes in college. But then he got married, started working full-time and got busy raising three children — two of his own and a stepson. As he describes it, he “just left art for 15 years.”

After attending Colorado Mountain College’s police academy he started as a reserve officer in 2000 at the Silt Police Department and was hired as an officer there the following year. He joined the Rifle department in 2005.

It was there that Valadez said Steffen “brought me back to art.”

He said she asked him to make a banner for a table at a chili cookoff, and then signed him up to work with teens on a spraypainting project at a local arts center.

“I was ‘voluntold,’” he joked with Steffen about the art center work.

Valadez works in a range of media, from spraypaint to watercolor to acrylic to tattoo ink, painting and drawing anything from portraits to animals to vehicles to scenery.

“It’s such an incredible outreach for kids and all ages,” she said.

Valadez, who is divorced, said his rock-painting started following a breakup with a girlfriend. He had read on Facebook about people painting rocks and leaving them for others to find, so he left painted rocks on trails around Rifle where he knew his ex-girlfriend walked, hoping she’d find them and they’d reunite.

“It happened. It was super cool. It got us back together,” he said.

The revived relationship didn’t last, but Valadez still enjoys painting rocks for others to find. He said he’s even been at homes on police calls and seen his rocks in them.

Valadez generally gives away his artwork, except in the case of the tattoo work he does at a local shop. He’s not much for doing commissioned artwork, instead working based on inspiration.

“Unfortunately it has to be from the heart. It has to be something that I want to paint. I would never be able to make it as an artist,” he said.

He said it puts him in a bind when someone asks him to paint something, and he hates letting them down.

“I know my mother’s probably been waiting for a painting for me for probably the better part of 20 years,” Valadez said with a laugh.

He does keep a list of things people would like him to paint. When the mood strikes him to paint something on that list, it’s someone’s lucky day.

Kalina Runyon, records manager and evidence custodian at the police department, said she once asked Valadez to paint her something, and when he asked what she liked, she said horses and butterflies.

“So he did a horse and butterfly” she said, as she held up and admired the resulting painting.

“… I probably asked him a year (earlier) and then one day he came to work with it.”

Valadez delights in making others happy from the art he creates, whether it’s left for them to discover on a trail or intended for them to hang on a wall.

“I just hope to inspire others to do the same, hopefully make somebody’s day by painting something or doing something for others,” he said.