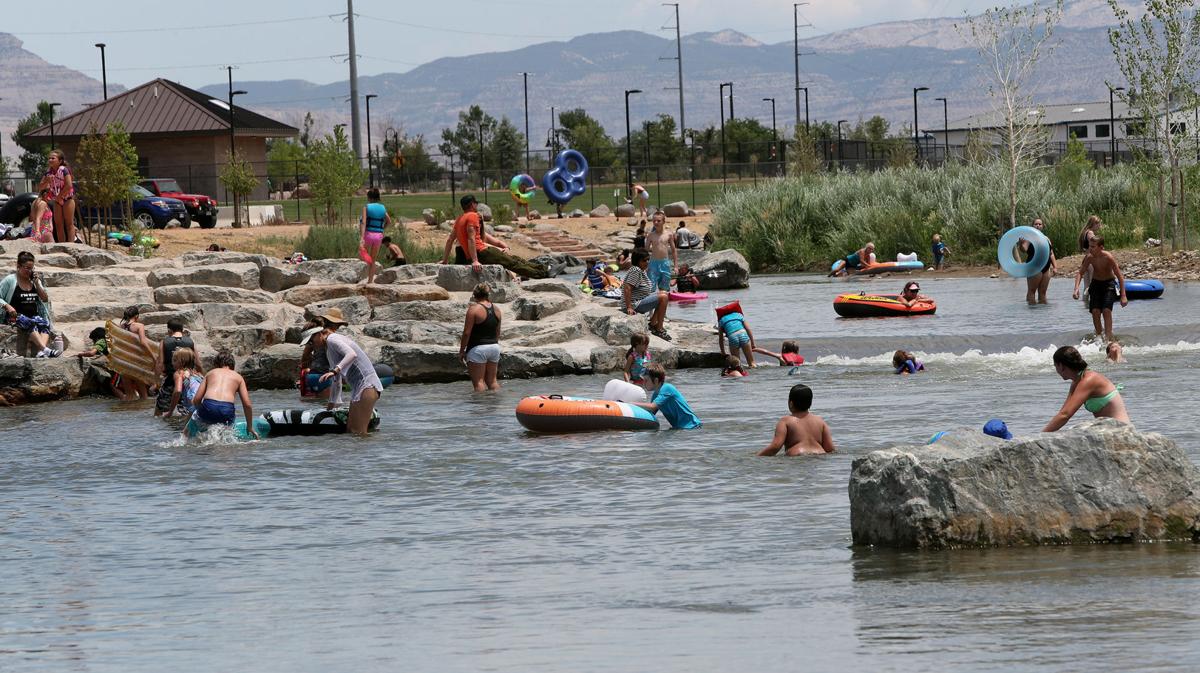 Kids and adults cool off in the water of the Colorado River at the Las Colonias River Park, where water diverted from the Colorado River has become Grand Junction’s newest place to play. The entertainment is cool, and free, but visitors are encouraged to wear life vests because there are no lifeguards posted. 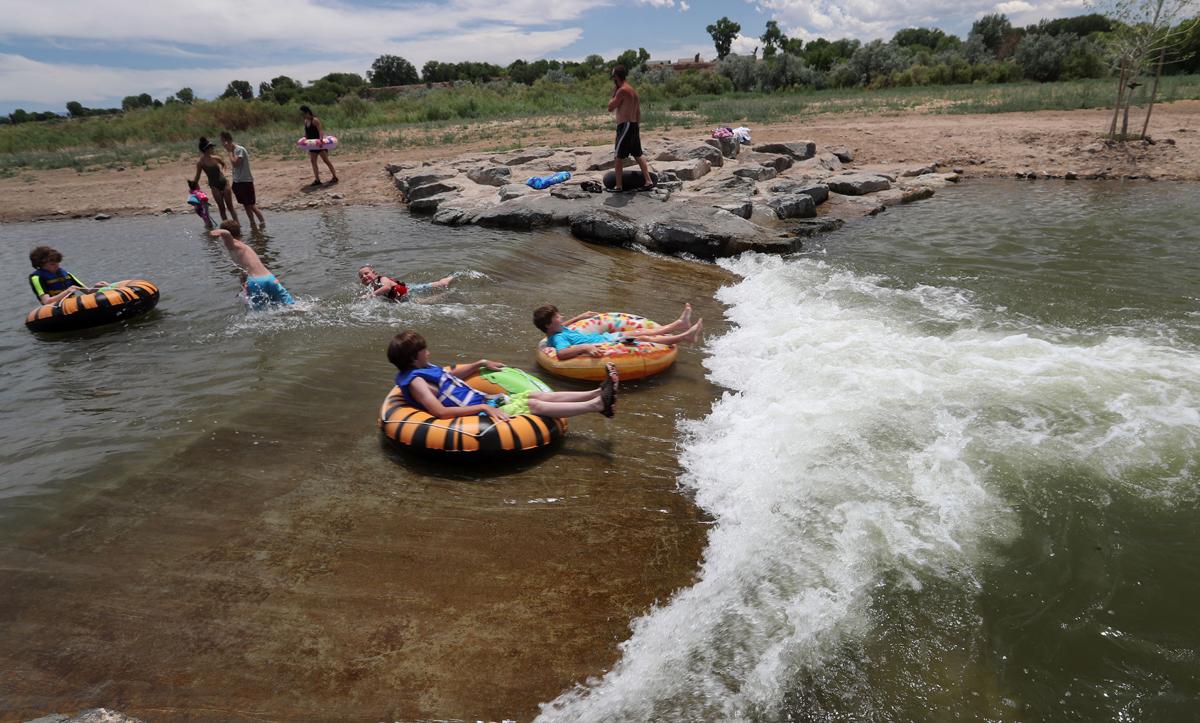 Kids and adults cool off in the water of the Colorado River at the Las Colonias River Park, where water diverted from the Colorado River has become Grand Junction’s newest place to play. The entertainment is cool, and free, but visitors are encouraged to wear life vests because there are no lifeguards posted.

Float tubes bobbed on the water like multicolored doughnuts as the high sun blazed at 90 plus.

Friday afternoon was made for splashing, for squishing mud between toe and sandal in the cool of the Colorado River. Well, almost in the river.

This is River Park at Las Colonias, where water diverted from the Colorado River has become Grand Junction’s newest place to play.

“This is fun. Look at all these happy faces!” said Mary Beth Prodromides, waving a hand at young and old alike ducking under the water or sitting on chairs, rocks or tubes on the west end of the River Park behind Las Colonias Amphitheater.

She was watching her four grandchildren busily moving mud with toys and getting in and out of the water.

They have been coming to the River Park anywhere from one to three times a week with life jackets, water shoes and a cooler full of food, she said.

“They ask me all the time, ‘Are we going to the river beach?’ ” Prodromides said.

So they put on swimming suits and grab towels and go, showing up at different times of the day to see what it’s like and who is there.

There were days the water covered their “river beach” and the current was swift, Prodromides said.

And there were days when the park was very crowded with people cooling off and exploring the area that opened to the public in May.

It has been “extremely satisfying” to see how the park has been embraced and highly utilized, said Ken Sherbenou, parks and recreation director for the city of Grand Junction.

From the river diversion for float tubes and kayaks to the ponds for stand-up paddle boards and kayaks and with the Colorado Riverfront Trail bringing in people on foot or on bikes, “it has been super busy,” he said. “It’s different than anything we’ve had in Grand Junction before.”

And with the River Park’s popularity have come a few rescue calls as some people have gone down side channels between the park and the main channel of the river, he said.

Those were a signal to his department “that we need to ramp up our education efforts,” he said.

To that end, more signs have been put up to remind people where they should or shouldn’t be or how to use the area, and River Park hosts are at the park from 11 a.m. to 7 p.m. each day, he said.

The hosts are stationed near the boat ramp and near the amphitheater, and they also walk the area or roam on a cart distributing information about the park and its rules, such as no glass, no dogs in the water, and no swimming in the ponds.

People who use the park must be responsible for their own safety and their equipment.

There are no lifeguards.

While the water running through River Park is a little more controlled than the flow in the main channel of the river, it still has currents and the water level goes up or down with the river, he said.

It’s definitely a place where parents must be responsible, Prodromides said.

Her No. 1 worry about the park was that one of her grandchildren would be swept away into the river, she said.

That hasn’t happened, but she has been right there with them to make sure that it didn’t.

Because there isn’t an admission fee for River Park, Sherbenou’s department hasn’t been counting the number of people who visit the area each day, but he does know the park seems to be most crowded on the weekends.

“On the weekends, it’s pretty busy,” said Elizabeth Fortushniak, owner and manager of Grand Junction Stand Up Paddle (GJ SUP), which has a shop near the boat ramp on the park’s east end that offers rentals of paddle boards, duckies and tubes as well as various SUP lessons and clinics.

There are some days with time slots when all their tubes are rented out, she said.

And the weekend scene “is a melting pot,” she said.

All kinds of people of all ages are there to enjoy the park. For families with their own float tubes, it’s really affordable fun, Fortushniak said.

They can bring a picnic and make it a full day, she said. Along with utilizing River Park, there’s biking to be had at Dos Rios Bike Park to the west along the Colorado Riverfront Trail and there’s skateboarding at Eagle Rim Skate Park to the south.

It is nice to finally have a place to hang out with family, friends or out-of-town guests that also is near the river, said TJ Smith, who was doing just that on Friday afternoon for the first time.

When he moved to the Grand Valley three years ago, he was kind of surprised that something like the River Park didn’t already exist. It makes sense, he said, and it’s clever to utilize water from the Colorado River to do it.

It has been amazing to see the area’s transformation from barren, crusty dirt to fountains, pools and a float area, said one of Smith’s friends, Chris Seanor, whose two toddlers were in need of naps after a trip through River Park on tubes.

“We were pretty surprised,” Seanor said. “This is a lot more than we thought.”

And work on River Park continues. The next part that will open to the public is the western-most area of the dog park’s three sections, Sherbenou said.

That section was sodded and hopefully will be ready in July. The other two sections were planted with Dog Tuff Turf Grass that is drought-tolerant, resistant to dog urine and holds up well to heavy traffic, he said. Those sections will open next spring.

Another addition to River Park that likely will come soon is food trucks, Sherbenou said.

Having food vendors at the park is one of the top suggestions his department has received, he said. So they are looking at day permits and weekend hours for food trucks.

“It’s such a cool thing to get so many people down by the river,” Sherbenou said.