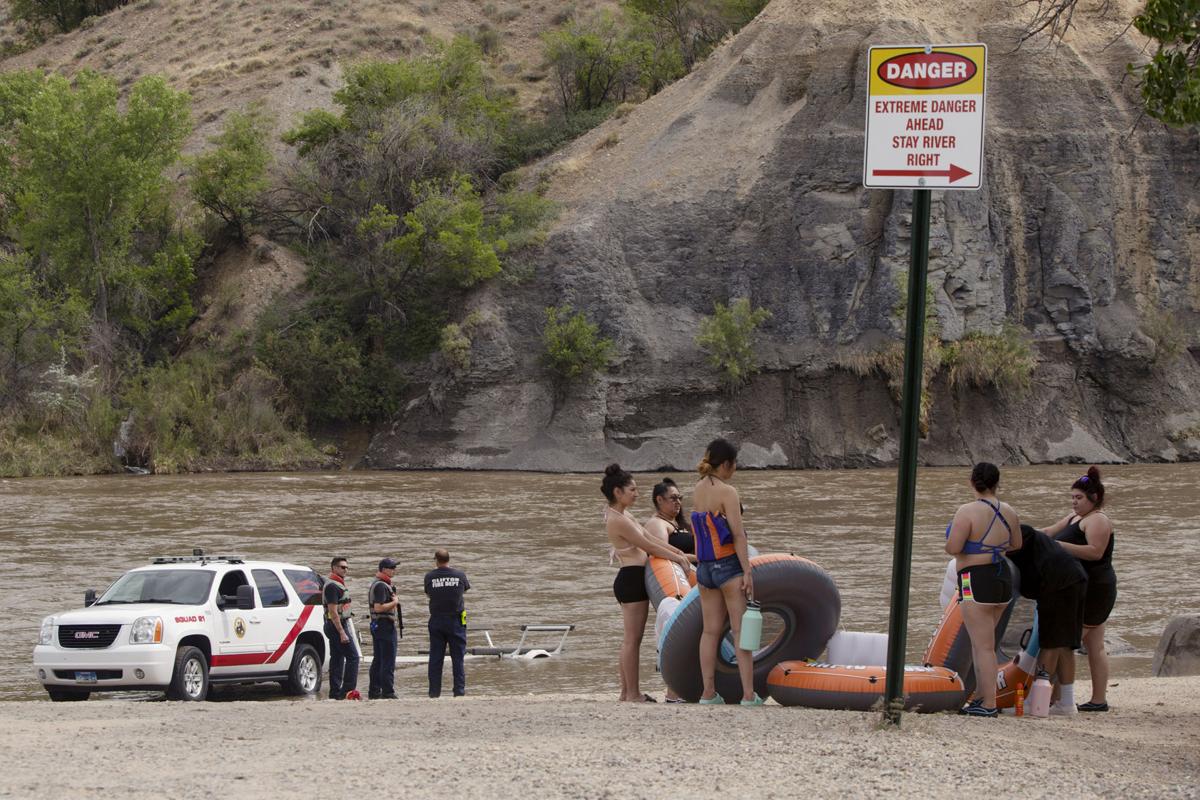 A group of tubers wait to float the Colorado River as the Clifton Fire Department searches for a man who had fallen out of his kayak on Tuesday. Officials with local law enforcement agencies are expecting a lot of river traffic over the Memorial Day weekend. 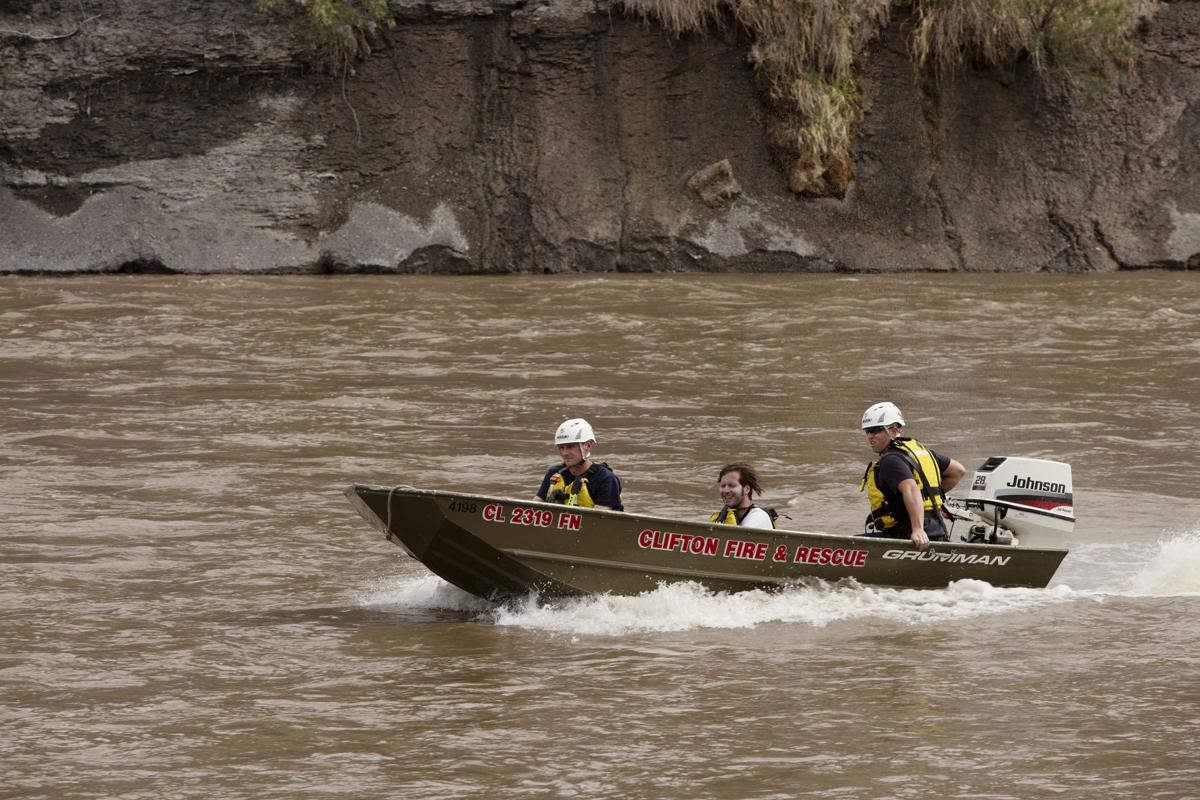 Clifton Firefighters Tyler Watkins and Marc Silingardi drive toward the shore of the Colorado River after rescuing a man who had fallen out of his kayak on Tuesday.

A group of tubers wait to float the Colorado River as the Clifton Fire Department searches for a man who had fallen out of his kayak on Tuesday. Officials with local law enforcement agencies are expecting a lot of river traffic over the Memorial Day weekend.

Clifton Firefighters Tyler Watkins and Marc Silingardi drive toward the shore of the Colorado River after rescuing a man who had fallen out of his kayak on Tuesday.

Between the long weekend, the coronavirus shutdown and warmer weather, river rescue personnel are anticipating a busy few days on the Colorado River.

Residents are already taking to the water and, in come cases, needing an assist to get out. In a rescue on Tuesday, Clifton Fire and other local agencies helped a kayaker back to shore after his vessel flipped in the Colorado River.

Clifton Fire Protection District Chief Charles Balke said his agency deployed a boat from the Corn Lake landing and located the kayaker on the riverbank.

“We made contact with the individual and determined he was OK. We transported him back via our boat back to Corn Lake to be evaluated by an ambulance crew,” he said.

As an organization, Balke said Clifton Fire has been conducting more river training in preparation for an uptick in activity.

“We’re definitely seeing more people out in just the past two weeks recreating on the river,” he said. “Our biggest concern is that we know people want to be out recreating and taking advantage of this great resource, but the undercurrents are extremely strong right now. We want to encourage everybody to wear the proper safety equipment.”

Balke also hoped to see fewer people drinking while they’re on the river this weekend.

“Each morning, crews are making sure the boat is ready to deploy and procedures are in place to deploy when and if it’s needed,” he said. “We can be on scene and deployed in five to seven minutes.”

He plans to be fully staffed for Memorial Day weekend.

Longtime Grand Junction resident Brian Cohee has made river safety a personal crusade. On a rafting trip about eight years ago, Cohee was on the river when an 18-year-old died after falling out of his raft in the area near Fifth Street.

“I witnessed it firsthand. His body was never found,” Cohee said.

Since that day, Cohee has worked to ensure others wear life jackets through the Save-A-Life Jacket program in Grand Junction.

At stations along the river, including near Las Colonias and at the Corn Lake boat launch, life jackets made available by Cohee are there for anyone to use.

“It’s a little program I do on the side and once a week I shuttle the life jackets around and try to make sure stations are always full,” he said.

He said he can lose up to 30 life jackets in a weekend.

“I opened up a month early this year. I thought with all the activity going on, I’d open up early instead of on Memorial Day,” he added. “Too many people go down the river without a life jacket.”

Cohee loves water sports and has been fishing and rafting on the Colorado River many times, though he and his family don’t river raft anymore after a close call.

“There are so many hazards and I know how dangerous it can be,” he said.

At the Mesa County Sheriff’s Office, their boat is ready to be deployed and deputies are prepping for what is expected to be a busy weekend.

“We’ve definitely seen a lot more people taking advantage of the river,” Mesa County Sheriff’s Office spokeswoman Megan Terlecky said. “It’s the time of the year for more people to recreate and we don’t have the high water conditions like last year. Conditions are more accessible.”

She wanted to encourage folks to make smart decisions on the river as a variety of factors, including lower water levels than last year and unexpected snags, can make the river dangerous at spots. Strong winds have also been creating changing conditions, making it even more important for people to use the right equipment designed for the river.

“Something that belongs in a pool can pop pretty quickly,” she said.

On May 13, a large tree branch was removed from the Colorado River under the 32 Road bridge by Mesa County Search and Rescue. Snags like that can be dangerous in getting someone trapped.

According to the National Weather Service, rising temperatures this week led to rising river levels.

In fact, in the past week, river flows at the Colorado/Utah border have climbed from just over 7,000 cubic feet per second to nearly 13,000 cfs, according to flow data from the United States Geological Survey.

“Most sites will stay below any flood concerns. A few areas in the northwest part of Colorado, including the Yampa Basin and some of the smaller rivers, may reach higher levels,” he said. “We’re monitoring it right now.”

Wednesday’s river flow data for the Colorado River at the Utah border had the river flowing at 12,900 cfs. The average for May 20 at that spot in the river is more than 15,100 cfs.