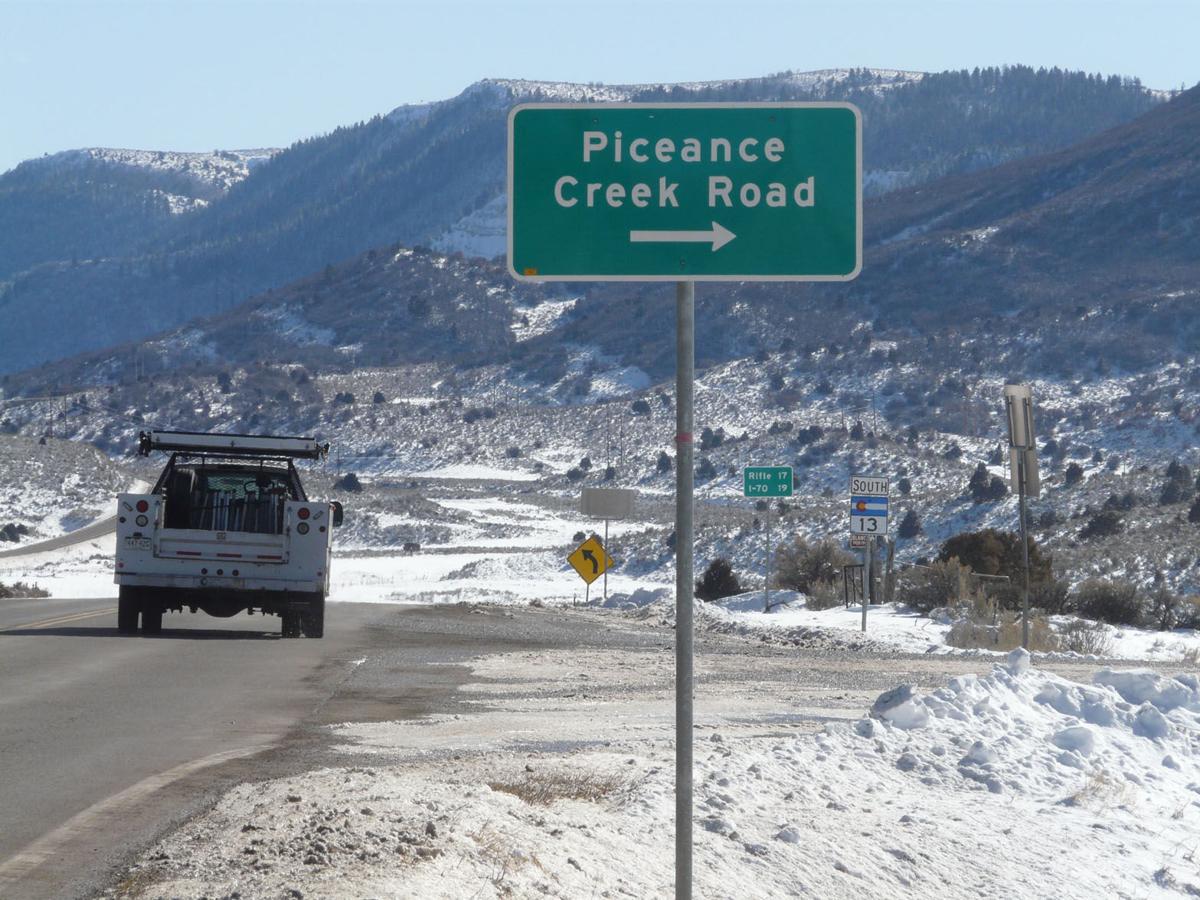 A truck starts the long descent toward Rifle on Colorado Highway 13 where Piceance Creek Road, or Rio Blanco County Road 5, intersects the highway. Acceleration and deceleration lanes on the highway at the intersection, to accommodate energy-industry trucks accessing the Piceance Creek area, are among upgrades planned to improve safety on Colorado 13 if funding allows. Six people died in five accidents on the highway north of Rifle between May and December of last year. 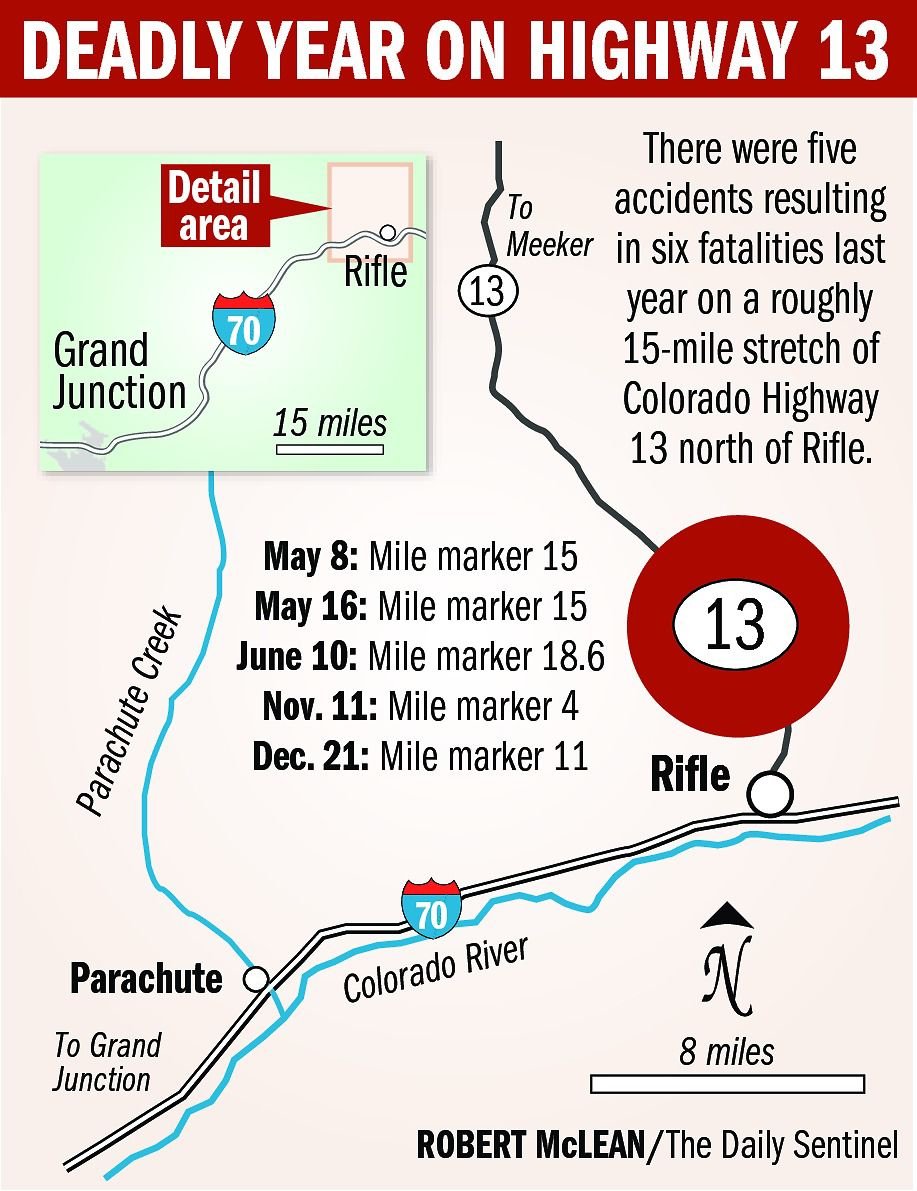 A truck starts the long descent toward Rifle on Colorado Highway 13 where Piceance Creek Road, or Rio Blanco County Road 5, intersects the highway. Acceleration and deceleration lanes on the highway at the intersection, to accommodate energy-industry trucks accessing the Piceance Creek area, are among upgrades planned to improve safety on Colorado 13 if funding allows. Six people died in five accidents on the highway north of Rifle between May and December of last year.

One was a 79-year-old man from Craig.

Another was a 37-year-old mother from the Salt Lake City area.

A third was a 19-year-old Silt man who had enjoyed singing in the school choir before graduating from Coal Ridge High School and had interests ranging from racing cars to someday visiting Alaska.

The three were among six people who died in five accidents last year during an eight-month stretch along a roughly 15-mile stretch of Colorado Highway 13 north of Rifle.

Besides being tragedies for the families involved, the accidents may bolster the case state highway officials have been making for funding for upgrades to improve safety along the road between Rifle and Meeker, and farther north toward the Wyoming border.

Three of the fatalities occurred in two wrecks near mile marker 15, as the narrow highway climbs in Garfield County toward the Rio Blanco County line.

"That would be one of the areas that we're trying to add shoulders and passing lanes," said Dave Eller, transportation director for Colorado Department of Transportation Region 3 in western Colorado.

It's hard to know to what degree safety improvements could result in a different outcome in accidents like those that occurred last year. Capt. Rich Duran, of Colorado State Patrol Troop 4C in Glenwood Springs, noted that driver error appeared to be a frequent factor with last year's accidents. But both he and Eller hope that improvements to the road might provide more margin for error and fewer fatalities in the future.

"Anything we can do with the engineering piece would definitely help," Duran said.

CDOT is seeking $25 million from the federal Transportation Investment Generating Economic Recovery (TIGER) grant program for upgrades between miles 4 and 16.5 north of Rifle, and the state Transportation Commission would match that money with $35 million. CDOT also is seeking $22 million in rural transportation project funding offered as a result of last year's passage of Senate Bill 267 by the state Legislature, for upgrades between miles 16.5 and 22.7.

CDOT has the right of way acquired for the more northern of the two projects, and also has $4 million in funding in hand right now that it can use on either project. Planned upgrades on various stretches of the combined project areas include wildlife fencing and underpasses, a truck chain-up area, passing lanes, and wider shoulders with rumble strips. Acceleration and deceleration lanes are planned where the highway intersects with Rio Blanco County Road 5, the principal truck access route to oil and gas fields in the Piceance Creek area.

"It's all kind of a wish list at this point," Eller said.

He said an answer on the TIGER grant request should come this spring.

Eller said passing lanes are planned in the area where a double-fatal accident happened last May near mile marker 15. Dewey Tafoya died in the accident when he tried to make a pass while heading north up the hill, changed his mind, hit the vehicle he was trying to pass in the process, and then hit a southbound tractor trailer driven by Nathan Nazer of Roosevelt, Utah. Nazer also died.

In the second fatal accident in that same area that same month, Grand Junction resident Troy Friar, 53, drifted off the road in his vehicle and rolled after he overcorrected. Perhaps no amount of road improvements could have prevented that wreck, however. The Garfield County Coroner's Office said his blood-alcohol content was 0.5 percent, more than six times Colorado's legal limit for driving under the influence.

The death of LaPreal Flemings of Salt Lake City occurred just before Christmas when the driver of the vehicle she was in lost control and the vehicle slid sideways, hitting a second vehicle near mile marker 11.

In November, Craig resident Ronald Stieben Jr., went off the edge of the road, lost control and crashed while on his motorcycle just north of Rifle. He died later of his injuries.

In June, Brodie Tiffany of Silt was killed when Paul Matson, 71, of Centennial veered off the side of the road while heading south at mile point 18.6, overcorrected and struck the northbound vehicle Tiffany was driving.

While passing lanes offer obvious safety benefits, Eller also hopes that wider shoulders with rumble strips might reduce some of the occasions of people veering off the roadway, and also provide more space for others to swerve out of the way if a car is heading toward them.

He said his records show three fatalities on Highway 13 from 2012 to 2015, all farther north than where last year's occurred.

"Is it just random?" he asked of last year's spate of fatal wrecks. "I don't know. The road's been like that for a long time."

Duran said drivers need to pay attention and drive according to the road conditions, such as by slowing down if roads are icy. He said wider shoulders and rumble strips could help along curvy Highway 13. He said the road includes some desolate miles of driving where people may lose their attention and get tired, and rumble strips could help prevent people from leaving the road and overcorrecting, as in Tiffany's death.

"It's just a lonely stretch of road between Rifle and Meeker," he said.

Duran said troopers began doing more patrolling on that stretch of Highway 13 last year after the run of fatal accidents began, hoping to get drivers to slow down and start paying more attention. That extra patrolling will continue this year, he said.

Grand Junction attorney Chadwick McGrady, who is representing Tiffany's family in a civil claim against Matson, doesn't think highway conditions played any factor in that accident.

"It's just a bad driver that caused his death," McGrady said.

He said he thinks everyone would agree that making any kinds of improvements to a road makes it safer. But the accident that killed Tiffany involved an inattentive driver going off the road and overcorrecting, he said.

"I think it's fair to say that all roads can be dangerous and some roads are more dangerous than others. Every road's dangerous when you have a driver that's not paying attention," he said.

In the Tiffany case, Matson pleaded guilty in Rio Blanco County to careless driving resulting in death and careless driving resulting in injury, court officials say. He was sentenced to 40 hours of community service, a $500 fine, a year of unsupervised probation on the injury count and a one-year deferred sentence of unsupervised probation for the count involving the fatality.

Among other CDOT plans for upgrades as funding allows on Highway 13 are minor shoulder improvements on a six-mile stretch between Meeker and Craig, and a $43 million project involving passing lanes and shoulders north of Craig. CDOT is seeking Senate Bill 267 money for that latter project.

Eller said Highway 13 long has been the top priority for funding identified by the Northwest Transportation Planning Region, which includes Rio Blanco, Moffat, Routt, Grand and Jackson counties, due to the number of accidents the road sees.

"It hasn't changed. It's been their top priority and it still is," he said.