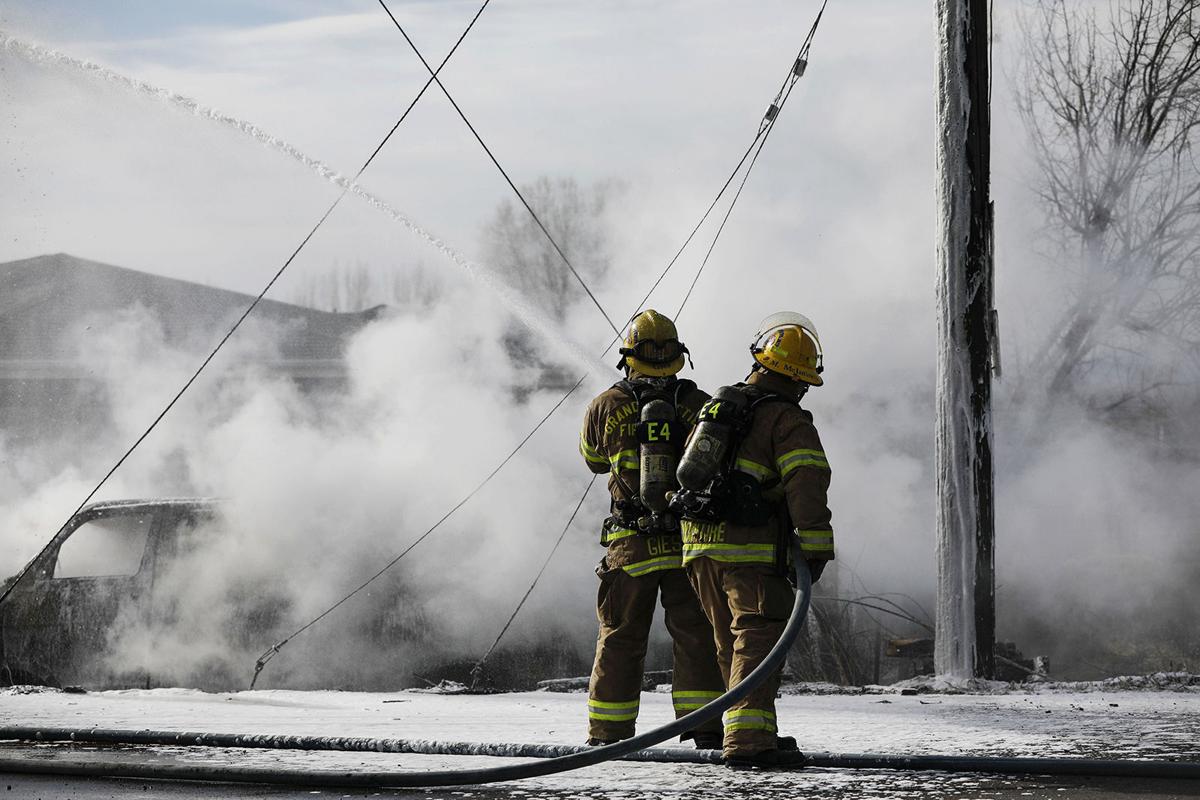 Grand Junction fire crews respond to a motor vehicle collision with power poles in March at the intersection of 30 and D roads. The City Council may ask voters in April for a sales tax increase to build three new fire stations, as well as hire more police officers and repair several roadways. Five options were presented to the council at a Monday workshop. 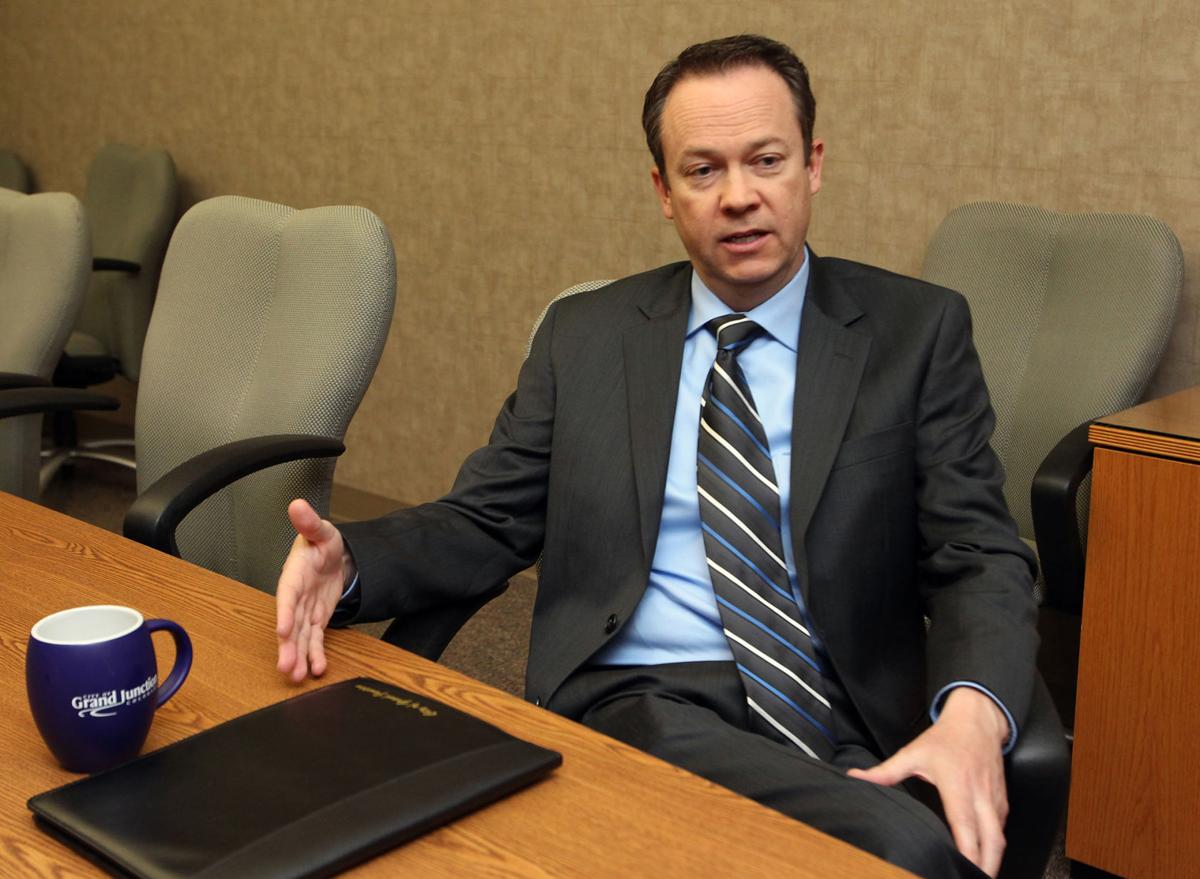 GREG CATON "We've got the site and we will be moving forward with final design in 2019. Right now."

Grand Junction fire crews respond to a motor vehicle collision with power poles in March at the intersection of 30 and D roads. The City Council may ask voters in April for a sales tax increase to build three new fire stations, as well as hire more police officers and repair several roadways. Five options were presented to the council at a Monday workshop.

GREG CATON "We've got the site and we will be moving forward with final design in 2019. Right now."

The Grand Junction City Council is exploring different options for a sales tax increase to put before voters in April to boost revenue for what city leaders claim are understaffed and underfunded fire and police departments.

The council saw five options at its Monday workshop that could raise sales taxes in the city 0.15 percent to 1.25 percent. One of the options includes 0.25 percent for roadway expansions and two include dropping the city's property tax and replacing the money with an extra 0.5 percent in sales tax.

Both the Grand Junction police and fire chiefs say their departments are in need of more personnel — and in the fire department's case, new stations — to meet standard response times and adequately serve the community.

"They want to deliver a high level of service and they're not able to deliver that," Grand Junction City Manager Greg Caton said.

The Fire Department expressed a need for three new stations in 2008, but when the recession hit shortly after, those stations were never built.

Since then, Fire Chief Ken Watkins said the need has only increased as development has brought more residents to the north and northwest portions of the city. Of the city's five operating fire stations, none are north of Patterson Road.

Stations 2 and 3 are the closest to those areas and are overly strained, Watkins said. As such, the department is only meeting response time standards on 52 percent of its calls. The goal is 90 percent.

"It puts stress on closer locations," Watkins said. "It wears on folks. If we can get these stations, it helps us recruit."

Each new station would need to be staffed by 21 firefighters.

Police Chief Doug Shoemaker said any extra funds going toward his department would go toward personnel as he hopes to grow to 142 sworn officers and add 13 civilian personnel. The department has capacity for 120 sworn officers, but is short of that mark. If the city adopts its proposed budget for 2019, that number will grow to 124. The extra personnel on top of that would cost $3.3 million for 31 new positions earmarked in the tax increase.

The extra personnel would allow officers to spend time doing more preventative police work such as speaking at schools, looking for DUI drivers and foot patrol.

"If you go call-to-call-to call, it's difficult to find resolutions, especially with mental health calls," he said.

One of the options presented to council and put together by city staff suggested a 0.5 percent sales tax increase in the city, with 0.35 percent going to the Fire Department and 0.15 going to police.

Other options included placing just the police or fire option on the ballot.

In the final option, which looped in 0.25 percent for roadwork, the city identified $184 million in needs. Some of the projects this tax could help fund include building an interchange at Interstate 70 and 29 Road, widening of 24 and 25 roads and improving the interchange at Riverside Parkway and 24 Road.

If any of these options go to the ballot and are approved, the city would see its 2.75 percent sale tax go up. Shoppers currently pay 8.02 percent in total sales tax, including county and state taxes.

Caton noted that city sales taxes are mostly paid by non-residents. Only 22 percent of collected city sales tax is paid for by Grand Junction residents while 18 percent is paid by residents of Fruita, Palisade and unincorporated Mesa County. The remaining 60 percent comes from those outside the area and businesses who purchase items.

Councilors discussed the possibilities Monday and the response was mixed on the options that included doing away with the city property tax and the roadway expansion.

"I would rather keep transportation out for the time being," Councilman Rick Taggart said, adding that he thought the property tax portion could be confusing to voters.

It wasn't known at the meeting what percentage of voters owned property in the city and would benefit from this option. About 38 percent of property tax income is from residential property, with the rest coming from commercial property owners.

The council will revisit the matter in two weeks at its next workshop, when it will also discuss a sales tax increase option for a community center. The city has committed to placing a sales tax question on the ballot in April to fund a new community center at Matchett Park.

Councilman Duke Wortmann said he believed residents could very well decide to fund both a 0.5 percent sales tax increase for police and fire and a similar amount for a community center if they see the need.

Councilwoman Phyllis Norris pointed out that Grand Junction has a lower sales tax than many other municipalities.

The last time the council put a sales tax increase item on the ballot for police and fire was in 2008, when a 0.25 percent increase was defeated by voters. The tax would have raised $98 million, mostly for capital projects.

Caton said that money mostly goes toward funding the city's portion of the regional communications center. Some of it will go to purchase a new fire truck. But overall, it doesn't meet the needs of both departments.

"We're at a point if it's not approved, we'll have to make operational changes that will include a reduction of services and not meeting operational standards," Caton said.

The Grand Junction City Council is considering asking voters to approve a sales tax increase next spring to fund public safety, roads or both. Here are some options presented by staff:

The Grand Junction City Council is considering asking voters to approve a sales tax increase next spring to fund public safety, roads or both.

Here are some options presented by staff: