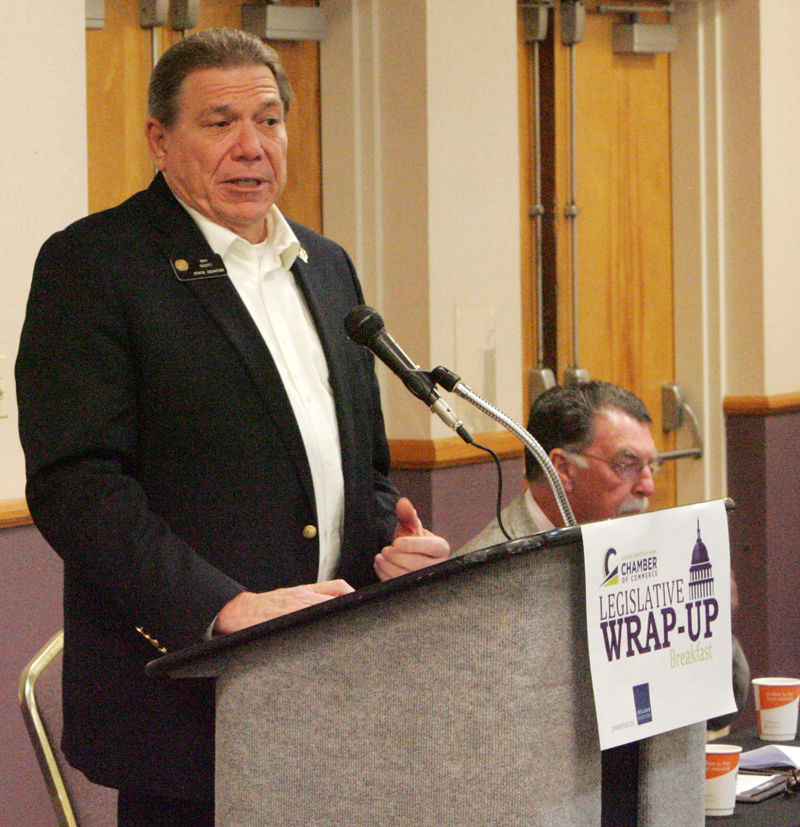 Sen. Ray Scott, R-Grand Junction, talks about his accomplishments during this year's session of the Colorado Legislature on Tuesday at the Grand Junction Area Chamber of Commerce's annual legislative wrap-up meeting. 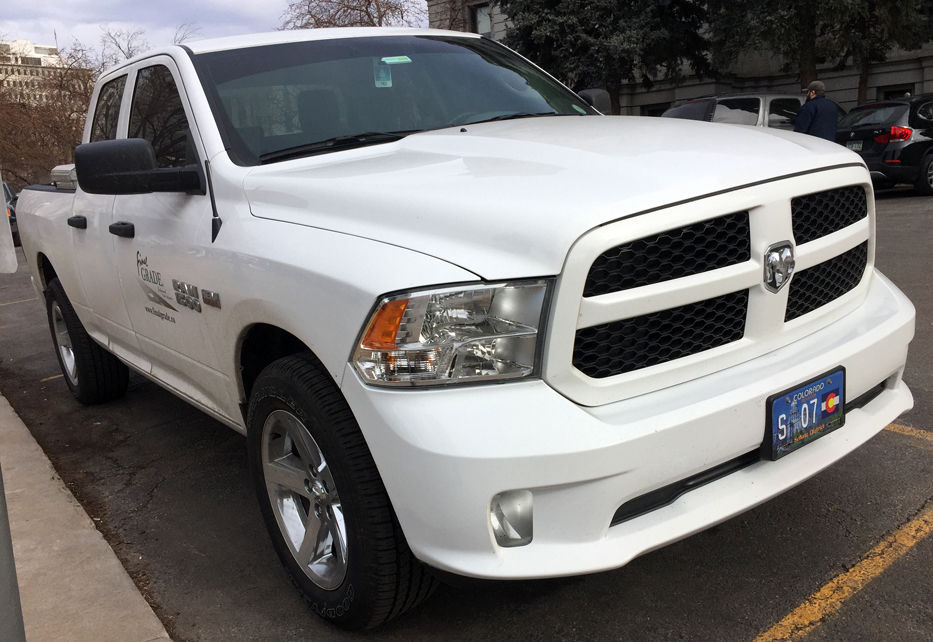 Sen. Ray Scott, R-Grand Junction, parked his white Dodge Ram 1500 at the Capitol throughout the session. The vehicle, which sports his S-07 license plate, has the name of the company he works for on the side, First Grade Excavating.

Sen. Ray Scott, R-Grand Junction, talks about his accomplishments during this year's session of the Colorado Legislature on Tuesday at the Grand Junction Area Chamber of Commerce's annual legislative wrap-up meeting.

Sen. Ray Scott, R-Grand Junction, parked his white Dodge Ram 1500 at the Capitol throughout the session. The vehicle, which sports his S-07 license plate, has the name of the company he works for on the side, First Grade Excavating.

Sen. Ray Scott billed state taxpayers for more than $1,000 in Uber rides during this year's legislative session — expenses he also claimed on his campaign finance account.

While the Grand Junction Republican later corrected his campaign account for all of those Denver Uber trips, he did so only after The Daily Sentinel questioned him about the discrepancies in the two filings.

"I gave my treasurer the wrong info," he said in a text message.

Even though Scott had a vehicle at the Capitol when he was in Denver during the 120-day session, Scott used Uber 47 times at a cost of $1,801. He said all of those trips were for campaign purposes.

But 17 of them also were listed in his state travel expense reports during the four-month session. He was reimbursed by the state for those trips, all to Denver International Airport, for a total of $1,037, according to Scott's travel reimbursement expense reports obtained by the Sentinel through a Colorado Open Records Act request. Those reimbursements were on top of money the state paid him in travel costs, including $11,811 worth of plane flights to and from Grand Junction.

Along with more than $2,200 in reimbursements for vehicle mileage, Scott was reimbursed nearly $15,000 in travel costs during the session. Those travel reimbursements came on top of the $25,200 he received in per diem pay.

It is a violation of state campaign finance laws for lawmakers to be reimbursed for the same expense from the state and a campaign account. Scott, however, is unlikely to be punished over the matter. Legal ramifications would potentially arise only if an official complaint was filed and a state administrative law judge ruled against the senator, which hasn't occurred, according to the Colorado Secretary of State's Office.

Even if a complaint was filed, Scott would have 15 days to correct the violations without repercussions. Last year, the Legislature approved a bill that allowed for that correction period, a new law that Scott's primary election opponent, Rep. Dan Thurlow, got passed after his own campaign finance violations.

Scott didn't explain why he used an Uber rather than his own vehicle. He daily parked his white Dodge Ram 1500 at the Capitol that he uses for his job as a consultant for First Grade Excavating. The senator uses his legislative S-07 license plate, which refers to the Senate district he represents, on that pickup.

Those trips around Denver averaged about $55 each, with some as low as $10 and others as high as $75.

According to Scott's latest campaign finance report filed this week, the senator who is running for re-election this year had raised nearly $20,000 since January. During that same period, he spent about $13,000, nearly $5,000 of which went to food, travel and lodging expenses.

In addition to numerous Uber trips over the past six months, Scott spent $4,121 for travel and lodging and more than $7,700 for food, all charged to his campaign account. Those food expenses were for such things as $9.34 at Burger King in Grand Junction, $18 at the Ball Fruit stand in Palisade and $21.51 at the Africa Lounge in the Seattle-Tacoma International Airport.

Thurlow also was reimbursed for travel expenses from Denver to Grand Junction, as is allowed by law for all lawmakers, but he only claimed road miles.

His travel reimbursement reports show he claimed about 1,000 miles a month. The state pays 49 cents a mile. If Thurlow had returned to Grand Junction by car every weekend during the session, as many lawmakers do, he could have claimed more than 2,100 miles each month.

Thurlow listed no travel or food expenses in any of his campaign filings with the Colorado Secretary of State's Office.

"In addition, when we are in session from the middle of January to the middle of May, the state reimburses us for the expense of living in Denver," Thurlow said. "If you also reimburse yourself from your campaign account, that sounds like double-dipping."

While nearly all of Thurlow's money has come from individuals who live inside Senate District 7, which comprises all of Grand Junction and Mesa County, Scott received a lot of outside money, some of which was funneled through nine right-leaning political action committees.

All of those groups, which have names like the Constitutional Liberty Fund or the Right Leadership PAC, were formed by the same GOP political operative, Katie Kennedy, who makes a living doing such work. Each group receives its funding from large corporations, and all the same ones, such as Noble Energy, MillerCoors, Pfizer and Comcast. Altogether, they gave Scott $3,600.

Scott also received $350 from former state Rep. Gordon Klingenschmitt, a controversial internet evangelist who has made national headlines for some of his statements, including saying in 2015 that a Longmont woman who had her unborn child cut out of her womb was evidence of a "curse of God" for abortion rights.

Scott also received more than $1,800 from several liquor stores in the Grand Valley, and $4,280 from the Colorado Licensed Beverage Association, whose members are liquor stores. Some of that money came from an April fundraiser organized by Fisher's Liquor Barn to thank Scott for introducing a bill designed to help privately owned liquor stores compete with grocery and convenience stores that will be able to sell full-strength beer starting next year.

Scott later killed his own bill because a nearly identical one ended up getting through the Legislature, one that was watered down from its original version.

In addition to the $18,200 Thurlow transferred from his expired House account, the two-term representative collected $14,600 since January and another $7,500 in the past two weeks for his Senate bid.

Thurlow was one of only two House Republicans to support a bill to allow family or law enforcement to get special restraining orders from a judge to temporarily remove firearms from the hands of mentally ill people. Ceasefire supported that bill.