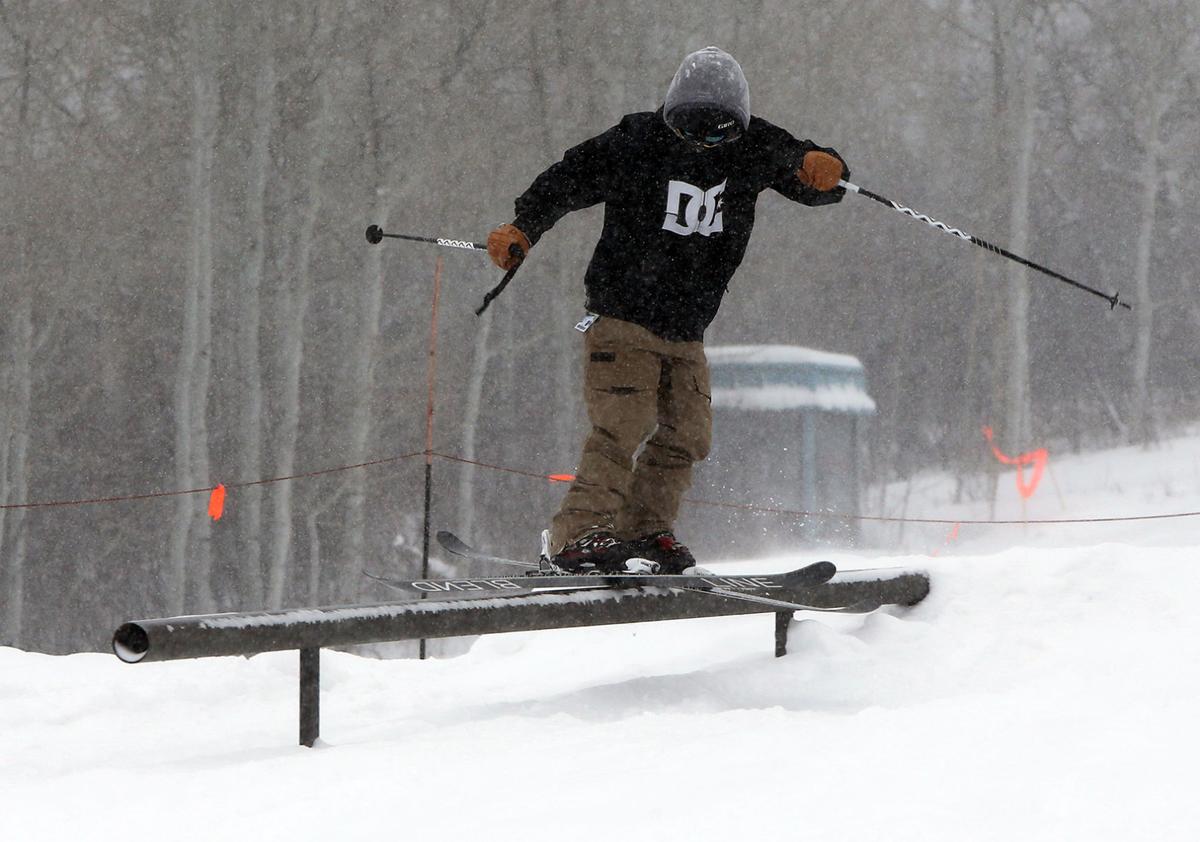 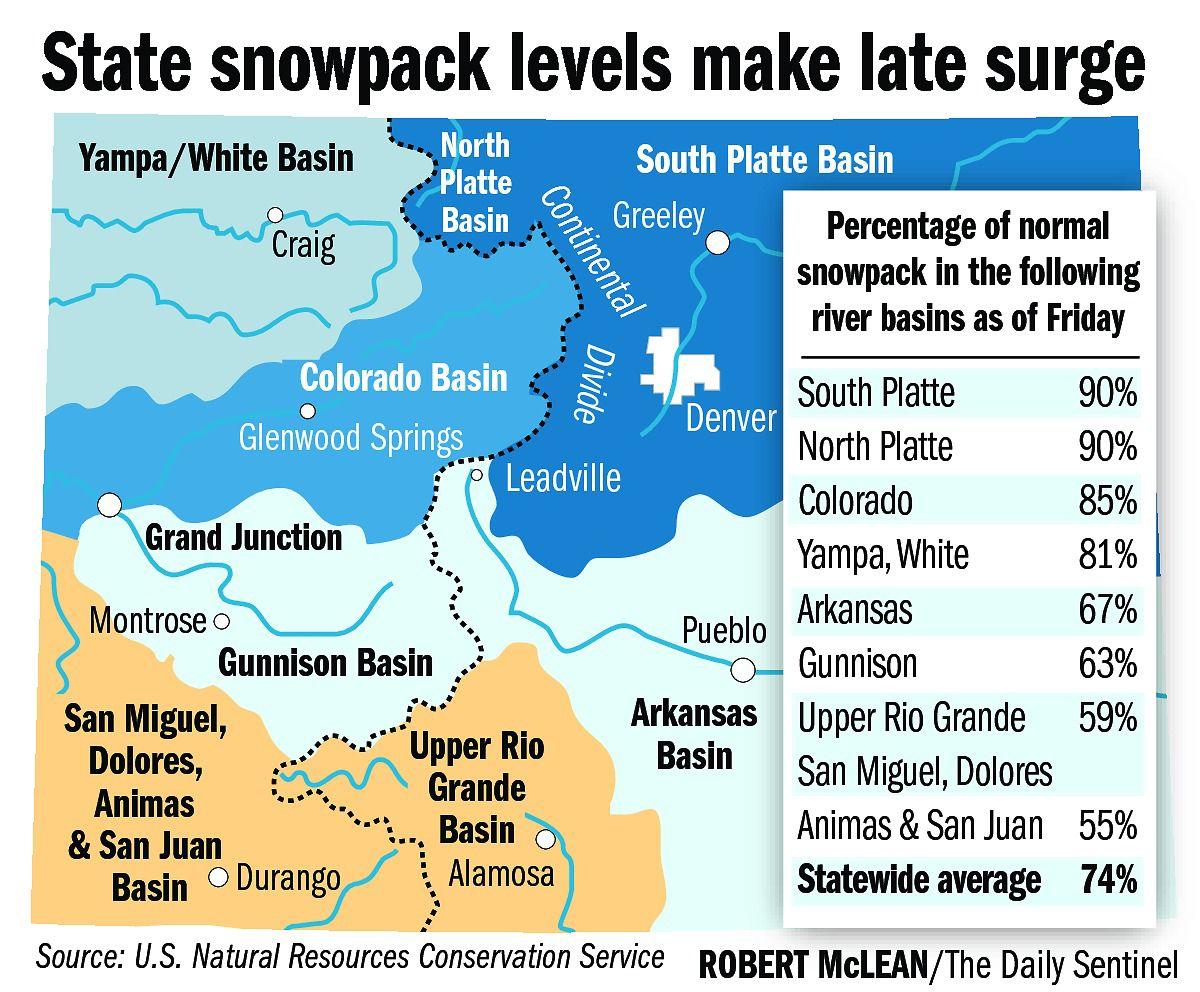 A welcome recent turn in the weather is not only cheering skiers but has provided an impressive boost to Colorado's snowpack levels, particularly in the especially dry southwest part of the state.

But despite the reprieve, the odds still are poor for snowpack to recover to normal levels before the spring runoff begins, observers say.

The statewide snowpack reached 74 percent of normal as of Friday, according to the Natural Resources Conservation Service. That's up sharply from 59 percent as of the start of the month.

Chris Cuoco, senior forecaster at the National Weather Service in Grand Junction, said basin-by-basin increases since Feb. 1 are even better than he'd realized until checking the data. They include:

■ The Yampa/White River basins, at 81 percent of median Friday, up from 72 percent.

■ The Upper Colorado River Basin, 85 percent, up from 75 percent.

■ The San Miguel/Dolores/Animas/San Juan basins, 55 percent, up from 36 percent.

"It's a better increase than I would have thought, so that's good — (up) to the tune of 20 percent down south, so that's a pretty good jump," he said.

Nevertheless, the snowpack deficit remains significant. Karl Wetlaufer, assistant snow supervisor for the NRCS Colorado snow survey program, says that with less than two months left in the typical snow accumulation season, the kind of snowfall needed to reach peak accumulation has happened only twice out of the last 36 years.

Klaus Wolter, a research scientist in Boulder with the National Oceanic and Atmospheric Administration and the University of Colorado, said the recent shift to a wetter weather pattern, while good news, is "a Hail Mary pass that's not going to succeed. It's not going to turn the game around."

Abundant recent snowfall enabled Powderhorn Mountain Resort to return to a seven-day-a-week schedule this week. Resort spokesman Ryan Robinson said Powderhorn had gotten 6 or 8 inches for the day as of late afternoon Friday, 8 inches the prior 24 hours, and almost four and a half feet over the last two weeks.

But Wetlaufer said that even with the snowier weather of late, three automated snow measurement sites on Grand Mesa remained at record-low levels as of Thursday, based on records dating back 29 to 40 years, depending on the site.

A breakdown in a high-pressure ridge over the western United States has allowed storm systems to move through the state, particularly more to the south where snowfall has been meager this winter.

Cuoco said it appears a series of not particularly strong storms will continue bringing snow to the region over the next week or two.

One challenge with trying to play catch-up in terms of snowpack right now is that this is normally a pretty snowy time of year, Cuoco said.

Making up a snowpack deficit requires that it not just snow, but snow even more than normal at a time of higher typical snowpack accumulation, which Cuoco compared to trying to catch up to an accelerating car.

"Luckily though (the weather) did turn around and the snow is beginning to pile up and we're incrementally chipping away at that deficit little by little with every storm that comes in," he said.

While Cuoco is happy about the snow for the sake of skiers, as the fire weather program leader for the local National Weather Service office, he's also hoping the wetter weather now might mean a less severe fire season this summer.

He noted that as of Tuesday, southwest Colorado was listed as being in extreme drought, with much of western Colorado in severe drought.

Runoff from snowpack is crucial for agricultural and municipal water supplies in Colorado.

Both Wolter and Wetlaufer worry about a dearth of snow at some lower-elevation sites across the state.

"That has been a kind of a trend this year," Wetlaufer said.

Said Wolter, "It's a lot worse than it looks higher up and that's a combination of things, but certainly the warm weather that we had for most of the winter except this week hasn't helped."

And while Colorado has been blessed by some wet Mays in recent years, "I just don't see the writing on the wall in that direction" this year, Wolter said.

The National Weather Service Climate Prediction Center currently is saying there's a probability of both warmer and drier conditions than normal in Colorado over the next three months.

Meanwhile, Jeff Derry, executive director of the Center for Snow and Avalanche Studies in Silverton, is sounding another concerning note about this year's snowpack.

At a field site on Red Mountain Pass, the center's Colorado Dust-on-Snow program monitors weather events that blow dust onto Colorado's mountains in the winter, which can accelerate melting once that dark dust layer is exposed to sunlight in the spring.

Derry wrote on the center's website that winds gusting up to 83 mph out of the southwest early this week resulted in the first significant dust storm the center has observed this season.

"Because this event is more than a meter from the ground in the snowpack, we expect this event to have hydrologic consequences once exposed in the spring," he wrote.

He said the dust-on-snow program team will begin statewide sampling tours in March to determine the extent and severity of the dust storm, "which is likely widespread with locales like Aspen Mountain reporting dust arriving on this storm front."