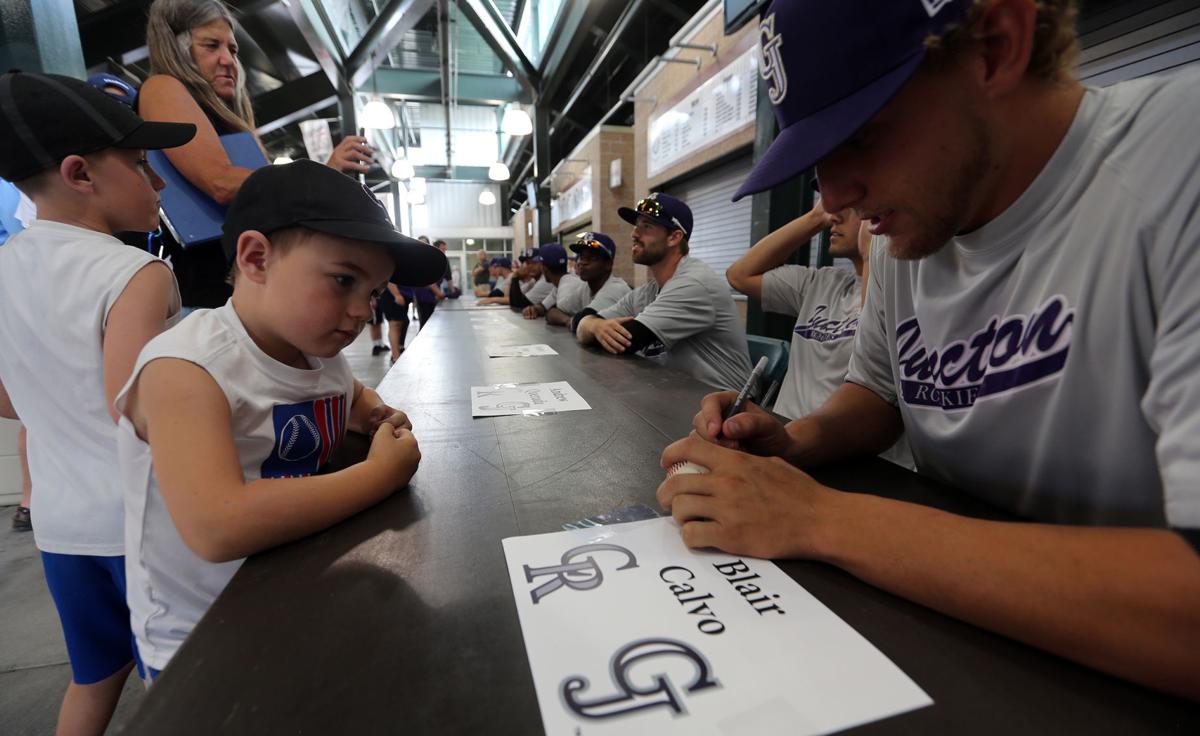 Blair Calvo with the Grand Junction Rockies signs an autograph for a young Rockies fans at a meet-and-greet at Suplizio Field in May 2019. 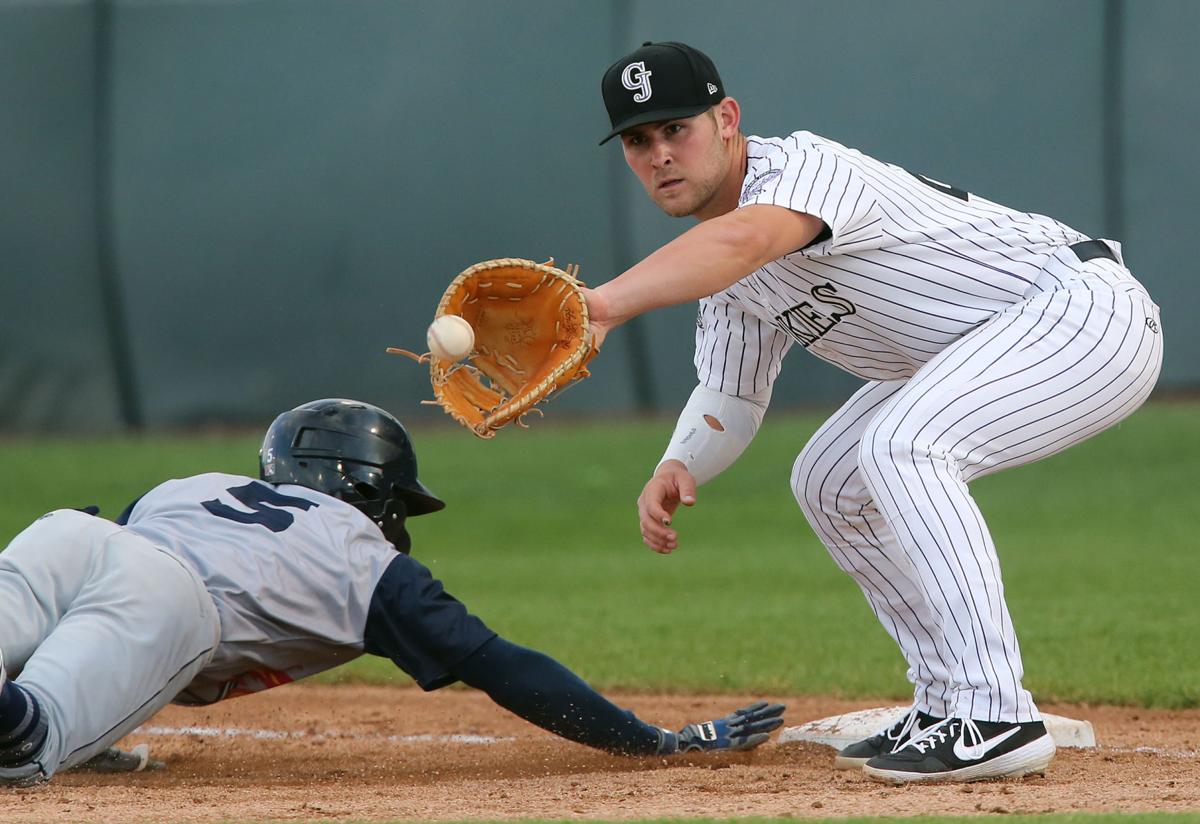 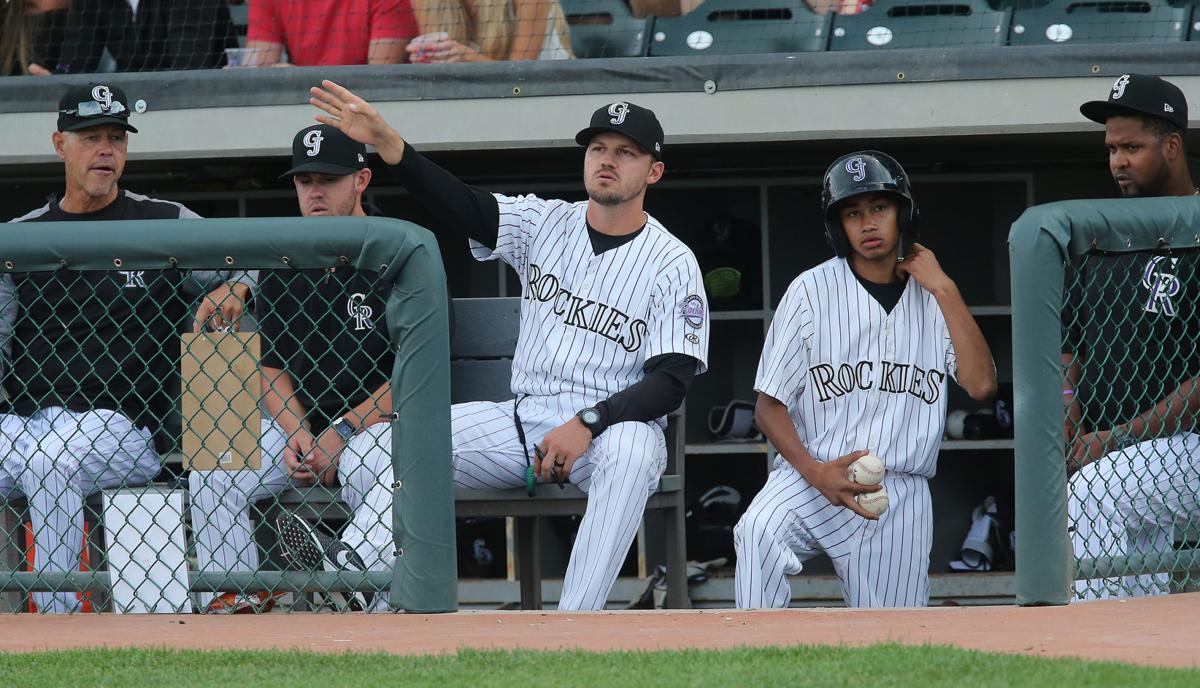 Grand Junction Rockies manager Jake Opitz, center, isn’t concerned about the future of the team, he’s only focused on this season. The GJ Rockies are one of 42 minor league baseball teams that will be cut if Major League Baseball and Minor League Baseball can’t reach an agreement on what to do about the minors. Not having a professional baseball team at Suplizio Field means fans wouldn’t be able to watch players, like pitcher Alex Haynes, start their pro careers.

Blair Calvo with the Grand Junction Rockies signs an autograph for a young Rockies fans at a meet-and-greet at Suplizio Field in May 2019.

Grand Junction Rockies manager Jake Opitz, center, isn’t concerned about the future of the team, he’s only focused on this season. The GJ Rockies are one of 42 minor league baseball teams that will be cut if Major League Baseball and Minor League Baseball can’t reach an agreement on what to do about the minors. Not having a professional baseball team at Suplizio Field means fans wouldn’t be able to watch players, like pitcher Alex Haynes, start their pro careers.

Mick Ritter is greeted around Grand Junction with the same question:

“Are you guys staying?”

The first-year president of the Grand Junction Rockies can answer with a definitive “yes” — for this season, at least.

After that, he’s like everyone else, wondering what’s going to happen not only with the GJ Rockies, but 41 other Minor League Baseball teams, including the entire Pioneer League where the Rockies play.

Ritter attended the baseball winter meetings last month in San Diego, hoping to get some answers about the future of his club. Instead, it was more speculation and questions.

“We’re still under contract with Minor League Baseball,” Ritter said earlier this week once the club offices opened after the holidays. “There wasn’t much that was said differently. That’s what we were hoping, but still, as of right now, there hasn’t been (any new information released).”

The two entities met during the November winter meetings but the issue is far from settled. MiLB is pushing back at Major League Baseball’s plan to do away with the Pioneer League as well as dozens of other clubs, all the way up to Double-A.

The sides had planned to meet earlier this week, but a conflict postponed that meeting, said Jeff Lantz, the communications director for Minor League Baseball. He expects negotiations to continue this month.

“Our goal is to keep all 160,” Lantz said. “We feel like there’s value in all those cities for professional baseball. Obviously some cities don’t draw attendance-wise as others on that list. Princeton, West Virginia, is never going to draw what Staten Island draws or Lexington, Kentucky, draws, but there’s value in having a team in Princeton. There are baseball fans there.

“Our goal is to keep as many of these teams in business as we can.”

“Every season ticket holder is asking, ‘Are you guys going to be here?’ ’’ Ritter said. “Matt (Allen, GJ’s operations manager) and I get stopped in the grocery store all the time. We want to be here forever.”

Some fans are confused, thinking the Rockies’ run in Grand Junction is over before their ninth season begins in June. That’s not the case — the Professional Baseball Agreement between Major League Baseball and Minor League Baseball runs through the 2020 season.

Among MLB’s concerns are playing facilities and the long road trips for minor league teams.

Lantz said all 160 teams are in compliance with MLB’s current stadium requirements — each minor league stadium is inspected every three years.

Minor League Baseball doesn’t dispute long travel, Lantz said, and knows some stadiums could use a facelift. If MLB wants to change stadium criteria, Lantz said, the owners of the stadiums need some time to get up to speed.

Members of the Grand Junction Parks and Recreation Department and Parks Improvement Advisory Board are working on the master plan for the stadium and hope to have the stadium needs prioritized early this year, Ken Sherbenou, the new director for Parks and Rec, said in an email.

Should MLB prevail and the Grand Junction Rockies end up disbanding — likely becoming the Arizona Rockies — 8-10 students from Colorado Mesa University would lose internships, plus another 10 or so students working for CMU-TV, which broadcasts home games. The club also employs between 80-100 seasonal workers, Ritter said.

The stadium grounds crew added one fulltime employee and some additional seasonal help when the Rockies moved to town. A home game requires about 56 man hours when the Rockies are in town, starting shifts at 6 a.m. and ending about 10:30 p.m., according to Marc Mancuso, the stadium supervisor.

Ritter is one of three fulltime front-office employees with the GJ Rockies, and as a guy who grew up in Grand Junction, he doesn’t want to see the day he packs up the office at Suplizio Field.

“We want to be here forever with the Grand Junction Rockies,” Ritter said. “Growing up here, I wouldn’t want to leave again.”

What is at the center of negotiations to keep minor league baseball from changing.

Nov. 15, 2011: The City of Grand Junction and GJR, LLC, finalize a contract to bring Minor League Baseball to Grand Junction. The contract is for 15 years, through the 2026 season, with three five-year extensions at the Rockies' option.

June, 2012: David Dahl is the top pick of the Colorado Rockies in the amateur draft and is is the first draft pick assigned to play in Grand Junction. The center fielder was the Pioneer League MVP in 2012 and led the Rockies to the league playoffs.

July 20-21, 2012: Colorado first baseman Todd Helton makes a rehab appearance with the Rockies, playing two games in front of crowds of more than 5,000.

July 10, 2013: Pitcher Jon Gray makes his professional debut at Suplizio Field, throwing three innings in a 10-6 victory over Billings. Gray allowed four runs on seven hits and struck out one, reaching 98 mph on his fastball.

July 21, 2016: Riley Pint, an 18-year-old rookie pitcher who was the fourth player taken in the MLB draft, makes his home debut at Suplizio Field in front of more than 2,000 fans. He hit 98 mph with his fastball.

December, 2016: Tony Diaz, the Rockies' original manager who became GJ's development coordinator, is hired as the first base coach of the Colorado Rockies. He's now the third base coach for the Minnesota Twins

Sept., 2018: The GJ Rockies play in the Pioneer League Championship Series for the first time in franchise history, losing both games to Great Falls, Montana.

July 29, 2018: Outfielder Matt Holliday reports to Grand Junction after signing a contract to return to the Colorado Rockies.

October, 2019: Joe Kubly resigns as GJ Rockies president and is replaced by Mick Ritter, who had been the assistant general manager since 2016.