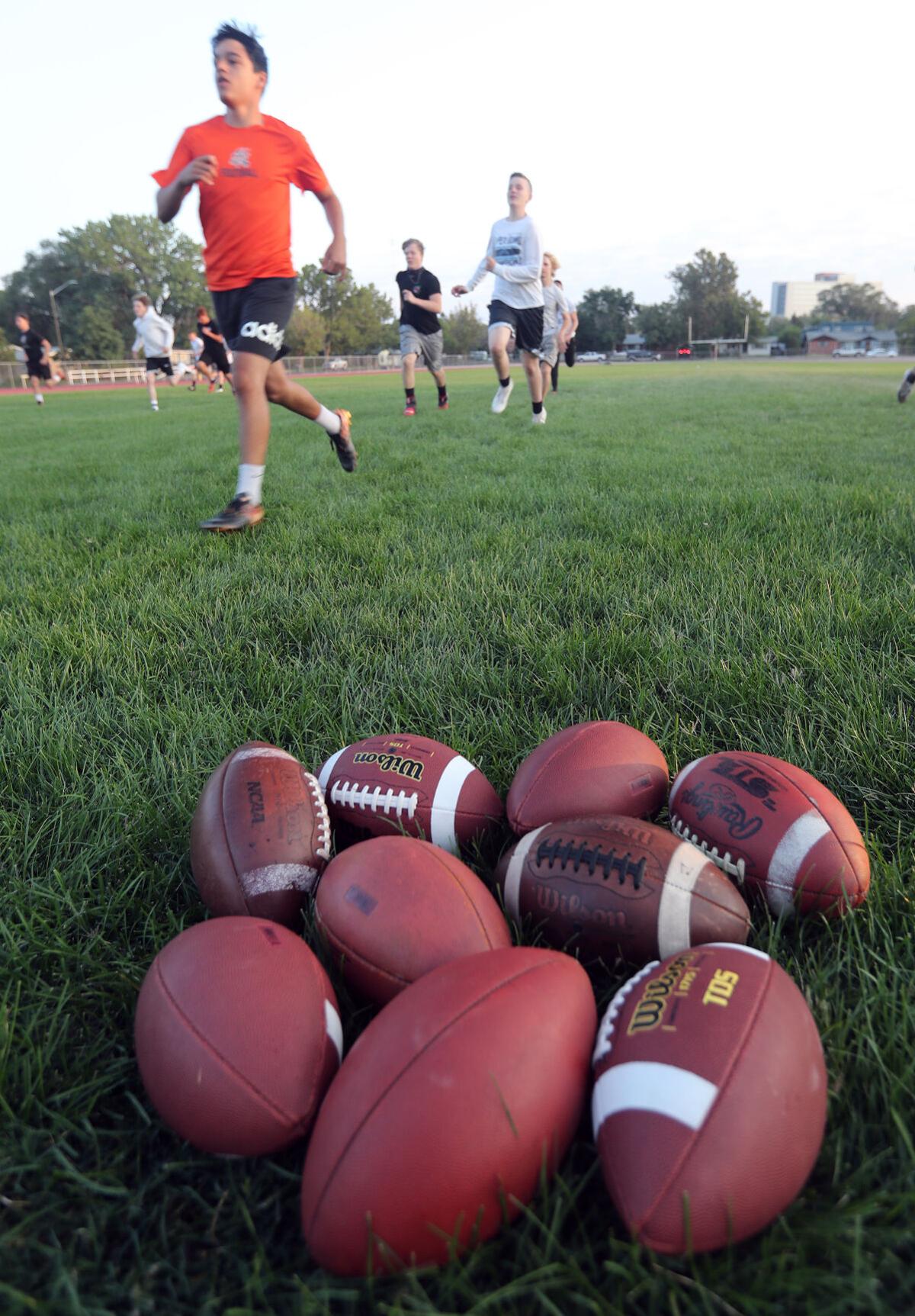 District 51 football players worked out all summer, hoping to get a jump-start on this fall's season. The season was then pushed to spring, but the past week has been a whirlwind on on-again, off-again speculation that Colorado could play again this fall. 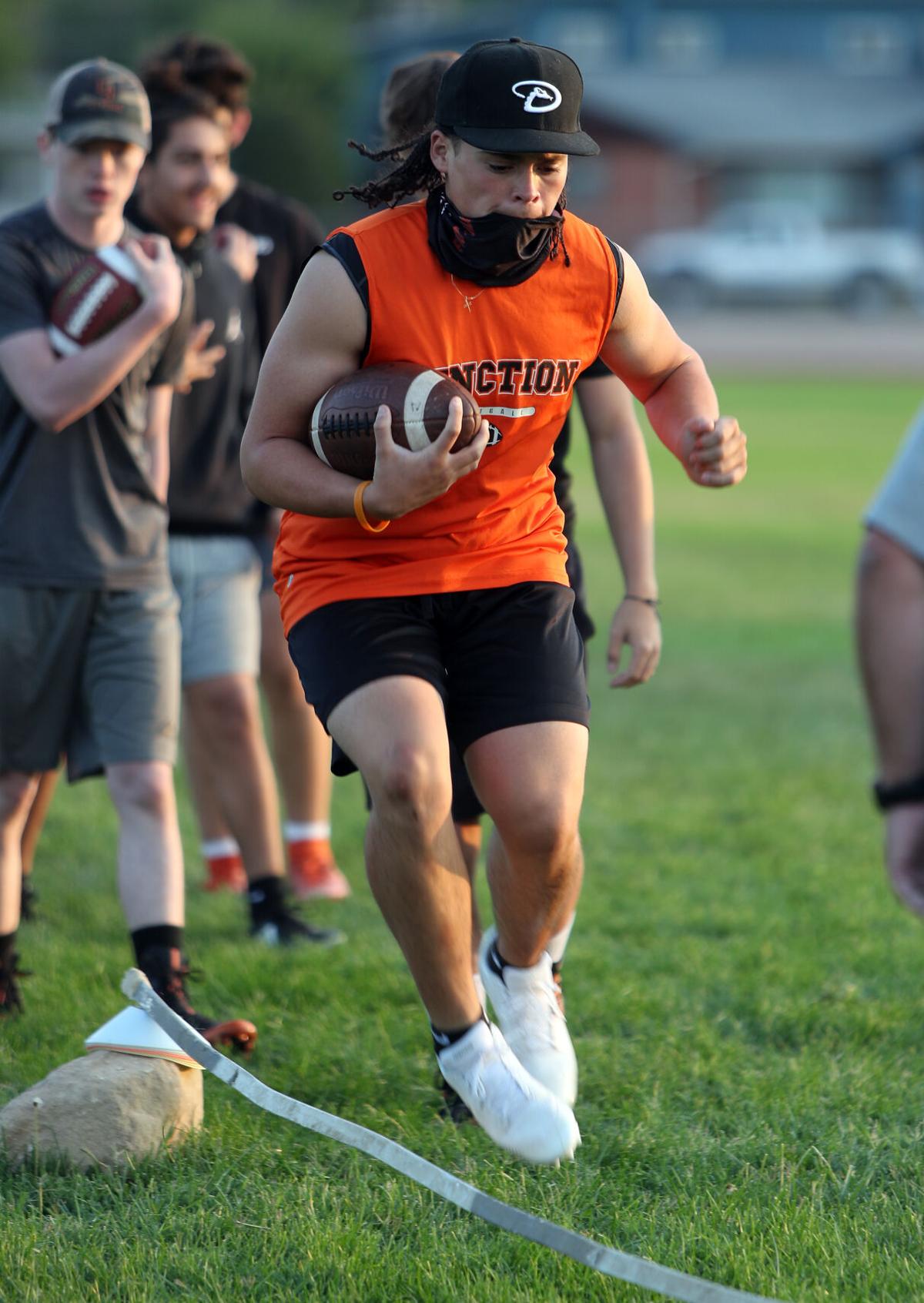 The Grand Junction High School football team working out at 6:00am at the school. Here Aiden Johnson RB/LB for the Tigers during a RB drill.

Linemen for the Grand Junction High School football team work on technique at a team workout in early August.

District 51 football players worked out all summer, hoping to get a jump-start on this fall's season. The season was then pushed to spring, but the past week has been a whirlwind on on-again, off-again speculation that Colorado could play again this fall.

The Grand Junction High School football team working out at 6:00am at the school. Here Aiden Johnson RB/LB for the Tigers during a RB drill.

Linemen for the Grand Junction High School football team work on technique at a team workout in early August.

Normally, this time of year, prep football players in Colorado would be well beyond summer workouts and conditioning, finally gearing up in pads and hitting each other in preparation for hitting others.

During Grand Junction High School summer drills for its football players on Wednesday morning, it wasn’t to work on any plays or tackling technique or game-planning for the season opener. Instead, it was to inform the team collectively that the offseason would be twice as long this year.

“We kind of took care of it at the beginning during screening,” said Grand Junction interim head coach Ed Johnson. “The kids were a little disappointed and upset, but we realize we can’t control what we can’t control. We’re just going to build on what we’ve been doing. We’ve been going for 10 weeks now. We’re going to finish up our 10 weeks and build on that and take it how it comes in the offseason.”

Undoubtedly, football coaches around the valley and the state had similar conversations with their players. As did volleyball and boys soccer coaches since those sports were also shifted from fall to late winter start dates.

The Colorado High School Activities Association had announced the previous day that football, volleyball and boys soccer would be delayed until the beginning of March, creating a barren fall sports slate and a potentially chaotic second semester of the 2020-2021 school year.

Coaches around the Grand Valley are still discussing their options for how to approach the first-ever autumn offseason. Beyond the changed dates as well as the smaller playoff fields (eight for each classification instead of 16), coaches are still largely unsure of how the 2021 spring football season will look or how to prepare for it.

An even bigger hurdle, however, is faced by multi-sport athletes who suddenly find their athletic calendar more crunched than ever.

Israel Lane, a senior on Grand Junction’s baseball and football teams, is already having to puzzle over how to approach the winter and spring semester.

“It’s going to be different,” Lane said. “My main focus is probably going to be football. I think baseball’s right after. It overlaps right there. I might have to make a decision to only do one. If I did that, it would be football.”

Sports such as wrestling, girls swimming and boys and girls basketball begin in January. The wrestling state championships will conclude by March 6. The only problem is that football practices begin Feb. 22, with games starting March 4.

Overlap could also exist between Seasons C and D of CHSAA’s quadrant plan. Football season will be over by May 8, but baseball, track and field, boys and girls lacrosse, girls tennis, girls golf and boys swimming begin April 26.

On top of the overlap, physicality could be more of a concern than ever.

“Wrestling is a more injury-prone sport,” said Palisade senior Lodan Head, who both wrestles and plays football for the Bulldogs. “You can see it with multiple-sport athletes like that. They could do one sport over the other. I personally prefer wrestling over football. But, say if somebody prefers football over wrestling and they get injured wrestling, how will that set them up for the football season? The big-time football players who also wrestle, will they be more conscious inside of the wrestling season? If they feel hurt or anything minor, do you think they’ll sit out?

“I’m not sure how it’s going to go yet, but it’s something that could definitely be a factor in a lot of people’s careers.”

Palisade’s Kendyl MacAskill is a three-sport athlete. She’ll spend the entire second semester of the school year competing with basketball in the winter, volleyball in Season C and track and field in Season D. However, as busy as her second semester will be, her first fall without any sports will be even stranger.

“Most of my team and I are used to having sports all year round, so although the seasons will be different through the second semester, I feel like this first semester is going to be the weirdest part of it all for us because we won’t have anything.”

Although physically straining young athletes inside of an unprecedentedly strange sports calendar is a concern for coaches, they’re still encouraging their athletes to seek other sports, especially with their fall options mostly gone.

At Grand Junction, Johnson’s son, Aiden, is both a football and basketball player for the Tigers.

“One of the things I told them when we started here was, ‘If you have another sport that you want to go out for, I definitely encourage you to go out for it,’ ”coach Johnson said. “There will be a little bit of overlap in a couple of the sports, but I don’t think it’s going to cause that many problems. For instance, my son will go out for basketball, and basketball will run right into football. We have a couple of guys who will be wrestling. I definitely encourage them to stay competitive, stay active, stay working out, stay in some kind of sport.”

At Palisade, head football coach Joe Ramunno has a history of advising his players to take up wrestling. Ramunno’s father, Carl, was a six-time state champion coach at Steamboat Springs and was inducted into the National Wrestling Hall of Fame, so it’s no surprise that wrestling has always had his eye.

“We’ll look at that area when it gets to it, but I’ll encourage those kids to participate in everything they can,” Ramunno said. “Basketball and wrestling will both be on the tail end at the start of football season, but that’s one of those things you have to deal with. When the time comes, we’ll see where we’re at, but the wrestling state tournament is right there at the start of football, so who knows? I’ll encourage those kids to do everything.

“You’ve got to look at the positive side of it: it will get those kids in great shape.”

By next week, the four fall sports approved for “Season A” — boys golf, boys tennis, cross country and softball — will all be practicing and starting competition.