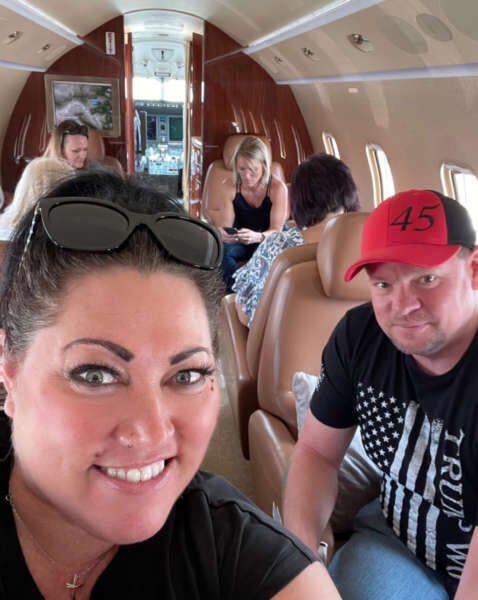 This picture briefly appeared on the Facebook page of Jacqueline Anderson, vice chairwoman of the Mesa County Republican Party. She, along with her husband, Cory, wearing red hat, Garfield County resident Sherronna Bishop, in the far back on the right, and Mesa County Clerk Tina Peters are on a private plane heading to Mike Lindell’s conspiracy theory event on Aug. 9. Lindell later admitted to paying for that flight from Grand Junction to Sioux Falls, South Dakota.

This picture briefly appeared on the Facebook page of Jacqueline Anderson, vice chairwoman of the Mesa County Republican Party. She, along with her husband, Cory, wearing red hat, Garfield County resident Sherronna Bishop, in the far back on the right, and Mesa County Clerk Tina Peters are on a private plane heading to Mike Lindell’s conspiracy theory event on Aug. 9. Lindell later admitted to paying for that flight from Grand Junction to Sioux Falls, South Dakota.

A Colorado group that claims to have evidence the state’s election systems are faulty, but still hasn’t provided anything to back that up, is attacking the Mesa County Board of Commissioners for holding a public meeting on the topic.

It is only one of several unfounded claims being made by the partly anonymous Colorado-based U.S. Election Integrity Plan.

Mesa County Clerk Tina Peters, however, turned over an unsigned report to commissioners Friday that she claims shows evidence of problems with the system. The report purports to show the before and after images of computer files of her election equipment hard drives, but it is unclear what files were missing, what they were replaced with or whether they had anything to do with how the election software is supposed to work.

The 83-page report cites no authors or their area of expertise, nor does it indicate what group or organization wrote it.

Earlier this month, the board of commissioners agreed to meet with Garfield County resident Sherronna Bishop and members of the group, including its main local organizer, Cory Anderson, under the pretext that evidence would be presented to show how the county’s Dominion Voting System tabulation machines couldn’t be trusted, and why the county should get out of a newly signed contract with that Denver-based company.

No evidence was presented by either Bishop, Anderson or others in the group, which describes itself as a grassroots organization that believes there was fraud in the 2020 general election.

In a hand-delivered press release sent to media outlets, the group said it and Bishop thought the Sept. 2 meeting it had with commissioners would be a private one not open to the public.

“The meeting was expected to be private among voting local officials and stakeholders from Mesa County,” the group said in its release. “In a shocking twist, the meeting was open and attended by a large cadre of people who have chronically dismissed citizen’s concerns and expert testimony on election integrity.”

Under Colorado law, whenever two or more elected officials who serve on the same panel hold a meeting, it not only must be open to the public, but noticed at least 24 hours in advance to allow anyone to attend.

In text messages days before that meeting between Mesa County Commissioner Cody Davis, Bishop, Anderson and another county resident who is a member of the group, Karen Seibold, Davis explained that law and made it clear it had to be open to the public as a result.

Bishop acknowledged that in the text messages, and offered no complaint.

Later, however, Bishop and the group accused commissioners of leaking information about the meeting to “anti-election integrity media, bureaucrats and law enforcement,” claiming that Commissioner Janet Rowland had become “hysterical” and “outed her own arrogance and disinterest in the concerns of the people she represents.”

Williams has been named the county’s designated election official while Rubinstein and state and federal law enforcement conduct a criminal investigation into possible violations of election security protocols by Peters and others on her staff.

Rubinstein’s office also has filed felony and misdemeanor charges against Peters’ deputy, Belinda Knisely, in connection with multiple harassment complaints filed by members of the clerk’s office, which related to those investigations. Knisley has been placed on paid administrative leave and told not to come into the clerk’s office.

Peters, who returned to Mesa County on Friday more than a month after attending an out-of-state voter-fraud conspiracy theory event, also continues to claim that something is wrong with the state’s election, but also offers no evidence.

The group and Bishop, a one-time campaign manager for now U.S. Rep. Lauren Boebert, R-Silt, have been ardent defenders of Peters, saying the clerk did her job by following guidelines in making copies of election computer hard drives before a routine “trusted build” update of computer software last May.

The group claims the county’s clerks were advised to do that, but that’s not actually what they were told. According to an advanced notice of those updates from Dominion, which the group itself cites, the clerks actually were told to make backup copies of the results of previous elections, not entire hard drives or computer software programming files. That’s something county election officials are required to do for no less than 25 months after an election.

It is unknown if Peters made backup copies of past election results as was required.

The criminal investigations into Peters and others in her office center on someone making copies of secure passwords and hard drives, and making them available to conspiracy theorists, who later posted them online.

The hard drives were first revealed publicly at a voter-fraud conspiracy theory event in South Dakota, one that had Bishop acting as a moderator for Peters’ appearance alongside Mike Lindell, the MyPillow CEO who believes the 2020 election was stolen from former President Donald Trump. The two even flew to the event together, along with a small cadre of other members of the group, including the vice chairwoman of the Mesa County Republican Party, Jacqueline Anderson, the wife of Cory Anderson.

Images of those hard drives were the focus of the anonymously written report that Peters gave to commissioners on Friday, which attempt to show that some files where deleted or replaced with other files.

The report, however, doesn’t make it clear what those files were intended to do, and whether they were supposed to be replaced with new files as part of an upgrade of the computer software.

A copy of the report, titled “Forensic Examination and Analysis,” was obtained by The Daily Sentinel late Friday. As a result, the Secretary of State’s Office couldn’t immediately comment on it to dispute or confirm the veracity of its alleged findings.

Peters, however, said the report proves she’s been right all along.

“From my review of the executive summary, it does appear that my concerns were more than justified,” Peters said in a letter to commissioners. “As you know, the legal duty to preserve election records falls solely to me and my office. ‘Extensive’ amounts of data required to be preserved were instead destroyed, and done in a way that was totally beyond my control or knowledge.”

Part of the criminal investigation is focused on whether Peters or someone in her office made those hard drive copies late at night on a Sunday, and that surveillance cameras were turned off during that time. Those cameras are required to be on 24 hours a day, seven days a week, 365 days a year.

The group also claims that the voting equipment have built-in modems and can be accessed remotely, something else that isn’t true, Williams and other election officials have repeatedly said.

For the past several months, members of the group have been going door-to-door asking voters if they believe their ballots were counted in the 2020 election, saying they have evidence that some were not.

But despite promises to turn over that so-called proof to county elections officials, they have not done so, those officials say.

Davis and Rowland have been working with some members of that group in an effort to address any concerns. They, too, have yet to receive promised information the group says it’s compiled from its door-to-door canvassing in an attempt to gather evidence that some ballots were never counted.

After an angry email that Rowland received from a voter who was told by the group during one canvassing event that her ballot had not been counted, Rowland looked a little deeper.

“In the middle of her email, she mentioned that both she and her husband had voted in 2020, but when the canvassers came around this summer, their records showed she hadn’t voted,” Rowland said in an email.

“So I checked with our elections staff, and she said their records showed that the woman and her husband did vote in the presidential primary, the Colorado primary in June and the general election, and also in 2019, 2018 and 2017,” Rowland added. “So I believe whatever report they (the canvassers) are going off of is simply not accurate. I’m not even sure where they got it from.”

The Colorado Secretary of State’s Office reminds voters that the secrecy of their vote is constitutionally protected, and that anyone coming to their door asking questions about their voting history is not being done by local or state election officials, and any claims to the contrary are false.

“You have the right to request the name and credentials of door-to-door solicitors, as well as the organization they represent,” the office said in a statement. “If you feel harassed or threatened, please reach out to law enforcement or the Department of Justice at justice.gov.”

Last month, the group published a “County & Local Organizing Playbook” that it is offering to others in Colorado and nationwide in an effort to expand its numbers.

While the group claims to be nonpartisan, that playbook offers advice to help “patriots” trying to organize their own local chapters on how to vet volunteers to ensure liberals or communists don’t infiltrate their ranks.

“The objective is to build your county coalition and grow your team,” the playbook reads. “You see, communists are very good at marching in the same direction because their meals depend on it. With ActBlue, if you fall in line, you get a cut. Social media is useful for recruiting as long as you have additional controls in place to validate that you are not inadvertently admitting Antifa and ActBlue into your core group.”

The playbook also calls on members to appear at public meetings on a routine basis and continually speak out on election integrity issues, something that has become a weekly occurrence at county commission, Grand Junction City Council and School District 51 School Board meetings for months now.