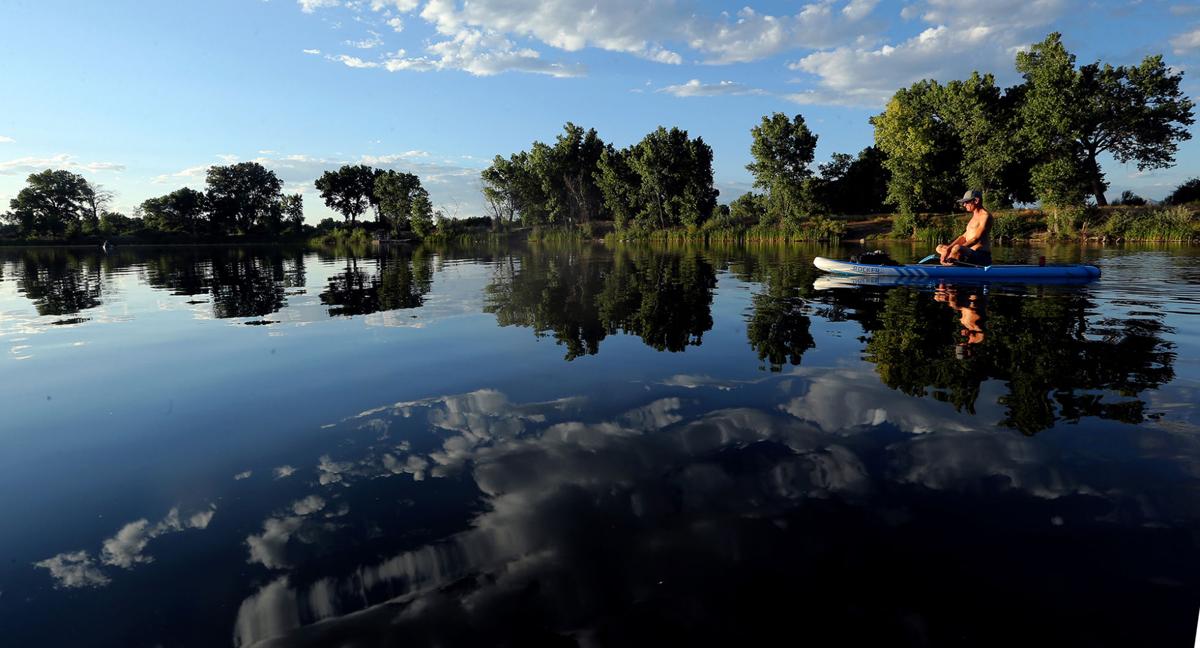 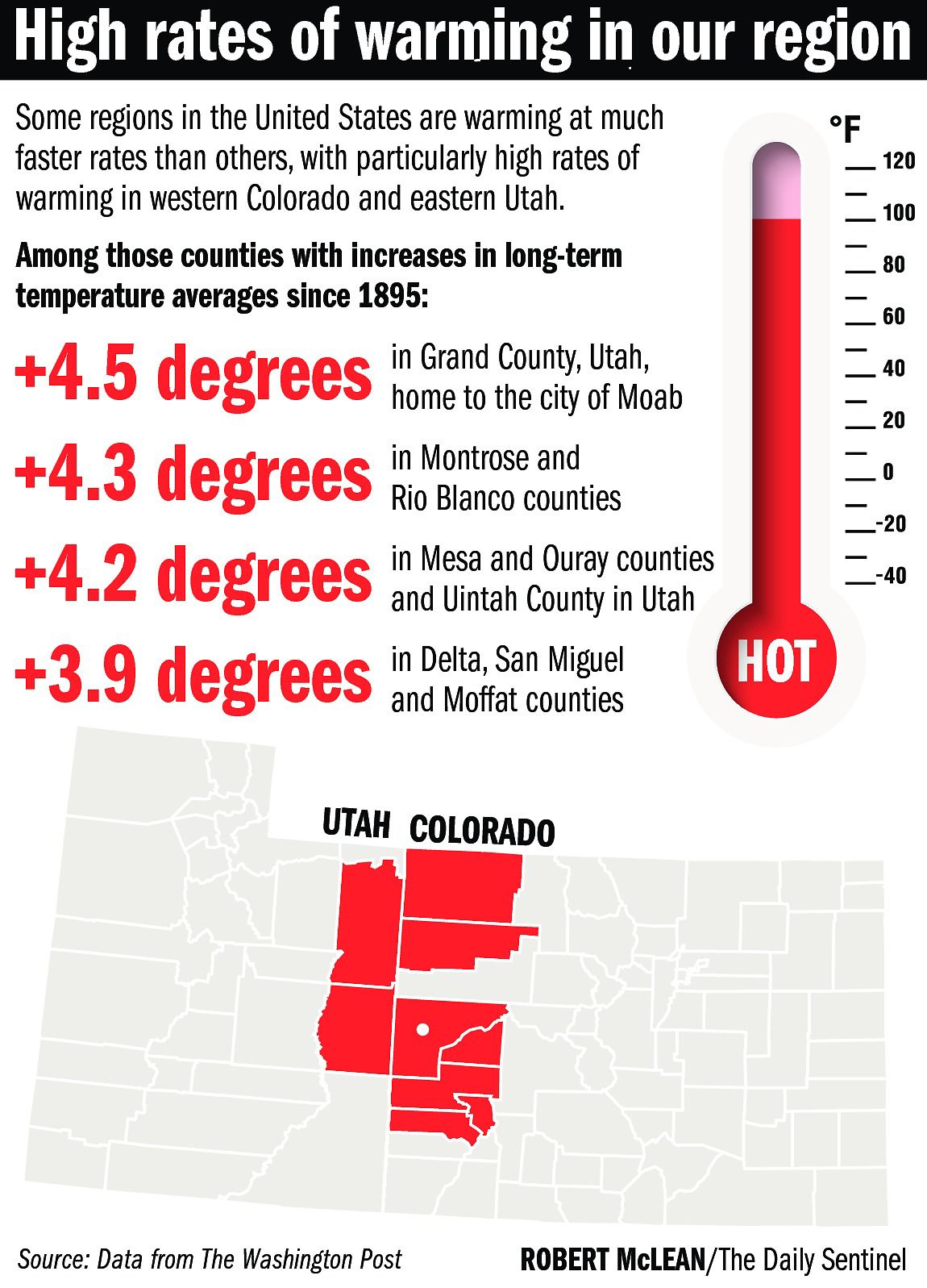 As a longtime summer researcher at the Rocky Mountain Biological Laboratory in the Gothic area outside Crested Butte in Gunnison County, David Inouye has watched the high-elevation study sites there change due to a warming climate.

Now also living between Paonia and Hotchkiss after retiring from the University of Maryland, Inouye was struck by a Washington Post report showing Delta County and other areas of western Colorado have warmed even faster than Gunnison County since the late 1800s. In fact, the temperature increases are some of the biggest in the country.

Last week's story by the Washington Post and accompanying county-by-county data it compiled showing temperature trends since 1895 focused on the fact that climate change has been uneven across the United States, with some regions warming faster than others. The report included a national map, and among the notable red spots indicating particularly high rates of warming is western Colorado and eastern Utah.

Inouye said the report appears to be "a heads-up that this part of Colorado is definitely experiencing unusual warming. And even though Gothic, Colorado, up at 9,500 feet isn't experiencing that yet, certainly … the adjacent counties are already seeing a tremendous amount of warming."

The Post story focuses on the benchmark number of 2 degrees Celsius, or 3.6 degrees Fahrenheit, because of the consensus among international leaders in the 2015 Paris climate accord that urgent action needs to be taken to keep temperature increases well below that level by the year 2100 to avoid catastrophic changes. But the story says 71 counties in the country already have reached that mark in terms of growth in average temperatures.

Among those counties, the paper reports increases in long-term temperature averages since 1895 of:

■ 4.5 degrees (Fahrenheit) in Grand County, Utah, home to the city of Moab;

■ 4.2 degrees in Mesa and Ouray counties in Colorado and Uintah County in Utah;

Gunnison County's average temperature increased 2.7 degrees over that time, the Post reported. The area around the Gothic-area research has shown signs of warming, such as a longer growing season that is affecting plants and animals alike, Inouye said. As an example, he said research has shown that the major cause of mortality in marmots there used to be starvation due failing to accumulate enough fat ahead of long winter hibernations. Now longer growing seasons let them put on more fat, and the major cause of marmot deaths is predation by foxes, which didn't used to live at that elevation but moved up over time, Inouye said.

He said climate change also is anecdotally affecting people's pocketbooks in the North Fork Valley. Early springs in some years are resulting in apricot trees flowering too soon, only to suffer frost damage later, killing off crops, he said. He said longtime residents have told him winters used to be longer and such "false springs" rarely used to occur.

The Post reported that its data is based on federal weather databases, peer-reviewed scientific studies and reports by local climatologists. In Colorado, a 2014 report released by the Western Water Assessment at the University of Colorado at Boulder and the Colorado Water Conservation Board showed Colorado's climate had warmed by about 2 degrees over the prior three decades. It said various models suggesting continued warming of 2.5 to 6.5 degrees by 2050, with the warming possibly resulting in decreasing streamflows even with a possible increase in mid-winter snow.

State Climatologist Russ Schumacher, with the Colorado Climate Center at Colorado State University, said his office contributed to the 2014 report, before he began working there.

He said his office probably could quibble with some of the Post's localized data. While there's a good set of long-term, reliable weather stations around the state, not every town or even county had stations going back to 1885, he said. But he thinks that broadly speaking the Post data lines up closely with the data already on hand in Colorado.

He said one discrepancy between the Post data and the 2014 Colorado study involves Grand Junction. The 2014 report didn't show a particularly strong warming trend for the city, he said.

"But then it pops up as a hot spot in (the Post) analysis. We're going to try to figure out why they're inconsistent and what's going on," he said of the two data sets.

In 2016, Joe Ramey, then a forecaster with the National Weather Service in Grand Junction, reported having analyzed records from 11 western Colorado and eastern Utah weather sites dating back to at least 1911, and finding that average minimum daily temperatures per decade showed a notable increase, even as average maximum daily temperatures hadn't changed much. Much of the increase occurred since the 1970s, rising from 28.7 degrees then to 31.8 degrees for the half-decade of 2011-15.

Schumacher said the fact that the parts of the southeastern United States and Gulf Coast are warming at a slower speed than other parts of the country and in some cases even cooling a bit, while the interior of the continent is warming fast, isn't all that surprising. But he said there's no real simple explanation for why eastern Utah and western Colorado may be an especially hot spot for warming. He said factors such as topography and local land use can enter into the equation.

"Kind of picking that apart is never easy for a local area," he said.

Schumacher said the slower warming pattern in eastern Colorado appears to have been mitigated by increased irrigation there that tends to keep daytime temperatures lower, so the region has never seen a repeat of the high temperatures of the Dust Bowl years of the 1930s.

Schumacher said Colorado has generally seen very warm years since the 2014 report was issued, and the Post story has helped motivate him to want to update that report soon to incorporate the continued warming.

Schumacher's office currently is working to check the accuracy of a recent 115-degree temperature reading near Lamar that, if certified, would be a new record high for the state.

Colorado Mesa University professor Deborah Kennard is a plant ecologist and teaches a class in climate change adaptation, focused on trying to figure out ways to manage natural areas to adjust for a changing climate. She said there are online tools available to take large-scale climate-change predictions and try to modify them to determine what may happen locally.

"Obviously there's going to be uncertainties surrounding making predictions like that," she said.

She thinks the Post report is important in that it doesn't involve future uncertainties but rather data about warming that already has occurred.

"They're showing what already happened," she said.

While she feels that the Grand Junction area has gotten warmer during the more than a decade that she has lived here, and believes that forest health issues such as beetle infestations also reflect climate change, she said it's best to rely on actual data. She said the Post data provides "another line of evidence that climate change is occurring absolutely," but not at the same rate everywhere in the country.

Carlyle Currier, a Molina rancher also involved in state water policy as a member of Colorado's Interbasin Compact Committee, said the climate trend he's noticed has been more variability in the weather, with pretty cold days as well as warm ones, and extreme variance between droughts and wet periods.

"The main thing is we've got to be prepared for whatever comes our way. We can't be assured that it's going to be like it has been in the past," he said.