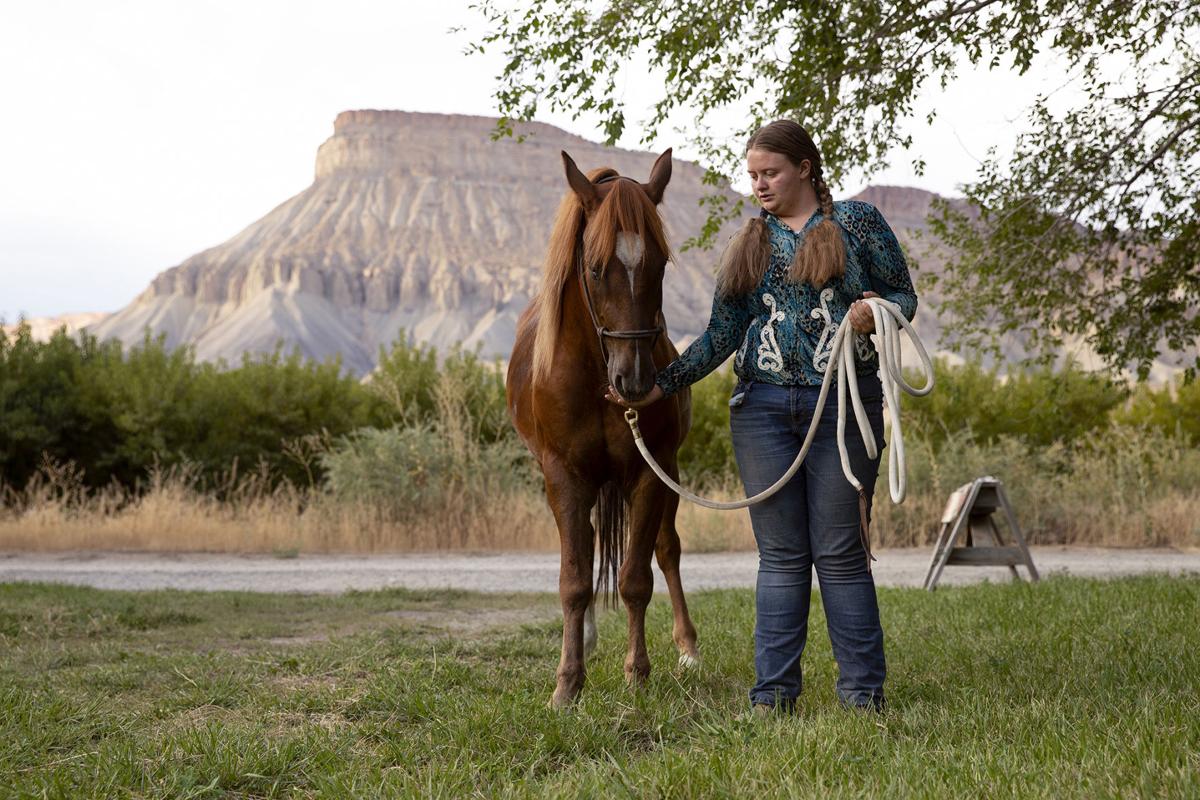 Paige Burnham feeds Nitus a treat during a training session at her family’s property on Sept. 03 in Clifton. 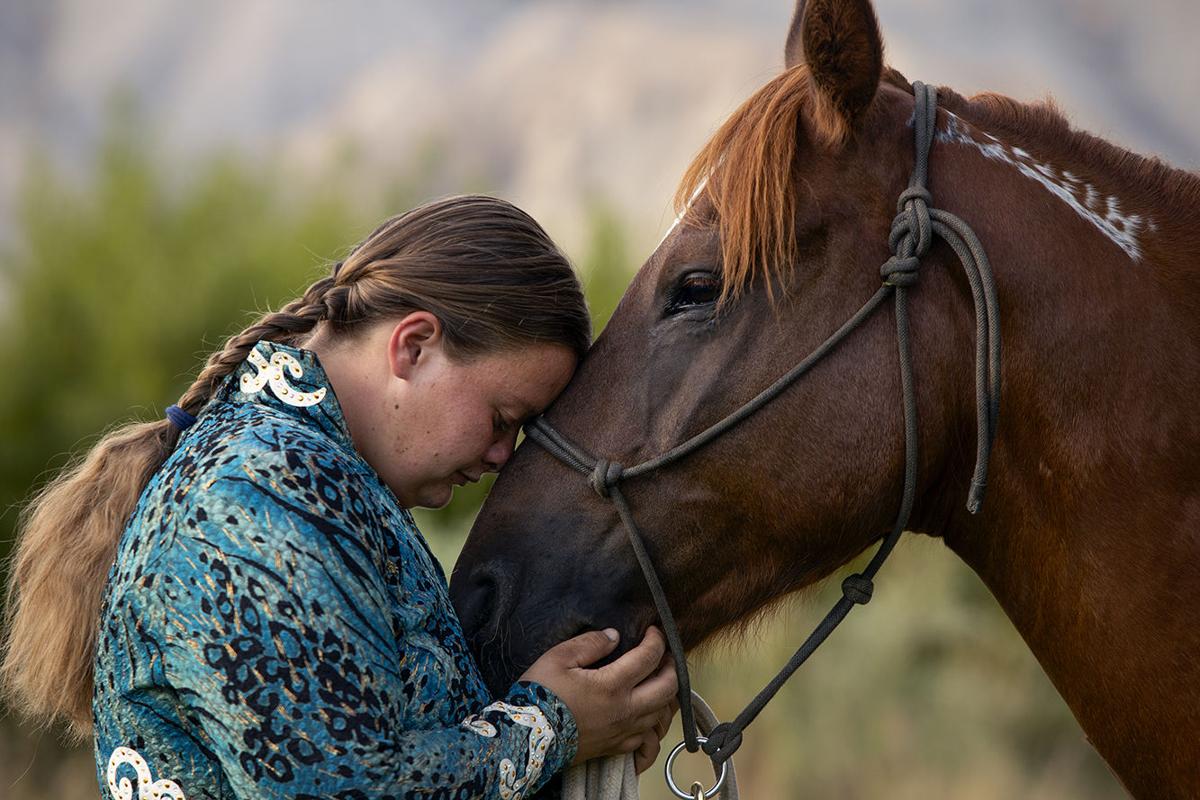 Paige Burnham shares a tender moment with Nitus, a wild mustang she trained in 100 days for the Meeker Mustang Makeover on Sept. 3. 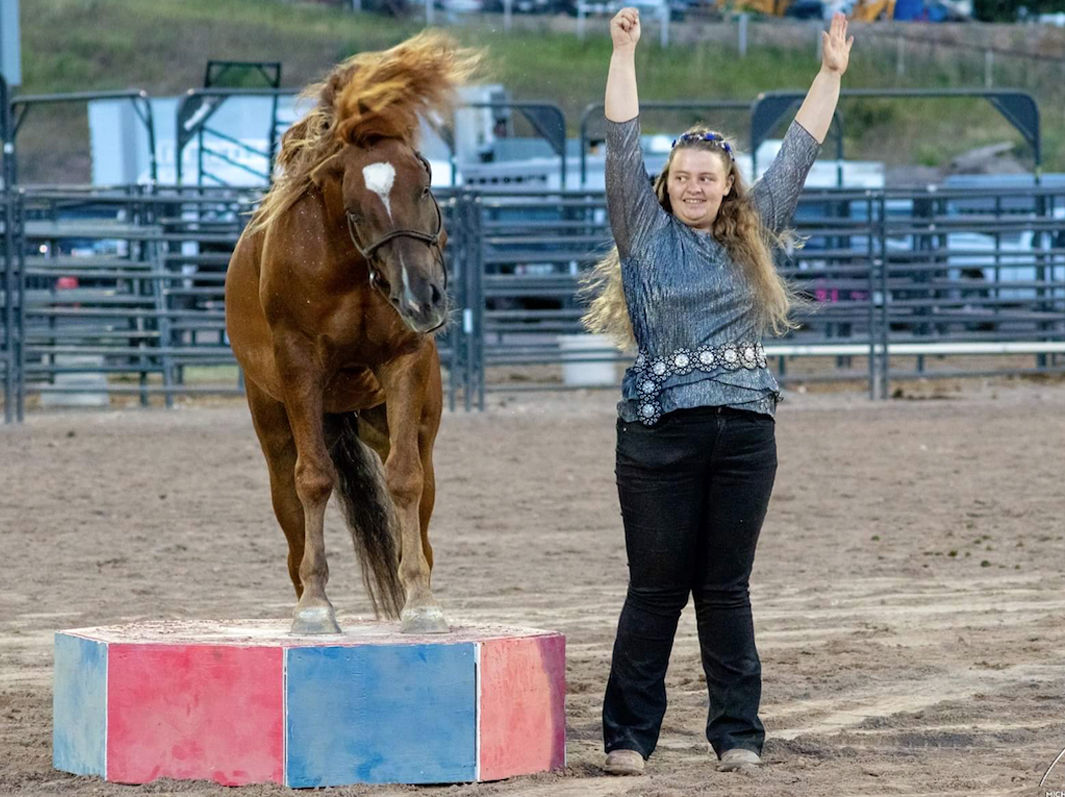 Paige Burnham feeds Nitus a treat during a training session at her family’s property on Sept. 03 in Clifton.

Paige Burnham shares a tender moment with Nitus, a wild mustang she trained in 100 days for the Meeker Mustang Makeover on Sept. 3.

In reality, the young mustang has spent most of his life without a name, and without human contact, but now that's what he's called — it roughly translates to "friend."

His first friend was Paige Burnham, herself quite young at 21, but already a horsewoman of some accomplishment. Burnham earlier this year took Nitis home to her family's ranch in rural Clifton after he was rounded up by the Bureau of Land Management from the Piceance-East Douglas Herd southwest of Meeker.

Burnham and Nitis were paired as part of the inaugural Meeker Mustang Makeover, a competition among six trainers with 100 days to turn wild mustangs into docile beasts, culminating in a performance before the large crowd assembled for the town's namesake sheepdog festival.

A hundred days seems flash-photo quick to train the wild imprint from a mustang accustomed to untamed freedom and cutthroat survival. But observing Burnham and Nitis over their compressed journey proves remarkably insightful as to the bond that's possible between human and horse in just a handful of weeks.

It's a bond that was palpably clear just a few days after Burnham brought Nitis home June 1.

"He's still pretty new to all the people," Burnham notices, and he's also getting used to all the animals nearby. Like the llama next door, the likes of which Nitis has probably never seen before.

Burnham clicks, and Nitis — wary but already attentive — follows along rather fluidly in a circle. She spins a rope in one of her hands, and Nitis quickly gains a trot.

This is four days in, and Burnham's grandmother says Nitis has already changed a lot in those few days. Before, he wouldn't let Burnham get near him on one side. Now, though still unsure, he lets her approach from either side, whether for a gentle touch or an affectionate scratch.

"He's starting to like me," Burnham says, before halting. "'Cause I know I'm not going to be able to keep him — they sell him at the end of this.

"I've tried to get him around as many people as I can — to where he kind of bonds with me, but not just me," she says. "So that he can be successful in his new home."

There's a wistful tinge in her voice, even though she and Nitis have been paired for just a few days.

A couple weeks later, Burnham explains the inherent dichotomy in the competition challenge — to win Nitis' trust, she has to build a bridge to him, but at the end of the challenge he'll be sold.

"You have to kind of get close because that's how you bond with them," she explains, a bit clinically.

"That's why I'm trying to take him places, and I have my mom, and my sister and my grandma help me, so that he learns that there's more than just me in his life."

By then, Burnham had hauled Nitis in the trailer a few times, and taken him to the fairgrounds for 4H practices. "He's super sweet around other horses," she says, and already really likes treats, and praise.

Nitis' evolving genial demeanor is evident a week later at the fairgrounds, as Burnham leads him from a trailer and around a scattering of people, including a curious tiny child.

Nitis lets Burnham comfortably lead him, lifts his hoof on command, nudges his best friend for a treat in her pocket, and doesn't flinch when the tot reaches out to stroke his cheek. Nitis genuinely seems as curious about the miniature human as the boy does looking up at the sizable beast.

Nitis has been captive for just more than a month at this point, and if you didn't notice the deep but healing scars criss-crossing his shins, you might not know that he was so recently plucked from the wild.

Maybe it's because Nitis is a bit of a blank slate that he's become so trusting so fast. And maybe Burnham's past experience working closely with other horses — including a traumatized Andalusian mare and another wild mustang — groomed her for this moment with Nitis.

Burnham was just 16 when she bought the Andalusian — named Chula — who was barely halter broke when she got her. Burnham's dad, a veterinarian, thought she was "crazy" to buy her, but she did, and she trained Chula with kid gloves and patience, eventually winning the horse's trust.

"She taught me a lot about training horses, and she still is," Burnham said.

Energy is the baseline for any human-horse relationship, she says she learned.

"She'd like for you to have complete control of your emotions and your body before you do anything with her," she says about Chula.

All she learned she applied to the training of another wild mustang, Zyana, who she adopted from the Little Book Cliffs herd in November last year. Her success with Zyana — she won high point in hand at Colorado Mustang Days earlier this year — prepped her for the Meeker challenge.

"They start turning to you when they're scared, instead of seeing you as another scary thing," Burnham explains. "When something scares them, instead of reacting and running away from you, they come toward you."

That same patient energy is something Burnham uses in her life away from horses. She also helps train service dogs for veterans with PTSD and kids with special needs, and she'll graduate next year from Colorado Mesa with a major in early childhood education, specializing in helping those same special needs kids.

A few days before her and Nitis' 100 days is up, though, Burnham says she's excited and nervous about the upcoming competition performance in Meeker.

She knows he's been able to "keep the same brain" in a number of different venues, but she's nervous about the obstacles that each mustang must try to negotiate as part of the program.

In the end, Nitis stumbles over some of those obstacles during the Sept. 6 competition in Meeker, but no matter — Burnham beams with pride that the two of them had a successful freestyle routine and were able to work a cow into the middle of a circle.

She has zero cattle work experience, and some of the other competitors were professional cowboys.

"He did really good," she says. "There were a lot of people there, and he didn't even care."

While Nitis finished out of the top three, he perhaps won the night by being adopted to a sprawling ranch in Wyoming. Burnham said Nitis was adopted along with a mustang that she believes is his half-brother, to a ranch with more than 100 other horses.

It's a far cry from the ruthless existence out in the wild.

For six months out of the year, the herd at the Wyoming ranch is turned out to pasture "just to hang out and be horses," Burnham says.

"It sounds like they have a pretty good life up there."