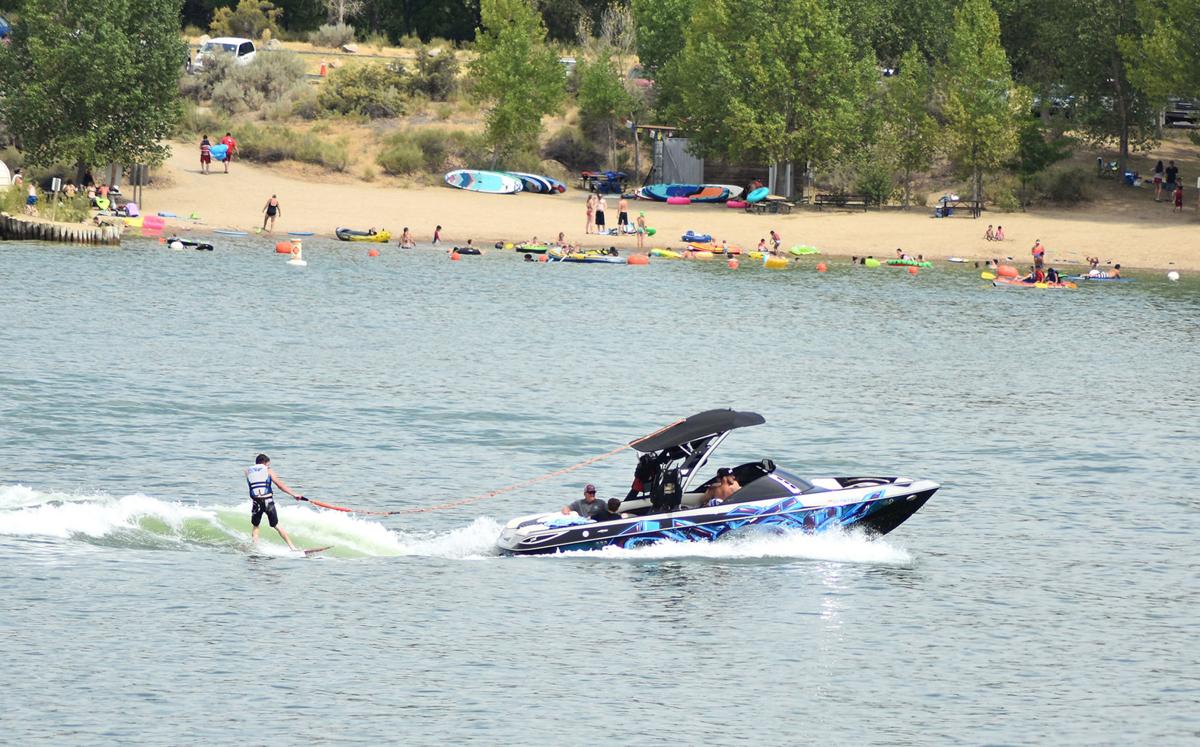 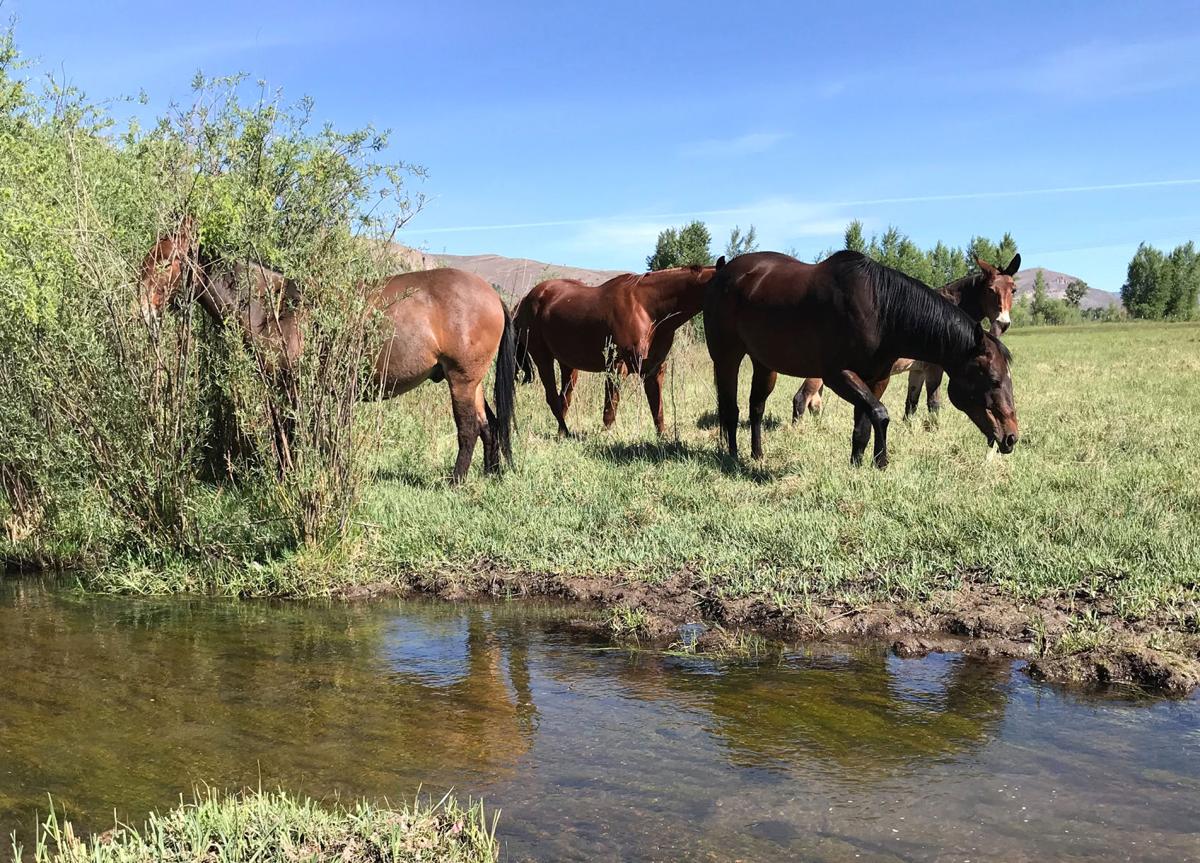 DAVE BUCHANAN/Special to The Daily Sentinel Horses grazing near an irrigation ditch in Gunnison County illustrate one fact of western water: It's estimated more than 80 percent of the water in the West goes to agriculture. Balancing the demands between traditional agriculture and increasing development looms large in future water decisions. 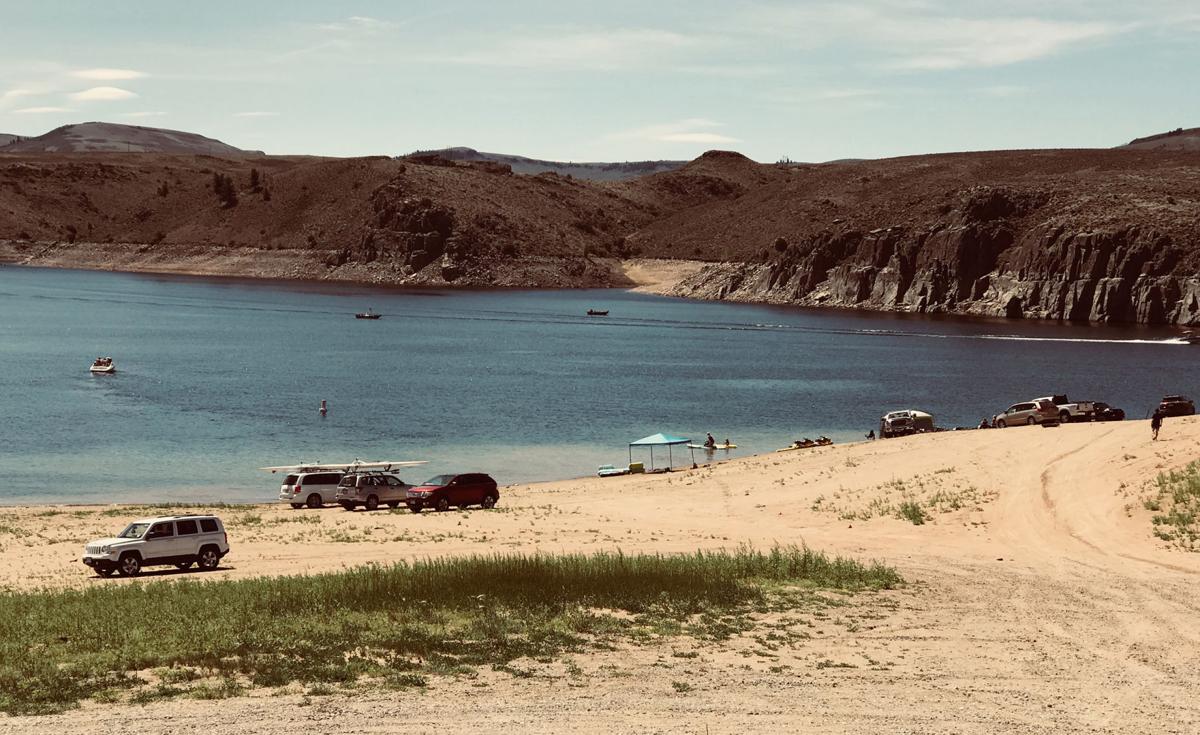 DAVE BUCHANAN/Special to The Daily Sentinel Even with a visibly shrinking pool, Blue Mesa Reservoir still draws a crowd and a variety of outdoor enthusiasts. Developing future decision-makers to manage water demands is part of the role of the Colorado Water Workshop at Western State Colorado University.

DAVE BUCHANAN/Special to The Daily Sentinel Horses grazing near an irrigation ditch in Gunnison County illustrate one fact of western water: It's estimated more than 80 percent of the water in the West goes to agriculture. Balancing the demands between traditional agriculture and increasing development looms large in future water decisions.

DAVE BUCHANAN/Special to The Daily Sentinel Even with a visibly shrinking pool, Blue Mesa Reservoir still draws a crowd and a variety of outdoor enthusiasts. Developing future decision-makers to manage water demands is part of the role of the Colorado Water Workshop at Western State Colorado University.

Has anyone recently used that on you?

It only takes a simple glance at the smoke billowing from the 416 Fire and the Burro Fire, combined more than 24,000 acres of blackened and desolate wild land, to acknowledge that, yes, it's hot enough for you.

No secret that the West, specifically the area drained by the Colorado River, is short of water, particularly if you: A) use water or B) see A.

It's nothing new, really. Climate researchers have seen this coming for years. The challenge, of course, is how we, as in all of us, share the burden of dealing with this new normal.

Which brings us to today's topic: How do we prepare tomorrow's decision-makers today, when we can't be sure what tomorrow is going to look like?

This is the trial facing the Colorado Water Workshop held annually at Western State Colorado University in Gunnison. This spring the workshop marked its 44th gathering by asking a select group of participants, most with long ties to the workshop, to look to the future and decide possible options for the workshop to follow.

Even though the WSCU gathering is older than most, if not all, of its competitors, there are plenty of the latter. At last estimate, 11 similar workshops are conducted around the state. And they all (but for one or two notable exceptions) are cookie-cutter reproductions of "water geeks talking to other water geeks," as one CWW participant said this year.

And why attend the WSCU conference if it doesn't provide something different?

Workshop director and WSCU environmental studies professor Jeff Sellen admitted this year that although the Colorado Water Workshop is a "different kind of workshop, we recognize the need for change."

He called it a "retooling" of the workshop aimed at increasing involvement of WSCU students and connecting them to established water leaders and those water managers (a very broad category) early in their careers.

It's an opportunity, Sellen said, to design a "future for western water that acknowledges new challenges."

This year's pared-down conference included in its invitation-only audience not only the well-experienced (including conference founder and longtime Gunnison water attorney Dick Bratton) as well as a half-dozen or more present-day WSCU students in Sellen's environmental studies program.

Spoiler alert: no dramatic decisions were announced or even hinted at, although many excellent options exist. That will come later, but like most memorable affairs, the majority of the excitement is in the discovery phase.

After that, it's just a lot of hard work.

The 30 or so participants seemed to agree that inviting "water geeks" (and you know who you are) to talk arcane language and hydrologic philosophy to similarly inclined devotees has its place and certainly provides opportunities for education, although perhaps only to like-minded adherents.

But does it reflect the best option for Western State and its role in the future of water education and management?

Education seems to be the key and that, said John Hausdoerffer, director of the school's Center for Environment and Sustainability, remains the provenance and function of Western State Colorado University.

"What is it we add to the conversation?" Hausdoerffer asked during a thoughtfully taxing presentation.

Focusing on the generations of students that will be needed to make effective decisions, Hausdoerffer urged the conference to explore at least 10 years ahead, developing the tools and skill sets needed to deal with climate change and similarly perplexing hurdles.

These include communicating with the public, dealing with rapid environmental and climatic changes, and most of all, continuing to learn and adapt.

"Who have we been educating and who do we want to educate?" posed George Sibley, author and former Colorado Water Workshop director and a well-respected voice in Colorado's water matters. Education, he said, necessarily involves breaking away from the old regimes and means involving new voices.

Some of those voices were heard from the handful of past and current WSCU students at the workshop, predominantly female and well-spoken on what they need to be successful in what is a mostly male-dominated field.

"Speak to all levels" of water knowledge and "push for education disciple," urged Sara Porterfield, former WSCU student and newly minted Ph.D (history). "The purpose of a discipline is to challenge assumptions."

And don't be afraid to "cross-pollinate" among academic disciplines with collaboration and the sharing of educational resources, said Hannah Holm, coordinator for the Ruth Powell Hutchins Water Center at the Colorado Mesa University.

"We don't want (to seek answers in) traditional continuity," added George Sibley. "What we've been doing won't work for the future."

"I'm excited for the future of the Western Water Conference," he said. "We just don't yet know what it is."