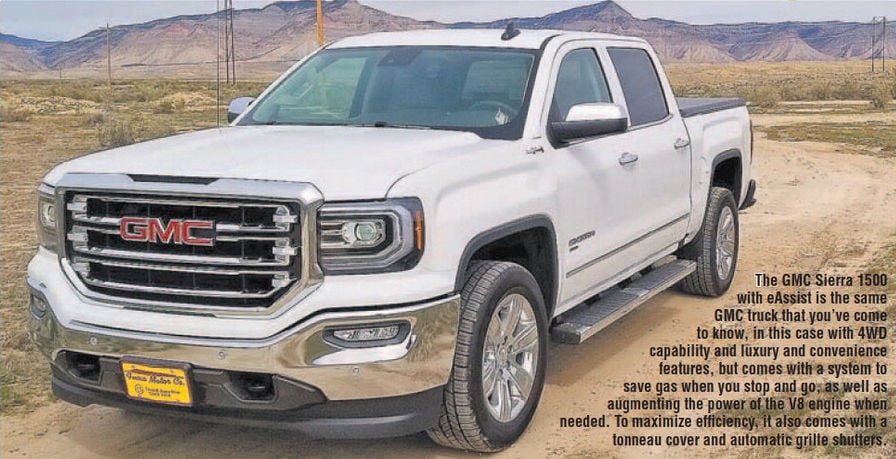 Here in Grand Junction we’re right in the middle of that magical time of year: spring cleanup. With garages and yards cleaned out and the discards piled on the streets, it’s convenient, but it doesn’t feel completely ‘green.’ Remember, though, in the three “R”s: reduce, reuse, recycle. Even without the first and third, there’s still ‘reuse,’ and there are folks that salvage usable items and repurpose them.

I thought of this as I pulled up behind one of the cleanup crews that were hard at work on the piles in the street. That, while it’s not a solution for all of the environment and efficiency conditions of a pickup truck, the GMC Sierra 1500 with eAssist its into that ‘reuse’ category.

While it’s not a true hybrid (most reviews I read called it a ‘soft’ hybrid), the eAssist truck has an electric motor and hefty battery, along with regenerative brakes. Primarily, it works by shutting down the engine while stopped, powering accessories (like AC, headlights and the Bose audio system) with said battery and then starting the engine instantaneously by the time you lift your foot and put it on the gas pedal. Then, when you’re slowing by braking or just letting the truck slow naturally, the system uses some of the energy that’s normally lost as heat to put power back into the battery (the ‘reuse’ in question). Normally, we throw that energy away through the natural cooling of the brakes, but now it powers the radio and accessories, or even the truck.

This kind of tech has been around in cars for a while (and in GM trucks like the Sierra in California for a few years).

What makes it different is that it’s a much more powerful system. The EPA ratings of the eAssist Sierra are about the same (and actual results would vary upon driving conditions), but the system has other benefits.

It can, for example, provide up to 13 additional horsepower and 44 pound-feet of torque for trailering or accelerating.

The result in terms of experience seemed to be a smooth, assertive drive in town and the highway.

The interior is comfortably furnished with plenty of technology in the infotainment system and seats. The wireless charging pad was big enough and placed well enough to charge my enormous Android phone in its case (which has only happened in a few other vehicles).

The battery is placed under the center console, so it eats a bit of storage up, particularly in the area under the arm rest/cover (no hanging files here). The vehicle comes with other enhancements for maximizing efficiency: a tonneau cover for the bed and automatic grille shutters that close at speeds higher than 30 mph.

That said, it has plenty of comforts and controls, as well as fold-up rear seats that provide additional cargo space, all in the upscale interior that defines the GMC experience.

Another benefit is that the system doesn’t add as much to the cost like a hybrid powertrain usually does.

While the technology may not provide huge boosts in terms of numbers, it does provide power and will be the first step in some interesting changes down the road. For now, it’s definitely worth checking out at Fuoco GMC on First Street.

And if the idea of reusing something that would normally be discarded appeals to you, make sure to get your GMC Sierra 1500 with eAssist for hauling before the cleanup crews start south of North Avenue this next week!