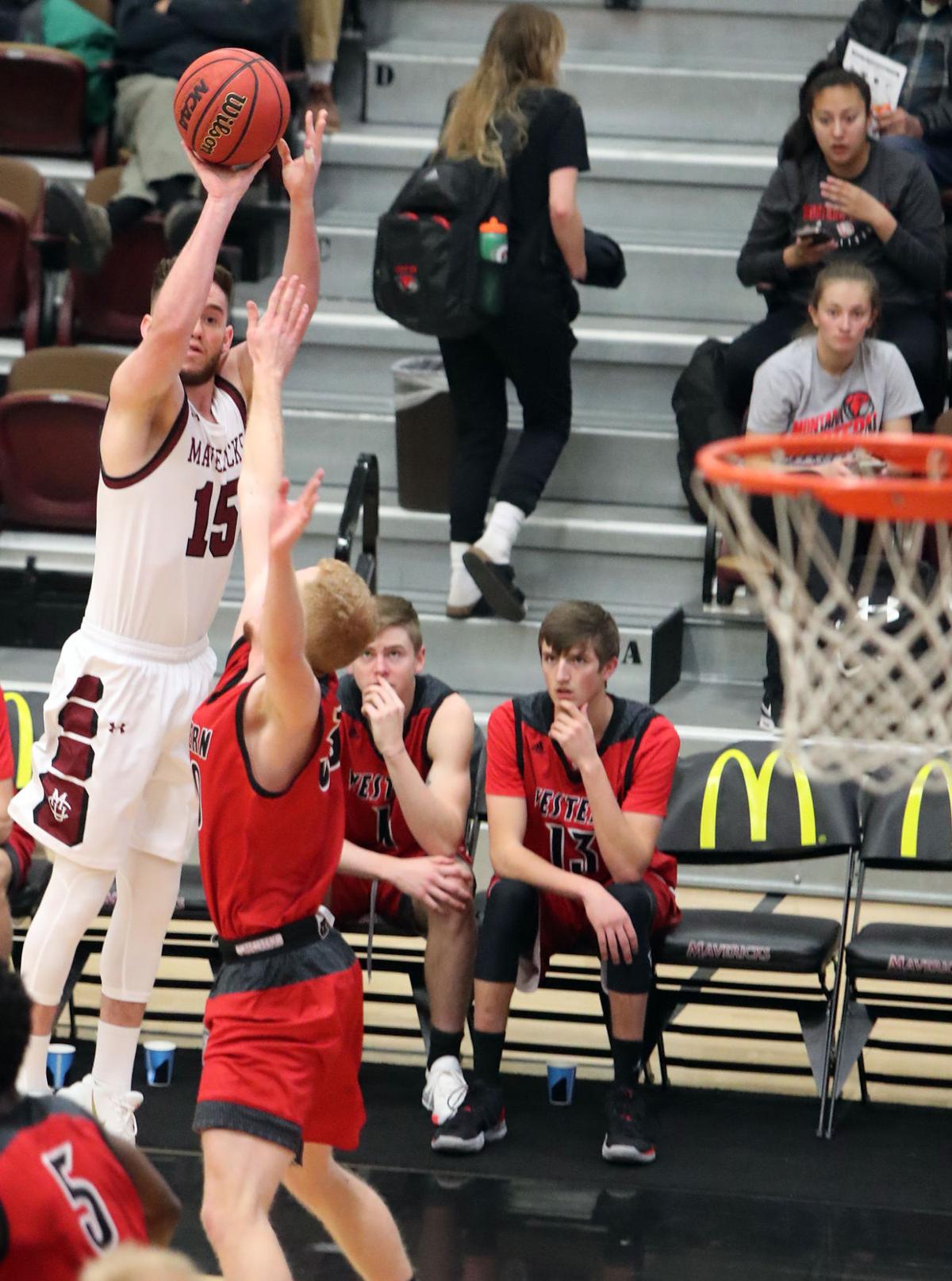 Colorado Mesa’s Kolton Peterson, 15, is No. 3 in the nation in 3-point shooting, making 52.6% of his attempts — including making at least one 3 in every game this season. The Mavs return from the break beginning today. 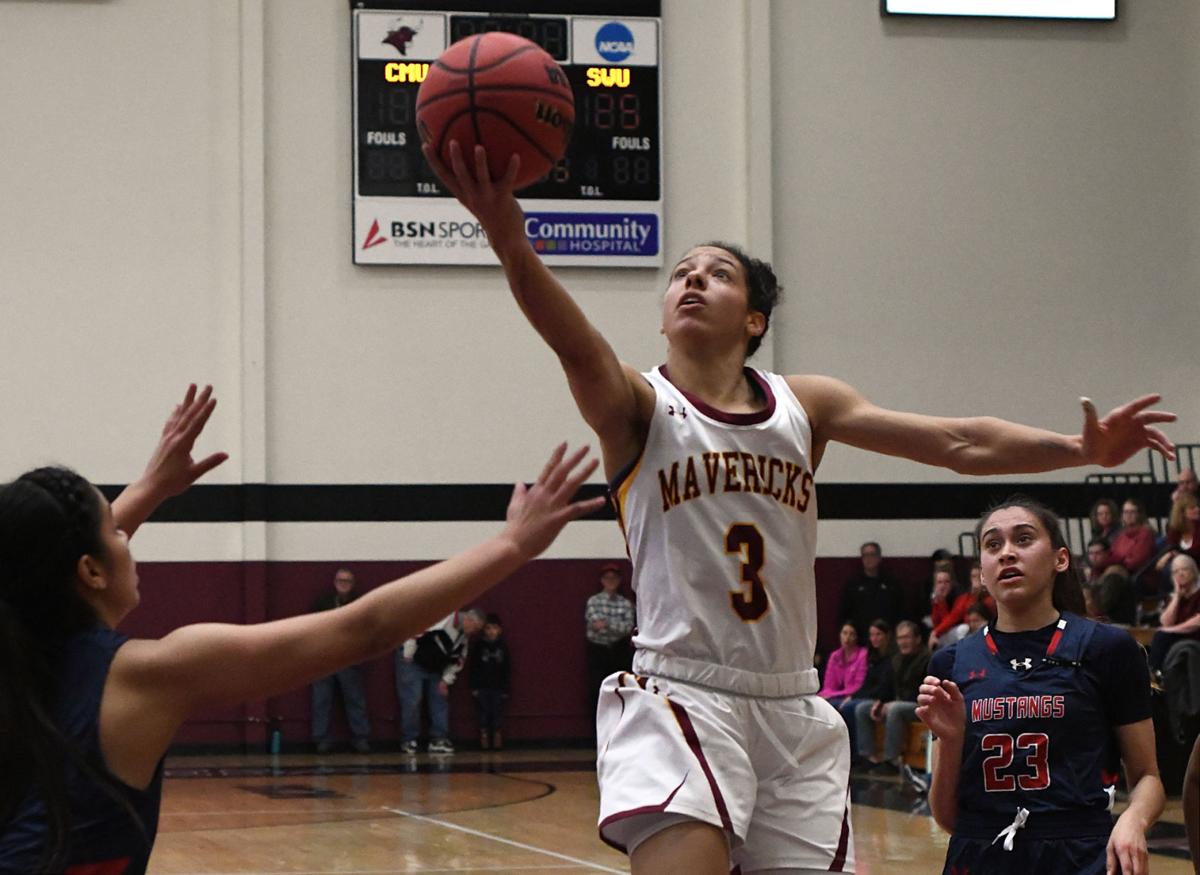 Gretel Daugherty/Special to the Sentinel

Daniella Turner has been the go-to scorer for the Colorado Mesa women’s basketball team this season, averaging 16.1 pointer per game. Coach Taylor Wagner is hoping to get some more balance from others.

Colorado Mesa’s Kolton Peterson, 15, is No. 3 in the nation in 3-point shooting, making 52.6% of his attempts — including making at least one 3 in every game this season. The Mavs return from the break beginning today.

Gretel Daugherty/Special to the Sentinel

Daniella Turner has been the go-to scorer for the Colorado Mesa women’s basketball team this season, averaging 16.1 pointer per game. Coach Taylor Wagner is hoping to get some more balance from others.

The floor at Colorado Mesa was stripped down to the bare wood and refinished during the 10-day break, with much of the same design as before, but the lanes are now darker brown.

When the basketball teams returned for practice this week, they were relegated to the Hamilton Rec Center for a couple of days, but got on the main floor again Wednesday before heading out Thursday to South Dakota, where they’ll open the second half of the season playing South Dakota Mines and Black Hills State this weekend.

The NCAA Division II-mandated break comes at a good time for the players, who get to spend the holidays at home and have some time for nagging injuries to heal.

“Coming back from break is always hard,” CMU men’s coach Mike DeGeorge said. “They had 10 days off, and I’ve had teams where you push them too hard, their legs are gone by the weekend, and then you have teams that come back and just aren’t ready to play by the time you get to the weekend. It’s that balance of how hard you go and try to get them back in game condition and the rhythm of how hard you have to compete.”

The Mavericks (8-3, 4-1 RMAC) finished 2019 with a three-game winning streak, winning eight of nine, despite falling behind and going on prolonged scoring droughts.

“We do have some maturity, guys that expect success and expect to win but understand this is going to be hard,” DeGeorge said. “When we’ve faced adversity it’s kind of rallied them together, not split them off individually, which, to me, is the greatest indication of what this group can accomplish because of how they’ve handled the tougher times we’ve had.”

For the second straight year, the men’s team expects to add a player for the second half, this time 6-foot-10 center Ethan Richardson, a junior transfer from — where else? — Fresno City College.

Richardson signed with the University of West Virginia last spring but didn’t enroll there. He needed to pass a class this fall to enroll at CMU and earned a B, DeGeorge said. Because CMU’s admissions department was closed until Thursday for the holidays, he hasn’t been admitted or cleared to practice. DeGeorge hopes that will be resolved by Monday.

“He’s long and skilled around the basket. He finishes like Tommy (Nuno) does around the basket, but he’s 6-9 (Fresno listed him at 6-10) and he bounces quickly off his feet,” DeGeorge said. “He’s potentially a significant contributor and he gives us something we haven’t had, that pick-and-roll threat.”

As it has with all of the transfers, it’ll take some time for Richardson to get comfortable in CMU’s system, but by February, DeGeorge hopes it all comes together.

“The group as a whole has started to understand and sustain principles within our defense. The last two weekend’s we saw another level of sustaining our defensive approach team-wise,” the Mavs’ second-year coach said. “Individually we’re able to guard one on one. Individually offensively guys are getting more and more comfortable and on the same page in terms of what their roles should be and their comfort level of what they should be. If we continue to fine-tune that, I think the guys will continue to execute more and more on a high level.”

For the women’s team, it’s also a matter of getting more comfortable in offensive roles.

The Mavericks (9-2, 5-0) have more than bought into the defensive concepts Taylor Wagner preaches. CMU is No. 1 in the nation in field goal defense (29.8%), and gives up only 45.8 points per game, also the best in Division II.

The offense puts up 64.7 points a game, giving the Mavs an 18.9-point scoring margin, but they haven’t reached their potential on that end of the floor.

“Once we start hitting some shots and get some kids some confidence, we can be a dangerous team,” Wagner said.

Mesa enters the weekend on a seven-game winning streak and has shown it’s still the team to beat in the RMAC.

“I think for us to make a good run here in the second semester, the rebounding can improve a little bit on both sides of the ball,” Wagner said. “We’ve got to get some kids going. Dani (Turner) is playing well (16.1 points a game off the bench) but we need a couple of kids to complement her game. We need to keep playing the defense we’ve been playing, but we need to pick it up on the offense a little bit more down the stretch.”