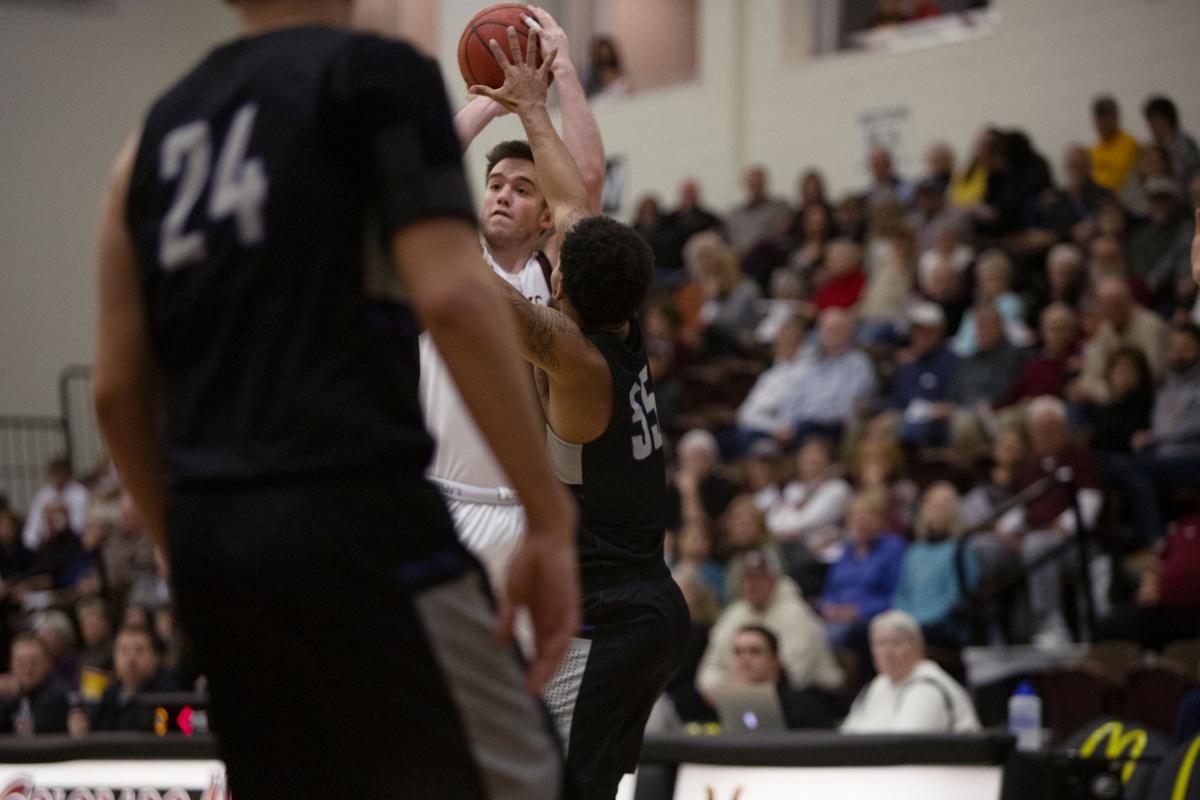 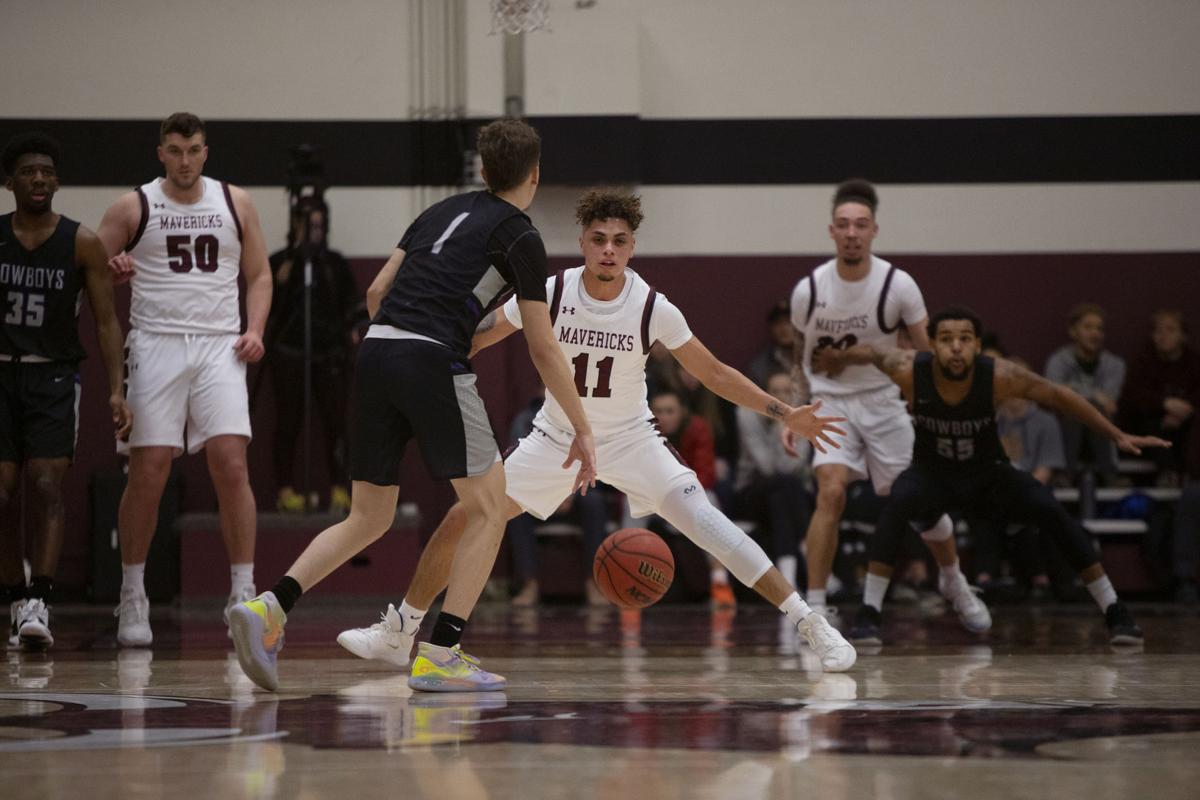 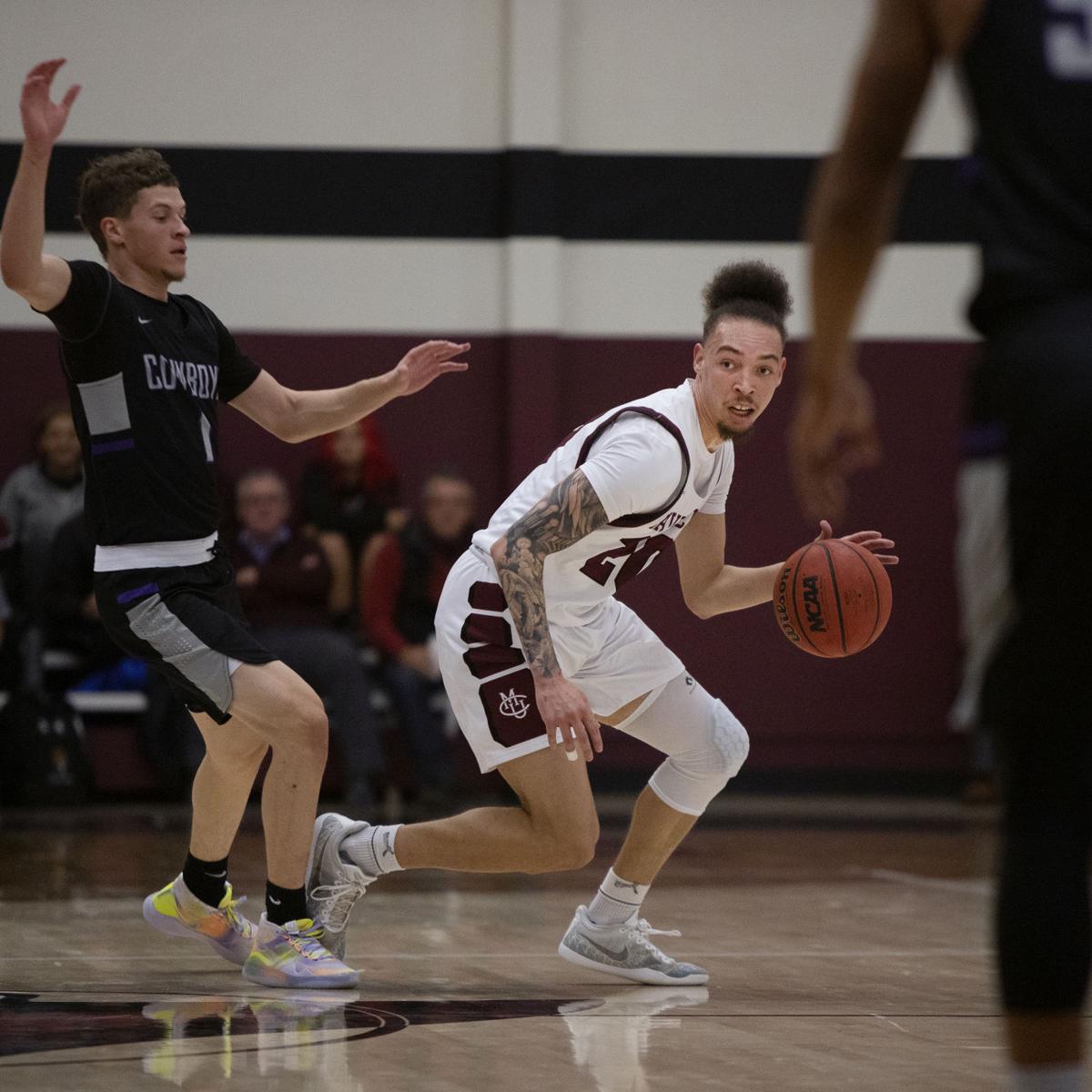 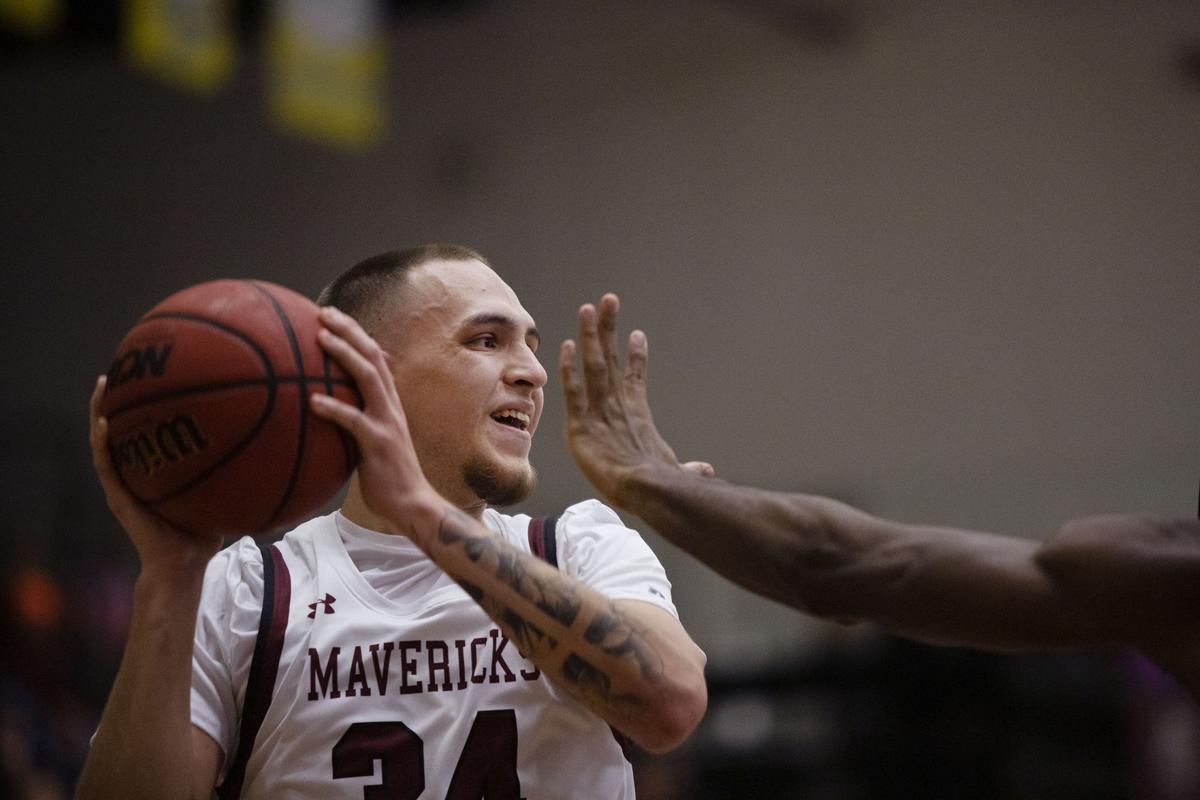 Colorado Mesa University center Ethan Richardson had to adjust to the altitude after arriving to Grand Junction from Fresno City College in California. 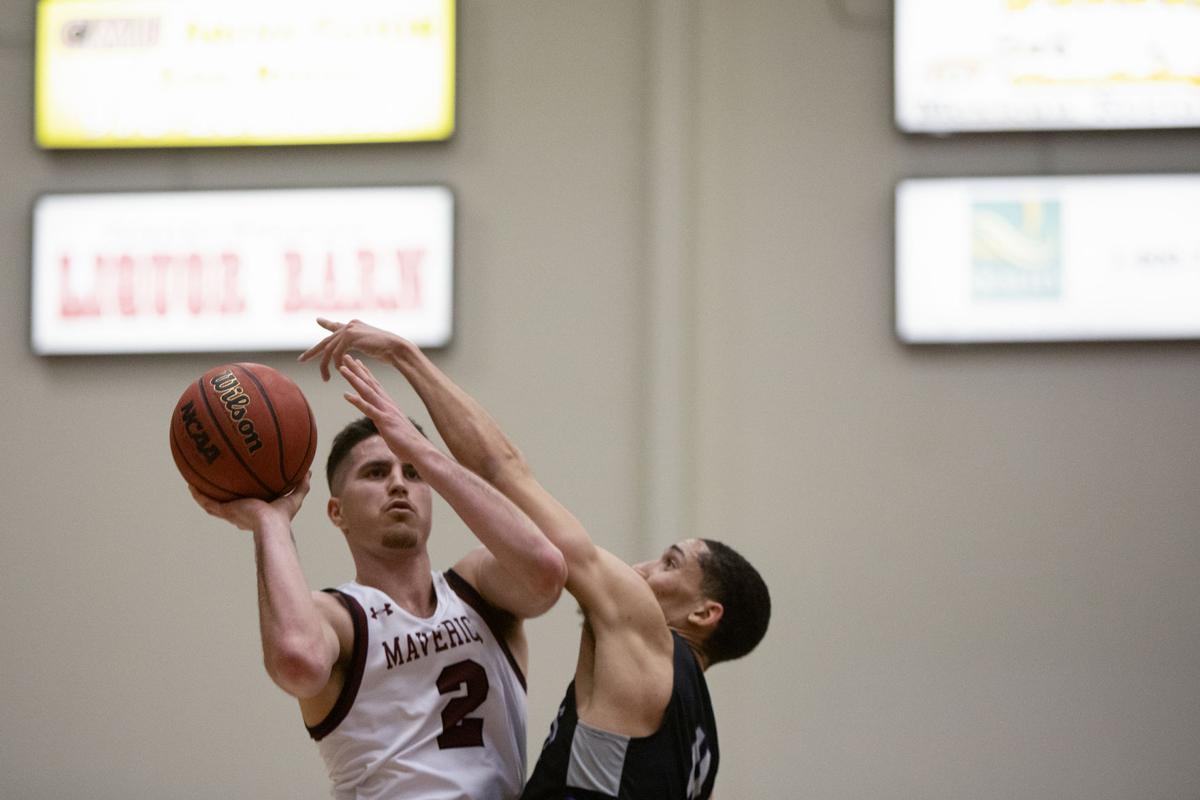 Colorado Mesa’s Tommy Nuno makes a contested 3-pointer late in the first half Friday night in the Mavs’ 96-79 victory over New Mexico Highlands at Brownson Arena. Nuno recorded his first career triple-double, believed to be the first in Mesa history, finishing 24 points, 10 rebounds and 10 assists. In his first game at Colorado Mesa, Ethan Richardson, below, scored 12 points.

Colorado Mesa University center Ethan Richardson had to adjust to the altitude after arriving to Grand Junction from Fresno City College in California.

Colorado Mesa’s Tommy Nuno makes a contested 3-pointer late in the first half Friday night in the Mavs’ 96-79 victory over New Mexico Highlands at Brownson Arena. Nuno recorded his first career triple-double, believed to be the first in Mesa history, finishing 24 points, 10 rebounds and 10 assists. In his first game at Colorado Mesa, Ethan Richardson, below, scored 12 points.

Tommy Nuno does a little bit of everything for the Colorado Mesa men’s basketball team. Friday night, the senior guard did a lot of everything, recording his first career triple-double and leading the Mavericks to an impressive 96-79 victory over New Mexico Highlands at Brownson Arena.

It’s believed to be the first triple-double in program history.

“He does everything for us, he can guard all five positions, he takes the ball out, he handles the pressure, he’s on ball screens, he can play in the post, just does everything,” CMU coach Mike DeGeorge said.

“Just finding the opening,” Nuno said of his big night, especially his 10 assists. “They stopped helping off other people onto me, so it was one-on-one situations, so I just tried to take advantage. There were open gaps.”

Instead, it was the Mavericks who had the big night offensively, getting good ball movement once they figured out how to break the Cowboys’ full-court press.

“That was probably the second time we’ve faced the press all season,” Nuno said, “so it was just getting the right read.”

Mesa had five players score in double figures, including the newest member on the roster, 6-foot-10 center Ethan Richardson, whose first practice was Monday. Richardson transferred from Fresno City College, and had signed with West Virginia. Some grade issues caused him to not enroll there, but he took the necessary classes first semester to become eligible and rejoined several of his junior college teammates at CMU. He scored 12 points and had four rebounds in just less than 16 minutes off the bench.

Richardson scored about 30 seconds into his career, a baby hook inside to tie the game at 9-9.

“Having him, it just opens everything up having a big guy you can throw it into and get a big bucket,” Nuno said. “He sets screens, rolls, rebounds, he does all the little things and all the big things. It’s so nice having him, it makes my job so much easier.”

“Probably the most difficult thing was (learning) the plays, but everything else, the guys were open arms when I walked in. As soon as I got here they were ready to implement me into the lineup and get me going,” he said. “He said I make his job easier, he makes my job easier. All I do is set a screen; he’s throwing it to me and all I have to do is lay it up. A triple-double, he’s doing everything.”

The Mavericks (9-5, 5-3) built a 10-point halftime lead when Nuno muscled up a double-clutch, triple-teamed 3-pointer at the buzzer. The Cowboys, coached by former CMU All-American guard Michael Dominguez, went to a smaller lineup and played zone in the second half and got the game tied at 54-54 in the first five minutes.

Mesa responded with a 14-3 run after going to a smaller lineup, and never let the Cowboys get closer than eight points the rest of the way.

“It’s pretty much been the trademark this year. When we have those rough patches, it doesn’t snowball on us,” DeGeorge said. “This team has the poise and self-confidence to rally and get it going.”

Michael Skinner finished with 19 points and Kolton Peterson and Jared Small had a dozen each in a game the Mavericks had to win after dropping both road games last weekend.

Earlier this season when the Colorado Mesa women’s basketball team played against a zone, it was a struggle to knock down shots.

That was not the case against New Mexico Highlands in the Mavs’ 78-33 runaway victory.

“We should be excited to see a zone,” said Kylyn Rigsby, who hit five of CMU’s season-high 14 3-pointers, including the first shot of the game. “Zones give us shots as long as we move and do the right stuff. We did a lot better and weren’t scared when we saw it. Before we were a little tentative when we saw a zone, but tonight it was like, I wish you would.”

Rigsby scored 11 of her 17 points in the first quarter, and also drew the assignment of guarding Highlands’ leading scorer, Jordyn Lewis, who was averaging 18.8 points a game. Lewis, clearly frustrated by the Mavs’ defensive efforts, finished with 12, making four of 10 from the 3-point line. When Rigsby was out of the game, Sophie Anderson or Elly Walters took over the primary duty of guarding Lewis.

“The key is don’t let her catch, active feet the whole time and really taking pride in the defense,” Rigsby said.

As for the shooting, the Mavericks (12-2, 8-0 RMAC) attempted 34 3-pointers, shot 41 percent from long range and nearly 47 percent overall, running their winning streak to 10 games.

“The zone invites (3-pointers), that was the shot there,” CMU coach Taylor Wagner said. “When it was going in, it was good. It was good to see Ky shoot the ball well. I don’t necessarily think you need to do that all the time, but those were the shots that were given and we just talked about, hey, if we shoot it, we’ve got to go in and crash the boards.”

Shooting drills and running the offense against zone defenses were prioritized in practice all week, and it showed. Mesa led 26-2 after the first quarter and 42-13 at the half. Quick ball movement led to open shots — the Mavericks had 25 assists on 29 buckets. Defensively, they allowed Highlands (1-12, 0-8) to shoot only 25.5% and forced the Cowboys into 23 turnovers. Mesa scored 26 points off turnovers.

“We worked on (ball movement),” Rigsby said, “and I think we took it from drills to skills and from practice to the game.”