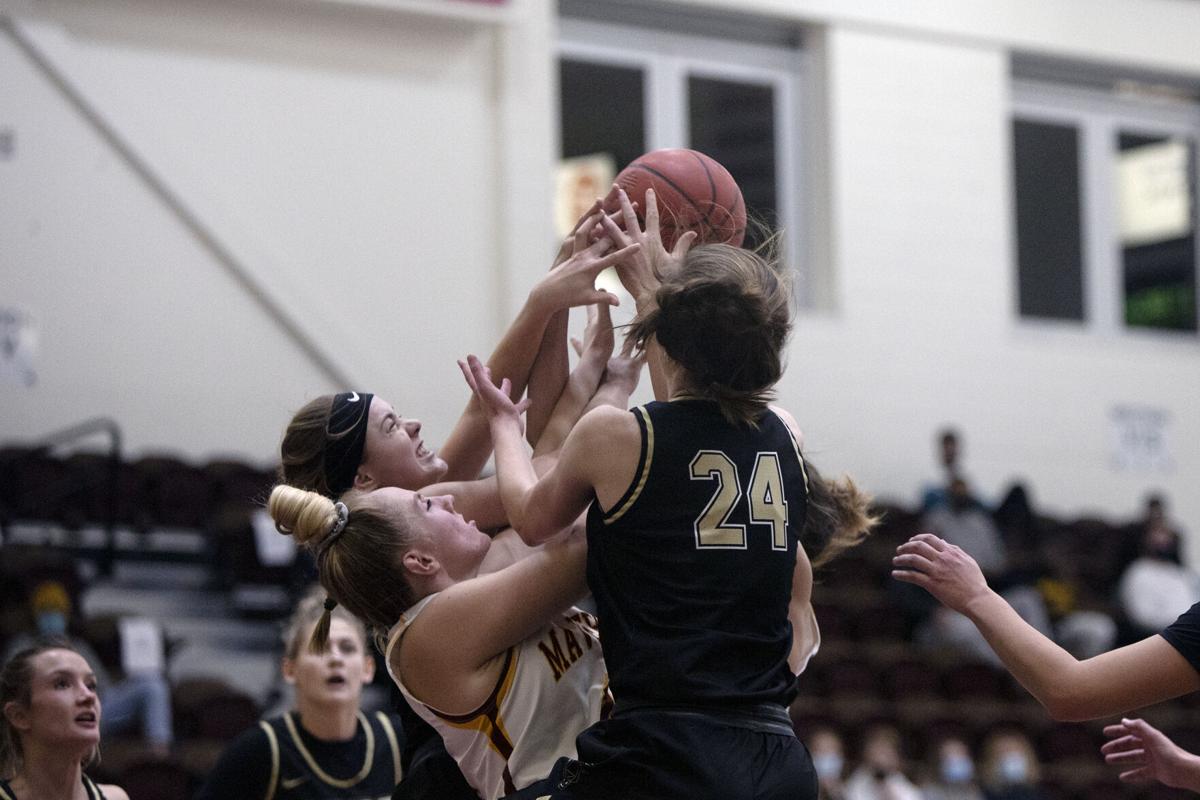 Colorado Mesa’s Sierra McNicol, center, battles for a rebound Monday night against a pair of CU-Colorado Springs players in the Mavs’ 89-57 victory at Brownson Arena. Second-chance points were big in Mesa’s win. 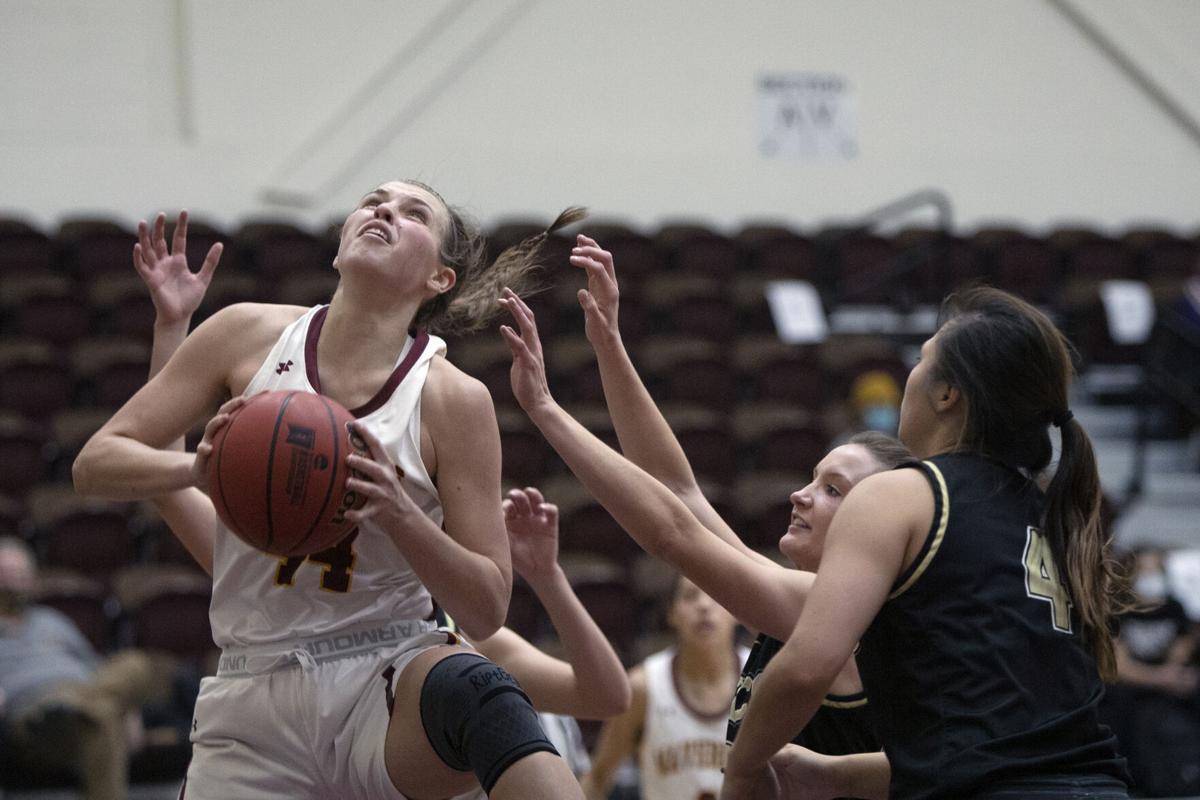 Kelsey Siemons, 44, drives in for a layup Monday night in the Mavs' 89-57 victory over CU-Colorado Springs at Brownson Arena. Siemons scored 14 points and added eight rebounds in the win. 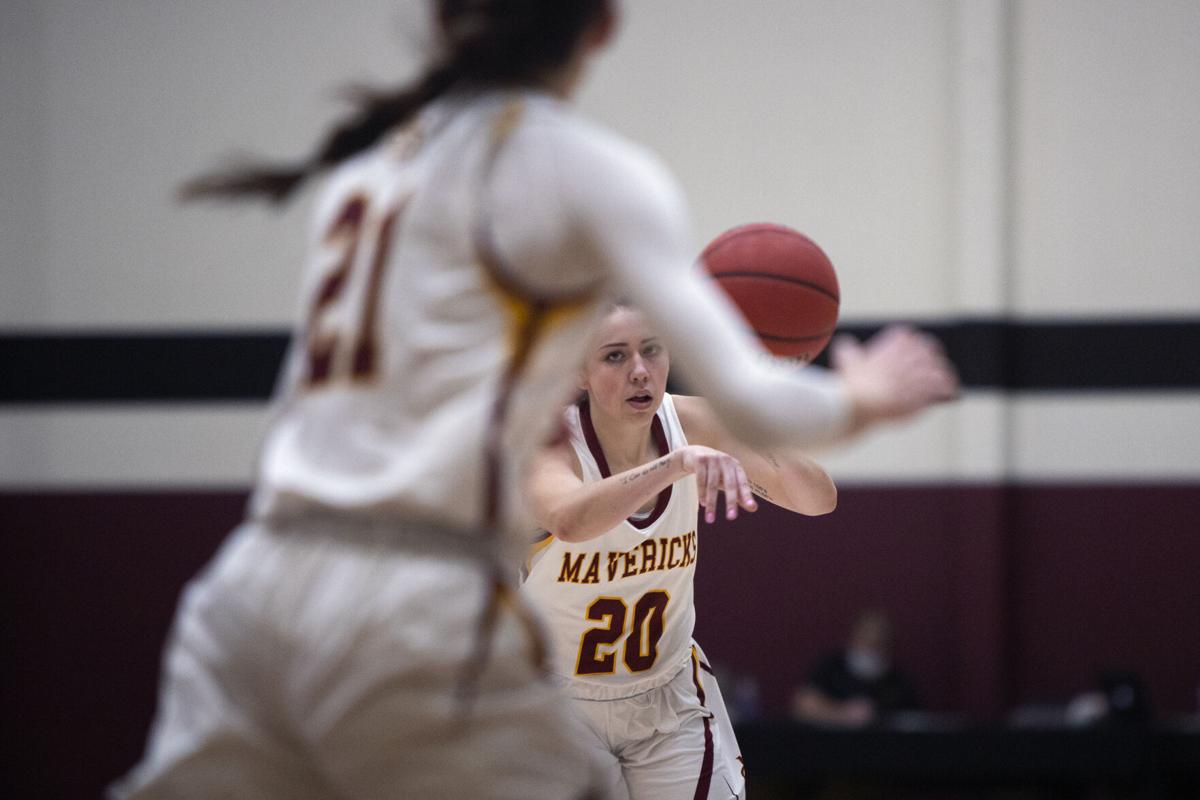 Colorado Mesa's Natalie Bartle, 20, passes the ball to Morgan Myers-Pack, 21, on Monday during the Mavs' 89-57 victor over CU-Colorado Springs at Brownson Arena. 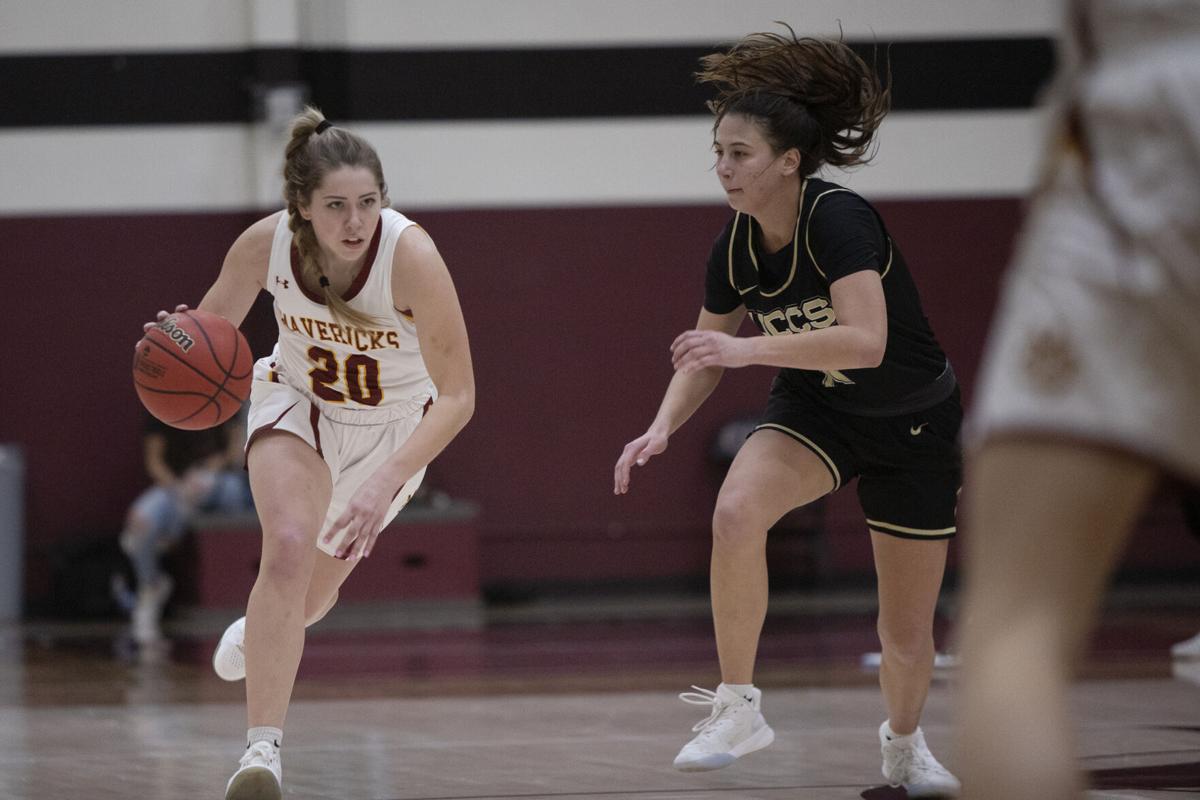 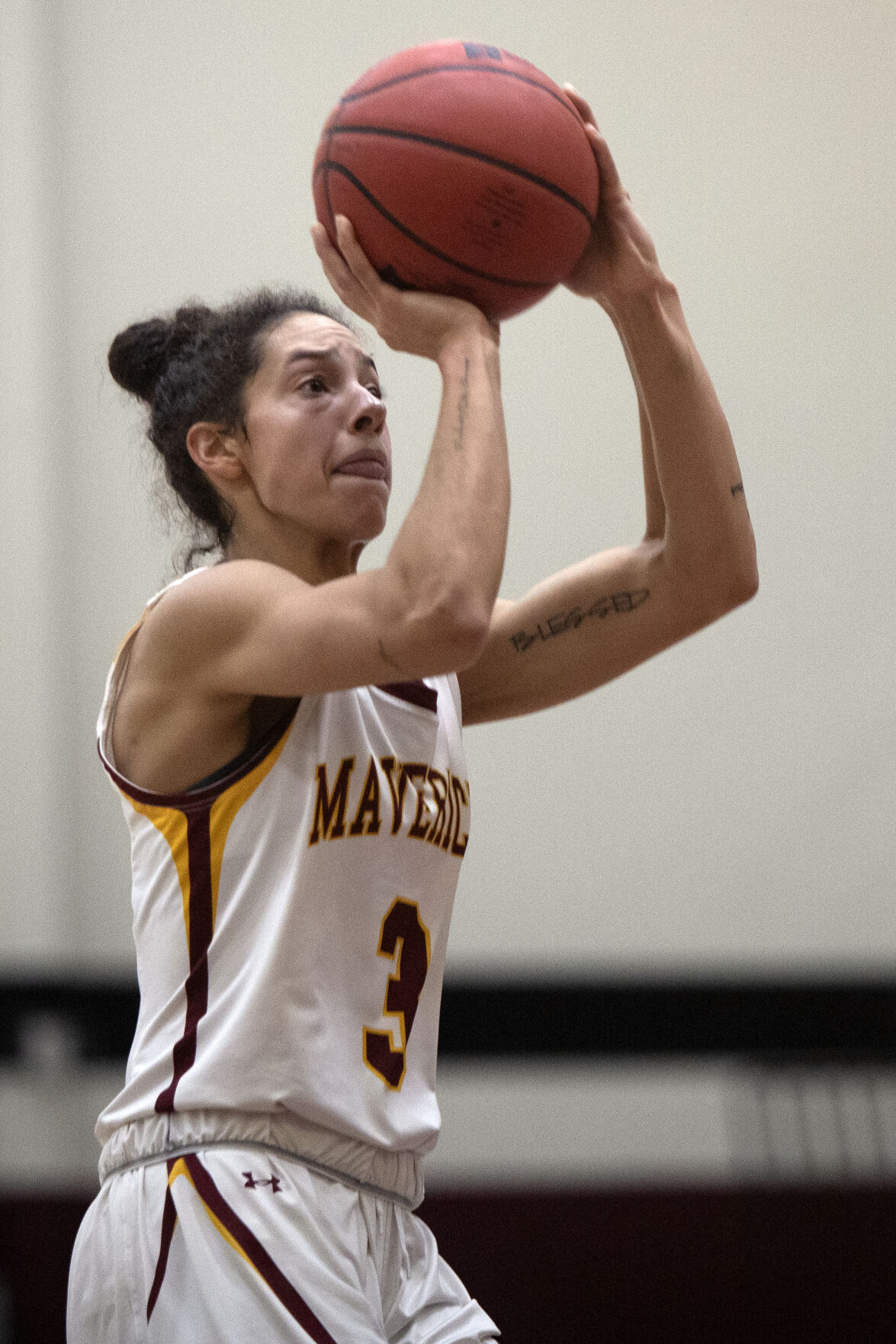 Colorado Mesa’s Sierra McNicol, center, battles for a rebound Monday night against a pair of CU-Colorado Springs players in the Mavs’ 89-57 victory at Brownson Arena. Second-chance points were big in Mesa’s win.

Kelsey Siemons, 44, drives in for a layup Monday night in the Mavs' 89-57 victory over CU-Colorado Springs at Brownson Arena. Siemons scored 14 points and added eight rebounds in the win.

Colorado Mesa's Natalie Bartle, 20, passes the ball to Morgan Myers-Pack, 21, on Monday during the Mavs' 89-57 victor over CU-Colorado Springs at Brownson Arena.

Taylor Wagner can always find something to challenge the Colorado Mesa women’s basketball team to do better.

Monday night, one of those challenges was for the post players to hit the offensive boards more than the guards.

“Our two best offensive rebounders are the Sophies (Anderson and Hadad) and we want some of the other girls to kind of get in the action and keep it going,” Wagner said.

Kelsey Siemons took that to heart — the Mavericks’ 6-foot-1 senior post has always been perimeter-oriented, but Monday posted up more and was in position to grab four offensive boards. CMU score a dozen second-chance points in an 89-57 runaway victory over the University of Colorado-Colorado Springs.

“This week at practice, and even before the game, Coach kind of challenged everyone to go in and get more offensive boards this week,” said Siemons, who finished with 14 points and eight rebounds. “And he said, ‘You know, the two guards, the two Sophies, are leading us in O-boards, I think a few more of you can do it,’ so I kind of took it to heart and said, ‘Why not me?’ ’’

The Mavericks found Sierra McNicol, Siemons and Monica Brooks inside and the guards continued to attack inside-out, combining for 42 points in the paint.

“I feel like from the first starting five to everyone down the bench, they have a role that they play, and they have a special talent and skill that they bring or else they wouldn’t be on this team,” said McNicol, who had 11 points, four rebounds, four assists and three steals. “I truly believe in everybody. Everybody brings a spark and it might be on different nights, it might be different things, scoring, rebounds, assists, steals, whatever it may be, but this team is very special.”

The Mountain Lions were playing in only their third game because of COVID-19 issues earlier in the season, and early on hung with the Mavericks (6-1, 6-1 RMAC) by jumping into a half-court trap, slowing down the offense.

“I think we got spooked just a little bit (by the trap),” said Wagner, who won his 200th game at Colorado Mesa, No. 150 in the RMAC. “But we still scored 50 points (in the first half), it was just in a different way. We usually set up our offense, where this was a little more freelancing, and we have the girls to do that. So it might have looked a little different, it might have felt a little bit different, but we were still getting the end results. And we were still shooting the high percentage in that first half, it was just a different way of how we scored.”

The Mountain Lions got to the free-throw line early and often, hitting 22 of 23 in the game to stay in it, but after shooting nearly 55% from the field in the first half, they hit a wall and scored only 21 points in the second half. They scored only eight points in the fourth quarter and shot 11% as the Mavs’ lead swelled to 34 points.

When they backed off the trap, the Mavericks got the floor spread more, allowing them to drive or set screens for open layups. Dani Turner had 20 points and Kylyn Rigsby 10 in a balanced attack. Mesa’s bench contributed 28 points, with Natalie Bartle scoring nine and Savannah Domgaard a career-high eight.

Wagner quickly deflected the credit for his milestone victory to his players.

“The girls all won them; I didn’t take a shot at all. And I look back over the nine teams and a lot of girls, they won a lot of ballgames,” he said. “I think the credit goes to them and what they’ve done on the court.”

His players sent the credit right back to Wagner, who has coached the Mavs in 247 games since being hired in 2012. He’s second all-time to Steve Kirkham’s 299 wins.

“I think we work hard and it shows with what we produce, with the back-to-back championships and Wags with his 200th win,” Siemons said. “And I know he says it’s the players but I don’t think we’d win as many games if we didn’t have Wags as our coach, so credit to him for that one.”

Packers put Week 6 loss to Buccaneers in rearview, focus on preparation with Super Bowl on the line