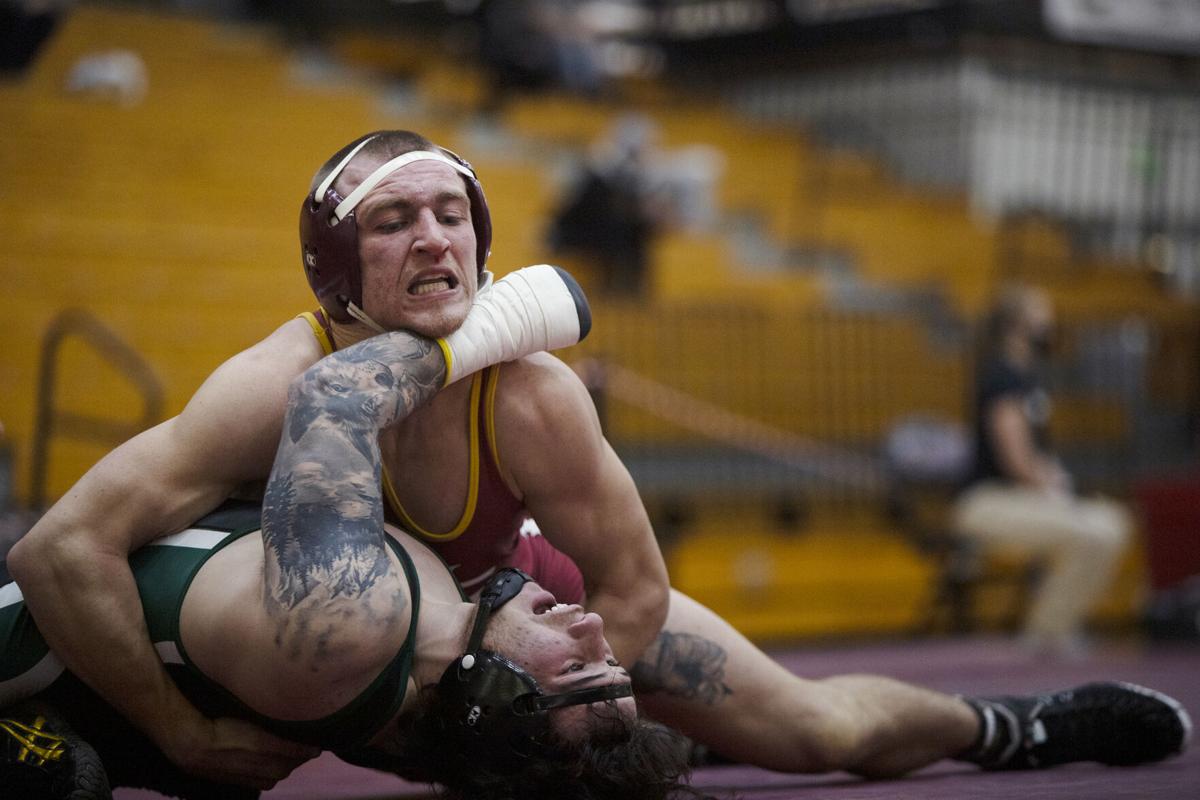 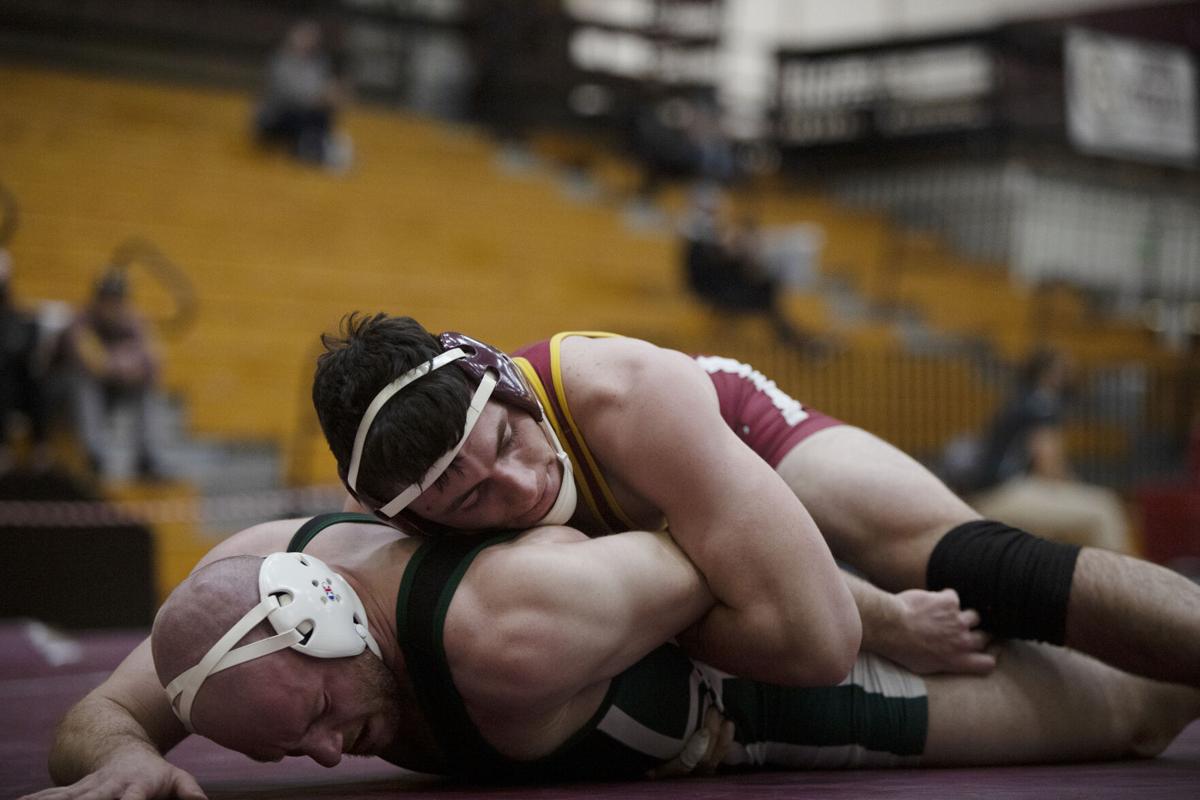 Nolan Krone, top, is one of four returning national qualifiers for Colorado Mesa. The Mavericks have canceled their final two duals, including tonight’s Battle in Brownson against Western Colorado, to reduce the chance of wrestlers being exposed to COVID-19 ahead of the regional tournament, which CMU will host Feb. 28 at Brownson Arena. 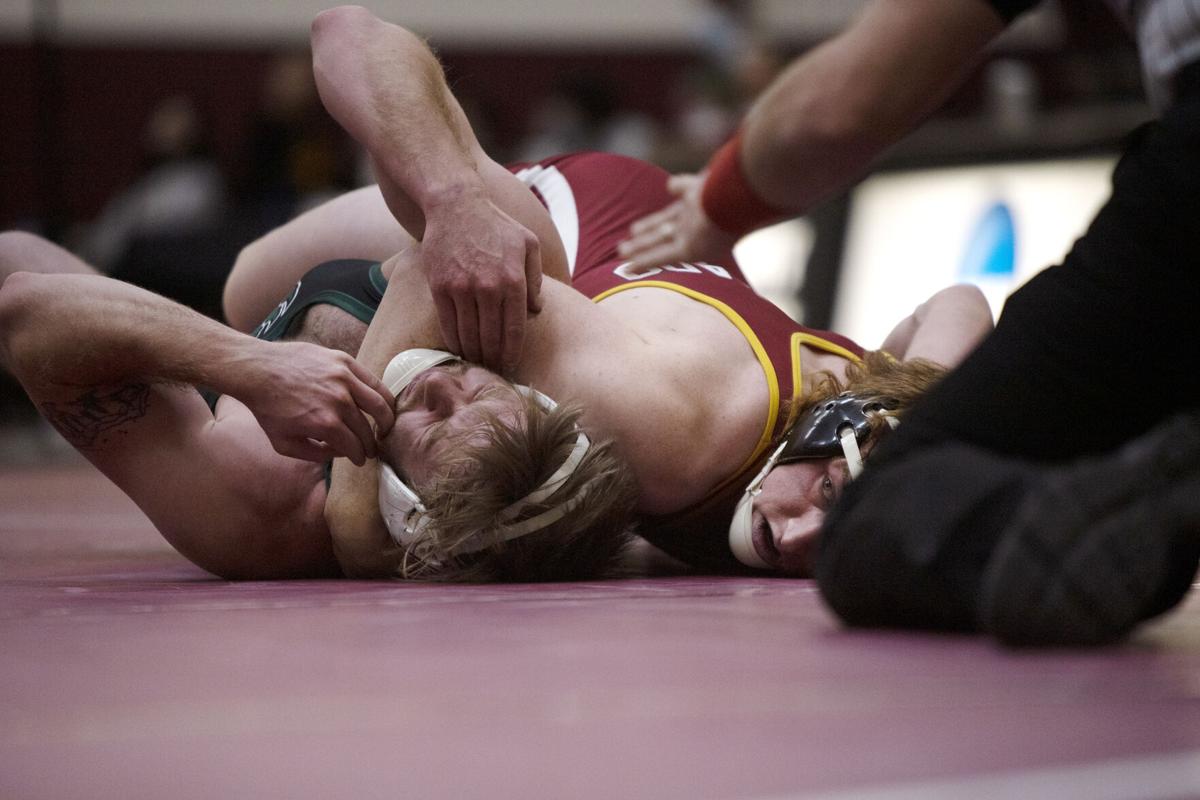 Nolan Krone, top, is one of four returning national qualifiers for Colorado Mesa. The Mavericks have canceled their final two duals, including tonight’s Battle in Brownson against Western Colorado, to reduce the chance of wrestlers being exposed to COVID-19 ahead of the regional tournament, which CMU will host Feb. 28 at Brownson Arena.

The Colorado Mesa University men’s wrestling team’s dual against No. 10 Adams State on Saturday was emblematic of its start to this season; it fell in an early hole, only to pile on momentum with win after win.

After dropping three of the first four matches to the Grizzlies’ ranked wrestlers, the Mavericks won the final six matches of the dual at Brownson Arena for a 32-13 victory, their third straight over a ranked opponent. CMU improved to 3-2 after taking its Rocky Mountain Athletic Conference opener.

“For us, (the early losses) put a fire in our belly,” CMU coach Chuck Pipher said. “Guys didn’t like losing. ... It put us to work a little harder. ... I’m proud of the guys. They got a good win there. We’ve just got to keep plugging away.

“If we’re going to qualify (for the postseason), (Adams State) are some guys we’ve got to knock off there, for sure.”

Adams State’s Isaiah DeLe- Cerda, No. 5 at 125 pounds, won 8-4 over previously unbeaten Cian Apple to start off the evening. Jonathon Andreatta, No. 3 at 133, and Noah Hermosillo, No. 7 at 149, took down Collin Metzgar and Ryan Wheeler, respectively, to launch the Grizzlies to a 13-3 lead, with Daniel Magana’s 6-3 decision over Angel Flores serving as CMU’s only win up to that point.

The rest of the evening, however, was dominated by the Mavericks. Sophomore Dylan Ranieri, in his second match and first win of the season, cleverly avoided an early attempted leg sweep and used a second-period back points to eventually earn an 8-3 decision over senior Dylan Udero to trigger the Mavs’ momentum swing.

“The way that I came into this match, I knew I had to take it slow and take deep breaths,” Ranieri said. “I know how to wrestle. I know what I’m doing. It’s just a matter of getting in those scrambles and winning those, because that’s how you win matches here, positioning and getting the guy dominated.”

Junior Nolan Krone improved to 5-0 on the season at 184 pounds, pinning Gavin Davy at 4 minutes, 14 seconds, after trailing 2-1 after the first period.

“We just came out and did what we do,” Krone said. “We’ve been working hard to get here. We knew we had a tough team coming up this dual. We came out and performed how we wanted to, for sure.”

After two close early defeats by a combined three points, the Mavericks are full of confidence after their first RMAC dual.

“It’s definitely a confidence booster,” Krone said. “We’re finding out that we’re a lot better than we thought we were with this young team. It’s turning out to be a good-looking season here.”

The seventh-ranked Mavericks lost only one match in each of two duals at Limestone University in Gaffney, South Carolina, defeating No. 14 Limestone 36-5 and Ferrum College by the same score.

The Mavericks picked up three wins by forfeit against Limestone, but still handily won the dual, recording four technical falls and one pin. Freshman Tristan Kelly won a 10-0 technical fall at 170 pounds against Caitlyn Gilmore, who is ranked No. 8 in the nation at 155, but was wrestling up one weight class.

Ferrum forfeited five weight classes to the Mavericks, who won three of the four matches contested by technical fall. Jennesis Martinez, ranked No. 3 in the nation for the Mavericks, won her 101-pound bout 13-6. Anja Tschohl (116) and Kaylee Lacy (143), both ranked No. 7, received two forfeits, but Lacy won two exhibition matches on the day, one at 130 pounds and one at 155. Tschohl also won her one exhibition match.

The competition gets tougher for CMU today, facing No. 2 McKendree University, No. 3 Emmanuel College and No. 4 King University in Bristol, Tennessee.

Everything Tim Polasek said about taking over as Wyoming's offensive coordinator, reuniting with Craig Bohl