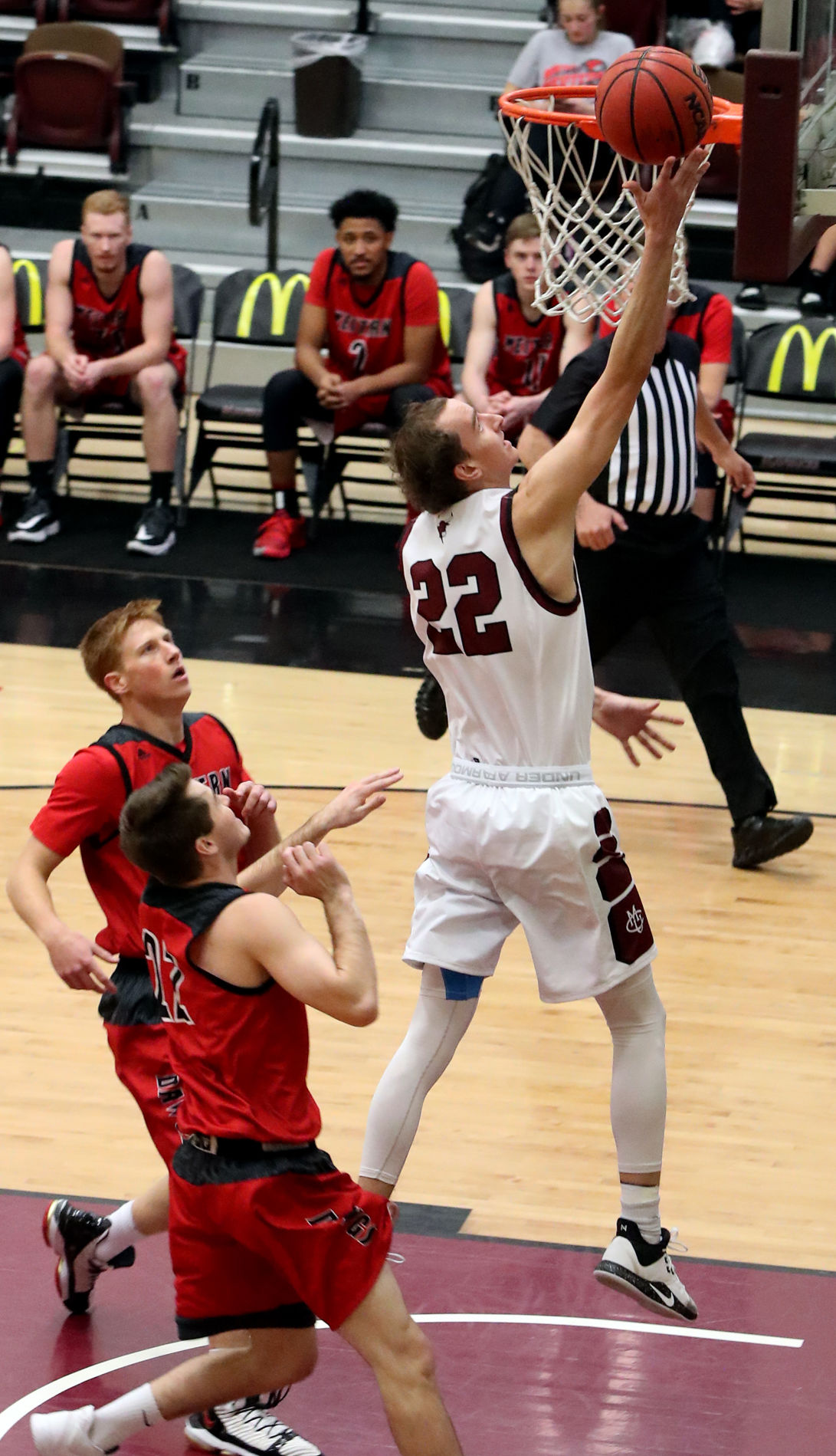 Colorado Mesa's Jess Spivey drives in to score last weekend in the Mavs' win over Montana Western. Mesa, which had only four players returning with much game experience, has started the season 4-2. Defense is the key for Kylyn Rigsby, below left, and the Mesa women's team, according to coach Taylor Wagner. 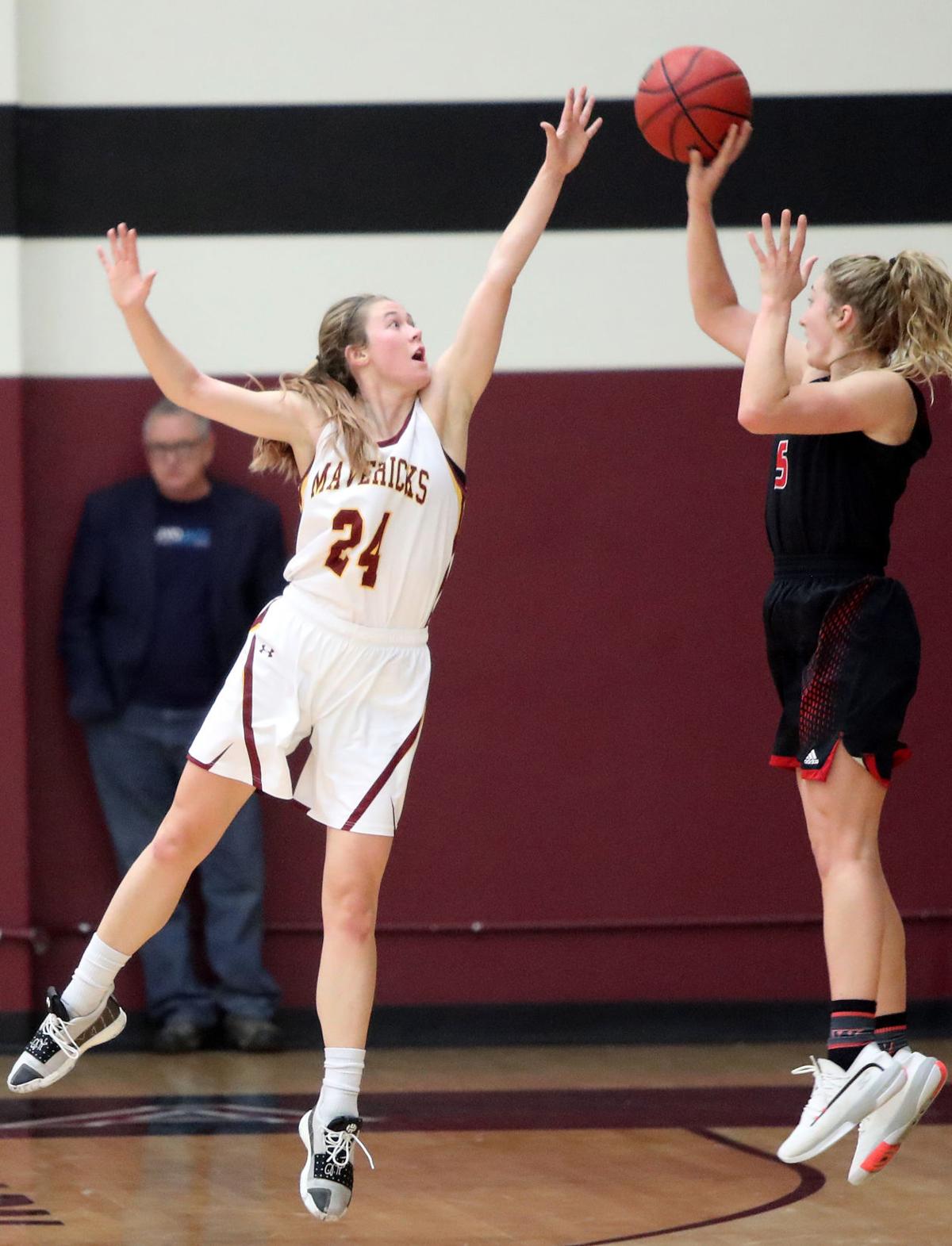 #24, CMU's Kylyn Rigsby trys to block a shot for the Mavs in a win over Montana Western.

Colorado Mesa's Jess Spivey drives in to score last weekend in the Mavs' win over Montana Western. Mesa, which had only four players returning with much game experience, has started the season 4-2. Defense is the key for Kylyn Rigsby, below left, and the Mesa women's team, according to coach Taylor Wagner.

#24, CMU's Kylyn Rigsby trys to block a shot for the Mavs in a win over Montana Western.

A couple of shots, a defensive stop or two, and the Colorado Mesa men's basketball team could be 6-0 heading into conference play.

In those six nonconference games, the Mavericks, with a half-dozen newcomers logging major minutes, have seen a little bit of everything.

Although there's still plenty of work to be done, they're ready to see how they stack up this weekend against two of the teams expected to compete for the RMAC championship, playing at CU-Colorado Springs on Friday and Colorado School of Mines on Saturday.

A handful of teams who weren't in Thanksgiving tournaments began conference play last week, with the Mountain Lions knocking off defending conference champs Mines 82-77 in Golden.

After a pair of close losses to teams in the Lone Star Conference to open the season, including losing on a 3-pointer at the buzzer, the Mavericks have won four in a row, including an overtime thriller after blowing a 20-point lead Friday, then going on a huge second-half run Saturday to turn a close game into a blowout in a matter of minutes.

"Comfortable is my key word," center Clay Verk said after CMU went 2-0 in its home tournament. "Everybody is feeling better about the offense and defense and getting it clicking."

Infusing five transfers into a program that had only four players returning with much game experience was a necessary gamble, one that's paying off.

Transfers trying to learn a system that's vastly different from the one they ran previously can sometimes revert back to old habits when things break down or they're surprised by something on the floor. Missouri Western, for example, hadn't pressured anyone in its previous games, but jumped in a press against Mesa last week.

It took a few trips to understand how to attack the press and the zone defense, but the Mavericks didn't panic, even though they lost the big lead.

It's also a matter of when for the 4-2 women's team, when they figure out their roles.

The Mavericks have had a little bit of trouble adjusting to life without sharpshooter Jaylyn Duran, who drew double- and triple-teams last season, which allowed others to get easy buckets. With Duran graduated, those easy shots aren't always there.

"I think that's the big thing. Who's taking the shot, when they're taking the shot, how to get open," CMU coach Taylor Wagner said after the Mavericks had to scramble back in the second half Saturday to beat defending NAIA national champion Montana Western.

"I told them in the locker room, everybody told me they wanted to play a bigger role and now when it's out there, you can't hide. Whether that's a shot, getting a stop, stepping up and making a free throw or getting a rebound, there's roles that need to be had on this team. Go out and do it."

For some reason, on Saturday nights, the Mavericks have come out less aggressive than they have on Friday nights, and their offense has dictated their defense. That's the opposite of what Wagner wants.

"Let your defense fuel your offense and you'll be in rhythm," he said. "A lot of kids go in and if they miss their first shot they're already determined they're not going to play defense because they're sad they missed a shot or turned it over.

"That's where we've got to get a little more mentally tough as a team. There's going to be battles and close games all year long. There's a lot of teams that are really even with each other and it's going to be a battle every single night."

After the Mavericks struggled to break down Montana Western's 2-3 zone, Wagner figures RMAC teams will take notice. The Mavs hit some crucial 3-pointers that loosened things up and turned up their defensive intensity, creating turnovers and easy baskets.

Senior point guard Sydni Brandon had five steals against Montana Western, including one in the closing minutes that helped seal the victory. She had nine steals, 11 assists and only one turnover in the two games and was selected the RMAC defensive player of the week. Brandon leads the conference with 18 steals.

"We have to be a little more mature," Wagner said. "In the first half if it doesn't go in, the defense (has to) become better. Where in the second half, shots went in and we said we're gonna guard. That's what we have to work on as a team and be great defensively every possession."