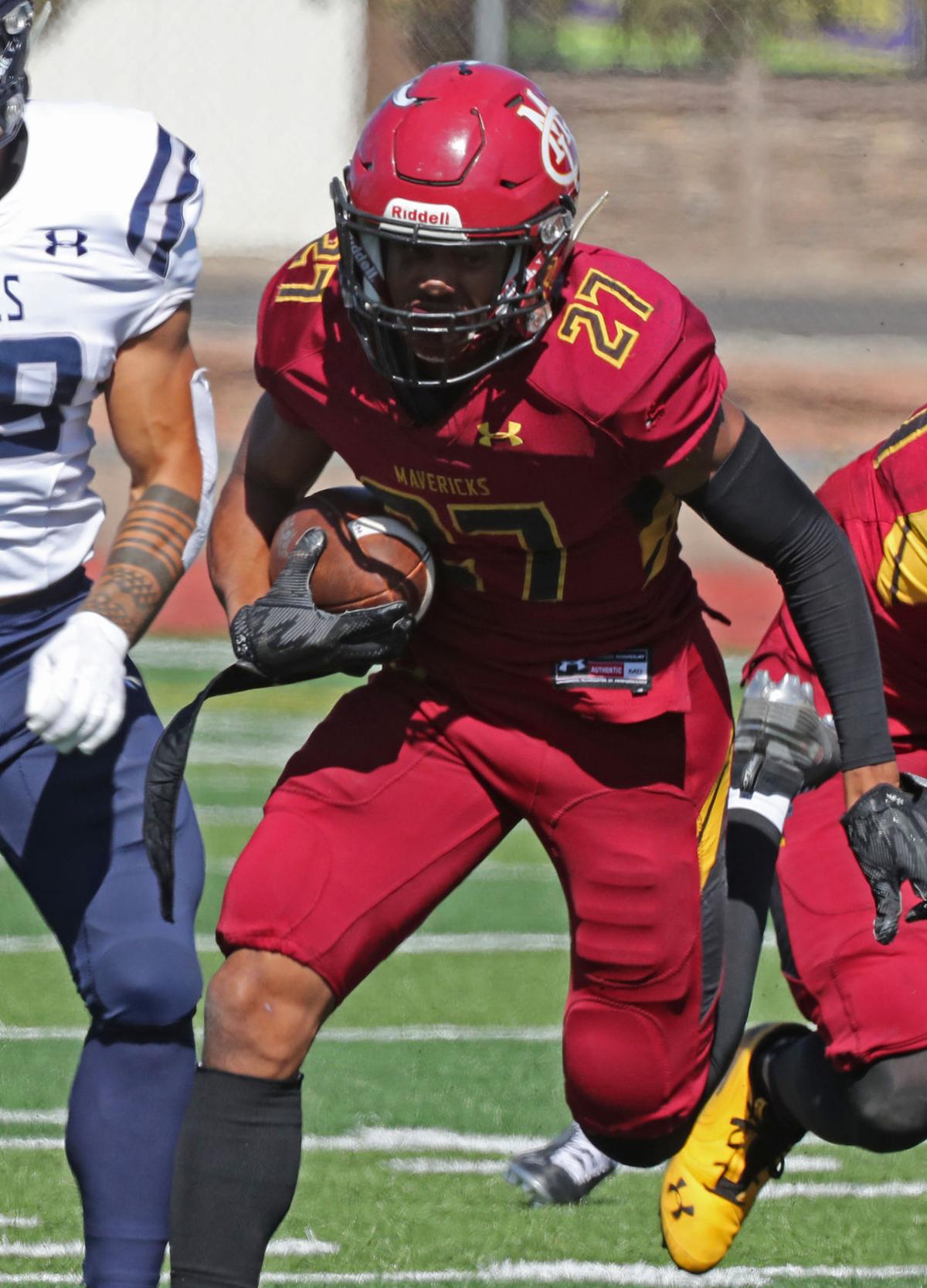 Justin White's ability to play on special teams got him on the field for Colorado Mesa as a freshman. The defensive back has blocked two kicks this season and has added kick returner to his resume. In addition to his special-teams duties, White is also starting at cornerback after an injury to Naijiel Hale. 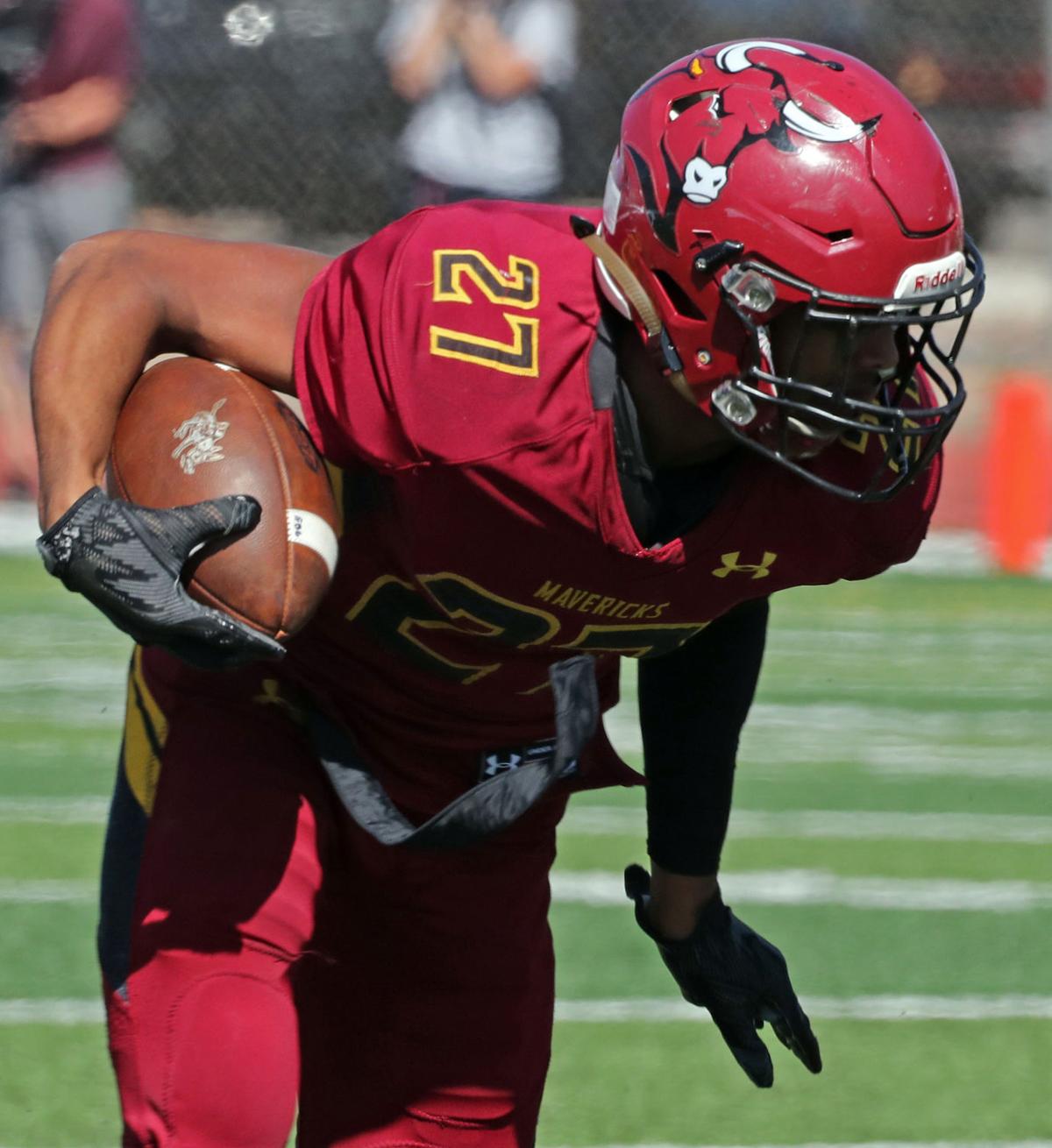 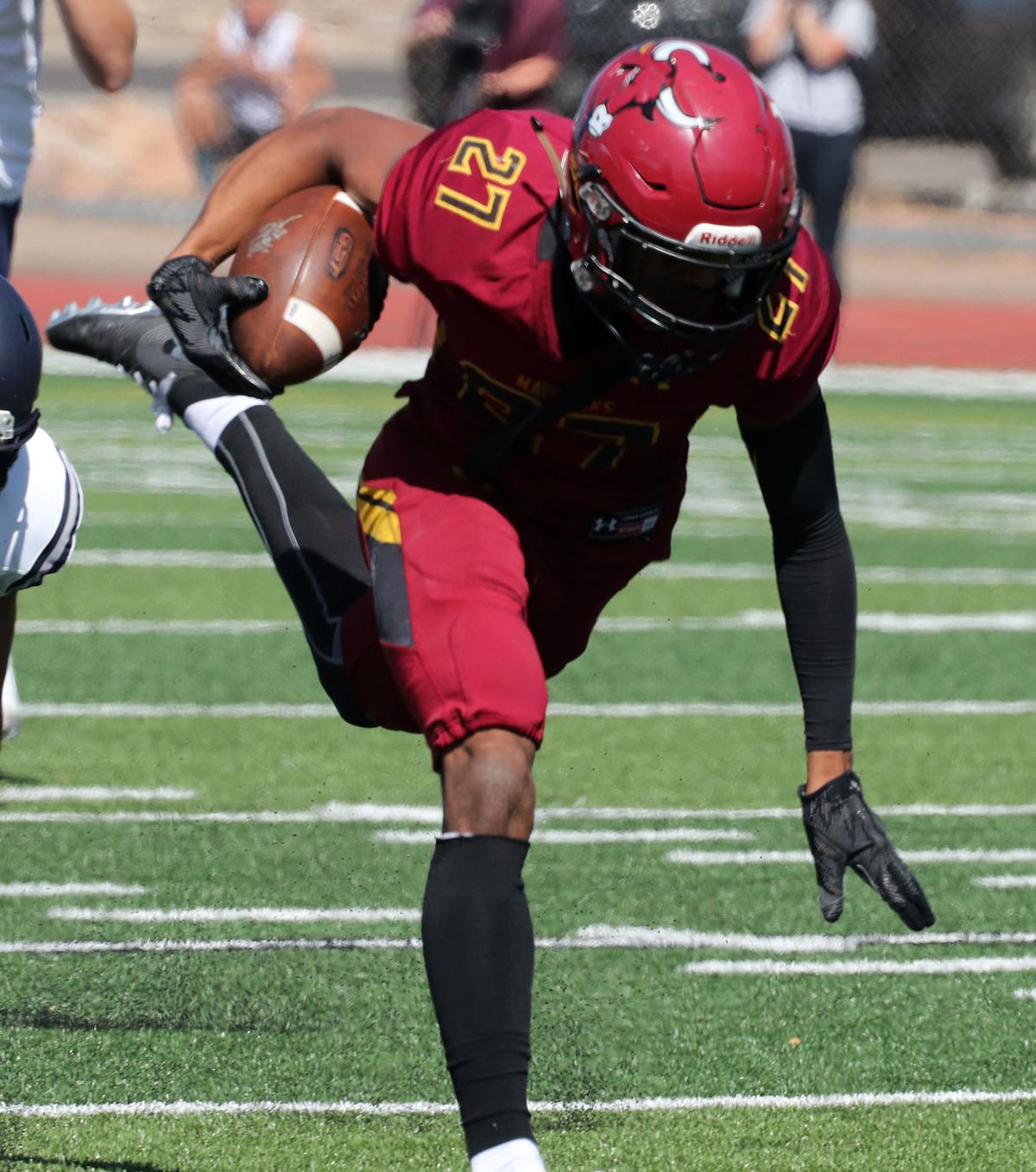 Justin White's ability to play on special teams got him on the field for Colorado Mesa as a freshman. The defensive back has blocked two kicks this season and has added kick returner to his resume. In addition to his special-teams duties, White is also starting at cornerback after an injury to Naijiel Hale.

The game was in the bag when Justin White stepped in front of a pass with less than 30 seconds to play two weeks ago at Chadron State.

Instincts took over, and White headed for the goal line, weaving around Eagles until he crossed the goal line.

CMU coach Russ Martin joked after the game that he would have liked it if White would have downed the ball and let the Mavs run out the clock, but he couldn't fault the freshman cornerback.

"Getting to play as a freshman is obviously a blessing and it was my first pick-six in awhile," White said a few days after the interception. "I got the pick and I just (saw) end zone and I was trying to get there."

So how long had it been since his last interception return for a touchdown?

When fall camp began, White was part of the incoming class of freshmen, most of whom are redshirting. White quickly got noticed as someone the Mavs could use on special teams.

"I feel like they noticed me the first day of practice," he said. "We do half (speed kicking drills) and I accidentally went when I wasn't supposed to and ended up blocking the kick, so they kind of went, 'OK.' They saw I could get off the ball and they took a liking to it, I guess."

He's in a 19-way tie for the Division II national lead with two blocked kicks so far.

"I just enjoy it," White said. "That's the first thing they told me I was going to be doing when I got here, so I just took the role and give it my all, to be honest."

His role has expanded.

White moved into the starting cornerback spot opposite Nick Ciccio three weeks ago when Naijiel Hale was injured. He's added kick returner to his duties with Isaac Salazar out with a leg injury.

Several players were injured during last week's loss to No. 10 Colorado School of Mines and their status might not be determined until game day.

Hayden Bollinger is listed as the starting quarterback despite being shaken up in the first quarter Saturday. Martin said earlier this week his status hadn't been finalized.

Aaron Howard and Bollinger have rotated in and out this season — no quarterback has taken every snap in any single game. The closest to playing a complete game was against Western Colorado, when Howard came out for one series. He was replaced by Rope Ruel, who threw a pick-six on his only play. Howard returned the next series.

Wide receiver Peter Anderson, who missed last week with a concussion, is back. Despite playing in only four games, Anderson is No. 2 in the RMAC with 535 receiving yards and yards per game, 107.

KJ Sapp, the Mavs' No. 2 wide receiver, is out after being injured on a touchdown reception last week.

The offensive line has been hit especially hard, with only center Ty Leonard playing in every game so far — the depth chart has drastically changed over the past two weeks.

Will Tuihalamaka, a 6-foot-5, 315-pound graduate transfer who played in 13 games the past two seasons at Florida Atlantic, is listed as the starting left tackle. It's his first game with the Mavericks, stepping in for Joe Bryson, who also missed last week with an injury.

The starting defensive unit is banged up, but not as much as the offense. There's one change from last week's starting lineup, with defensive end Kyle Schulman replacing Logan Bayus, who was injured against Mines.

"Josh is probably the busiest person on staff," Martin said of Josh Fullmer, the Mavs' head athletic trainer. "Last week was kind of a M*A*S*H ward afterwards. It's a situation where we're having guys work to get themselves ready; they're getting treatments they need to do, but the other thing is, we've got guys who have to step up.

"The younger guys are getting better as they get those reps. They know and understand the expectations of this program are still going to remain very, very high."

White came in confident he could contribute right away, but also knew he had a lot to learn.

"When I got here I tried to be confident but not too cocky at the same time, just try to be as humble as possible," said White, who is 5-foot-10, 175 pounds. "I made it very apparent that I was going to make myself undeniable. I wanted to be on the field however possible, whether it was special teams, corner, nickel, whatever it is. I just wanted to be on the field."

He's made some freshman mistakes, but he's also been quick to adjust.

"Just being thrown right into the fire, you have no choice but to adapt," White said. "You're either going to sink or you're going to float. They say the cream rises to the top and I feel like I'm on my way there."

"If anybody is writing this football team off, I don't think they understand the heart and the mind and the spirit of this group. ... I love coaching these guys. This is one of the teams that I really enjoy coaching, more than any I've had because of their situation of understanding we are continuing to move ahead. We have a really good football team here and you're going to see it on the field." — CMU coach Russ Martin