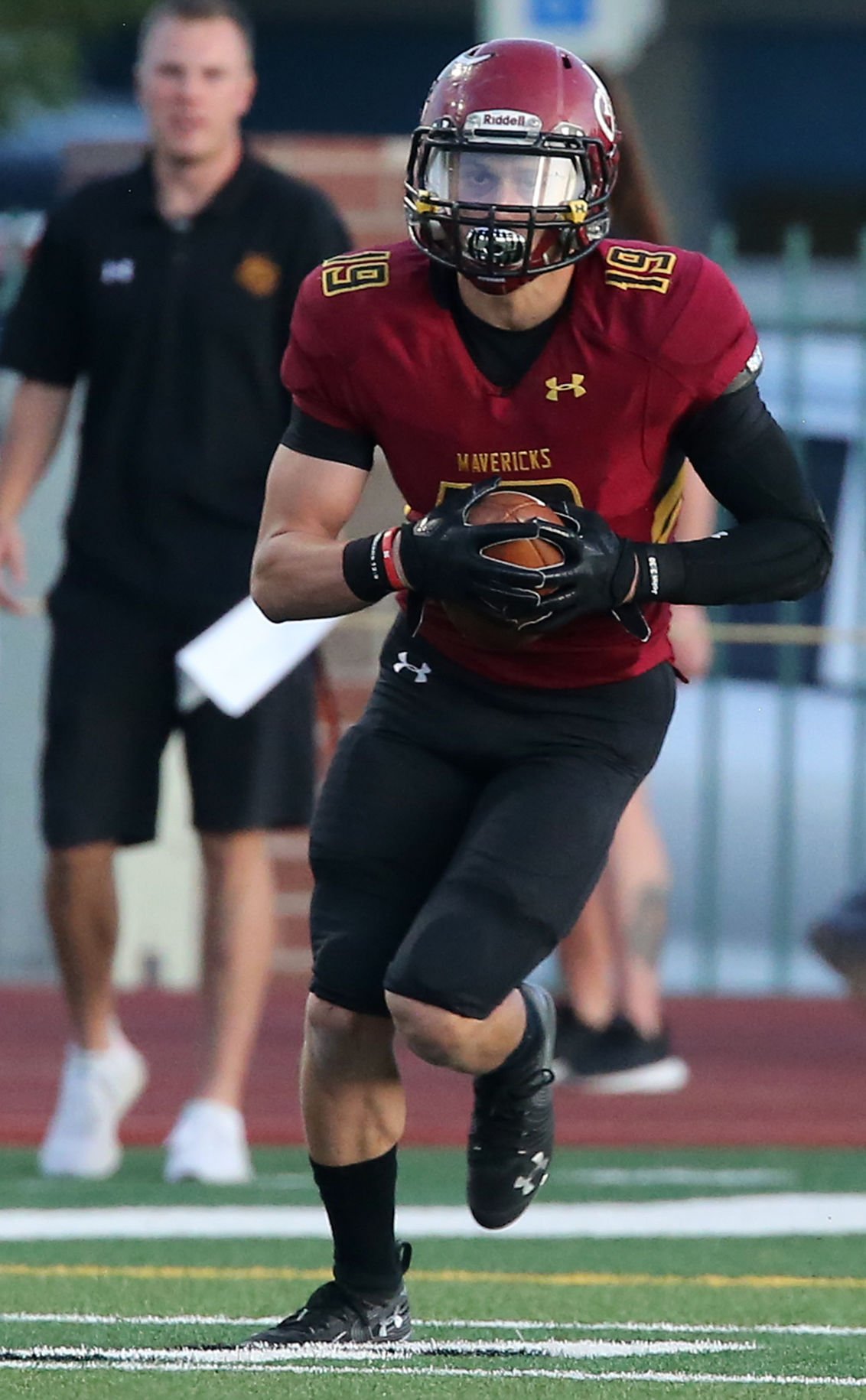 Colorado Mesa University safety Nick Ciccio was selected as a first-team All-American on Tuesday by the American Football Coaches Association. He picked off eight passes for the Mavericks, returning three for scores. 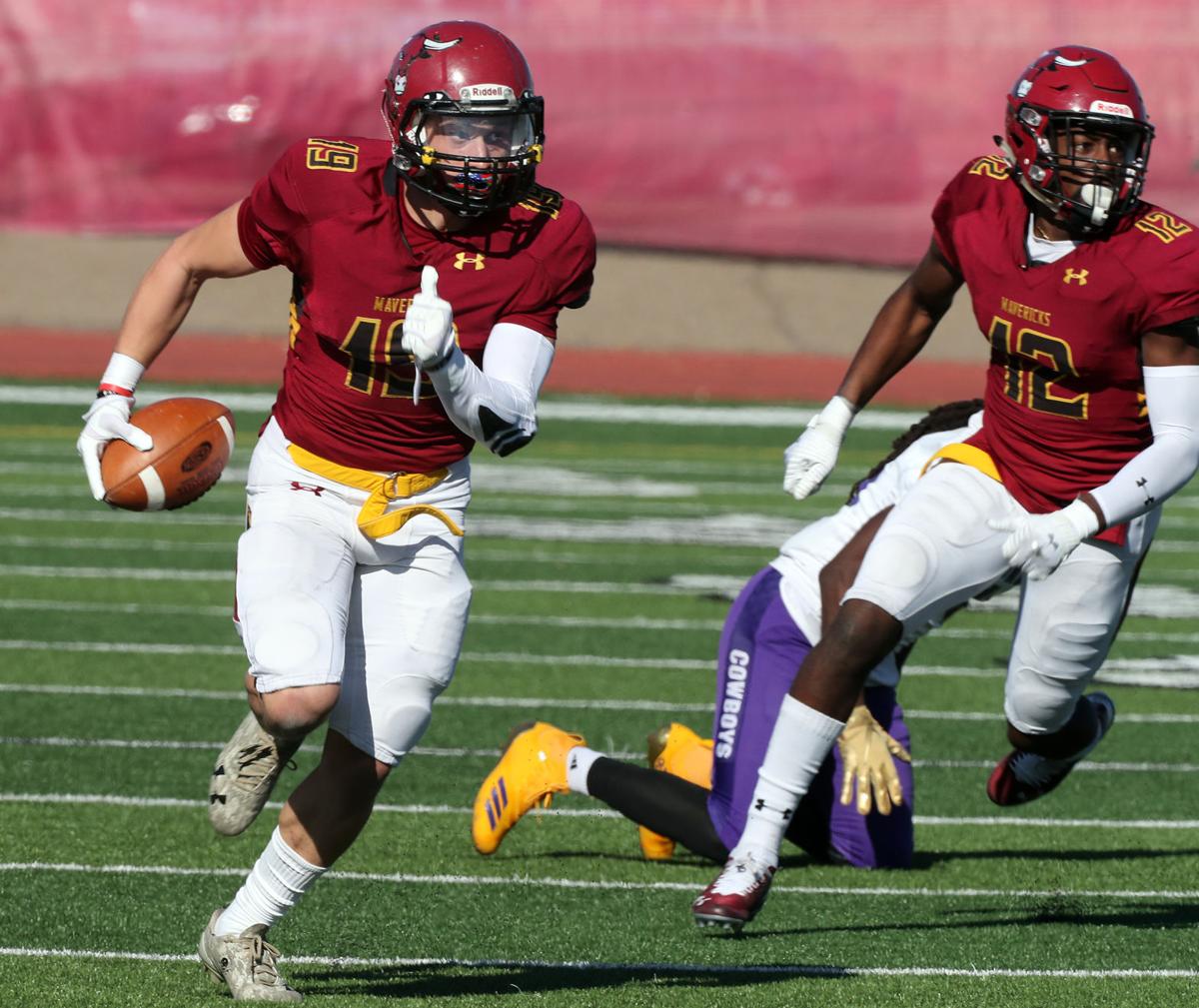 Colorado Mesa's Nick Ciccio returns an interception 42 yards for a touchdown in the Mavs' 51-13 rout of New Mexico Highlands at Stocker Stadium on Nov. 16.

Colorado Mesa University safety Nick Ciccio was selected as a first-team All-American on Tuesday by the American Football Coaches Association. He picked off eight passes for the Mavericks, returning three for scores.

Colorado Mesa's Nick Ciccio returns an interception 42 yards for a touchdown in the Mavs' 51-13 rout of New Mexico Highlands at Stocker Stadium on Nov. 16.

Nick Ciccio earned a nickname this season — Pick Ciccio — for his ability to not only intercept passes as Colorado Mesa's starting safety, but to take them to the house.

Tuesday, Ciccio, a redshirt sophomore from Castle Pines, was rewarded for his stellar season by becoming a first-team All-American from the American Football Coaches Association.

"It's great, it's definitely a good step going forward, something I want to repeat the next couple of years," Ciccio said Tuesday. "It's definitely a great feeling and shows my hard work is kind of coming around."

Peter Anderson was an All-American after the 2018 season, and Ciccio's is the 14th All-America award the Mavericks have received from the AFCA.

Ciccio played as a freshman in 2017, then missed last season with grade issues. A renewed commitment to his studies and practicing with the scout team last year helped him learn more about the game, and he showed just how hungry he was to play this past fall.

He intercepted eight passes, returning three for touchdowns. The interceptions were tied for first among Super Region IV players, and his 0.7 interceptions per game was fourth in the nation.

He made 60 tackles and defended 22 passes, which ranked second in all of Division II.

Ciccio had two interceptions in three separate games, and credits film study and meetings along with that year on the scout team in helping him refine how to read quarterbacks.

"I think what I learned was reading more of his eyes and also more of his drop-backs," Ciccio said. "If it's a three-step, if it's a five-step, it'll give away more routes, and also reading his eyes and where his shoulders are looking. That kind of worked more into that this season."

It allowed him to jump routes, especially on swing passes to the outside, although he also wrestled away a couple of passes by leaping with the receiver.

"I've gotten a little more comfortable and (am becoming) a student of the game," Ciccio said. "It's crazy, but it does (pay off to study film)."

The Mavericks' secondary was new this season — none of the four regular starters played last season. Devante Loggins redshirted after transferring, Darian Turner was out with a knee injury, and the Mavs' other corner after the first couple of weeks was freshman Justin White, who was the RMAC special teams player of the year.

Ciccio and White were the only Colorado Mesa players to make the RMAC all-conference first team.

Only Turner is graduating, so Ciccio is excited to see what 2020 will bring. Damar'ren Mitchell, D'Angelo Lindsey and Patrick Vigil, all of whom played big roles in 2018 but were out for one reason or another this fall, are expected to return next season.

Naijiel Hale, who started at cornerback but was injured early in the season, is back on campus after needing to return to California for personal reasons, keeping up with his classes online.

"I know we've got some guys returning, too, and that will make us even more solid, but we've got three returners that had really great seasons and that's definitely something to build on," Ciccio said. "It's motivating that we all have a big opportunity here to have a really big season."

The one question mark is who will be running the program since Russ Martin and the majority of the coaching staff will be replaced.

Offensive coordinator Riley Newcomer was retained and is in charge of keeping the program running until a new head coach is hired, with part-time assistants Mike Barela and Brian Blechen also retained. Those three are coordinating the recruiting process and the offseason conditioning.

Ciccio said the onus is on the players to make sure they're in the weight room with strength coach Ryan Swope and finishing the semester strong in the classroom the next two weeks.

"That's part of the biggest challenge right now, just staying motivated," Ciccio said. "I know it's kind of hard without the coaches. That's something I want to do personally, is kind of take more of that leadership role and help the guys through this time and help us all come together. I think that's our goal now."