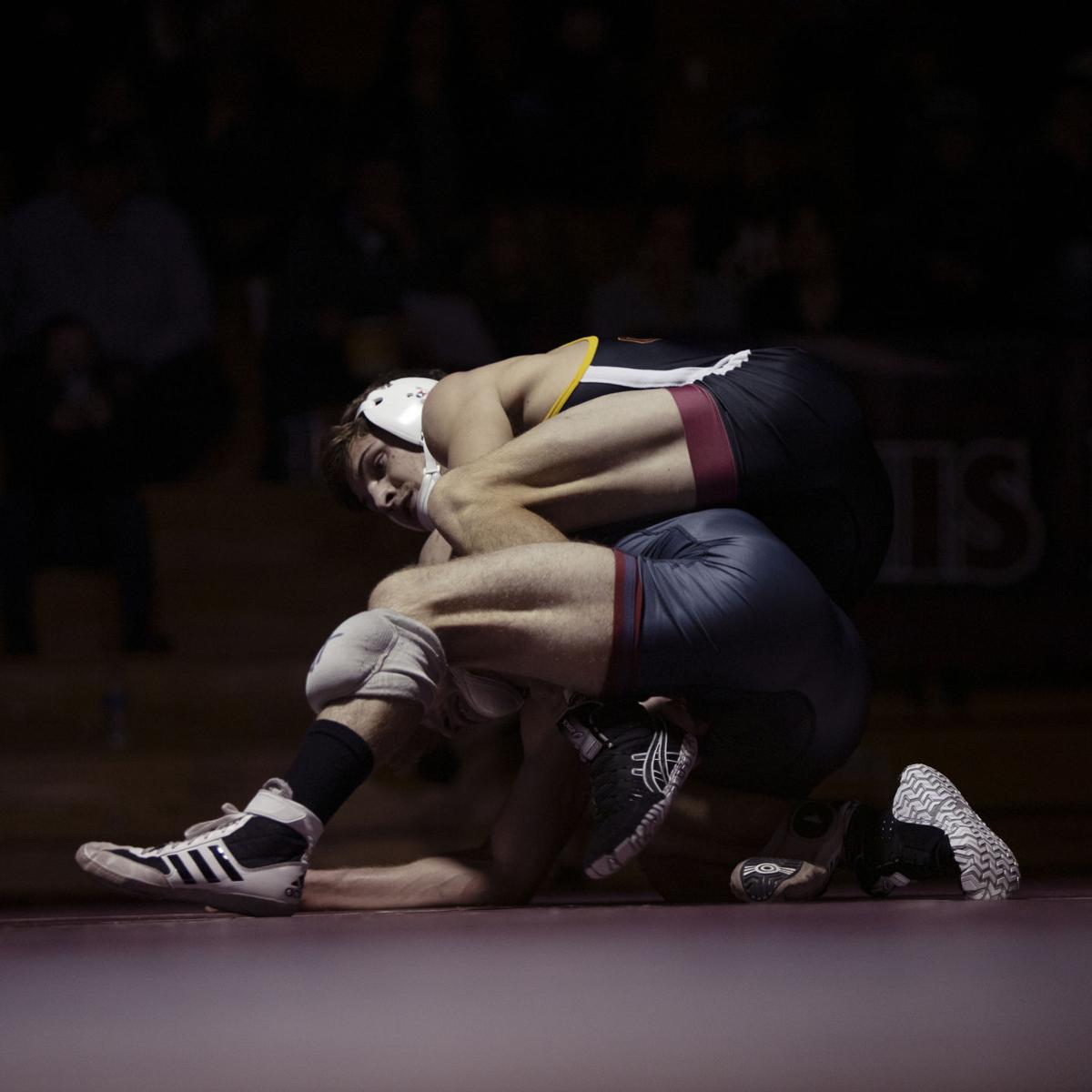 Colorado Mesa's Collin Metzgar controls Chadron State's Tate Stoddard on Saturday night in the 125-match. Metzgar pinned Stoddard in the second period to give the Mavs a boost at the beginning of their 32-17 win. 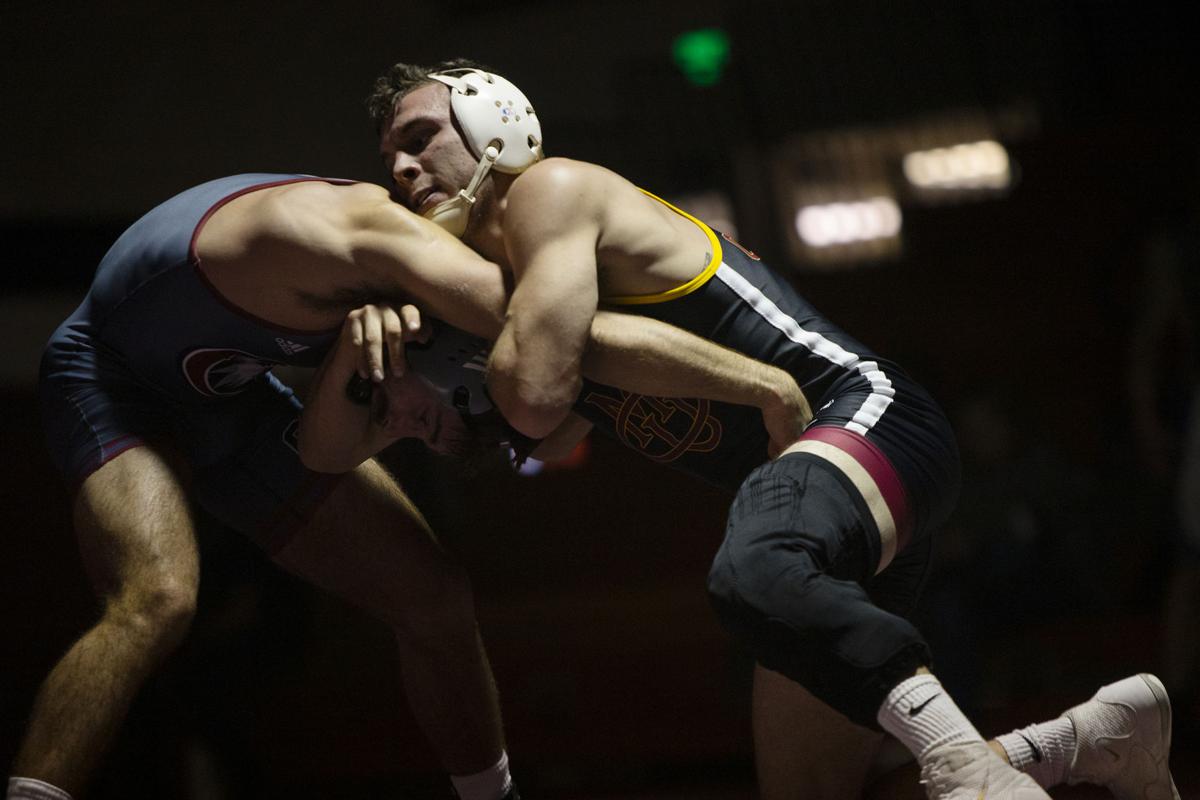 Colorado Mesa's Payton Tawater, right, gets the upper hand on Chadron State's Chase Clasen in the 149-pound match at Brownson Arena. Tawater pinned Clasen, the No. 5 wrestler in the nation, late in the third period.

Colorado Mesa's Collin Metzgar controls Chadron State's Tate Stoddard on Saturday night in the 125-match. Metzgar pinned Stoddard in the second period to give the Mavs a boost at the beginning of their 32-17 win.

Colorado Mesa's Payton Tawater, right, gets the upper hand on Chadron State's Chase Clasen in the 149-pound match at Brownson Arena. Tawater pinned Clasen, the No. 5 wrestler in the nation, late in the third period.

As the first man up, Collin Metzgar knew he had to set the tone Saturday night for the Colorado Mesa wrestling team.

The junior transfer from Northeastern Junior College turned Tate Stoddard for a four-point nearfall in the second period of the 125-pound match, then turned him again and refused to let Stodden bridge out, getting the pin with 1:03 left in the second.

That jump-started the Mavericks to a 32-17 win over Chadron State, which was tied for No. 24 in the preseason rankings, in the first RMAC dual of the season at Brownson Arena.

"It's a little nerve-wracking being the first one up," Metzgar said. "I always feel a little bit of nerves before, but once I step out on that line they go away.

"I felt real good after weighing in, got a little food in me. In the match, I'd say after I was on top, I felt good and felt I could turn him."

CMU coach Chuck Pipher liked how Metzgar got the Mavericks going, and after the Eagles tied the dual 6-6, the Mavs got back-to-back pins from Daniel Van Hoose and Payton Tawater to take control.

"That's what we've needed there," he said of his 125-pounder. "He gets himself kind of in some weird predicaments and all of a sudden he's coming out on top.

"Daniel was working that kid. When a guy comes in upper body on Daniel, he's going to go for a ride, but the difference is, Daniel didn't go for it. He wrestled first and waited for that guy to come and as soon as he did, he launched him."

Van Hoose threw Caleb Haskell to his back early in the second period and held on as Haskell worked furiously to scoot out of the ring, getting the pin with 1:24 left in the period.

Tawater, wrestling for the first time since tearing ligaments in his left knee early last season, is No. 10 in the preseason rankings at 157 pounds.

He had no idea he was facing the No. 5-ranked 149-pounder, Chase Clasen, who wrestled up one weight class. Clasen won the Super Region 4 title at 149 pounds last season.

"Never looked at it," Tawater said of the lineup sheet, which included rankings.

"Obviously he's a good wrestler and he knows what he's doing. I was just finding my spot. I know I'm dangerous, so it was all about finding that area where I could use that danger a little bit. I found it late in the second period and was able to finish it."

After the two were scoreless for nearly two periods, they locked up, each controlling the other's legs until Tawater freed himself enough to get control, turning Clasen with 10 seconds left in the second period and getting the pin with only three seconds to spare.

Seth Latham came up with a pin with 39 seconds to go in the second period at 174 pounds, using a pair of first-period takedowns, then turning Gavin Eason early in the second. An arm bar got Eason on his back again, and Latham used his upper-body strength to get the pin.

Nolan Krone clinched the team dual with a 16-1 technical fall at 184 pounds, but the Mavs weren't finished.

Donnie Negus took on Wade French, ranked No. 10 at 197 pounds and the defending Super Region 4 champion. Negus claimed the biggest win of his career, adding to his 2-0 lead with a third-period takedown for a 4-0 victory.

The Mavs' win over Chadron State was an early statement from a team that was picked to finish sixth in the conference.

"This is a top-notch team," Tawater said. "You look at the scoreboard, almost every one of our wins was bonus points."

Keeney, who went 4-0, was the only champion for the Mavericks, but eight others placed in the open, which drew 120 wrestlers. Pat Romero was fourth at 184 pounds and Dillon Ryan was fourth at 285 pounds.

Four Mavericks who wrestled unattached placed. Kash Anderson was the runner-up at 197 pounds, losing 6-0 to Tucker Tomlinson of Western Wyoming in the finals. Sebastian Peterson (125) and Taj Van der Linde (285) was fifth, reaching the semifinals before losing. Daniel Magana (141) was sixth, also losing in the semifinals.

Jackson, a freshman, finished in 1 hour, 9.26 minutes and was the fastest on the 20-kilometer bike portion of the sprint triathlon, 36 minutes, 17 seconds. Athletes opened with a 750-meter swim and wrapped up the day with a 5K run.