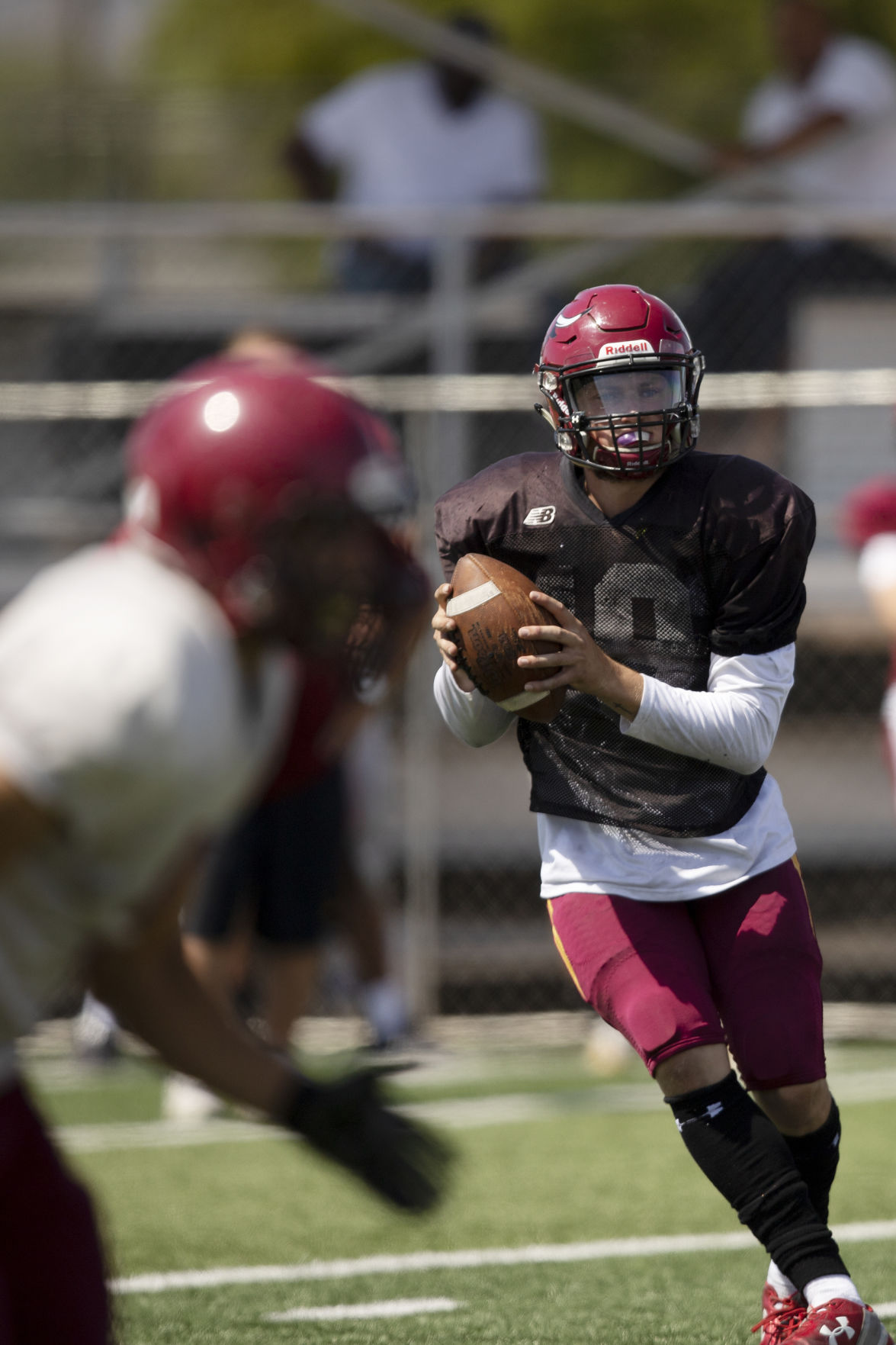 Left photo by CHRISTOPHER TOMLINSON; Right photo by McKENZIE LANGE/The Daily Sentinel Wide receiver Peter Anderson, left, quarterback Rope Ruel, right, and safety Darian Turner, bottom left, are all seniors and will be playing their final game for Colorado Mesa on Saturday against New Mexico Highlands at Stocker Stadium. All have had varying degrees of success for the Mavs. 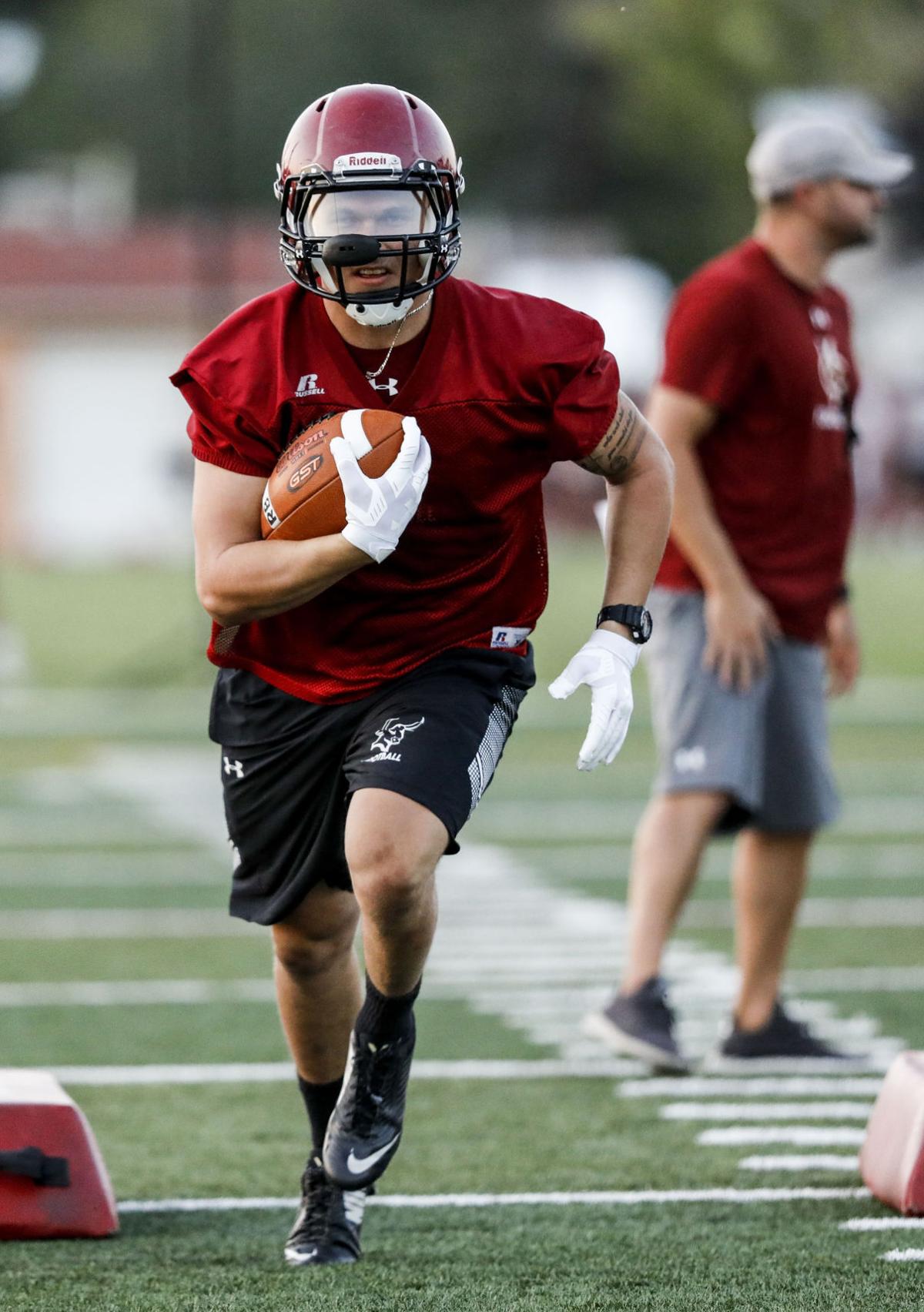 Daily Sentinel File Photo Isaac Maestas was slated to work as a running back for Colorado Mesa in 2018 before being moved to linebacker. This season the Palisade High School graduate will be running the ball, beginning the season as the Mavs' starter in the backfield.

Left photo by CHRISTOPHER TOMLINSON; Right photo by McKENZIE LANGE/The Daily Sentinel Wide receiver Peter Anderson, left, quarterback Rope Ruel, right, and safety Darian Turner, bottom left, are all seniors and will be playing their final game for Colorado Mesa on Saturday against New Mexico Highlands at Stocker Stadium. All have had varying degrees of success for the Mavs.

Daily Sentinel File Photo Isaac Maestas was slated to work as a running back for Colorado Mesa in 2018 before being moved to linebacker. This season the Palisade High School graduate will be running the ball, beginning the season as the Mavs' starter in the backfield.

Saturday, the fifth-year senior will have the signals sent to him as Colorado Mesa's starting quarterback for the season opener at South Dakota Mines.

Ruel has studied the Mavericks' spread run-pass option scheme since he was a redshirt in 2015.

He and sophomores Aaron Howard and Hayden Bollinger have been jockeying for spots on the depth chart since last season ended. It's likely all three will get snaps Saturday, but Martin opted for experience to start — Ruel has played in 13 games, with one start last season against CSU-Pueblo when Salum was injured. Howard played in five games last season; Bollinger has not been on the active roster until now.

"I feel like us three in that (meeting) room right now, any one of us have the skills and ability to lead this team," Ruel said. "I appreciate Coach calling on me for this game and I plan on going out there and giving it all I've got."

Saturday's game in Rapid City, South Dakota, could be one for the books when it comes to how many quarterbacks play.

The Hardrockers are also searching for Jake Sullivan's replacement at quarterback, with five QBs in the running during fall camp. Sophomore Spencer Zur is slated to start after throwing one pass all of last season. He edged out junior Thomas Creese, who played in all 11 games last season, but attempted only 12 passes, completing nine.

The competition to start has made all three of CMU's quarterbacks better.

"It's been good," Ruel said. "It's keeping us sharp mentally and physically, challenging each other each and every day. But it's also brought us close together as a group. We have each other's backs. I know they'll be rooting for me just as I'd be rooting for them if they get out there."

During practice, the quarterbacks — who are now being coached by Rubalcaba and Martin — are constantly talking to one another about what they're seeing from the defense.

"We're not going to have as many called quarterback runs, but we know there are going to be several of them that the quarterbacks can check to because of different fronts and different things they see," Martin said.

"The other thing is, last year we eliminated a little bit of the passing game because we knew Eystin was an outstanding runner. We were going to use that within our system, but we've added in a few more things in the passing game because Rope and all three of our guys have the ability to throw the football downfield and we've got some receivers who can go get the ball.

"You'll see maybe a little more aerial attack at times, or threatening people, but at the same time you'll see us still looking to run the football."

That's where sophomore Isaac Maestas comes in. The Palisade High School product started last season as a running back, but was moved to linebacker to shore up some thin spots there. He's now the Mavs' starting running back, and will continue as their punter.

"There's certain fits that defenses do, or certain shades they run, or try to hide things with the safeties and I see that even more now on offense. When Coach talks about it on film, it's even more evident and it'll help in a game."

Jesse Rodriguez, a redshirt freshman, and sophomore Trey Windham will also get carries.

With CMU's explosive receivers, Peter Anderson, on the NCAA's early list of Harlon Hill Trophy candidates, KJ Sapp and Bradley Toussaint, stretching defenses, Maestas knows at some point, it will spring the running back for big gains, and Ruel knows his job is one of game management.

"The guys around me definitely make my job a lot easier," he said. "Just trying not to do too much and get the ball into their hands and let them make the plays."

The new faces aren't only on offense — the entire defensive secondary is new. Safeties Darian Turner (injury) and Nick Ciccio (eligibility) missed last season, but had outstanding seasons in 2017.

Transfers Devante Loggins and Naijiel Hale will start at cornerback. Loggins sat out last season after transferring, and Hale came in last spring after playing at the University of Washington and Montana State.

"We have the best secondary we've had since I've been here," Martin said. "Those two as corners are as good as any in the conference that I've seen.

"I think we've got some really good things going. Are those names people have heard recently? No, but I think by the time we get done with the season they certainly will."

"We're still going to be a very explosive offense, but man, there are a lot of new faces in there, but that's OK." — Russ Martin