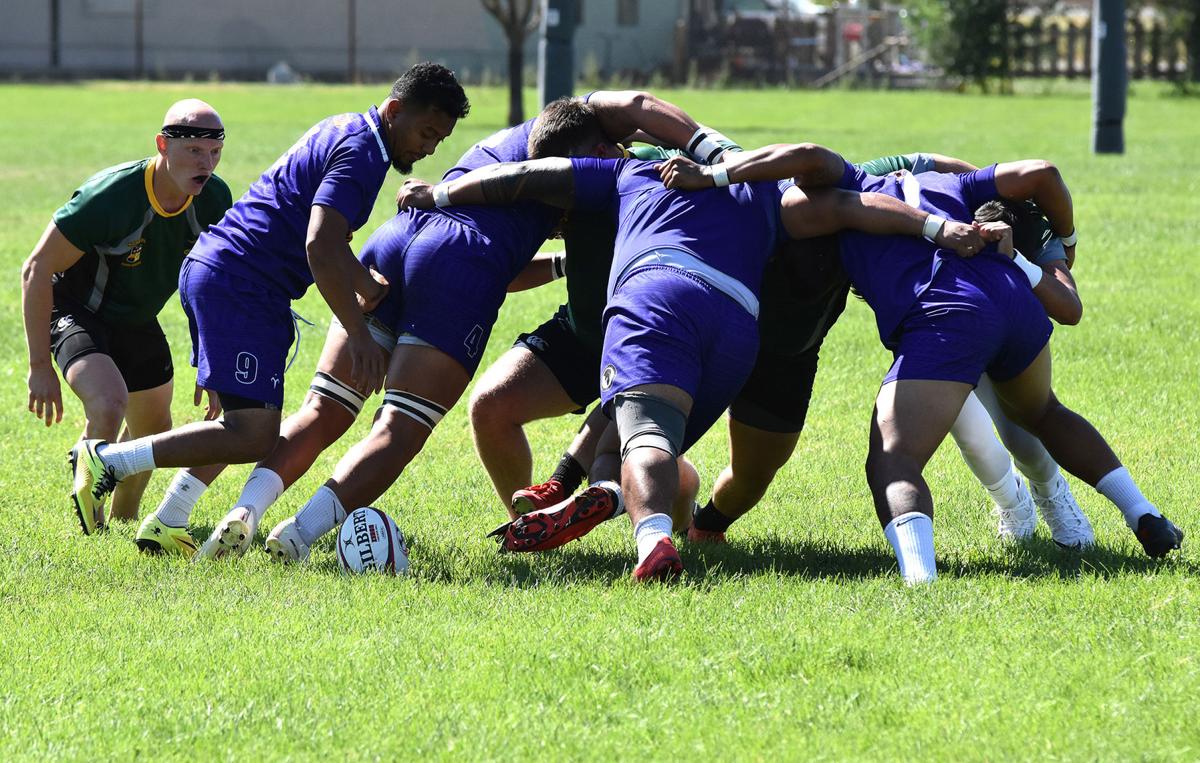 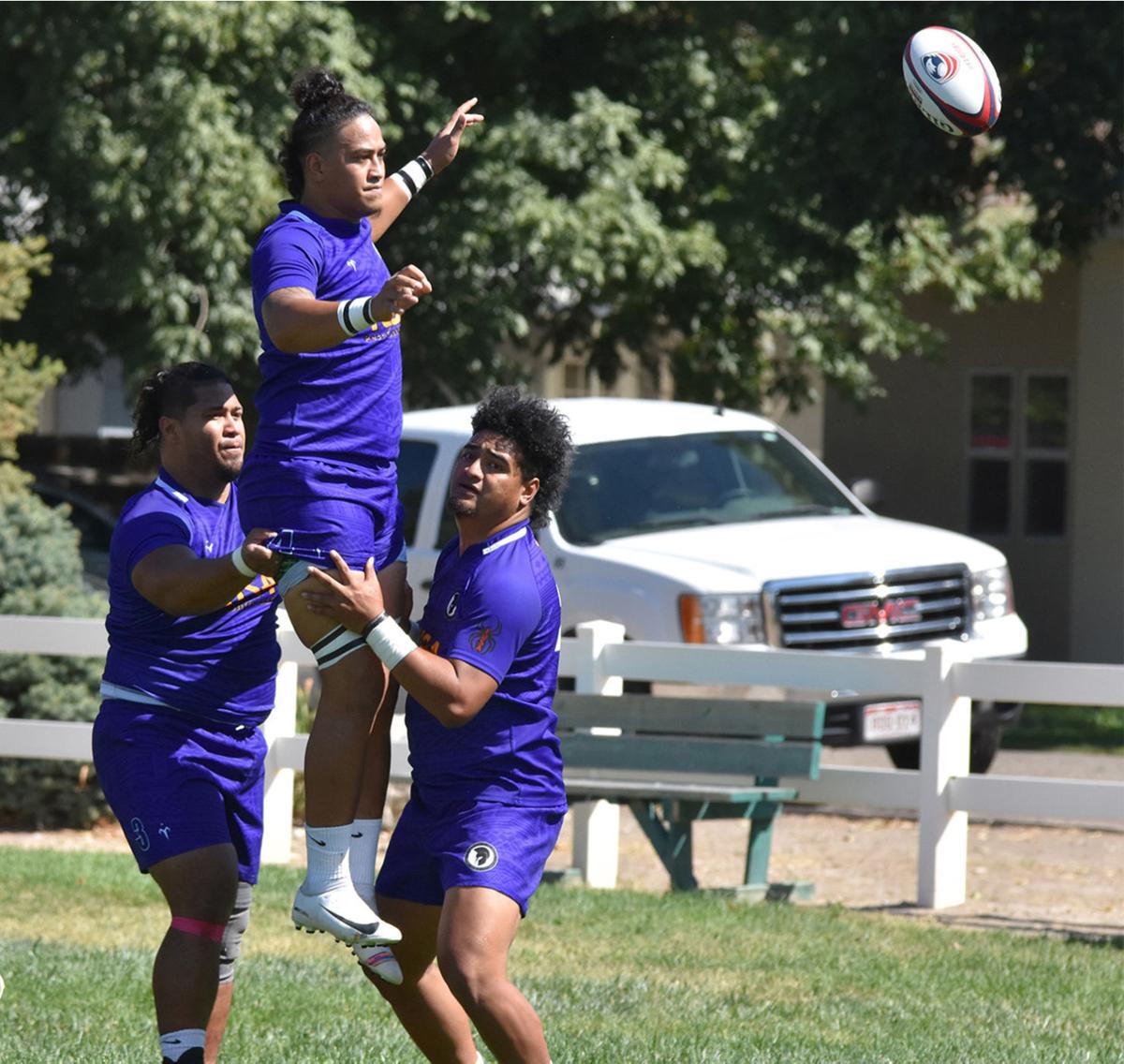 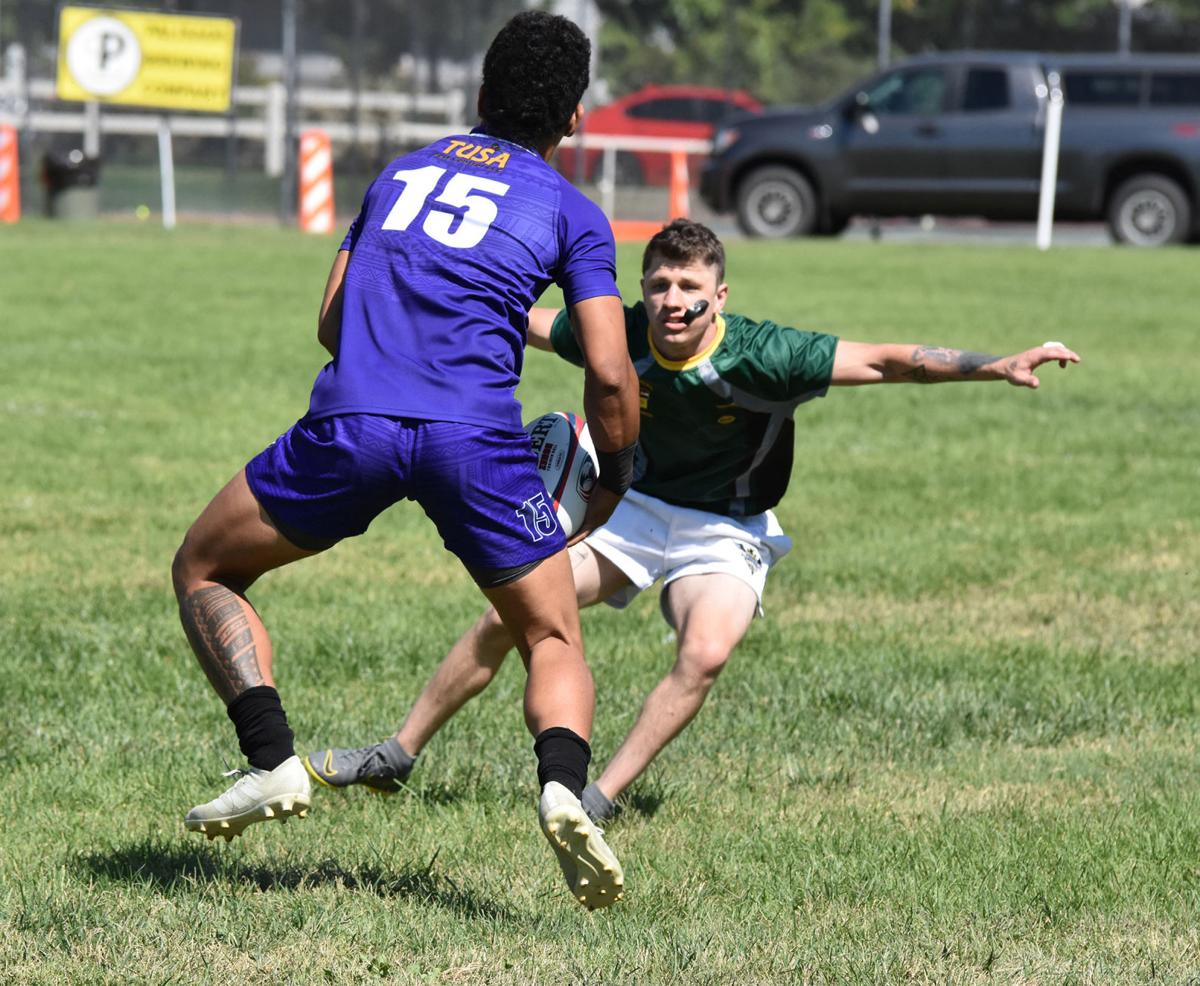 Kaden Hummel of the Grand Junction Griffins zeroes in on a player from the Salt Lake City Gladiators during the Peach Town Throw Down rugby 7s tournament at the Peach Bowl in Palisade on Sept. 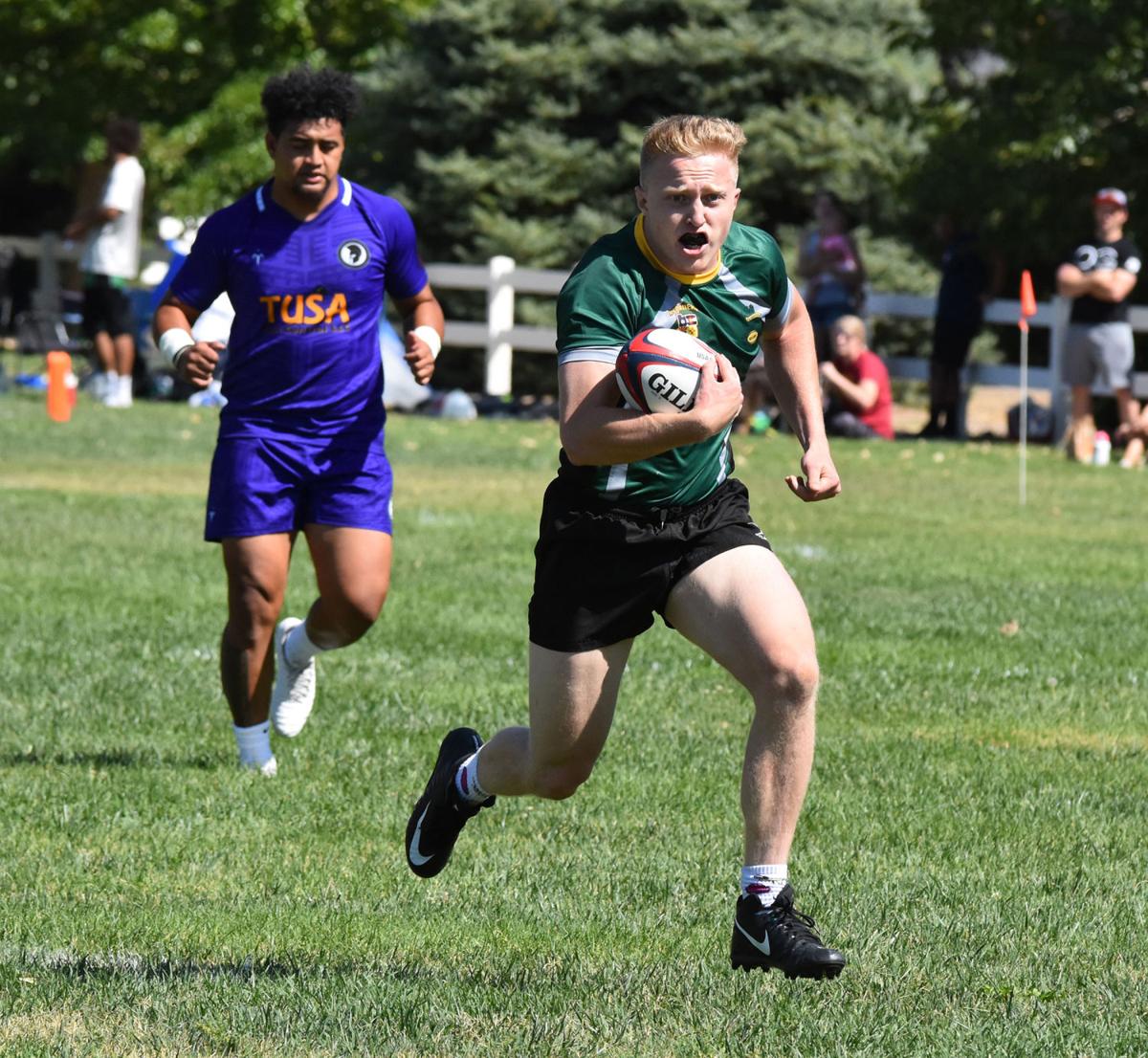 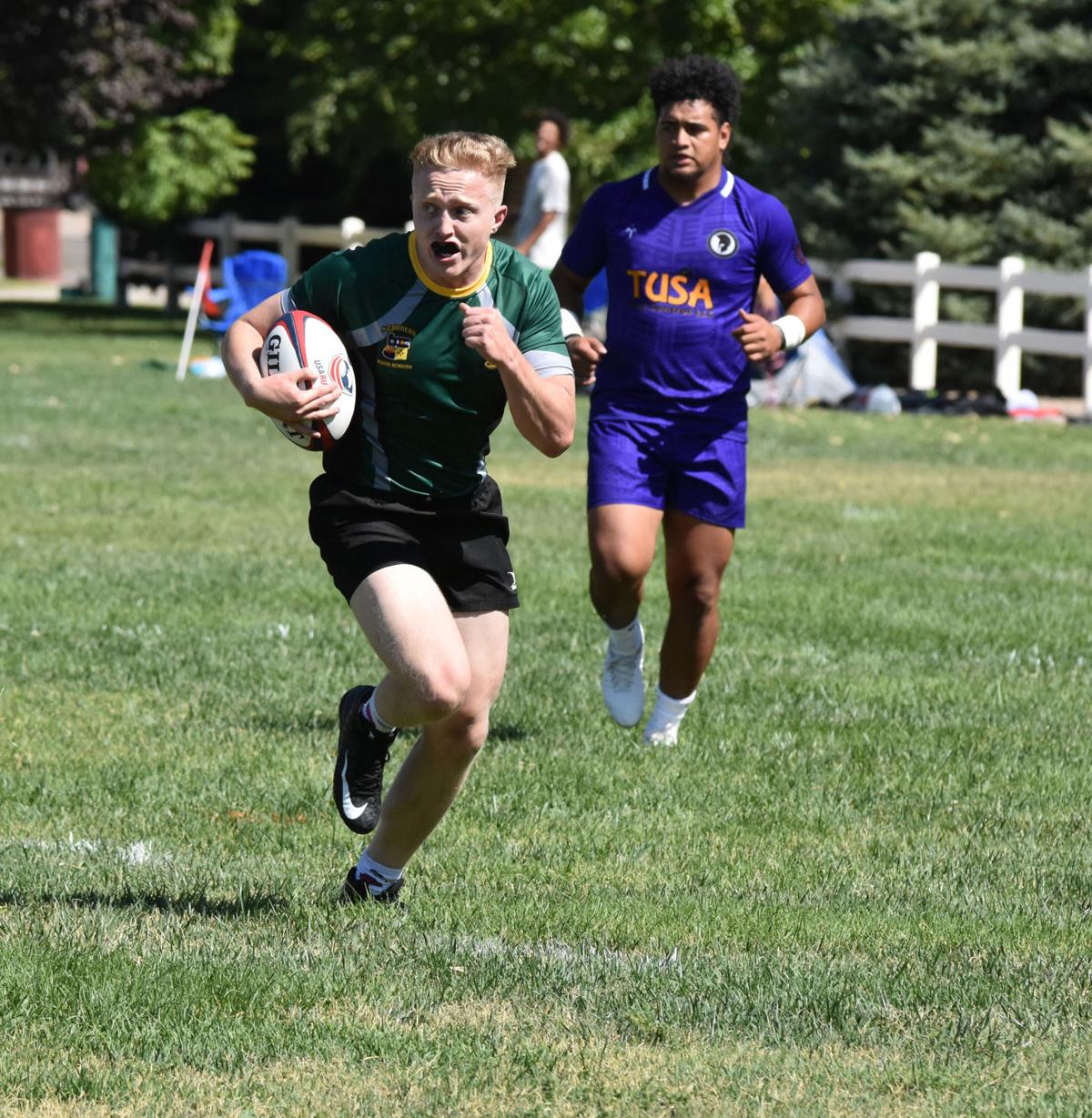 Grand Junction Griffins player Parker Jelouchan sprints away from a Salt Lake City Gladiators player during the Peach Town Throw Down rugby 7s tournament at the Peach Bowl in Palisade on Sept. 7.

Kaden Hummel of the Grand Junction Griffins zeroes in on a player from the Salt Lake City Gladiators during the Peach Town Throw Down rugby 7s tournament at the Peach Bowl in Palisade on Sept.

Grand Junction Griffins player Parker Jelouchan sprints away from a Salt Lake City Gladiators player during the Peach Town Throw Down rugby 7s tournament at the Peach Bowl in Palisade on Sept. 7.

Joshua Pendergrass is a Johnny Appleseed of rugby, planting seedlings of the sport alongside the Grand Valley's bountiful peach trees.

Pendergrass, who has played and officiated rugby all over the world, knows rugby players don't just grow on trees in the United States.

Rather, he said, rugby development in a place like the Grand Valley requires cultivating players across ages and gender with an emphasis on instruction.

Pendergrass, who has taken over the Grand Junction Griffins program, launched his one-scrum-at-a-time building prospectus last weekend by hosting the Peach Town Throw Down rugby 7s tournament at the Peach Bowl in Palisade.

"In light of the season we've had, we needed to wear the green (jerseys) again and get out there as a team," Pendergrass said, adding that the Griffins had only a limited summer schedule with several players supporting the Defiance Rugby Club in Glenwood Springs this year. "It was good to see our guys together again."

He said he also wanted to create a teaching tournament with experienced rugby players and teams to go against the host Griffins.

"Engagement. We needed (engagement) with players who've played all their lives … with a rugby culture," Pendergrass said. "My guys got to see some experienced rugby players. All day long, they would pull our players aside and offer advice, little tips on how to play, where to play. That was engagement, right there."

Although he originally hoped rugby clubs from New Mexico and the Front Range also would participate, Pendergrass said he was more than pleased with the Gladiators' contingent of 18 players. They fielded nearly three separate 7s teams for the round-robin exhibition tournament.

"We always love to teach new guys," said Lilo Vaai of the Gladiators. "We've been playing since we were little. We love it. This is a good opportunity to grow the sport."

Vaai said one of the Gladiators' team sponsors in Salt Lake City heard about the rugby event in Palisade.

He asked if the players would like to try the new tournament.

He said the Gladiators enjoy the camaraderie of travel and playing in weekend rugby events.

That creates a special bond, he said, adjusting the scrunchie on his stylish top-knot.

"We're all from different villages back in the islands. Rugby is what brings us together," he said. "Then, outside of the game, we're always there for each other … just like (on the field)."

Slipping seamlessly between English and his native language, Vaai playfully teased a teammate who broke free for an unexpected try against the Griffins. The Gladiators' prop (think right guard) lumbered for the score while his teammates howled with approval.

"It's fun to travel with a group of guys you call your brothers," Vaai said as another teammate tended to a large boiling pot — the start of Samoan-style green bananas. "They (bananas) keep us going all day."

He said the Gladiators appreciate an event like the Peach Town tournament because as they teach aspects of the game to their less experienced opponents, they help their own game.

"We grew up playing the game, but we know there's always something new to learn," Vaai said.

When the Samoans were talking in Palisade, the Griffins were listening.

"You get to see why they are such well-rounded (rugby) players," said Kyle Duran of the Griffins. "They've been doing this since they could crawl."

He said the Samoan players were generous in their advice.

"They're able to give us some of the little tricks of the game," he said, specifically citing positioning on the field — a key element to rugby 7s.

Rugby's 7s, in the American lexicon, has been compared to full-court 3-on-3 basketball.

Duran, a former quarterback at Colorado Mesa University, made the conversion to rugby when he stepped away from college football.

"I had a friend who played rugby (at CMU), and he got me to come out," said Duran, a prep all-state football player at Basha High School in Chandler, Arizona. "I was fortunate I found a love for it."

He said the athleticism of rugby enticed him.

"For me, that moving and running … that part came naturally. But as a (former) quarterback, tackling people was the biggest transition. I had to learn how to tackle properly," Duran said. "And the way it's taught is safe. It's controlled … instead of throwing yourself around out there."

He said he also likes the international aspect of rugby.

"It's the culture of rugby … the camaraderie, the brotherhood," Duran said. "I would suggest rugby as an alternative to any sport, really. Not just football. But soccer, too. We've even had swimmers out."

Pendergrass, the CEO and founder of the 4 Corners Rugby organization, said hosting the Samoans was special to him because of the time he spent in Polynesia.

The former Marine had grown up in a rugby family. His mother and father both played at the University of Kansas where his mom was an All-American.

Pendergrass played in the Bay Area in high school and returned to California after the Marine Corps.

With his obvious love of the game, a rugby friend and teammate told him, "You need to go to New Zealand."

"My first job … was coaching Little League baseball," he recalled with a chuckle. He eventually was part of the coaching staff that sent New Zealand's first team to the Little League World Series.

And he played and coached rugby.

He also eventually played and coached in Australia, Ireland and Samoa.

He climbed the coaching certification tree and recently became a top-level coach/administrator through the international training program.

As such, Pendergrass now is certified to train other rugby coaches.

The high school-age teams will compete in the Salt Lake City-area prep rugby circuit, he said. Training will start in October with games starting in January.

His intent, also, is to develop the senior Griffins with a full club schedule for next spring and summer along with the second Peach Town rugby tournament, to be known next year as the Peach Town Scrum Down.