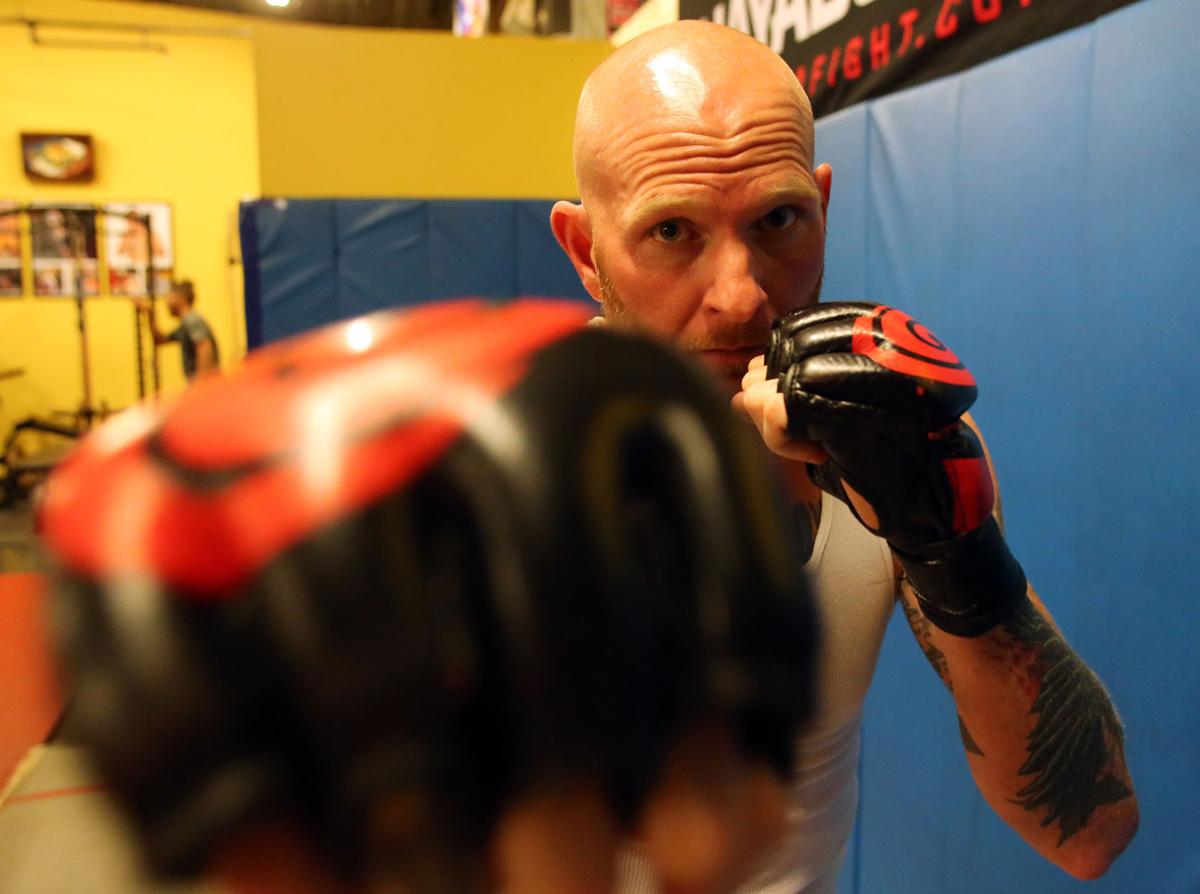 Jonathan Phillips will be one of the fighters on Saturday's Cage Wars card at Las Colonias Amphitheater. Phillips, who trains at Golden Fights gym, will be taking on Brad Mantell in a 165-pound amateur bout. CHRISTOPHER TOMLINSON/ The Daily Sentinel 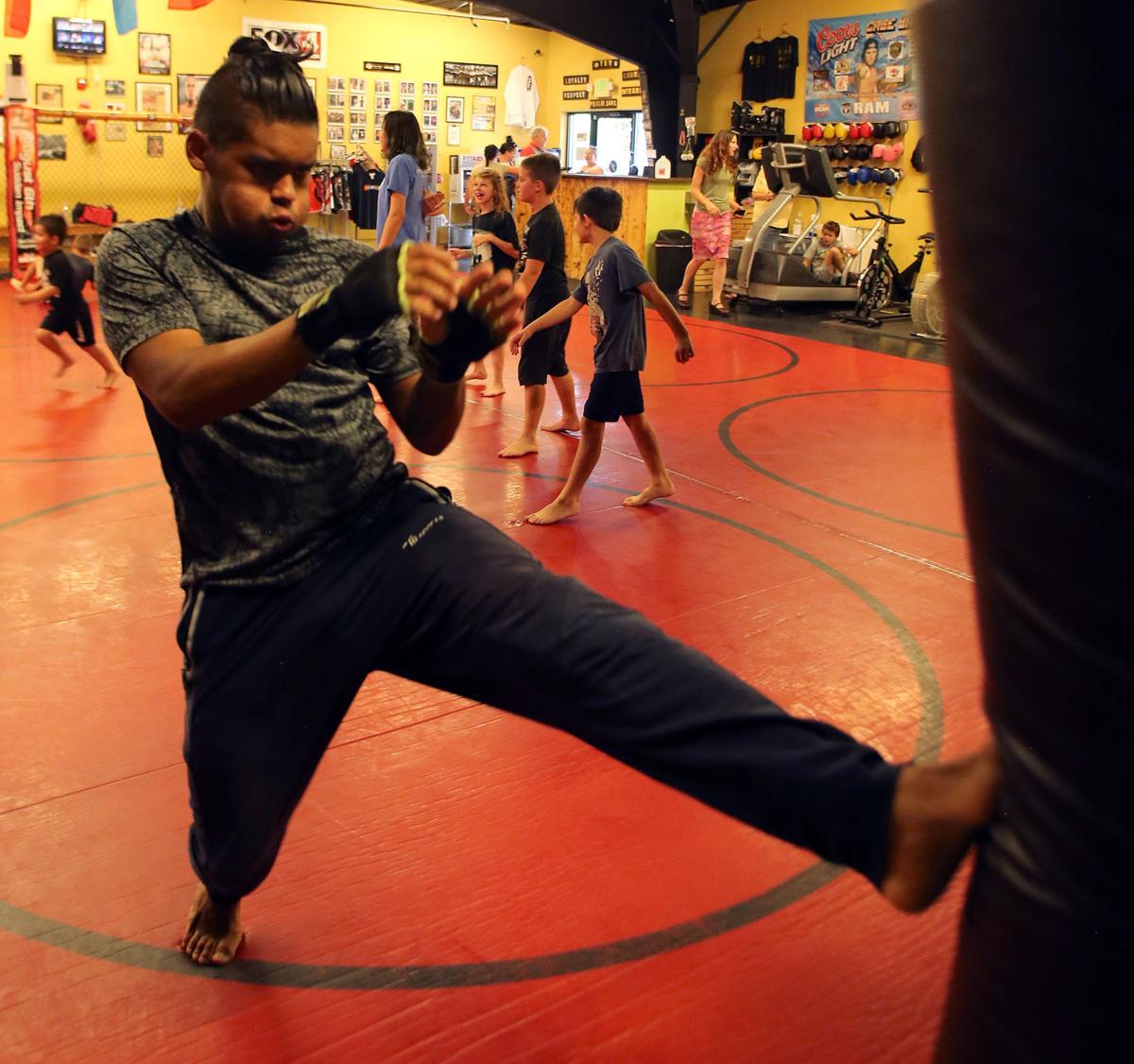 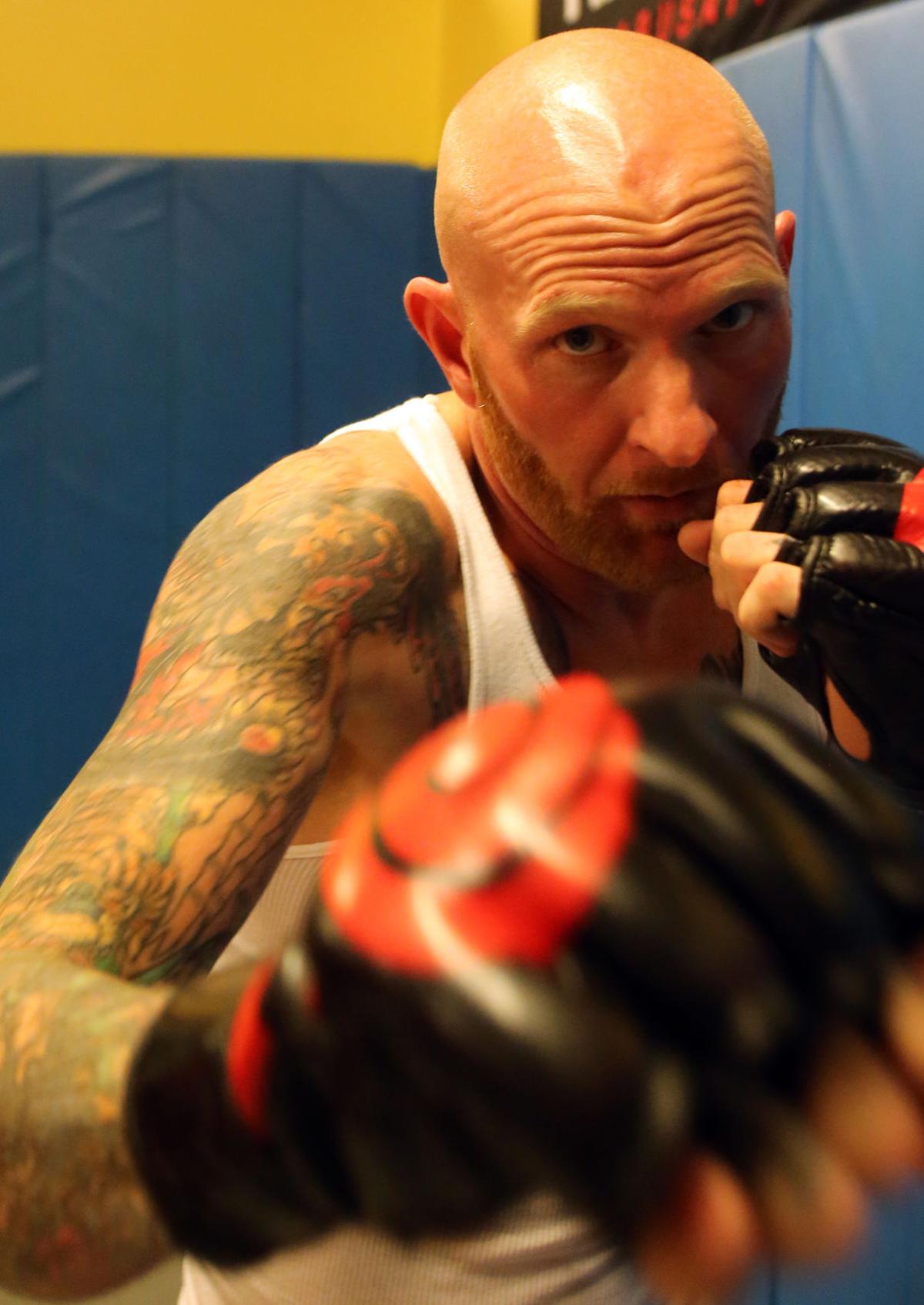 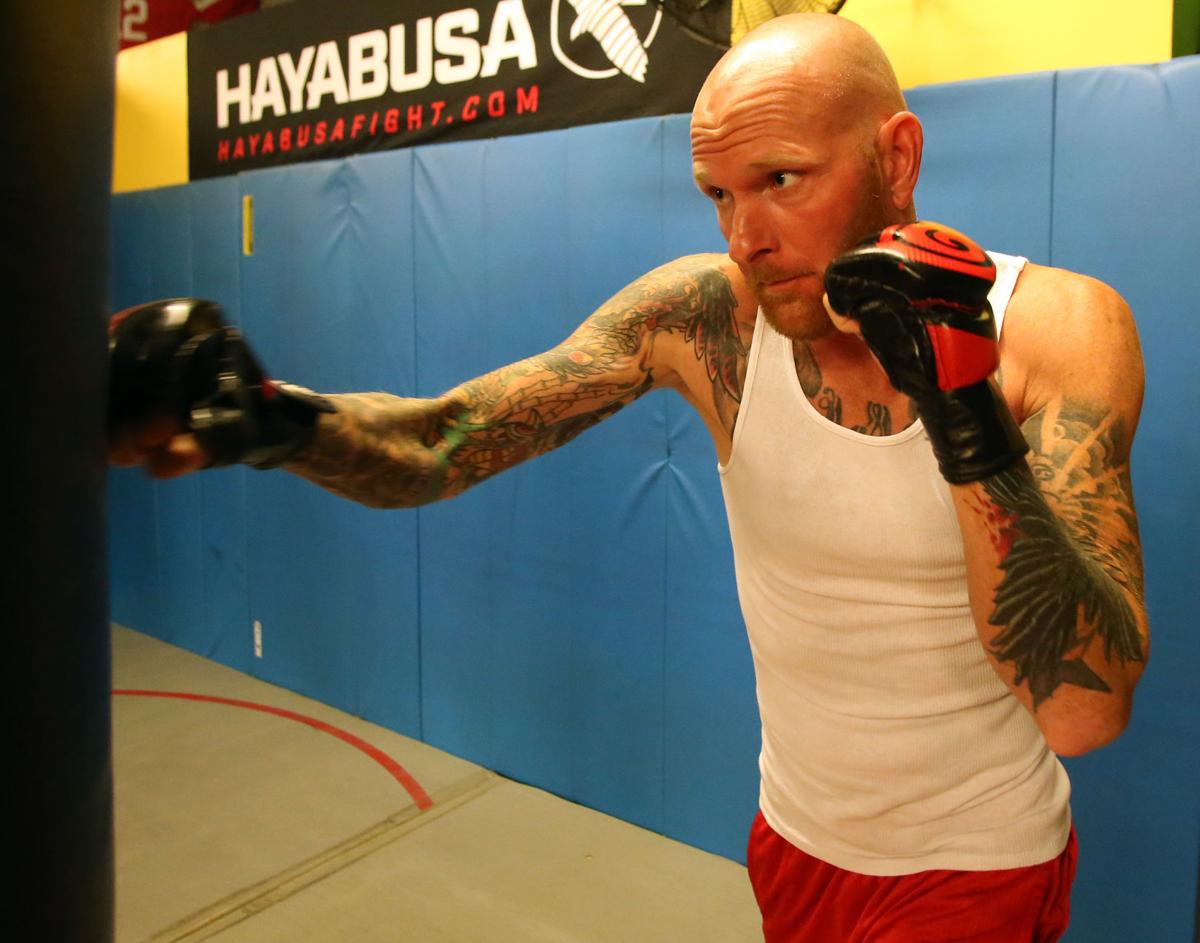 Johnathan Phillips working out at the Golden Fights gym in preparation for his MMA fight. 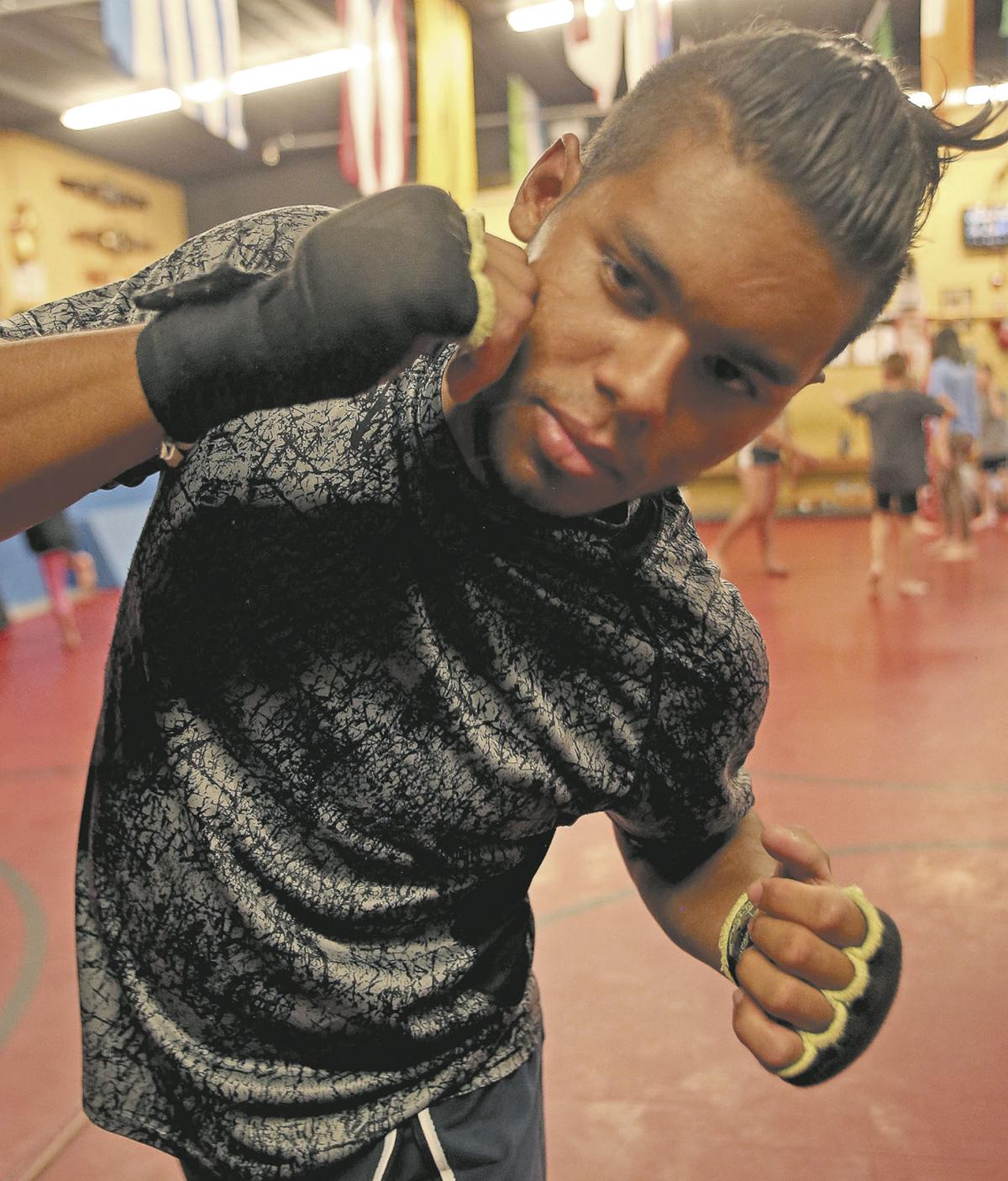 Angel Diaz working out at the Golden Fights gym in preparation for his MMA fight.

Jonathan Phillips will be one of the fighters on Saturday's Cage Wars card at Las Colonias Amphitheater. Phillips, who trains at Golden Fights gym, will be taking on Brad Mantell in a 165-pound amateur bout. CHRISTOPHER TOMLINSON/ The Daily Sentinel

Johnathan Phillips working out at the Golden Fights gym in preparation for his MMA fight.

Angel Diaz working out at the Golden Fights gym in preparation for his MMA fight.

The local mixed martial arts fights out of Golden Fights are joining King of the Cage, which produces videos for broadcast. Golden Fights reached an agreement last Friday to have its MMA events shown on Amazon Prime streaming service and also on MavTV.

Saturday night's "Future Legends of MMA" event at Las Colonias Amphitheater is the first event King of the Cage will produce.

"I recently moved out here, I have family here, and I've seen their signs and posters," Steve Inman of King of the Cage said. "When I moved out here I hit them up, 'Are you looking to get your fighters on national TV and get them some exposure?' ''

It didn't take long for Steve and Andrew Yates of Golden Fights to jump on board. Saturday's event will be filmed for release next month, and will be on Amazon Prime before that, Inman said, but dates haven't been finalized. Fans interested can go to King of the Cage's Facebook page for schedule information.

This is the first MMA event at the amphitheater, and Andrew Yates isn't quite sure what to expect, other than some good bouts.

"It's hard to do outdoor events," he said. "Las Colonias isn't really made for this kind of event, but we're going to run with it. A lot of other shows have been done (at similar venues). The show's going to be great no matter what."

The fighters won't come out to flames shooting into the air like usual because of fire danger in the area, but Yates said that's not a problem. There will still be plenty of energy and hype for the fighters.

The card hasn't been finalized, but a half-dozen amateur bouts are set, along with three professional fights.

Darren Polou Nakanelua and Rudy Garcia, both from Las Vegas, are the main pro event, and Yates is looking forward to a couple of amateur bouts, Donovan Logan and Alex Jones at 135 pounds, and Roger Atchley and Caleb Lawson at 150. He figures the Logan-Jones winner will soon turn pro.

"Both of them have bright futures," he said. Atchley is another Las Vegas fighter and will go up against Lawson, who is from Grand Junction and is a member of the National Guard.

Inman said he doesn't anticipate any logistical issues for his film crew.

"This is just another day at the office," he said. "I've got a good video crew hitting it every weekend. We've been in big venues, small venues; we've been at a baseball field. We've been doing this since 1998, probably one of the longest running independent organizations without getting bought out by 'the man.' "

Fighters will weigh in Friday night at Grand Junction Harley Davidson and then get themselves ready for their closeups.

"What's cool about King of the Cage jumping on is Cage Wars was a local fight," Andrew Yates said. "Now we're a national fight. People will get better publicity and get their names out there."

Card subject to change without notice; more bouts to be added