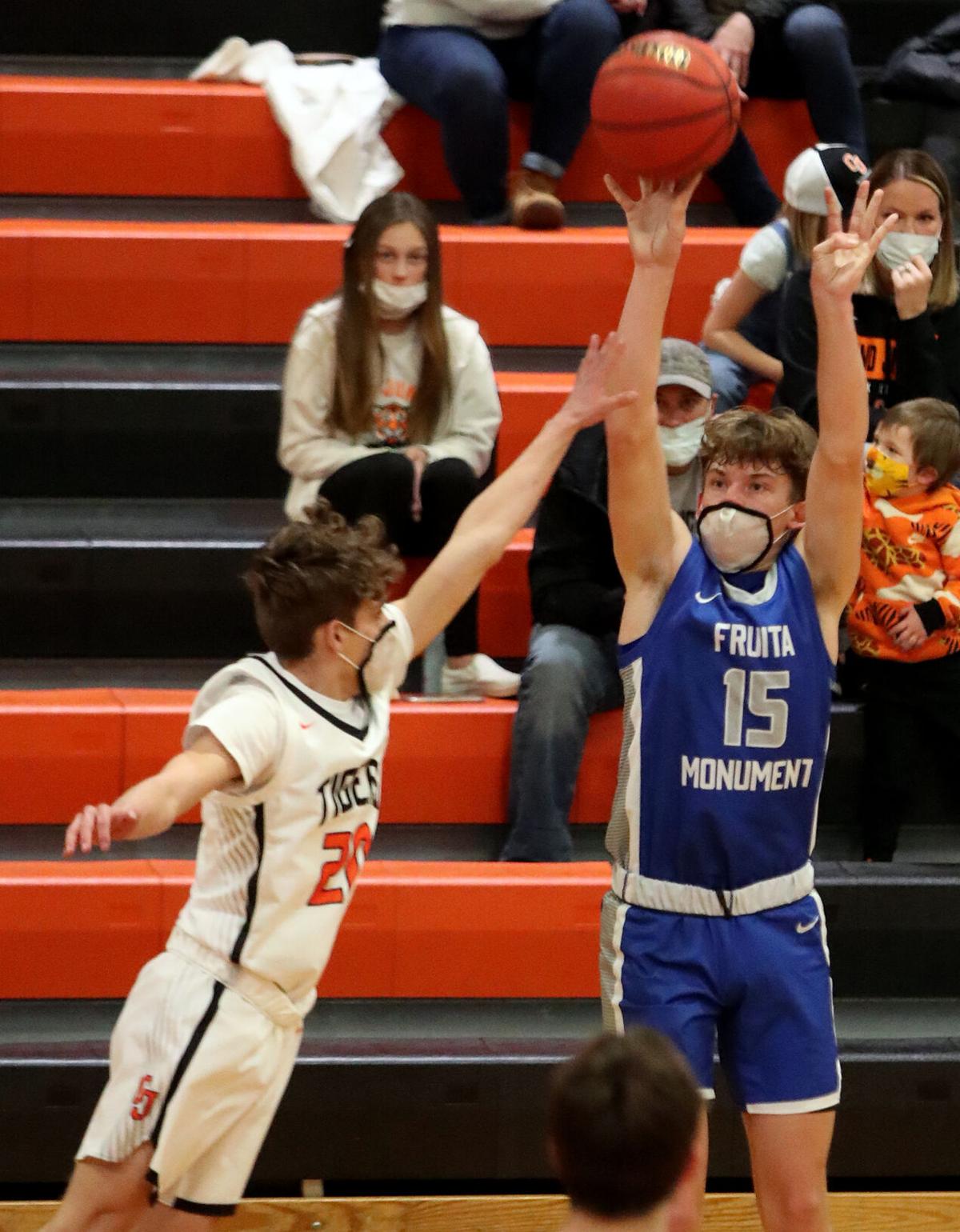 Fruita Monument’s Joel Lively gets a shot off Friday night as Grand Junction’s Ethan Teeter defends in the Wildcats’ 66-48 victory. Lively made two 3-pointers and scored eight points for Fruita. 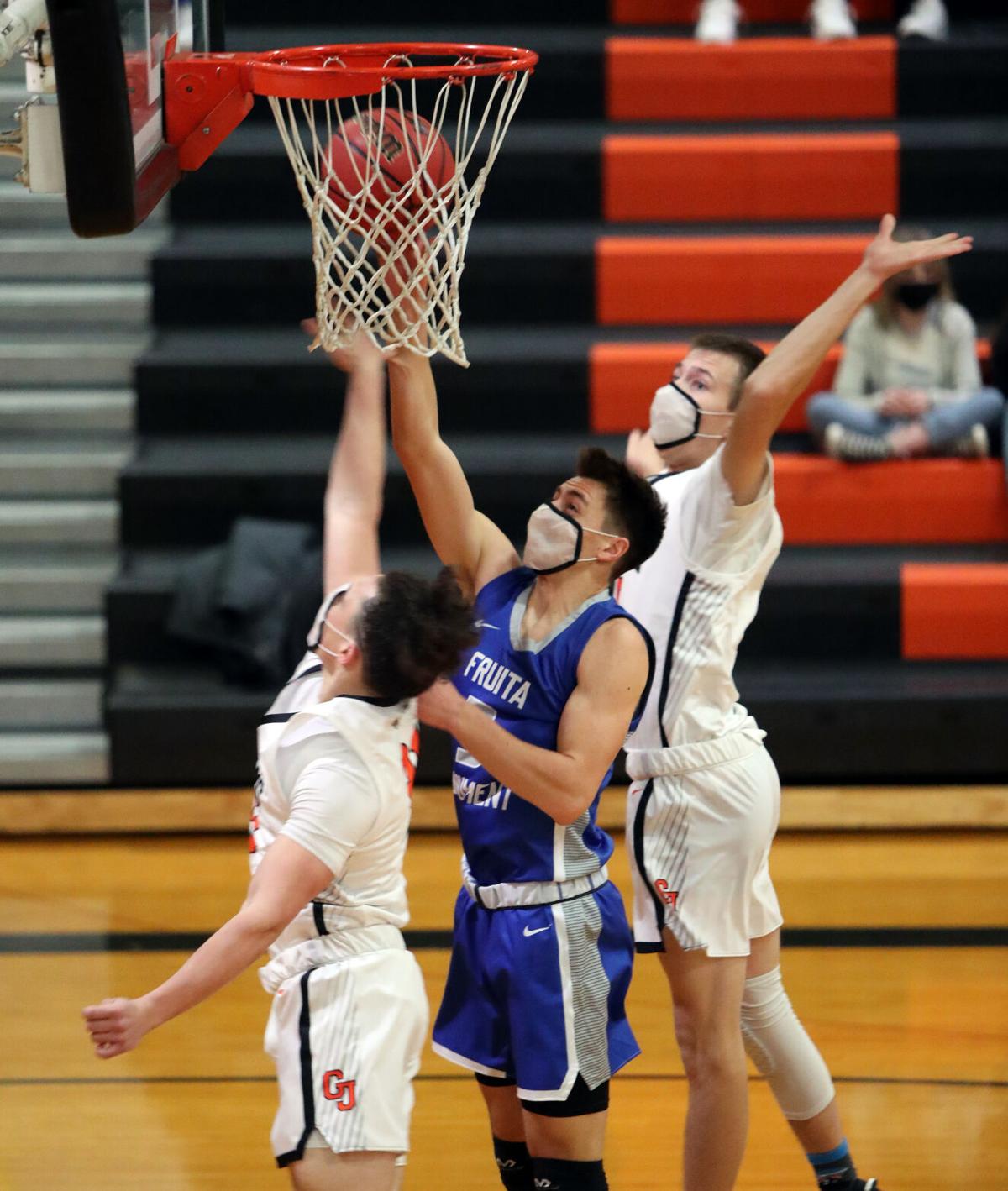 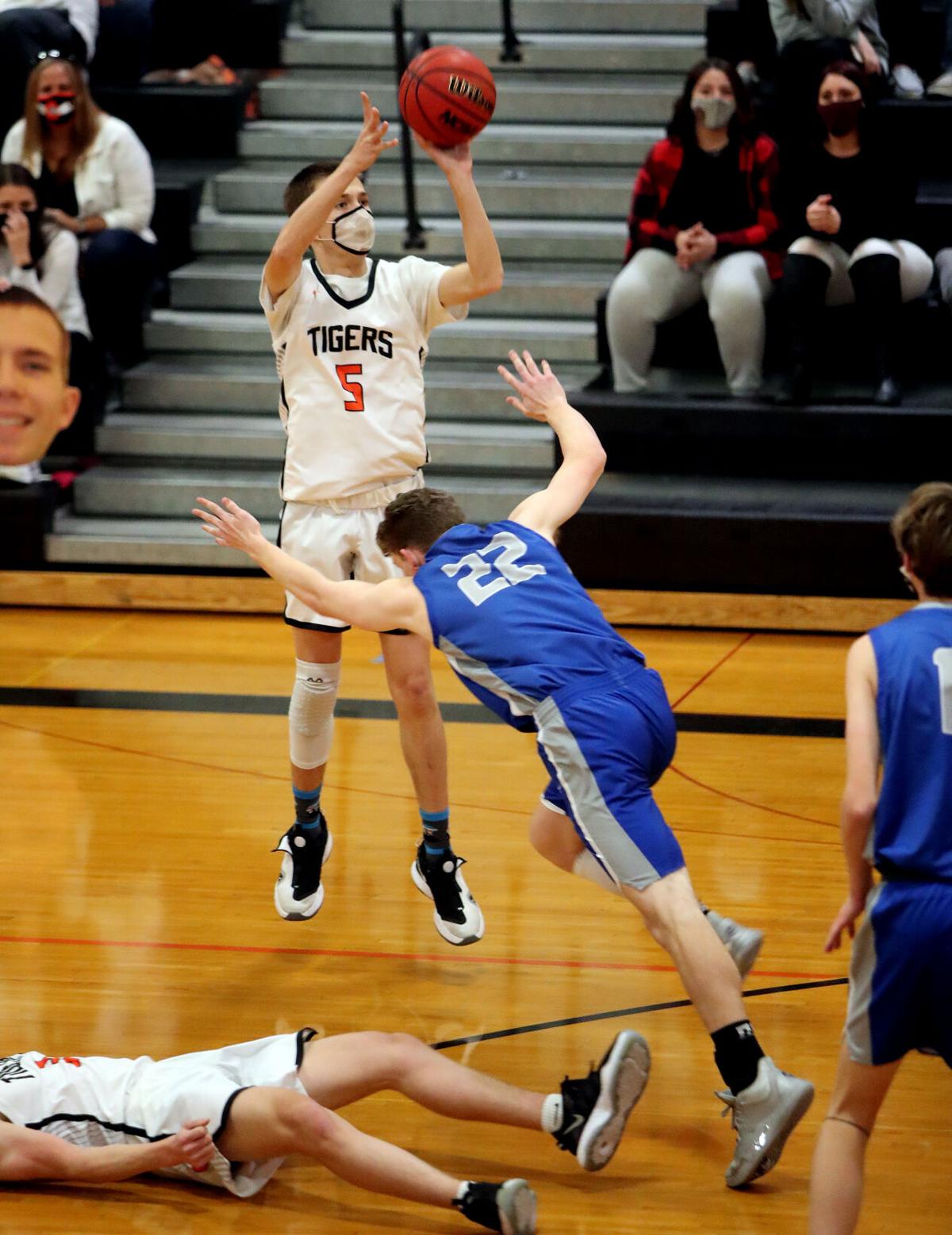 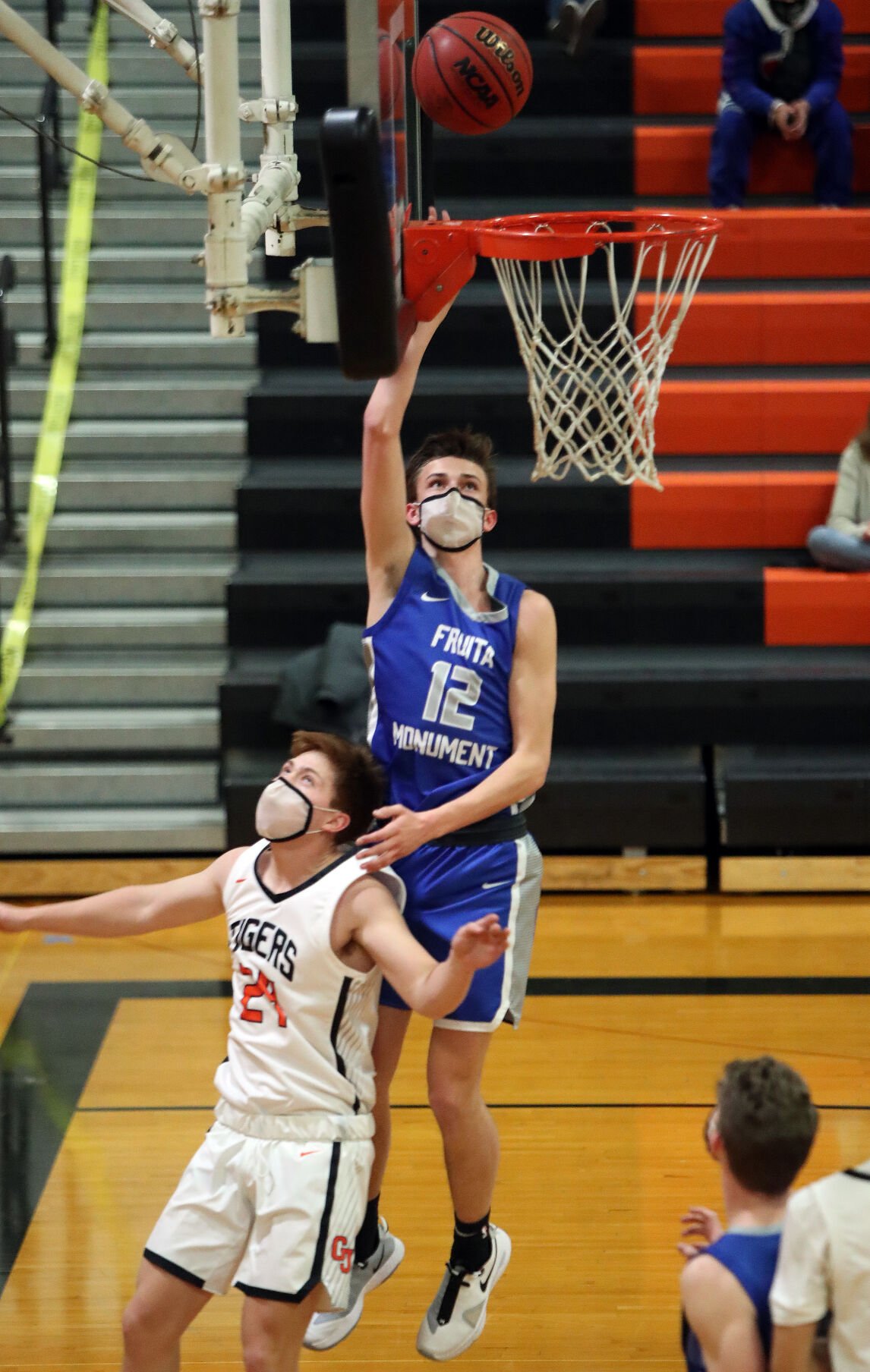 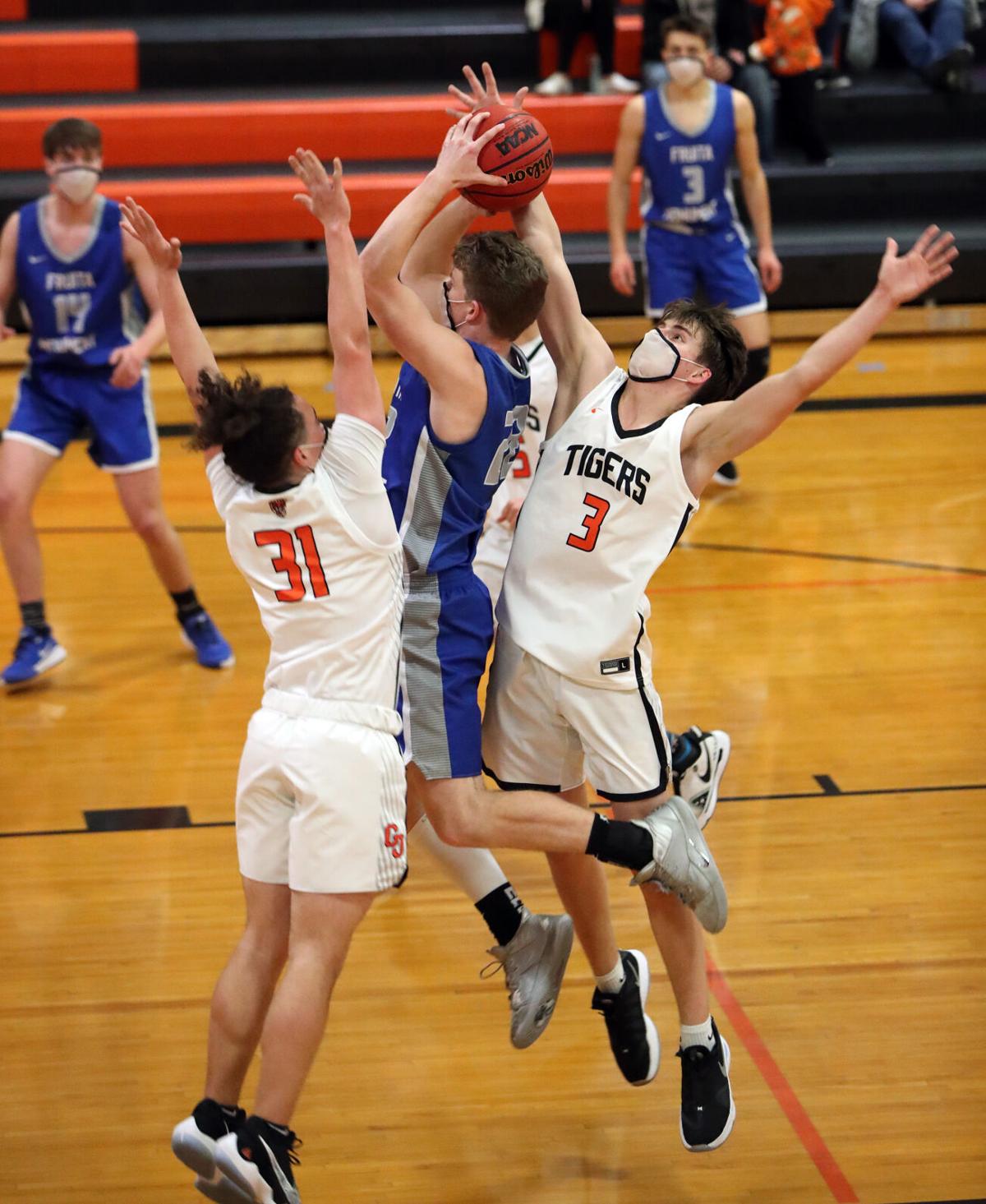 Fruita Monument’s Joel Lively gets a shot off Friday night as Grand Junction’s Ethan Teeter defends in the Wildcats’ 66-48 victory. Lively made two 3-pointers and scored eight points for Fruita.

They set the tone with defense Friday night. Then the Fruita Monument Wildcats cranked up the offense in a 66-48 boys Southwestern League victory over Grand Junction.

“Defensively, I couldn’t have been more impressed with our first-half performance,” Fruita Monument coach Ryan Hayden said. “You know, we really do a good job playing help-side, protecting the rim. You’ve got to give credit to Junction, they did a really good job of attacking the rim and kind of got us confused on some of their misdirection sets and opened the bucket up for them (in the second half). They made buckets, and I think we answered a lot of those buckets.”

Grand Junction took a 5-2 lead in the first two minutes of the game, and that’s when the Wildcats (3-5, 1-3 SWL) got serious about defense. The Tigers (5-4, 2-2) didn’t score the rest of the first quarter and were shut out in the second quarter until Dillon Chapman made a free throw with 1:40 to play in the half.

The Wildcats built a 24-10 halftime lead by deflecting and intercepting numerous passes, leading to points in transition.

When they didn’t score off turnovers, the Wildcats found open shooters, and, unlike earlier this season, those shooters knocked down 3-pointers.

Connor Laible and Joel Lively each made a pair of 3s and Skylar Johnson another after the Tigers started pressing to try to get back in the game.

The Wildcats passed through the press and kept the ball moving until somebody was open, either on the perimeter or on a drive toward the lane.

Down 33-19, Grand Junction made a run to pull within a dozen, but the 16-5 second-quarter drought was too much to overcome. Blaine Butler finished with 17 points for Grand Junction, hitting five 3-pointers, but Fruita’s balance was impressive.

“Our guys did a really good job having composure in that trap,” Hayden said. “I thought we did a pretty good job passing through that and it opened up an advantage for us.”

There’s no way for most teams to replicate in practice the pressure Fruita Monument puts on during a game. Grand Junction was the Wildcats’ latest victim in Fruita’s 33-16 victory.

Even when the Tigers did handle the pressure, they were hesitant to attack the basket because Fruita’s pressure doesn’t subside once you get the ball past midcourt.

With the Wildcats (7-1, 4-0 SWL) trapping the ballhandler, it forced Grand Junction (2-6, 2-2) into numerous errant passes. Some sailed out of bounds, others found their way into the Wildcats’ hands.

Neither team shot the ball well, with the Tigers going to a zone to limit dribble penetration, and neither team made a 3-point attempt the entire game. Lauren Hansen’s runner in the lane just before the horn sounded put Fruita up 16-5 at halftime, and the Wildcats extended that to 23-9 by the end of the third quarter.

Then it was time to run the clock, and the Wildcats kept possession for more than three minutes at the start of the fourth quarter, forcing the Tigers to foul. Tava Johnson came up with a steal and was fouled at the 4:36 mark of the quarter and made one free throw for the Tigers, but Fruita again worked the clock.

The Wildcats didn’t take a shot in the quarter until Kylie Wells, who led Fruita with nine points, got a backdoor layup with 4:12 to play for a 25-10 lead.

A game-by-game look at the Badgers' new football schedule