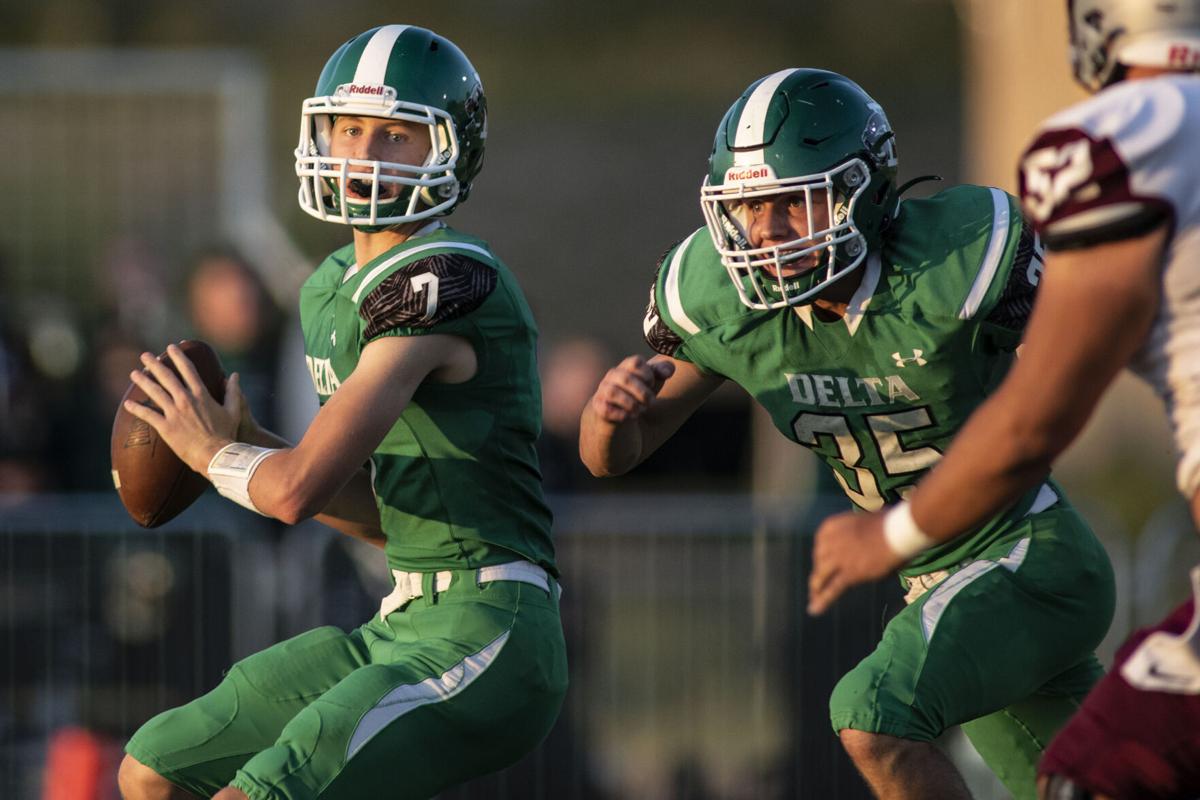 Photos by William Woody/Special to The Daily Sentinel

Delta High School quarterback Ty Reed, 7, looks downfield to pass as Timmy Horn, 35, comes across to block during last Friday’s game against Palisade. Reed was making his first varsity start with senior Nathan Scharnhorst sidelined with a broken foot. Reed, handing off to Horn, below, threw for 112 yards and one touchdown. 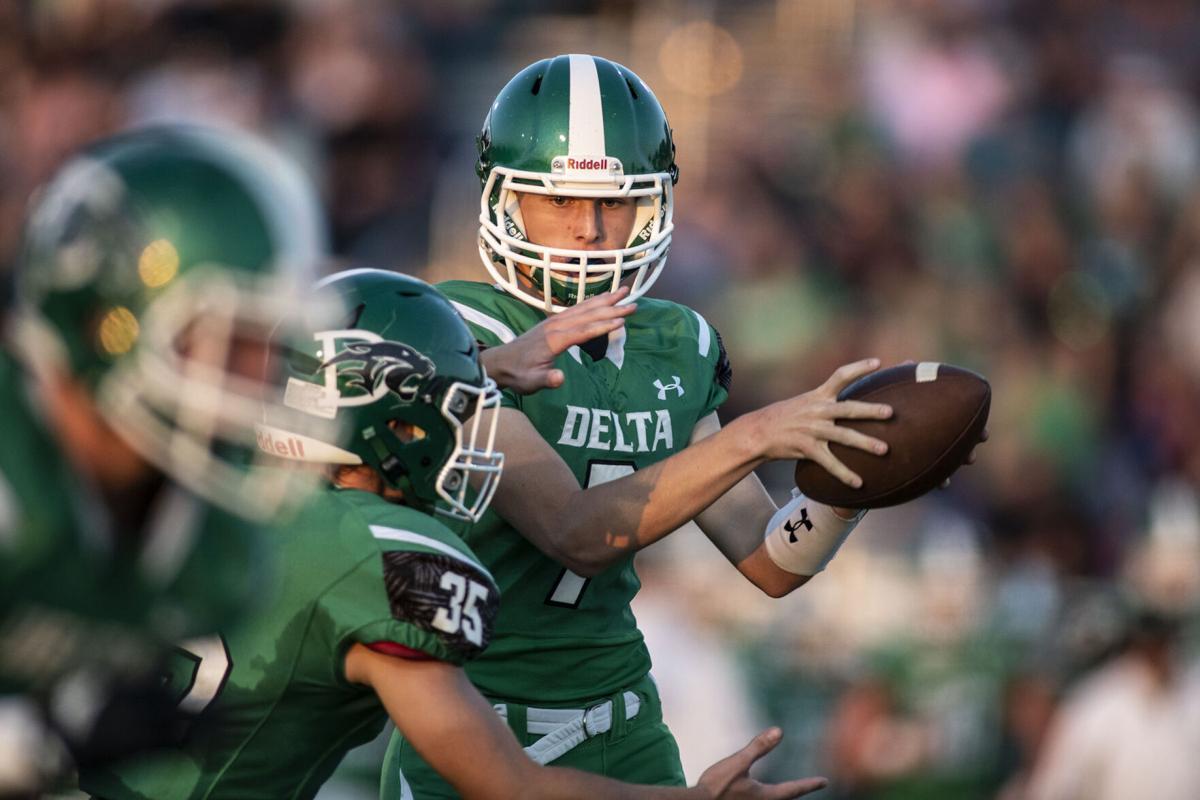 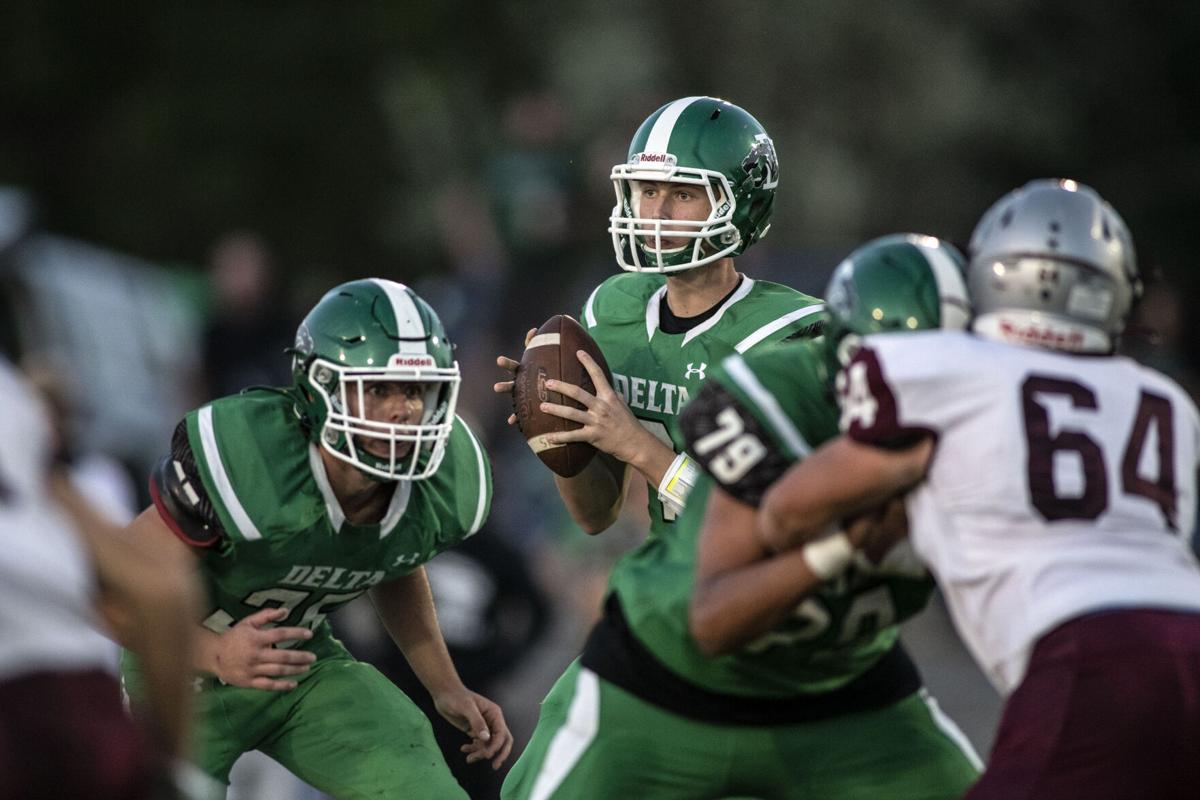 Photos by William Woody/Special to The Daily Sentinel

Delta High School quarterback Ty Reed, 7, looks downfield to pass as Timmy Horn, 35, comes across to block during last Friday’s game against Palisade. Reed was making his first varsity start with senior Nathan Scharnhorst sidelined with a broken foot. Reed, handing off to Horn, below, threw for 112 yards and one touchdown.

The bad news for the Delta High School football team is that its starting senior quarterback has been sidelined with a broken foot.

The good news is that the Panthers have been here before, and that their quarterback of the future is getting significant playing time now.

Last fall, Nolan Bynum’s Delta prep career ended when he tore the lateral collateral ligament in his left knee. Junior Nathan Scharnhorst took over under center and led the Panthers to the Class 2A semifinals.

In a 49-0 win over Salida in the second game of his senior season, Scharnhorst suffered a broken foot, leaving a hole at the most valuable spot in coach Ben Johnson’s offense. Johnson turned to the only quarterback on his team with game experience at the position, Ty Reed — even if that experience was as the junior varsity starter.

“It’s a really fun program to be a part of,” said Reed, a freshman. “It’s also different (from JV). I don’t really know how to explain it. It’s fun to be with all the varsity players because they help bring you up whenever you feel like you aren’t doing your best, and it shows.”

Reed’s completed one of his two passes for 7 yards against Salida and started his first varsity game last Friday, when the Panthers, then the No. 2 team in Class 2A, hosted Palisade, a top-10 squad in 3A.

In Monday’s rankings, the Panthers dropped to No. 6 in the state, with the Bulldogs receiving votes. Palisade dropped out of the Class 3A top 10, but is the top team receiving votes.

Although the visiting Bulldogs may have largely nullified any explosiveness the Delta offense possesses no matter who’s at quarterback, holding the Panthers to 181 total yards in a 28-10 win, the 6-foot-2-inch Reed showed glimpses of a bright future, especially early.

His first two passes went for a 10-yard gain and a 55-yard touchdown strike to senior Hunter Goff. He completed his first four passes for 72 yards.

He finished 7 for 16 for 112 yards, throwing two interceptions, although one of his picks was a third-down heave as far as he could throw it that was just as effective as an ensuing punt, if not more.

“A lot of times, you put a freshman back there and have a lot of dropped snaps and bad handoffs, and I thought he handled all that very well,” Johnson said. “I thought he threw the ball well, too, even though he had the two interceptions. A couple of the balls that he threw were really on-target. I thought he played very composed for a freshman.”

Reed’s first game might have come against the strongest defense he’ll face this season. Delta’s next three opponents — Montezuma-Cortez, Coal Ridge and Aspen — have a combined record of 2-4 before the Panthers (2-1) host currently unbeaten Basalt.

Reed will have his chances to learn how to maintain early momentum at the varsity level.

“Early on, he had pretty good passing, read the defense well, good, clean mesh points, stuff like that,” said running back Timmy Horn. “Over time, he got tired, which is expected.”

Horn and Goff are two senior presences that should help Reed settle into his earlier-than-anticipated role as the starting quarterback. Horn is averaging 103.7 yards per game and will take much of the pressure off Reed’s shoulder pads.

Goff has already established an on-field connection as the freshman’s No. 1 target, receiving 95 yards from his passes against Palisade.

“I think he played great for a week of practice and he’ll only get better,” Goff said. “He can throw the ball really well. He’s tall and he can see the field really well, so that will help.”

Reed is used to starting in football games with people watching in the stands. Of course, now the size and strength of his opponents is greater than ever, but he knows what he has to do to succeed at this level.

“I need to make smarter choices with the ball,” Reed said. “Once I do that, I’ll be better.”