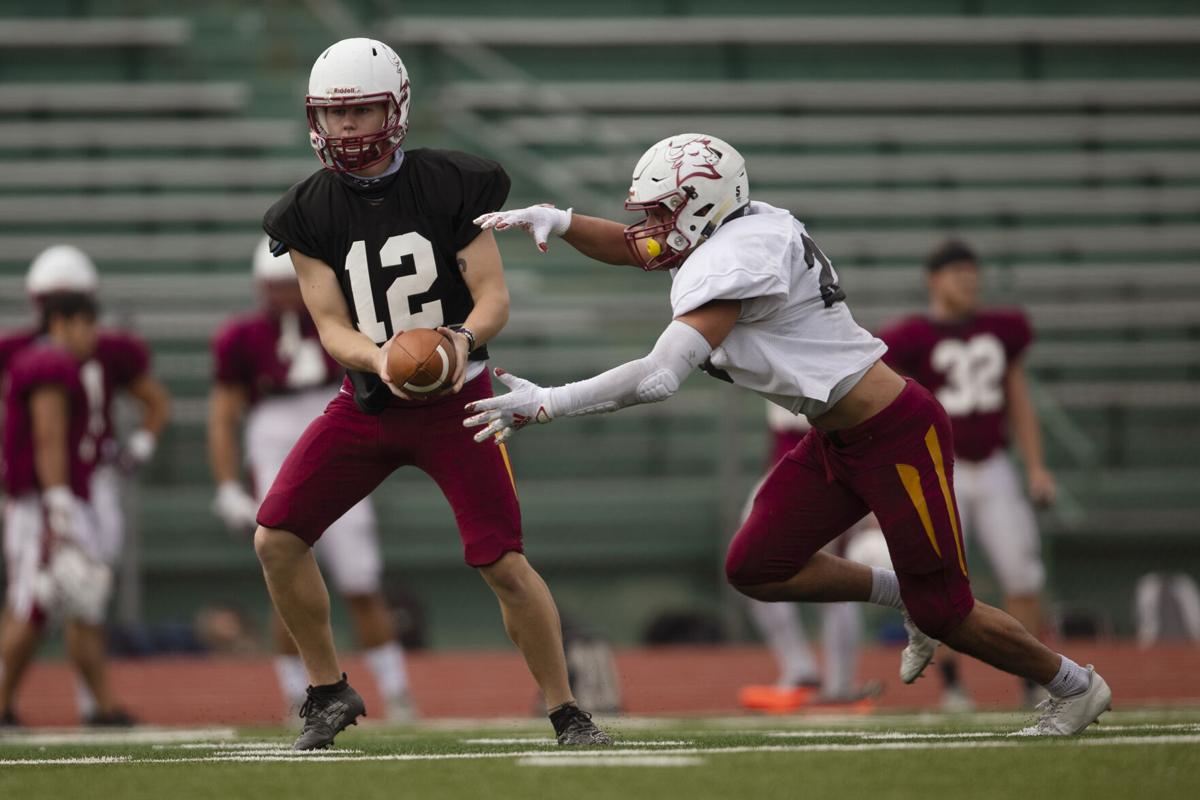 Colorado Mesa quarterback Gavin Herberg, 12, hands the ball to Jesse Rodriquez during a scrimmage at Stocker Stadium earlier this season. Herberg got his first start for the Mavs last weekend, a 56-7 win over Black Hills State. 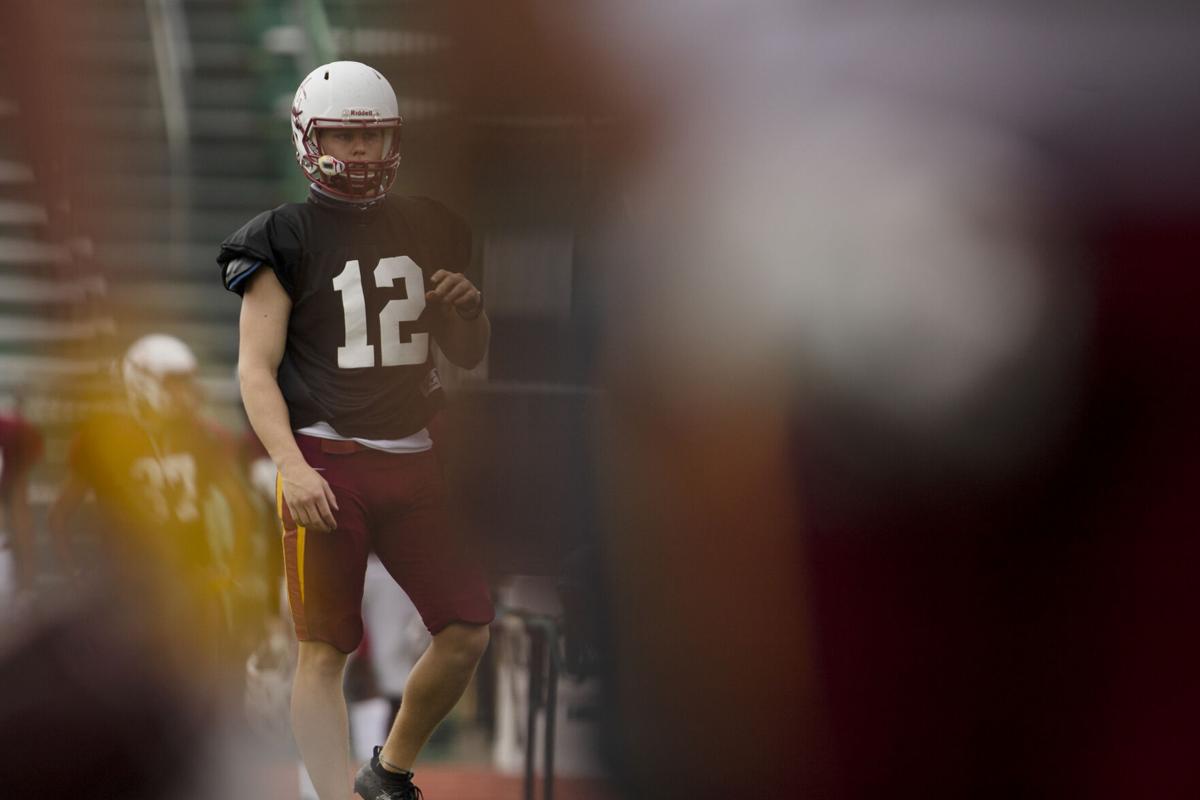 Gavin Herberg, 12, is the new starting quarterback for the Colorado Mesa football team. The freshman got his first start last weekend, a 56-7 victory at Black Hills State. Saturday, Herberg gets his first start at Stocker Stadium.

Colorado Mesa quarterback Gavin Herberg, 12, hands the ball to Jesse Rodriquez during a scrimmage at Stocker Stadium earlier this season. Herberg got his first start for the Mavs last weekend, a 56-7 win over Black Hills State.

Gavin Herberg, 12, is the new starting quarterback for the Colorado Mesa football team. The freshman got his first start last weekend, a 56-7 victory at Black Hills State. Saturday, Herberg gets his first start at Stocker Stadium.

The “question of the week” posed to coaches and athletes at Colorado Mesa’s weekly media session had Gavin Herberg thinking.

“If anyone could play you in the story of your life, who would that be?”

“Mark Walhberg did a good job in ‘Invincible,’ so maybe he could do that. There’s also Matthew McConaughey, very dramatic dude, he’d do a good job,” Herberg said. “Maybe Will Ferrell, he’s most like me.”

Herberg settled on Ferrell, in part because of the curly hair, but there was another option, adjusting the scenario a bit — what movie role could be your story?

With that curly hair, Herberg could slide right into the role of Josh, played by Tom Hanks in the movie “Big,” the kid who magically transforms into an adult overnight.

Unlike Hanks trying to navigate the corporate world when he should be home playing stickball, though, Herberg isn’t fazed one bit by his new role as QB1 at Colorado Mesa University.

“Honestly, I felt I was ready,” said the freshman from Colorado Springs, who last season led Pine Creek High School to the Class 4A state title, throwing for 1,722 yards and 25 touchdowns. “All throughout the summer and since I’ve been here, playing with the same mentality and focus, like this job could be mine.”

The coaches told him early last week he was moving up on the depth chart. Lots of film study ensued, making sure he was set on the game plan — and then it was a matter of taking some deep breaths when he stepped onto the snowy field in Spearfish, South Dakota.

“A little bit of nerves never hurts anything, but you get the first drive out and you just keep rolling with the punches,” he said.

There were some punches to roll with.

On the opening drive, a snap sailed over his head for a 13-yard loss and a fumble that was recovered by the Yellow Jackets. The turnover led to Black Hills’ only points of the game.

The Mavericks quickly overcame the 7-0 deficit and rolled to a 56-7 win. Herberg completed 10 of 20 pass attempts for 143 yards and one touchdown in the snow and ran the ball 15 times for 87 yards and another TD. That, too, was a bit of an adventure.

On 4th-and-goal from the 1, Herberg went over the top, reaching the ball over the goal line. It slipped out of his hands, but he ended up on the bottom of the pile with the ball for the touchdown.

“At that moment in my mind, I knew I messed up because we’re taught not to reach over, and wet conditions, I don’t know what was going through my head,” Herberg said “I was thinking ‘Touchdown, I’ve got to get this, but I messed up, I have to make up for my mistake.’”

The ball landed on the back of an offensive lineman, allowing Herberg to latch onto it.

Like all young players, Herberg is adjusting to the speed of college football, and said film sessions are more intense. He’s slated to start his first home game Saturday when the Mavericks (2-0) play South Dakota Mines (1-1) at noon at Stocker Stadium.

“He’s mature beyond his years,” Jackson said. “You can tell. We knew that when we signed him. Gavin had already graduated during the recruiting process and I think had we been here earlier, we would have tried to get him in here for the spring (semester). He was well beyond where your average freshman would be.”

He was told he’d have a chance to compete for the starting job in the fall, and Herberg took that to heart once he arrived on campus.

“We told him during recruiting that this moment could come, and would he be ready to drive the car, per se, if we gave him the keys,” Jackson said. “He accepted the responsibility and I think most of all, got his teammates to rally around him, which is not common for a freshman.”

Herberg still has plenty to learn, but the best part about moving into the starting lineup as a freshman in 2020 is that he’ll still be a freshman in 2021. The NCAA is granting all players an extra year of eligibility because of canceled or shortened seasons.

“I think it’s going to have a major impact on me for reasons beyond my knowledge,” said Herberg, who has the rare chance to be a five-year starter. “I think it’s great to get these looks this year and still have my eligibility down the road. Extra games can never hurt anything.”

Freshman watch: LB Henrich's versatility will be handy down the stretch