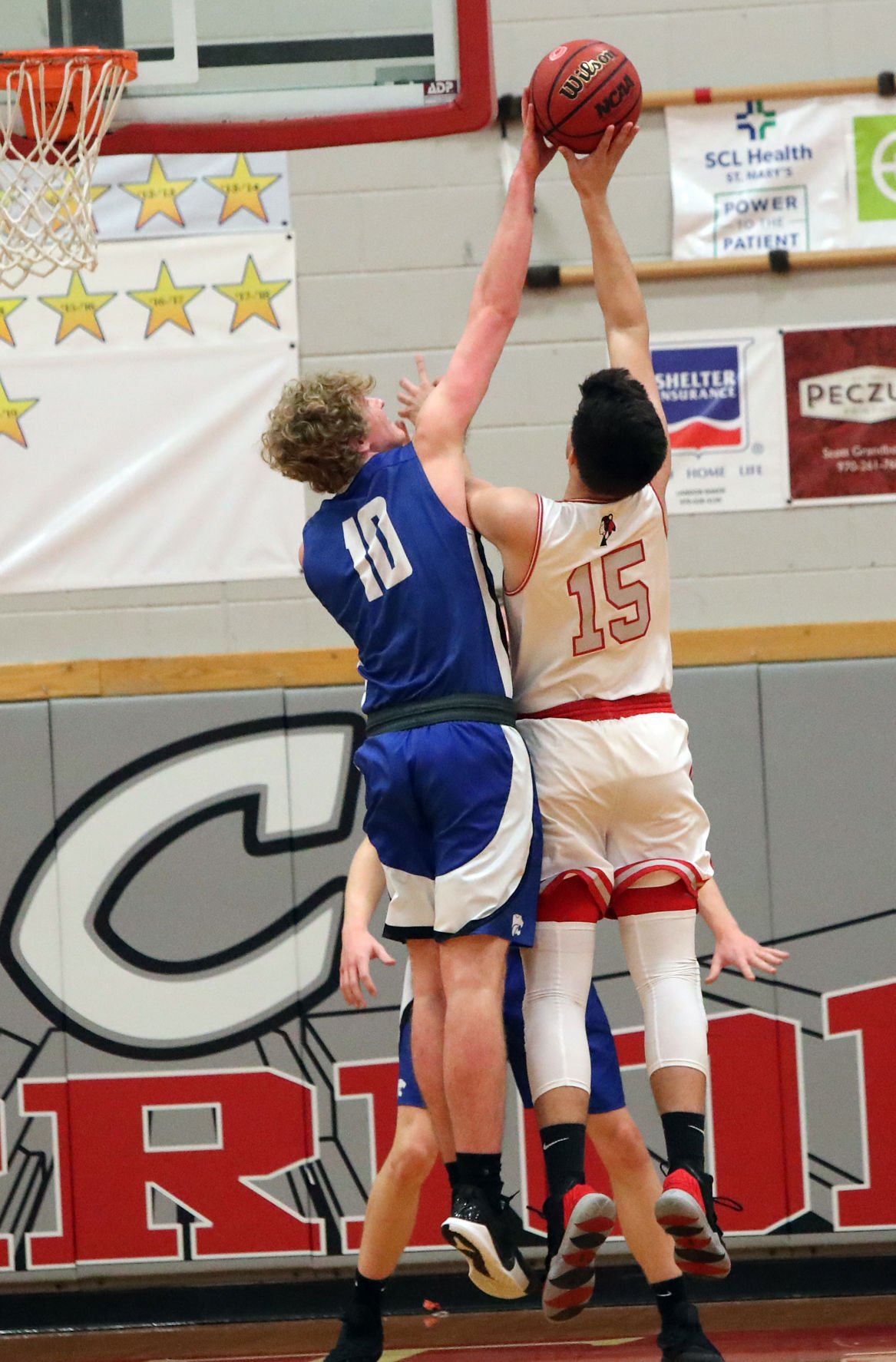 Fruita Monument’s Ian Barnes blocks a shot by Central’s Alex Serrano on Tuesday night in the Wildcats’ 56-33 victory. Barnes was part of a strong inside game for Fruita, scoring a game-high 20 points. 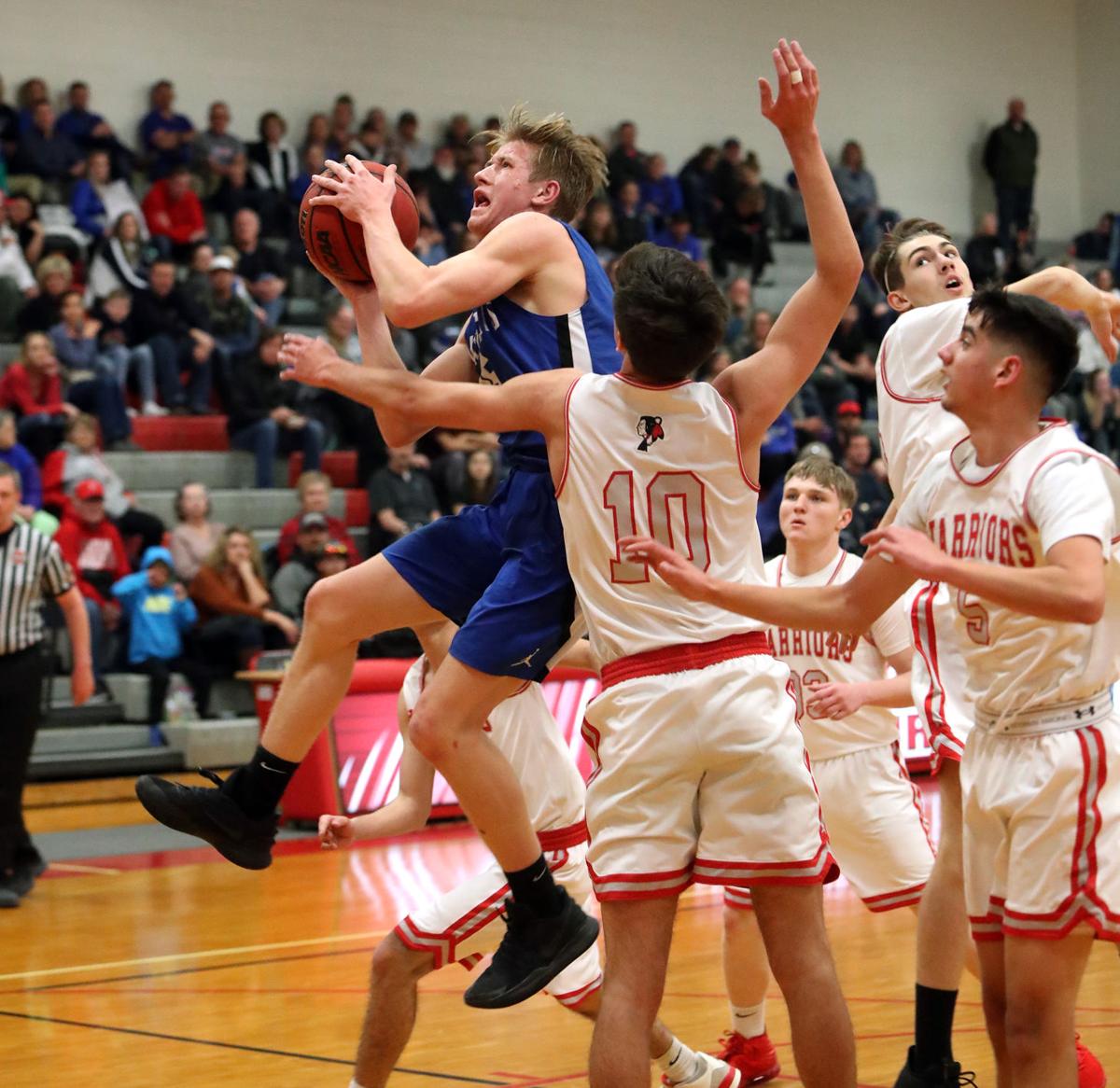 Fruita Monument's Marcus LaBonde weaves through all five Central defenders on Tuesday night to score two of his 13 points in the Wildcats' 56-33 victory.

Fruita Monument’s Ian Barnes blocks a shot by Central’s Alex Serrano on Tuesday night in the Wildcats’ 56-33 victory. Barnes was part of a strong inside game for Fruita, scoring a game-high 20 points.

Fruita Monument's Marcus LaBonde weaves through all five Central defenders on Tuesday night to score two of his 13 points in the Wildcats' 56-33 victory.

Last week, the Wildcats took down Montrose behind a flurry of 3-pointers and dismantled Grand Junction with physicality in the paint.

Tuesday at Central, Fruita stuck with the latter approach.

The win kept the Wildcats (16-5, 6-0 Southwestern League) on course for their third straight SWL title.

“It gives us a ton of confidence,” Fruita coach Ryan Hayden said. “With Jack Hawkins and Ian Barnes in there, just being physical, they’re hard to defend. They’re hard to box out. They’re hard to go at for 32 minutes. In these games, that’s what we can lean on in those times, and then we’ve got spectacular players around those guys.

“Everything kinda falls into place a little bit.”

Barnes scored six of his game-high 20 points in the first quarter, all on layups, as Fruita wasted no time going up double digits. Fruita led 14-4 after one quarter and continued pulling away from there.

“We’re going to come to practice and continue what we’ve been doing,” Barnes said. “We’ve had this goal (winning the SWL) in our heads this whole time. A loss or a win doesn’t sway our confidence any. We have the utmost confidence in achieving that goal.”

The second quarter was Hawkins’ turn to hit three shots, with the final one coming late in the first half to send the Wildcats to the locker room up 28-11.

For the second straight game, Fruita had a big halftime advantage without making a single 3-pointer. In fact, for the first time all season, the Wildcats didn’t need to make a single shot from behind the arc to win.

“We knew they didn’t help very well, so we just tried to get to the rim as much as we could,” said Hawkins, who scored 14 points. “It goes game by game, but we definitely want to attack the rim more than anything. Sometimes, shots aren’t there. But getting to the rim will always be.”

Barnes and Hawkins continued to find success down low in the third quarter. Despite consistent scoring from Railin Manchester, Central (6-14, 2-3 SWL) couldn’t get the stops it needed to work its way back into the contest.

Manchester led Central with 13 points, including seven in the third quarter.

Marcus LaBonde was the third Wildcat in double figures, finishing with 13 points.

Fruita entered the night No. 18 in CHSAA’s Class 5A Ratings Percentage Index standings and bolstered its resume with the blowout win.

For Central, which entered the day No. 51, three spots out of the 5A playoff field if the season ended now, it was another devastating blow.

“We only gave up 56 points, so I’m not really disappointed in that,” Central coach John Sidanycz said. “The first half, we just looked sluggish and un-fundamental. There were a lot of things we could’ve done better.”

Battle Mountain 50, Grand Junction 48: The Tigers were tied with the Huskies (11-7) at 17-17 after one quarter, but Battle Mountain took the lead for good with a 14-6 second quarter.