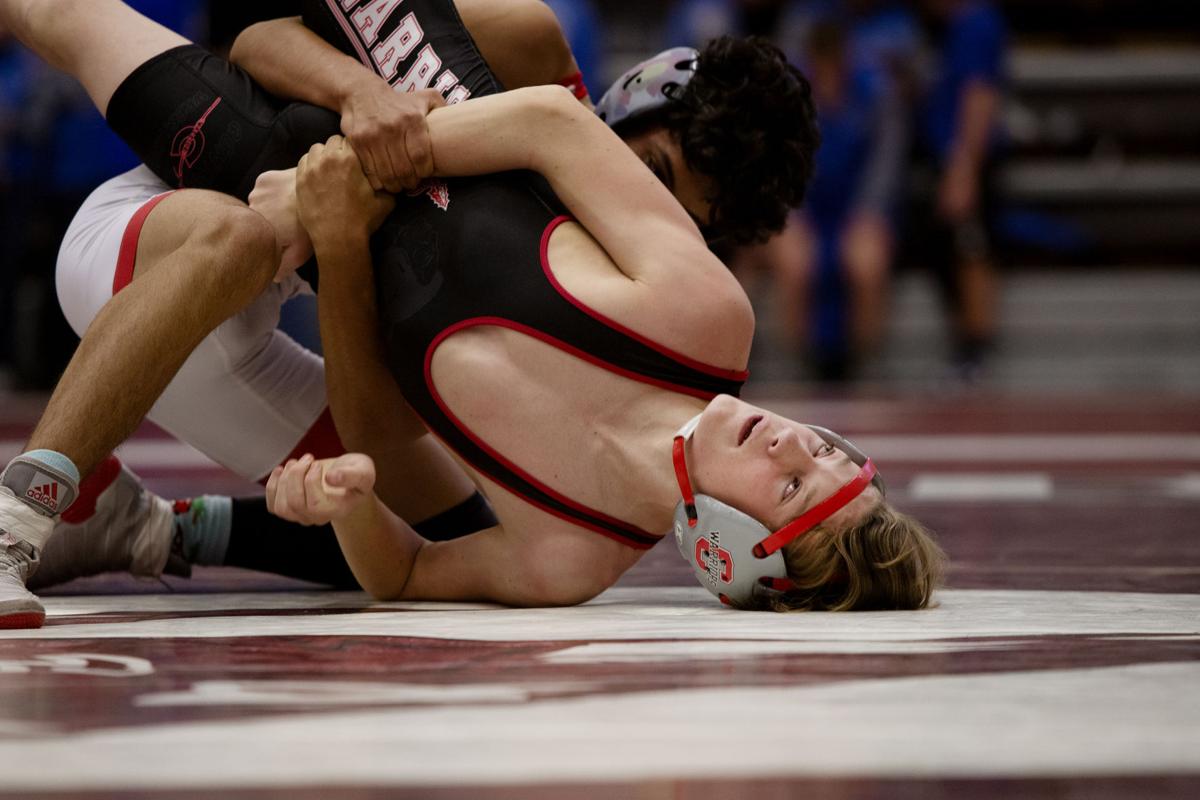 Central freshman Dagen Harris tries to escape the grasp of Montrose's Kameron Alegria in a 113-pound match Saturday at the Maverick Duals at Brownson Arena. Algeria pinned Harris in 4:35. Harris finished 2-3 in the tournament. McKENZIE LANGE/ The Daily Sentinel 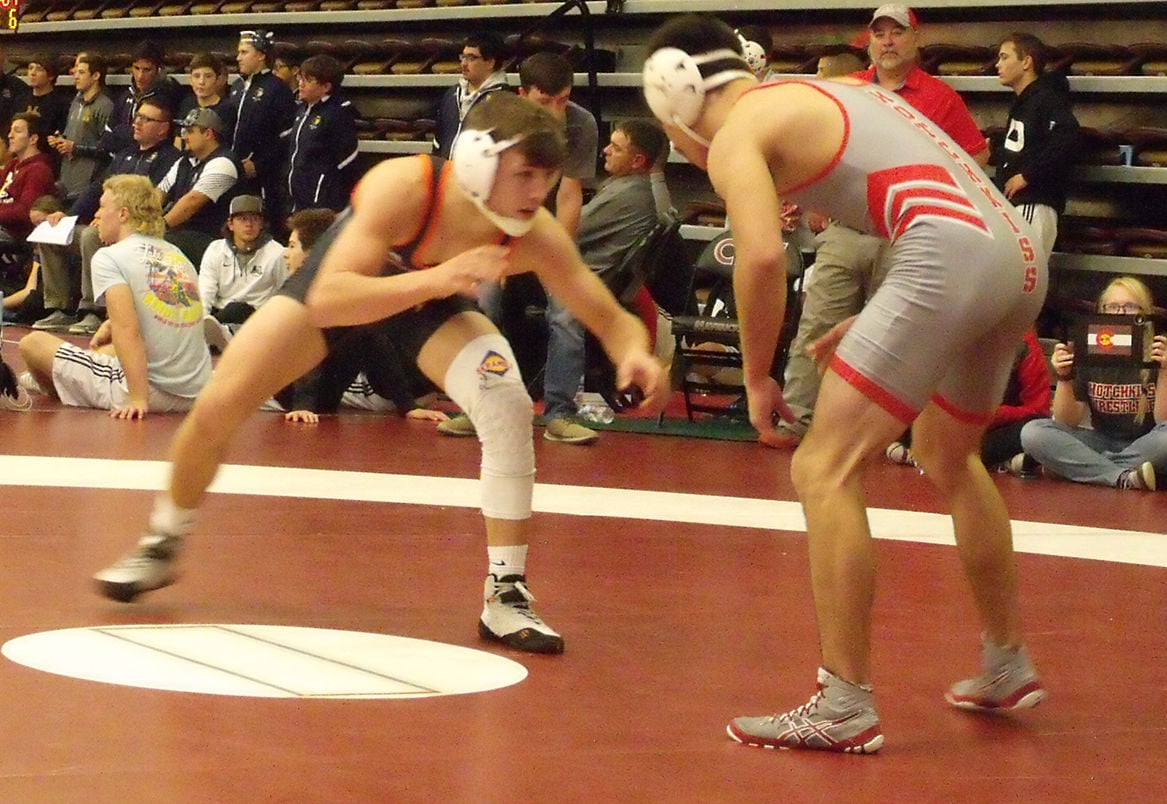 Robert Garcia/Special to The Daily Sentinel Grand Junction's Dawson Collins prepares to take down Hotchkiss' Robert Cochran in a 126-pound match Saturday in the Maverick Duals at Brownson Arena. Collins pinned Cochran in 3:26. Collins, ranked No. 1 in Class 5A his weight class, went 5-0, winning all of his matches by pin.

Central freshman Dagen Harris tries to escape the grasp of Montrose's Kameron Alegria in a 113-pound match Saturday at the Maverick Duals at Brownson Arena. Algeria pinned Harris in 4:35. Harris finished 2-3 in the tournament. McKENZIE LANGE/ The Daily Sentinel

Robert Garcia/Special to The Daily Sentinel Grand Junction's Dawson Collins prepares to take down Hotchkiss' Robert Cochran in a 126-pound match Saturday in the Maverick Duals at Brownson Arena. Collins pinned Cochran in 3:26. Collins, ranked No. 1 in Class 5A his weight class, went 5-0, winning all of his matches by pin.

In the first major multi-team competition of the prep wrestling season, Grand Junction and Cedaredge demonstrated why they are ranked near the top by On the Mat.

The Tigers are ranked second in Class 5A and the Bruins are fourth in 2A.

Both teams went 5-0 on Saturday in the 20-team Maverick Duals at Brownson Arena.

Grand Junction was led by Dawson Collins, a three-time Warrior Classic champion and the state champion in the 2017-18 season.

"A big motivator for me is to talk about winning the Warrior Classic for a fourth time," Collins said. "I want to make history and I am not nervous. Talking about it just pushes me that much harder."

Should Collins win a fourth Warrior Classic title on Dec. 21, he would join Nucla's Tucker Lane and former teammate Josiah Rider as the only wrestlers to accomplish that feat in the tournament's 43-year history. Collins, who is ranked No. 1 at 120 pounds, pinned all of his opponents at the duals and has also placed second and third at the state tournament.

The Tigers' Kieran Thompson either pinned or won all his five matches by technical fall. Thompson, a junior ranked No. 2 at 132 pounds, battled injuries last season.

"I have no limitations from the injury and feel faster and stronger," Thompson said. "Dealing with the injury helped me mentally grow and just helped my overall mindset."

Thompson is a returning Warrior Classic champion and has placed sixth and fifth at the state tournament.

Grand Junction was missing No. 1-ranked 106-pounder Andrew Leyba, who did not participate because of an illness.

Another high-profile individual at the duals was Cedaredge's Trey Geyer, ranked No. 1 in Class 2A at 126 pounds. The junior is on pace to become the next four-time state champion from the Western Slope.

The Bruins' Sean Dale, who won the state title in the 2017-18 season and is a three-time state qualifier, went 5-0 and appears healed from last season's nagging injuries. Also posting 5-0 marks for Cedaredge were Lane Hunsberger (113) and Derek Sanchez (285).

Delta's Gauge Lockhart, ranked No. 1 in Class 3A at 195, won one match by pin and four others by forfeit.

Fruita Monument takes fifth: The Wildcats finished fifth out of 17 teams at the Arapahoe Tournament.

Callie Allen scored 21 points and Kloe Bates added 11 with three 3-pointers after halftime as Fruita Monument (4-0) defeated Skyridge 54-53 to win the Shannon Johnson Classic in Vernal, Utah. Skyridge is a Class 6A school in Utah and won the 5A championship last season.

Wildcats coach Michael Wells was thrilled with his team's defensive performance against the Falcons (5-1).

"We really played as a group. We had all five players on the floor doing their job defensively," Wells said. "We knew we'd have to be good on that end... We made enough baskets and got enough stops to get it done."

Central 40, Palmer 33: The Warriors finished third in the Palmer Tournament in Colorado Springs.

"She did so many good things with the ball, passing, playing sound defense," Doane said. "She did a lot of things that don't show up on the stat sheet. She was phenomenal."

De Beque 48, Twin Peaks 18: The Dragons improved to 1-1 with the victory in Idalia. Senior Jadyn Graham scored a career-high 20 points.

Jaden Jordan scored a career-high 31 points and Wes Ryan added 28 for the second straight game as De Beque won the Idalia Tournament 82-74 in overtime over Briggsdale.

Emma Kimbrough won all of her events and qualified for the state meet in the 100-yard breaststroke and 200 individual medley.

Eliza Codner won both of her events, qualifying for state in the 100 backstroke and just missing a state time in the 100 freestyle by half a second.

The medley relay and 400 freestyle relay teams qualified for the state meet. Sarah Cook won the 200 individual medley and 100 breaststroke, qualifying for state in both. Riley Pope finished fourth in the 200 IM, also qualifying.

Nina English won the 50 freestyle, in which she had already qualified for state. Mady Martinez took seventh in the event in her first season on the swimming team.

Mallory Cawood and Sarah Gaumer took third and fifth, respectively, in the 100 butterfly.

The prep season in Colorado officially ended Saturday with the 5A, 4A and 3A state championship games.

Cherry Creek dominated Columbine 35-10 in the 5A title game at Empower Field at Mile High to finish the season 14-0. Jayle Stacks ran for 141 yards and a touchdown to earn the game's MVP award.

Also claiming the state title at Empower Field was Pine Creek, which wrapped up the 4A title with a 34-3 rout of Broomfield. Gavin Herberg ran for 131 yards and a score and threw a 35-yard touchdown to Eddie Kyle, who added a 74-yard pick-six later in the game for Pine Creek (13-1).

The 3A title went to Palmer Ridge for the third consecutive season. The Bears (12-2) defeated Pueblo South 35-13 at the ThunderBowl in Pueblo. Luke McAllister completed 8 of 17 passes for 272 yards and four scores.