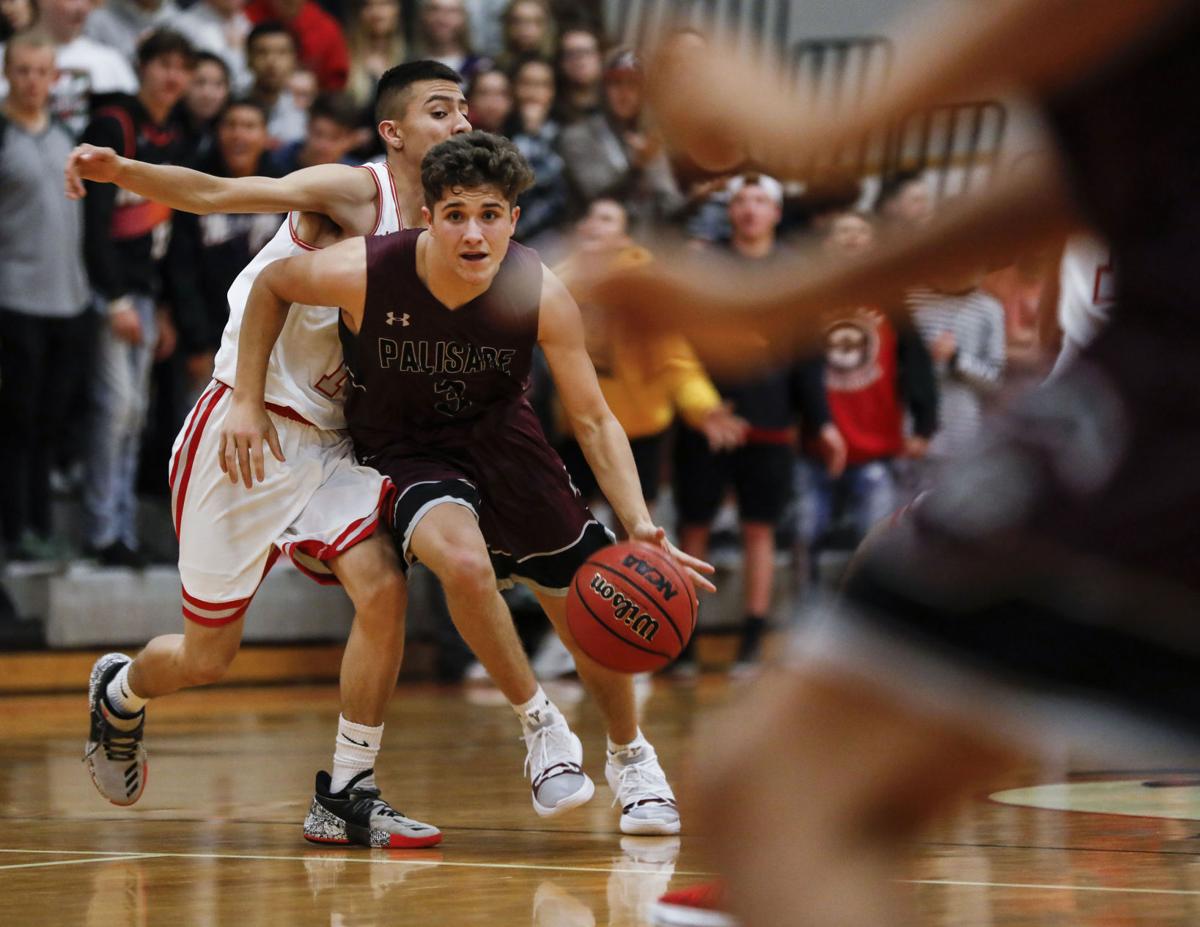 Palisade's Sebastian Campbell drives past Central's Julian Strohm on Friday night in the Bulldogs' 48-44 victory at the Warrior Challenge. Campbell scored 10 points in the win, including three late free throws to ice the game. Below, the Warriors' Caleb Davis scores two of his 12 points. 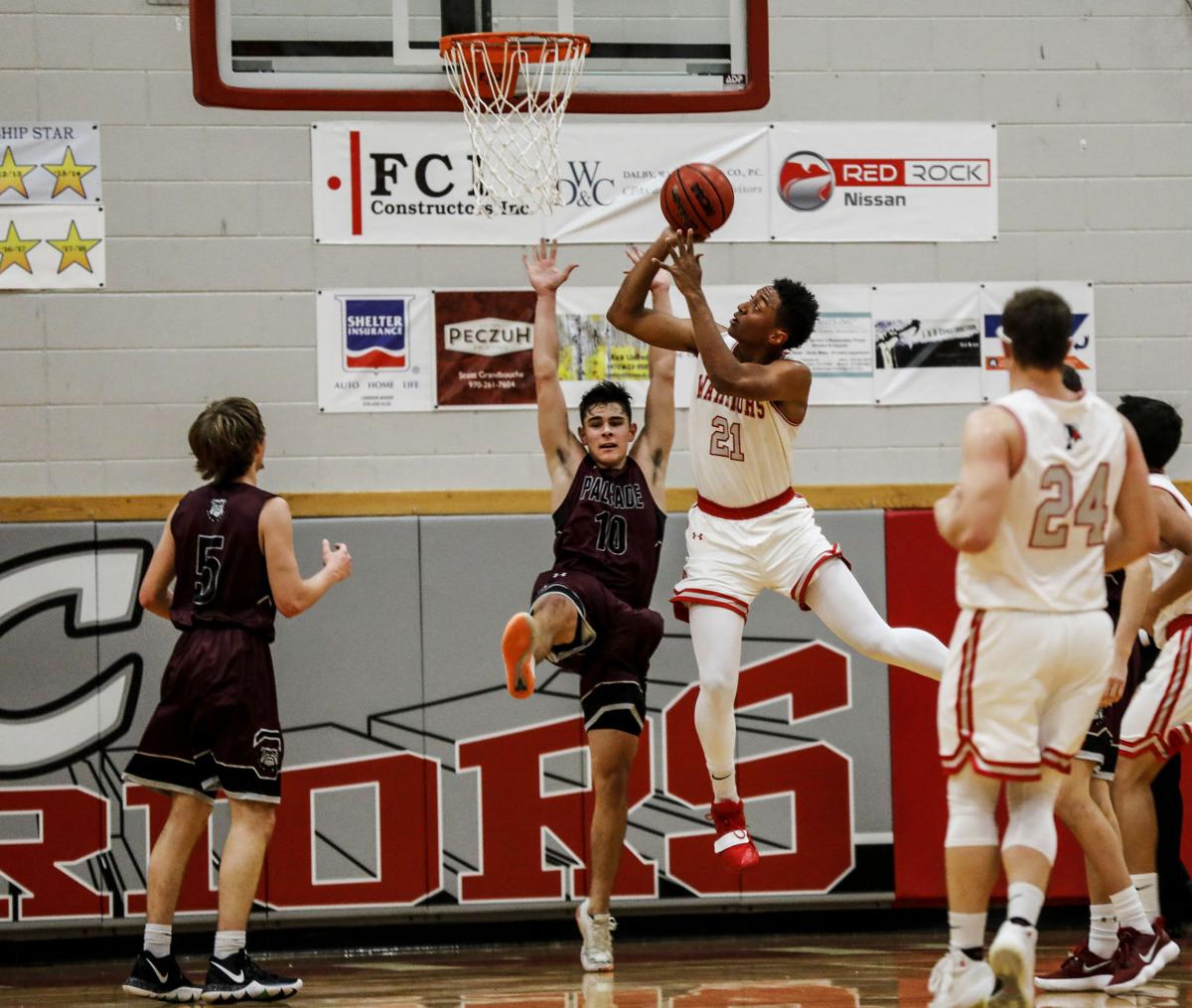 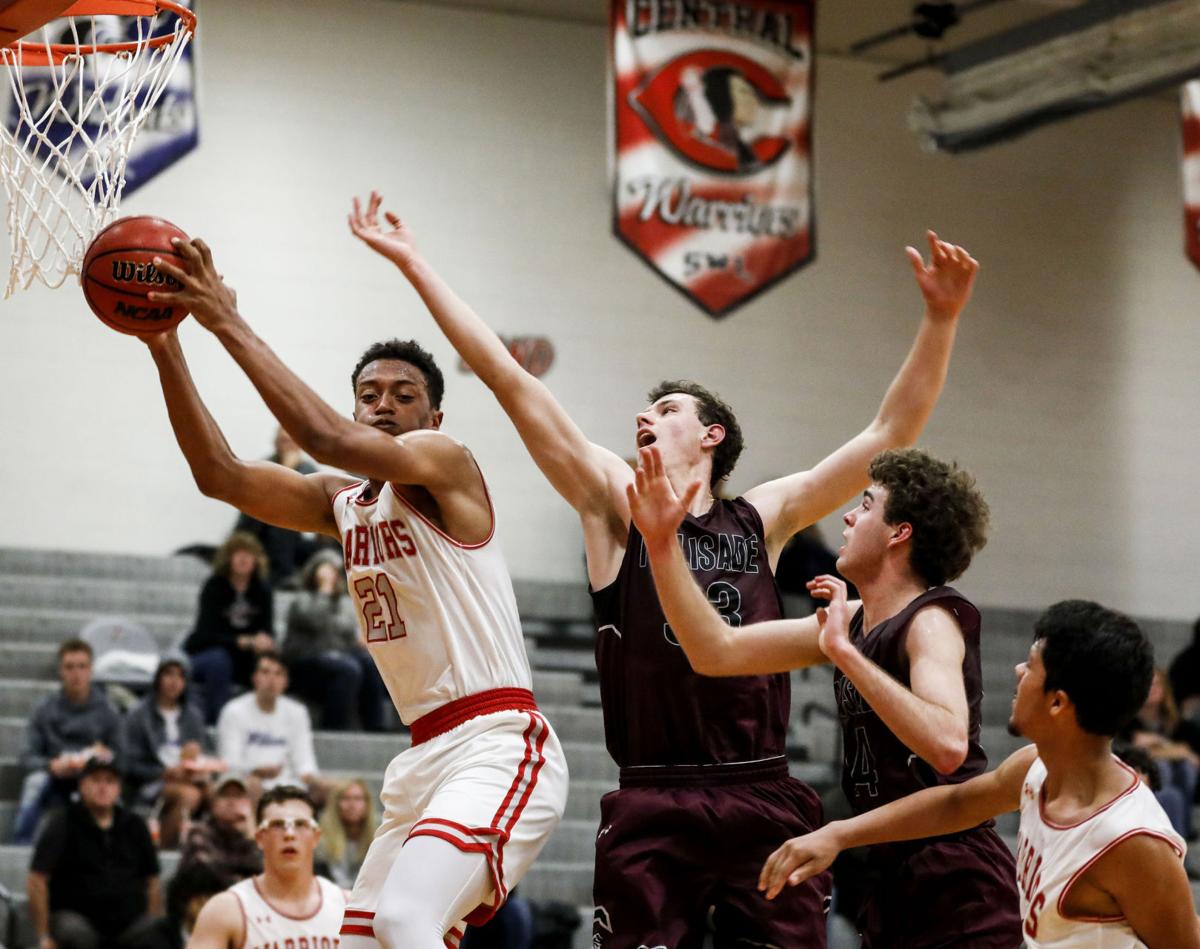 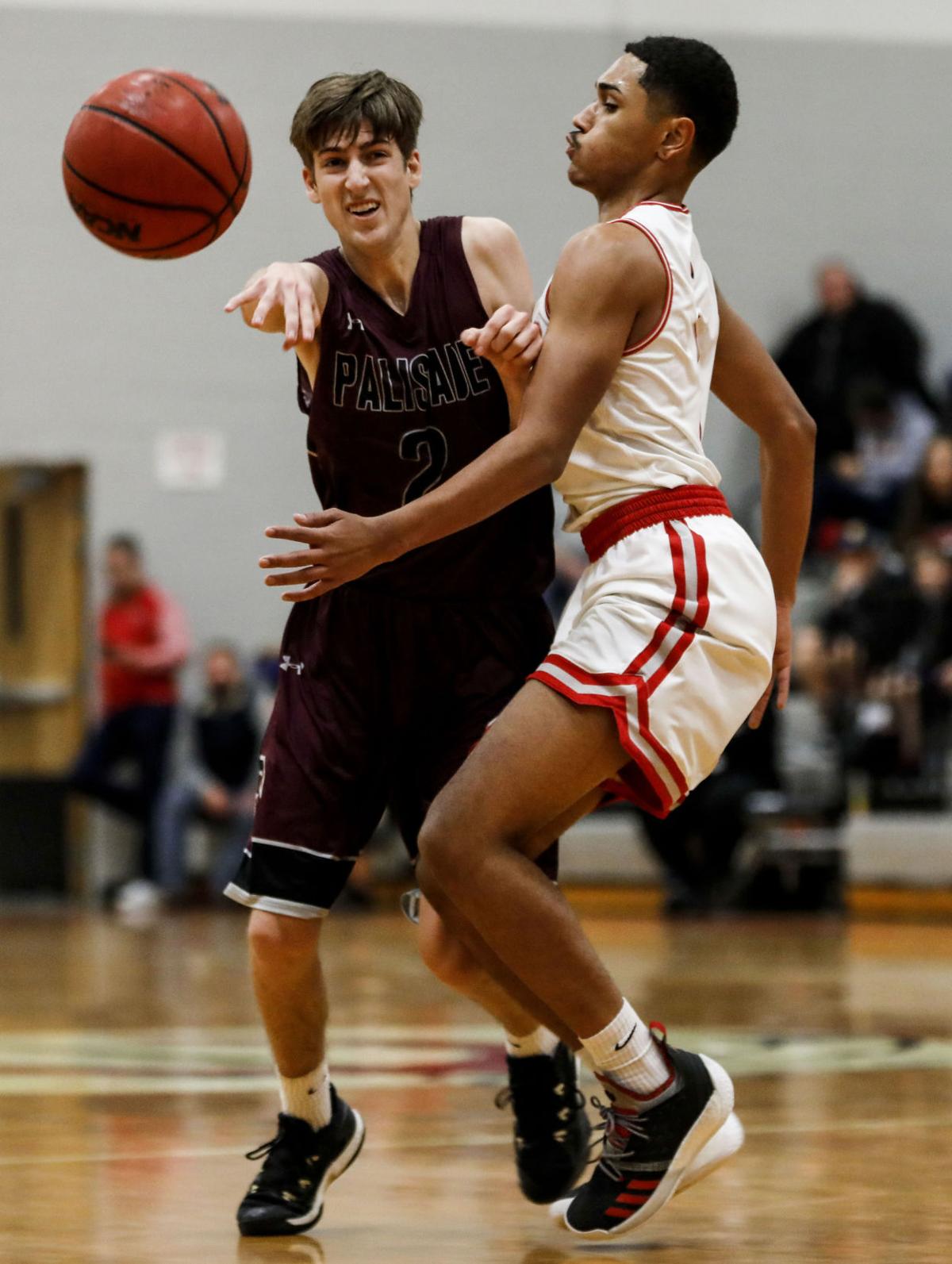 Palisade senior Logan Tarman (2) pass the ball as Central senior Tyrese Holder (0) blocks him from moving past during the Warrior Challenge basketball tournament at Central High School on Friday, November 30, 2018. 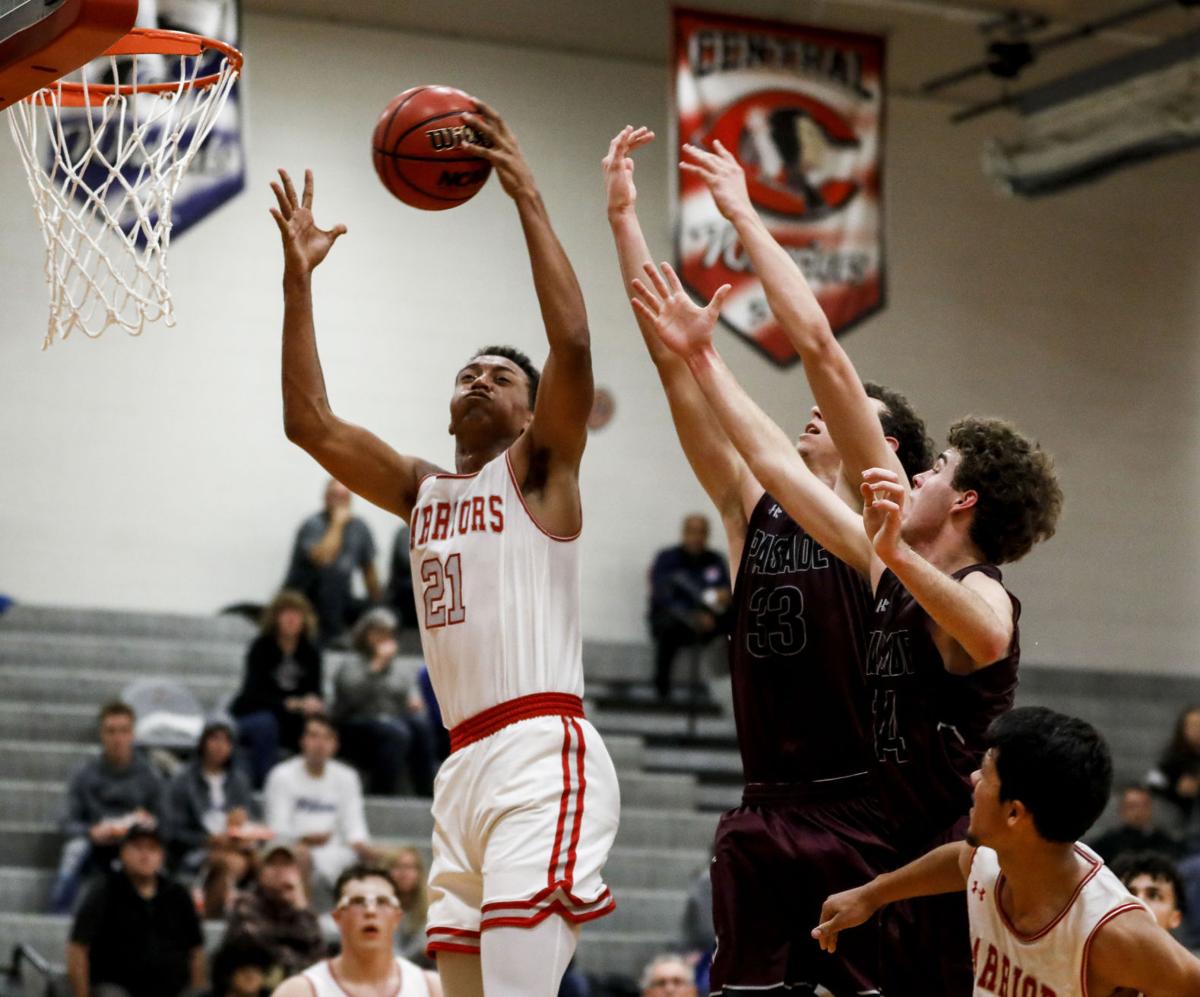 Palisade's Sebastian Campbell drives past Central's Julian Strohm on Friday night in the Bulldogs' 48-44 victory at the Warrior Challenge. Campbell scored 10 points in the win, including three late free throws to ice the game. Below, the Warriors' Caleb Davis scores two of his 12 points.

Palisade senior Logan Tarman (2) pass the ball as Central senior Tyrese Holder (0) blocks him from moving past during the Warrior Challenge basketball tournament at Central High School on Friday, November 30, 2018.

The gym was rocking, the pressure was on, the game was in the balance.

Central was in the midst of a furious comeback Friday night at the Warrior Challenge, cutting Palisade's lead to 43-40 late in the game.

The Warriors needed another stop.

Watts Erb, Palisade's 6-foot-3 junior, got the ball in the paint with Central's long-armed 6-6 big man Caleb Davis poised for the blocked shot.

That's when Erb gave him an emphatic pump fake and the rest was history.

Erb calmly banked home a basket to make the score 45-40 with about one minute to go.

Erb said it was a fun game.

"It's definitely a rivalry, I've played against these guys my whole life," he said. "There was so much energy in here. The crowd really got going, it was so much fun."

As for the pump fake, he just smiled.

"He's such an incredible athlete and he can jump, and I know how to get him to jump, so that was fun," he said.

With a big crowd and raucous student sections for both schools getting loud, the final minute was frenetic.

After Erb's bucket, the Warriors grabbed the momentum back.

Davis snagged a rebound and made a long outlet pass to Isaac Cameron, who zipped a pass to Jayden Maes for the layup to cut the lead to 45-44. But Palisade forced two turnovers in the final 30 seconds to preserve the Bulldogs' second win at the tournament.

Palisade always had an answer to Central's push to take the lead.

A three-point play by Cameron cut the lead to 40-38, but Kevin Loya got a steal, which led to an Erb layup off an assist from Zane Haas.

For the second straight night, the Warriors suffered through a dismal first half and had to play from behind.

Central's only lead was 3-2 in the opening minutes of the game.

Palisade pushed the second half lead to 31-20 on two free throws from Brendon Anderson.

That's when the Central rally took off.

Nathan Ramos and Maes hit 3-pointers, David Cardenas made a free throw and the Bulldogs' lead was down to 31-30.

The Bulldogs answered with a quick 6-0 run.

Haas scored off an assist from Erb, then Loya used a screen from the 6-8 Haas to drain a 3-pointer.

The first half was a battle of Central's inside game and Palisade's outside game.

The Bulldogs' shooters were neon hot in the first half, hitting five 3-pointers and another two jumpers inside the arc to give them a 25-16 halftime lead.

Campbell got Palisade started with a pair of 3-pointers for an 11-5 lead.

Cameron and Davis, who had 14 and 12 points, respectively, were scoring in the paint for the Warriors. Davis hit back-to back baskets to make the score 11-9 at the end of the first quarter, and Cameron banked in a shot to tie the game at 11-11 to start the second quarter.

Erb, who finished with a game-high 15 points, scored seven points down the second-quarter stretch, and Loya hit a 3 and a jumper in the final minute to put the Bulldogs up 25-16 at the half.

Loya, who finished with three 3-pointers, had 13 points in the game.

Palisade kept its composure in that final chaotic minute.

"We really got our energy up and we were all working as a team. We had a lot of assists," Erb said.

The Bears used a harassing, pressure defense and hot outside shooting to hold off the Wildcats and stay unbeaten in the Warrior Challenge.

Senior Grant Karger hit three 3-pointers in the final four minutes to help the Bears pull away down the stretch.

Late in the first half, a Dillon Keithley putback gave the Wildcats a 22-19 lead but the Bears responded with an 8-0 run and took a 33-30 halftime lead.

Ian Barnes had back-to-back buckets to give Fruita its largest lead at 40-35 in the third quarter.

The Bears again rallied and led 46-40 early in the fourth quarter when Marcus LaBonde hit a 3-pointer.

LaBonde assisted Barnes on a basket, then Keithley found Barnes for another bucket and the Wildcats grabbed the lead back at 49-48 with 4 minutes, 40 seconds to go.

That's when Karger, who had a game-high 19 points, got hot from behind the arc to key the Bears' win.

Keithley led the Wildcats with 16 points and Barnes had 14.

Grand Junction hung with Horizon for most of the first half, trailing 10-6 after the first quarter and 29-21 at halftime.

The Hawks then pulled away in the third quarter.

The Tigers were led by Blaine Butler with 14 points. The sophomore drilled four 3-pointers in the game. Ricky Page added eight points for the Tigers.

Alex Lawrence led a balanced scoring attack for the Hawks with 11 points.