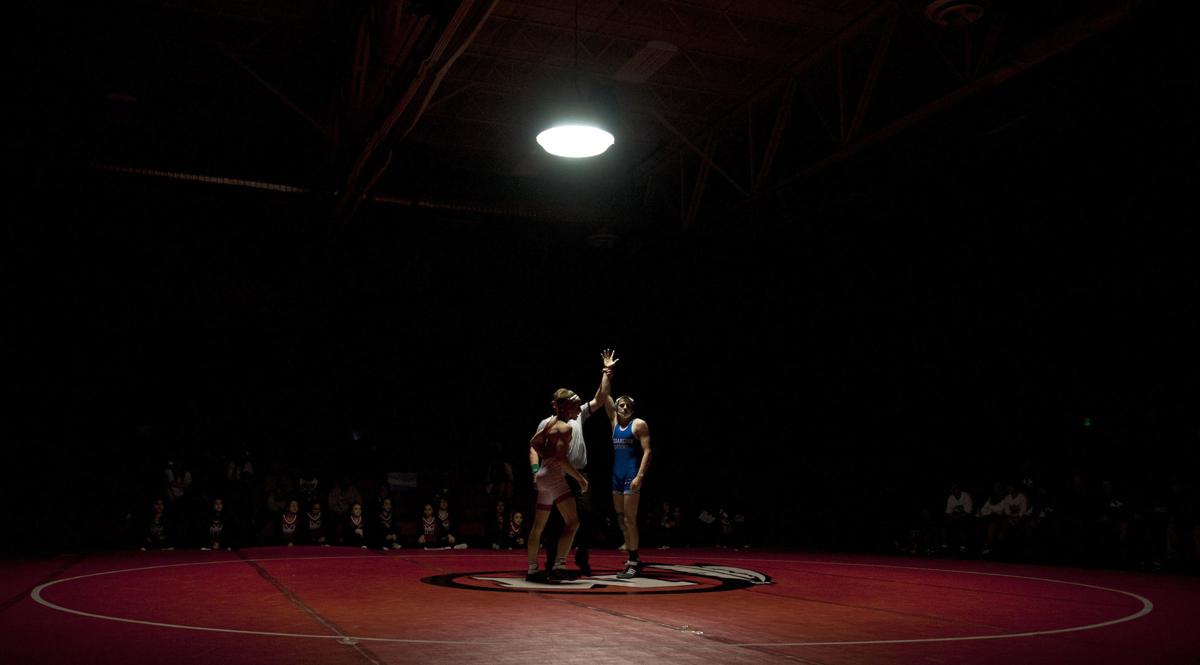 Photos by WILLIAM WOODY/Special to The Daily Sentinel Cedaredge's Alex McCracken has his hand raised as the winner of a 132-pound match earlier this season against Montrose. McCracken, a senior, has seen the Bruins' wrestling program grow into a power, currently ranked No. 2 in Class 2A. Trey Geyer, top right, is one of two Cedaredge wrestlers ranked No. 1. Sean Dale is the other. Below right, the Bruins' Colton Hoerr gets the upper hand against Montrose. 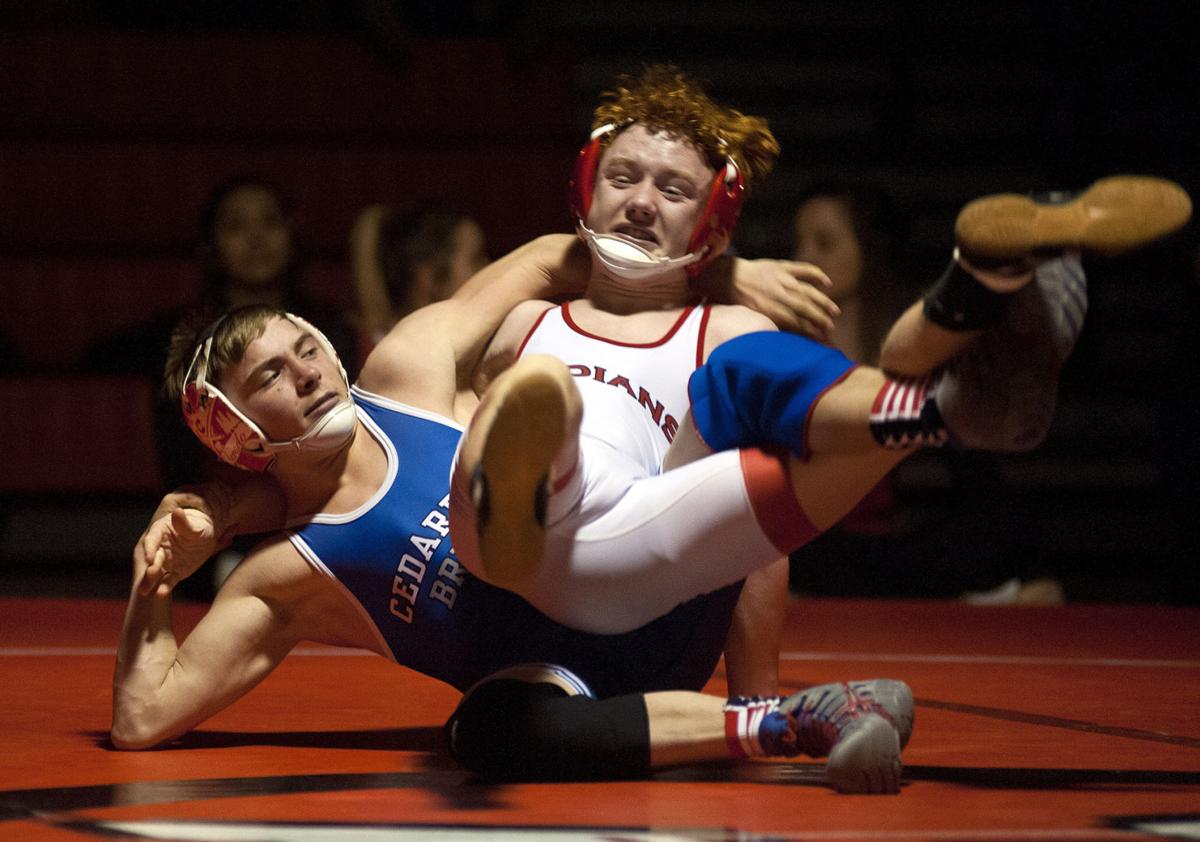 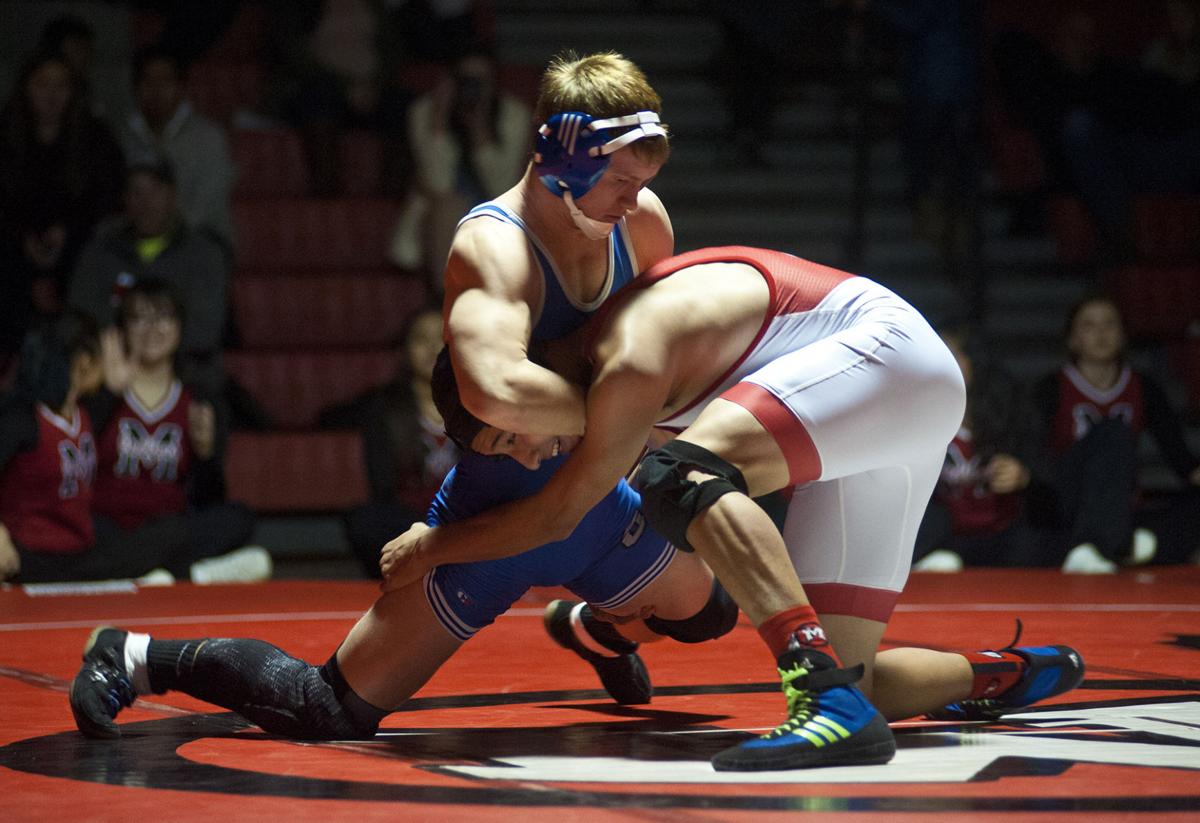 Photos by WILLIAM WOODY/Special to The Daily Sentinel Cedaredge's Alex McCracken has his hand raised as the winner of a 132-pound match earlier this season against Montrose. McCracken, a senior, has seen the Bruins' wrestling program grow into a power, currently ranked No. 2 in Class 2A. Trey Geyer, top right, is one of two Cedaredge wrestlers ranked No. 1. Sean Dale is the other. Below right, the Bruins' Colton Hoerr gets the upper hand against Montrose.

The Cedaredge High School trophy case is a bit cluttered, and that's a good thing.

There's the gold ball trophy from the 2012 football title, and the hardware from two boys track and field team state titles in 2016-17.

The girls volleyball, basketball teams have also made plenty of additions to the trophy case over the years.

Missing in recent years are trophies from wrestling, the one sport without a rich tradition of success for the Bruins.

That is changing — quickly.

For much of this season, Cedaredge has been ranked No. 1 in Class 2A and a number of Bruins have a shot to win a state title.

For decades, wrestling glory along and off Highway 133 has been reserved for Hotchkiss and Paonia.

Paonia has been one of the most successful small-school wrestling programs in the state for more than a decade and has chalked up five 2A team titles since 2007.

Four years ago, Cutter Garrison was hired as Cedaredge's new coach. He wanted to bring respect to the Bruins' wrestling program.

He was familiar with the school's lack of wrestling tradition and his mission was to change that.

"My goal was to just turn the program around," Garrison said. "I knew it would be a process, everything is a process. I just wanted to build a love for the sport, I wanted the kids to be passionate about it and think about it all year long. I wanted to get them to buy in and they have."

The highest state tournament finish for Cedaredge as a team was seventh. Last year the Bruins placed eighth and their best individual finisher was freshman Sean Dale, who was fourth at 120 pounds.

Only four wrestlers have won individual state titles for Cedaredge, the last one in 1986.

This year, the Bruins' goal is to make their legacy.

"Coach Garrison came in and it was a fresh start for Cedaredge," said Alex McCracken, one of seven seniors on the team.

McCracken has grown with the program — literally — starting at 106 pounds and now he wrestles at 132, where he hopes to qualify for his fourth state tournament and win his first state medal.

"We started off like nowhere on the map, no one knew us, then Coach Garrison built up the program and we now have quite a few seniors that have been on the team that started as not really anything," he said. "We just kept climbing every year and now we're up near the top because we keep pushing limits."

Garrison, who wrestled and was coached at Montrose High School by his dad, had to get the Bruins passionate about the sport and get them to work and improve.

"We just want to take the mat with pride and bring it, and continue to out-work everyone, every day," he said.

Garrison also talked to his team about the sports tradition at Cedaredge and how wrestling needs to be part of it.

The Bruins have bought in.

Taj Van der Linde felt the torment of just missing qualifying for state as a sophomore. Over the summer he practiced and went to wrestling tournaments, and this year he's been ranked consistently as the second-ranked 220-pounder.

"Not qualifying for state was really disappointing, it made me go kind of psycho and work 100 times harder," Van der Linde said.

As the team improved, the practices grew more intense.

"We've got great coaches that push you and the best thing is we have great drilling partners and they push you because they want to get better, too," he said.

The Bruins have had some growing pains as the season has progressed as that No. 1 ranking has put a target on their backs.

Garrison said the losses were OK.

"Honestly, I think it might be the best thing that's happened to this team," he said. "It was at the mid-point, we had three weeks to go before regionals, so it was a re-focusing. We got back to work and reminded them that the state tournament is not won in January."

The latest On the Mat Rankings show the second-ranked Bruins have a legitimate shot at the 2A team title. Heading into next weekend's regional tournament at Delta, Cedaredge has 10 wrestlers ranked in the top eight in their weight classes, including Dale (126) and Trey Geyer (120), both ranked No. 1

Top-ranked Rocky Ford has two wrestlers at No. 1 and eight ranked in the top six.

Building a wrestling tradition is something that every member of the Cedaredge team is focused on, and they know that will only come from a special performance at state.

"I think people will look back at this team and say they built that tradition," Van der Linde said.

This is McCracken's final chance to help establish a new wrestling tradition at the school and he is currently ranked No. 4 at 132.