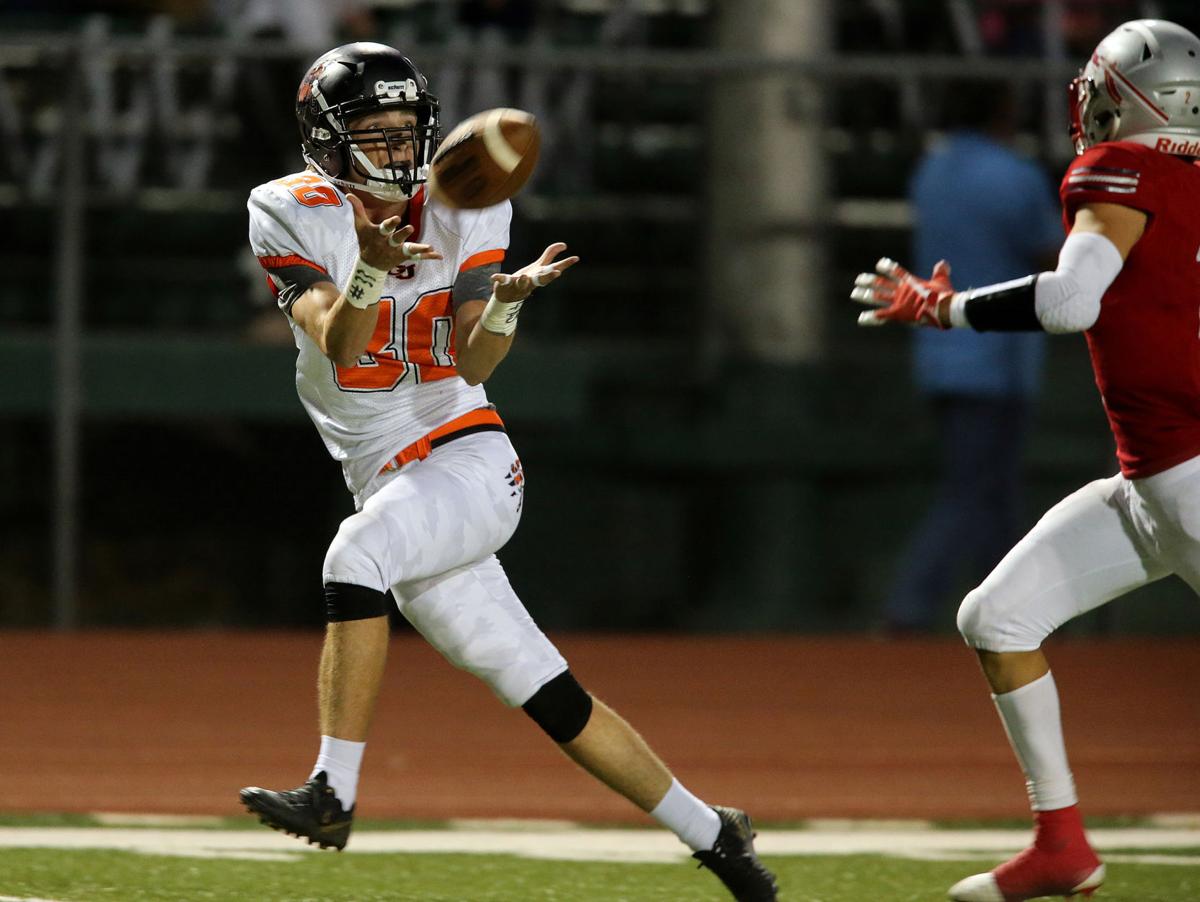 Grand Junction's Ethan Schmidt hauls in a 39-yard touchdown reception Thursday night just before halftime in the Tigers' 50-14 victory over Central at Stocker Stadium. Below, Grand Junction's Carson Loveridge breaks loose for some of his 185 yards rushing. Loveridge had two rushing TDs in the win. 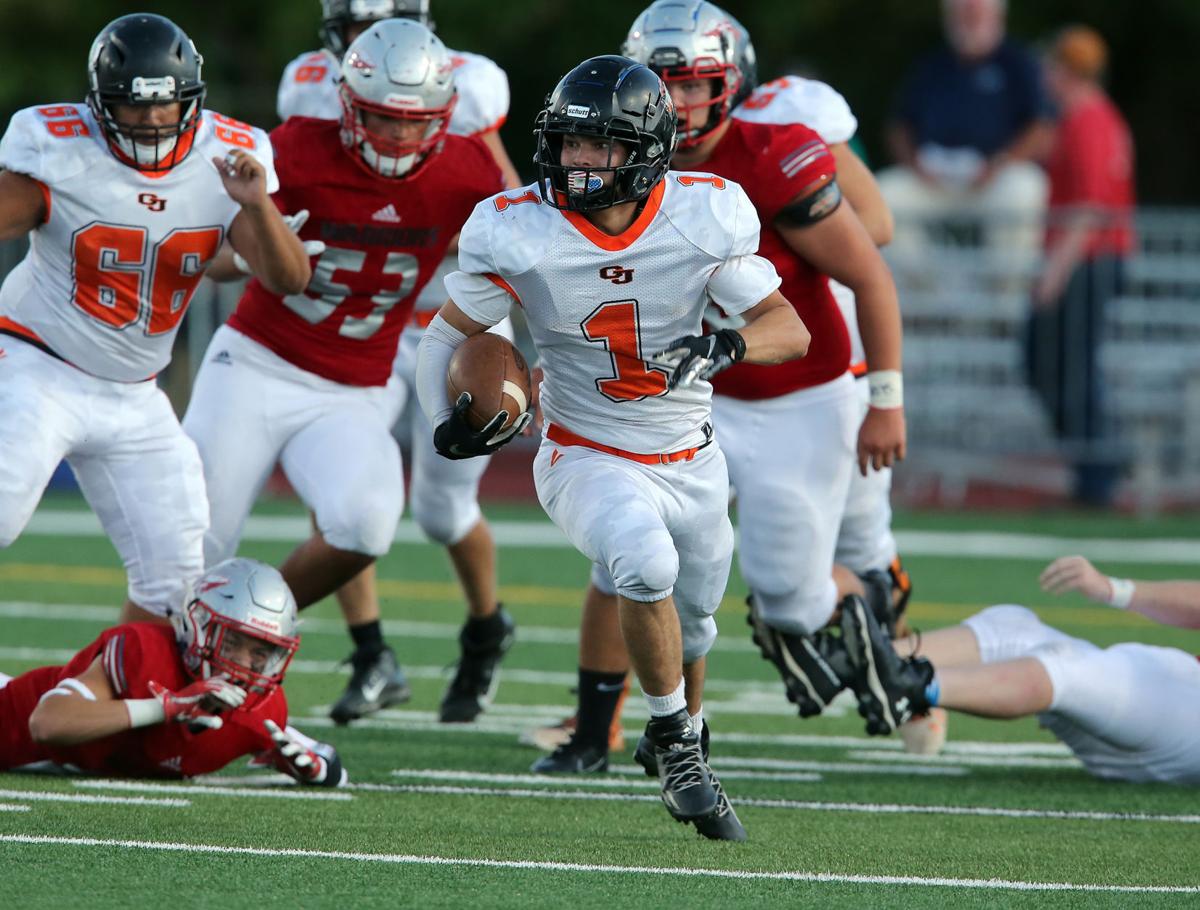 THE ASSOCIATED PRESS Derek Wolfe, 95, and the Broncos' run defense has allowed only one 100-yard rusher in the past five games. Denver's defense will face a stiff test Sunday in Minnesota in the form of NFL rushing leader Dalvin Cook. 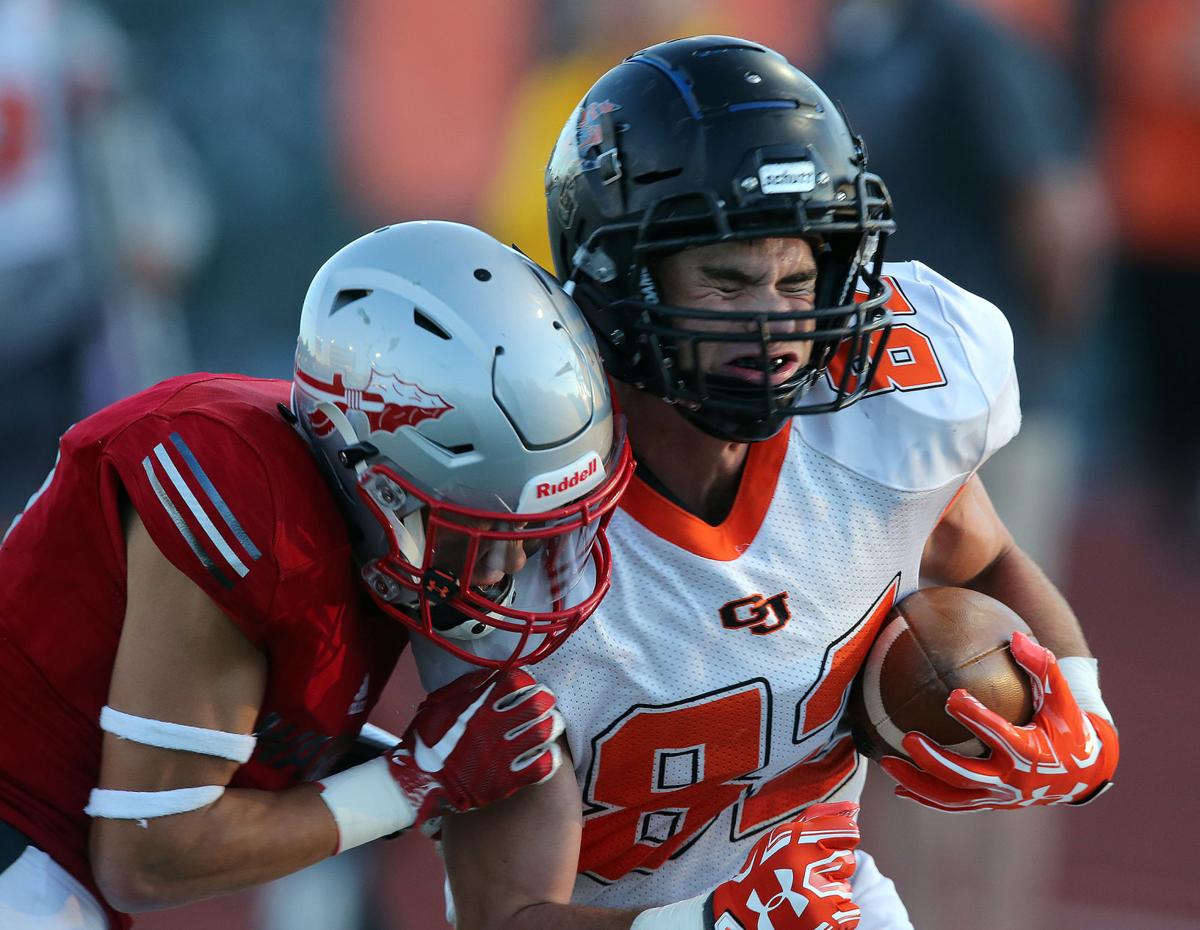 Grand Junction's Ethan Schmidt hauls in a 39-yard touchdown reception Thursday night just before halftime in the Tigers' 50-14 victory over Central at Stocker Stadium. Below, Grand Junction's Carson Loveridge breaks loose for some of his 185 yards rushing. Loveridge had two rushing TDs in the win.

THE ASSOCIATED PRESS Derek Wolfe, 95, and the Broncos' run defense has allowed only one 100-yard rusher in the past five games. Denver's defense will face a stiff test Sunday in Minnesota in the form of NFL rushing leader Dalvin Cook.

The Grand Junction High School football team knew it let an opportunity for a statement win slip away in last week's 32-point loss to Montrose.

On Thursday night at Stocker Stadium, the Tigers took out those frustrations on crosstown rival Central, dominating from the start in a 50-14 victory.

Grand Junction (2-1) has won two of the past three meetings against the Warriors (0-3).

"I'm really excited about our kids; I mean, we didn't have any turnovers," said Grand Junction coach Mike Sirko. "For us, after last week, that was something we had to work on. We knew with this being a rivalry, we had to play better and we did."

The Tigers dominated in the first half, jumping to a 28-0 lead going into the locker room. In the half, Grand Junction outgained Central 295 yards to 78 yards.

Quarterback AJ Mariz played a key role in the Tigers' success, completing all five of his passes in the first half for 109 yards and two touchdowns to go along with 72 rushing yards and another score.

He set the tone on the opening drive, finding room on the left side for a 24-yard gain on the first play from scrimmage. A few plays later, Mariz rolled to his left and hit Andy Smith for a 25-yard gain, setting the Tigers up at the 5.

Three plays later, Mariz rolled out again, this time to his right, and hit Dillon Smith in the flat for the opening score.

"It's good to get a win over the crosstown rivals," Mariz said. "Our offense, our defense, we all stuck in there pretty good."

Later in the quarter, Carson Loveridge ran through a hole in the middle of the line and raced down the left sideline for a 60-yard gain.

On the first play of the second quarter, Grand Junction burned Central to the left again. With the ball at the 3, Mariz fumbled the snap from the shotgun formation, but he picked up the loose ball and ran to the left for a TD and a 14-0 lead.

A third-and 18 play on the Tigers' next drive summarized the night for both sides. Mariz rolled left to escaped and launched the ball to a well-covered Dillon Smith for a 33-yard gain to set up the offense in the red zone.

That drive ended in a 1-yard scoring plunge by Nicholas Burke.

The Tigers struck one more time before halftime. With the ball at the Central 39, Mariz rolled to his right and heaved the ball to Ethan Schmidt, who was streaking open down the sideline to increase the lead to 28-0.

"I just came out and had time to throw the ball thanks to my offensive line," Mariz said. "I just slung it and the best things happened thanks to my receivers."

With the Tigers' offense moving the ball up and down the field, the defense was frustrating a Central offense missing its starting quarterback, Michael Gohn, who was out with an elbow injury.

Central rotated Jagger Wade and Joe Carol under center, but the Warriors couldn't establish any rhythm in the first 24 minutes.

"I'm really proud of our line up front on both sides of the ball," Sirko said. "Proud of our running game we were able to establish along with throwing the ball. Defensively, we did it when we had to."

Central gave itself some life coming out of the locker room. The Warriors took the opening kickoff and marched down the field, culminating in a 6-yard TD run by Tristan Rascon.

However, after recovering the Warriors' onside kick try, Loveridge burst up the middle untouched for a 51-yard score and a 35-7 lead. He scored again early in the fourth quarter from 4 yards out.

Loveridge finished with 185 yards and two TDs on 18 carries to add to Mariz's 165 yards and two touchdowns on 13 carries. Grand Junction outrushed Central 367-113.

"We had a pretty rough week of practice," Loveridge said. "I didn't think we were doing very well in practice. But we came out and played and my boys up front did a great job."

One minute later, Mariz struck again with a run to the left side, streaking down the sideline for a 59-yard score. A two-point conversion increased the lead to 43-7.

Rascon closed the scoring with a 2-yard touchdown run with 4:32 left. He finished the game with 90 yards on 14 carries.