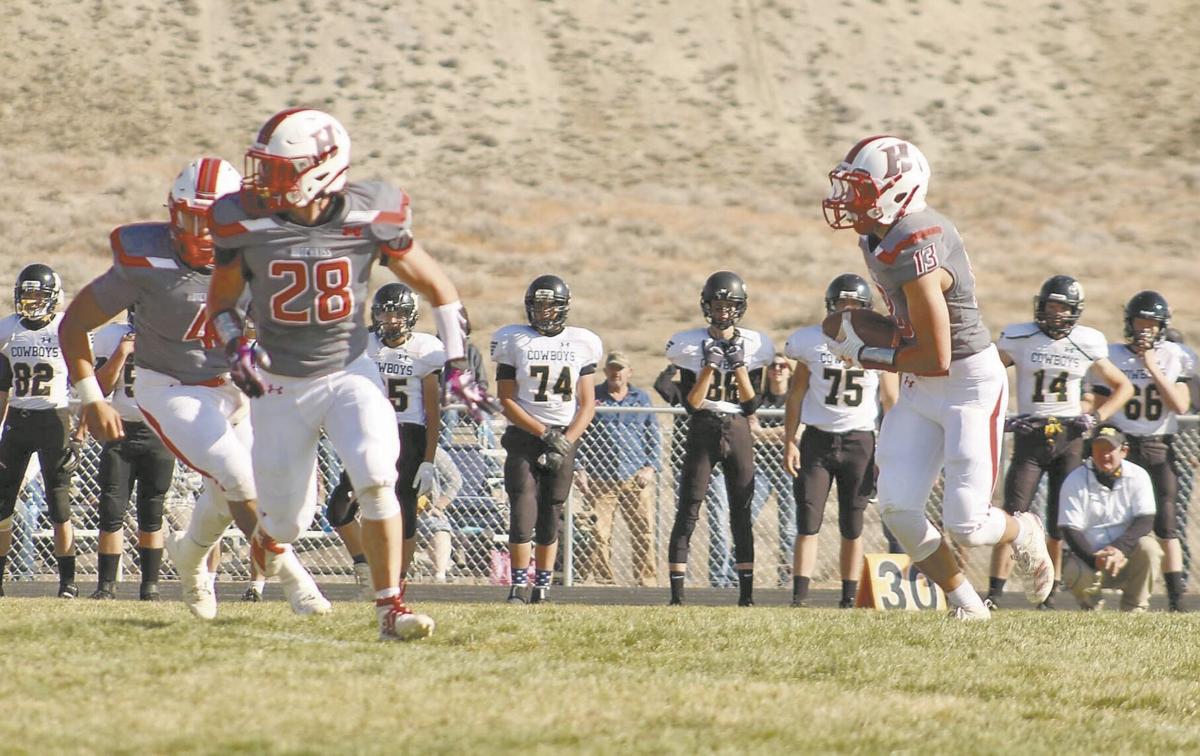 Hotchkiss running back Mordecai White, 13, follows his blockers to pick up some yardage earlier this season. White leads Hotchkiss, which plays at Wray on Saturday in the first round of the Class 1A playoffs, with 617 yards rushing and 10 touchdowns. 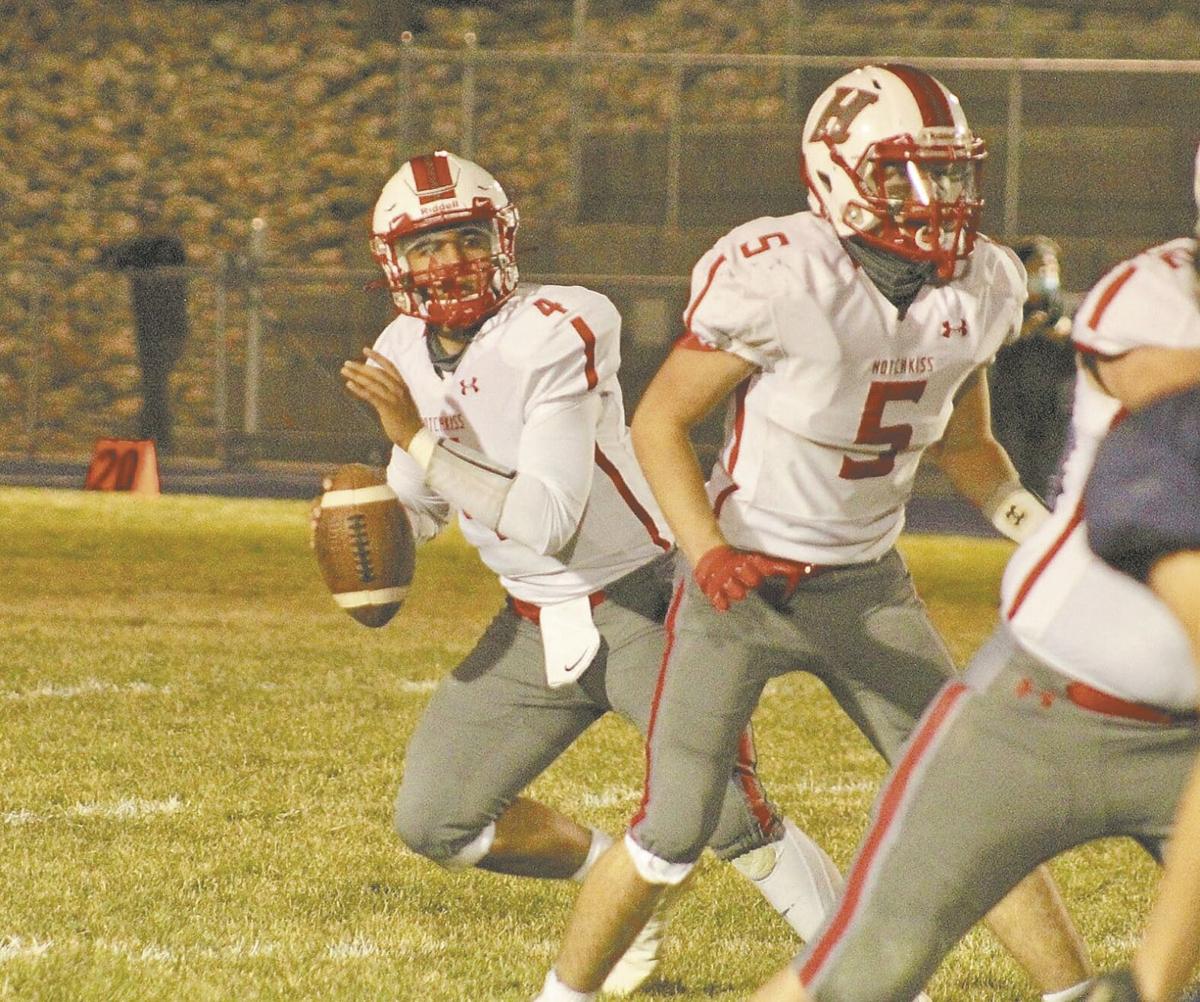 Hotchkiss quarterback Yahir Chavez, 4, looks for an open receiver earlier this season. Chavez has run for five touchdowns and passed for four TDs this season. 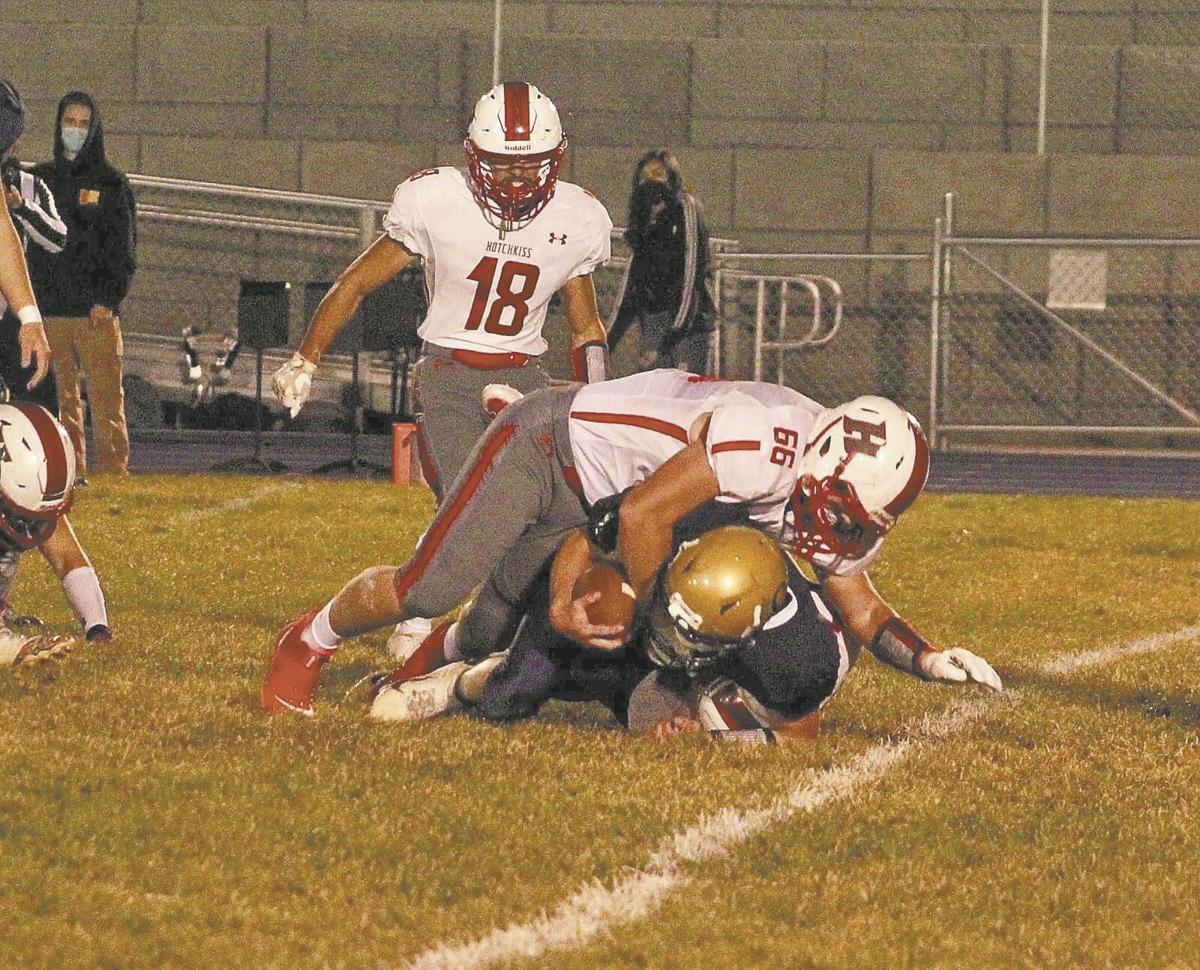 Hotchkiss’ Coulson Hollembeak, 66, collects one of his five sacks this season for the Bulldogs, who open the Class 1A playoffs on Saturday at Wray..

Hotchkiss running back Mordecai White, 13, follows his blockers to pick up some yardage earlier this season. White leads Hotchkiss, which plays at Wray on Saturday in the first round of the Class 1A playoffs, with 617 yards rushing and 10 touchdowns.

Hotchkiss quarterback Yahir Chavez, 4, looks for an open receiver earlier this season. Chavez has run for five touchdowns and passed for four TDs this season.

Hotchkiss’ Coulson Hollembeak, 66, collects one of his five sacks this season for the Bulldogs, who open the Class 1A playoffs on Saturday at Wray..

The turnaround is finally complete for Hotchkiss football team.

After inheriting a program in need of rebuilding in 2016, coach Curtis Hintz is finally seeing the fruits of his labor after years of inconsistency.

After going 10-17 from 2016-2018, the Bulldogs finished the 2019 regular season 7-2 behind a strong running game and a stout defense. Hotchkiss’ season ended with a 14-7 overtime loss to Highland in the first round of the Class 1A playoffs.

That overtime defeat was a major spark in the Bulldogs’ 6-0 regular season this fall.

“We knew that we had some really solid kids coming back and that experience kind of made them hungry,” Hintz said. “They’ve worked extremely hard in the weight room this past spring. A lot of our kids are three-sport athletes and they had their seasons shut down. I think it’s made them appreciate it a little bit more and that sense of urgency to work hard now because you don’t know what the future holds.”

Hotchkiss earned the No. 4 seed in the 1A playoffs in this shortened season. Because of COVID-19, each classification only has eight postseason spots. With a win at Wray (5-1) on Saturday at noon, the Bulldogs will secure their first trip to the state semifinals since 2011.

Mordecai White, the team’s leading rusher with 617 yards and 10 touchdowns, sees selflessness as the offense’s best asset. Twelve different players have run the ball this season and Hotchkiss is averaging 302.3 rushing yards per game.

“Personally, it’s about being unselfish,” White said. “There are times when I could pursue cutback lanes where it may be a 50-yard gain or it may be a 3-yard loss, but I can’t take any of the credit. I wouldn’t be anything without my linemen up front and my quarterback and fullback giving me the ball and blocking for me. I really give all the credit to them.”

Another running back, Traycer Hall (168 yards, 3 touchdowns), has been the standout player on a standout defense. The senior has team-high 72 tackles, 14 tackles for loss and one sack, leading a defense that allowed only six points per game in the regular season.

Hall also points to selflessness as the unit’s key to success. White has a team-high three interceptions, with the rest of the defense hauling in five more picks. Two players (Coulson Hollembeak and Robert Cochran) have at least five sacks.

“Something we’ve been working on all year has been ‘Do Your Job,’ ” Hall said. “When we decide to get selfish and one person decides to go for the tackle instead of doing his job, that’s when things get messed up. The biggest thing for me is that I’ve been flying around and doing what I’m supposed to do, and I trust that all of my teammates are going to do what they’re supposed to do.”

Despite a perfect regular season, the Bulldogs are hitting the road for their playoff game against Wray, which scored at least 38 points in four of their six games.

The other Western Slope team to make the 1A playoff field is No. 7 seed Meeker, which faces the No. 2 Indians tonight at 7 p.m.

Meeker’s only loss came in a 14-8 defensive battle against Hotchkiss. Senior quarterback Ryan Phelan threw for 918 yards with six touchdowns with another three touchdowns on the ground. The Cowboys’ ground game is led by Kelton Turner (585 yards, seven touchdowns) and Jeremy Woodward (512 yards, eight touchdowns).

The Indians outscored their opponents 325-0 this season.

The Indians just got into the 4A field, earning the eighth seed. Their reward for their efforts is a road game Saturday at 3 p.m. against top-seeded, Dakota Ridge, a team that has outscored its foes 308-32 and hasn’t allowed a touchdown since Oct. 15 .

Montrose has used a balanced approach for success this year, with more players shouldering the load of running the ball than usual. However, the team goes into this weekend still unsure of who will be under center.

“We’re not really reliant on one kid and that’s the truth,” Montrose coach Brett Mertens said. “We have like six different running backs who are carrying the ball multiple times a game. Keagan Goodwin was our quarterback but he actually got hurt mid-year, so Bridger Kurtz has stepped up. We’re not 100% sure which kid is going to play, but it will be one of those two.

“We’ve been a real team in terms of not leaning on one guy.”

The Panthers started the season 4-0 before losing senior quarterback Nolan Bynum to a leg injury, falling at Moffat County and having their final game of the regular season scratched.

However, Delta, which made the 2A state title game last season, still has the athletes to eradicate the negative vibes that have haunted the program down the stretch.

Scharnhorst has other offensive weapons in running back Timothy Horn (436 yards, two touchdowns) and Colbi Braslin (25 catches for 425 yards and four touchdowns). The Panthers hope their efforts will be enough to spur them to another deep postseason run. Their next opponent, the Broncos (Saturday at 1 p.m.), have scored at least 34 points in every game but their one loss to Sterling.

Platte Valley’s offense has been balanced all season, passing for 181.2 yards and running for 226.6 yards per game.