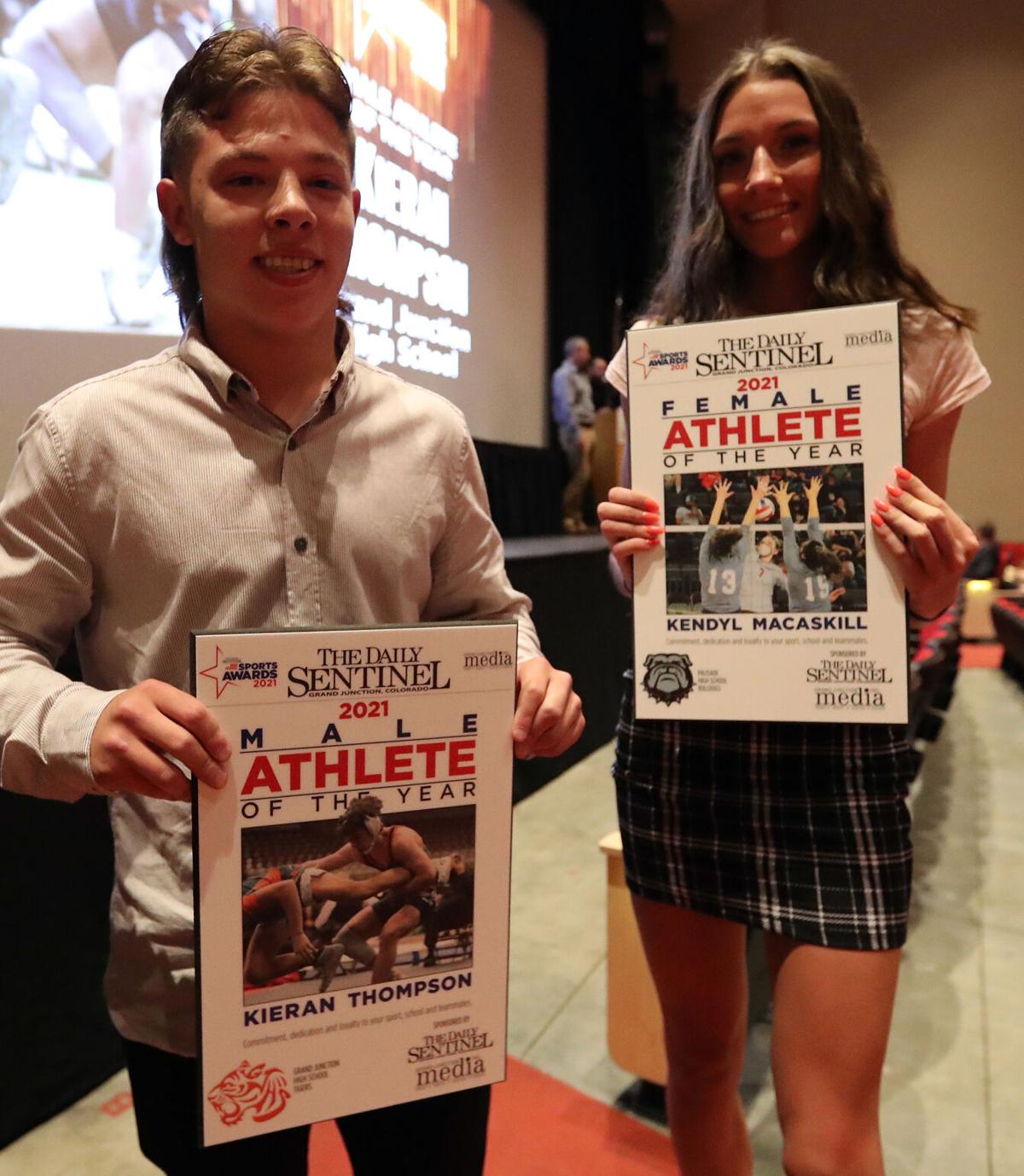 Grand Junction’s Kieran Thompson, left, and Palisade’s Kendyl MacAskill, right, hold up their awards Monday night after being selected the Male and Female Athlete of the Year at The Daily Sentinel Sports Awards. 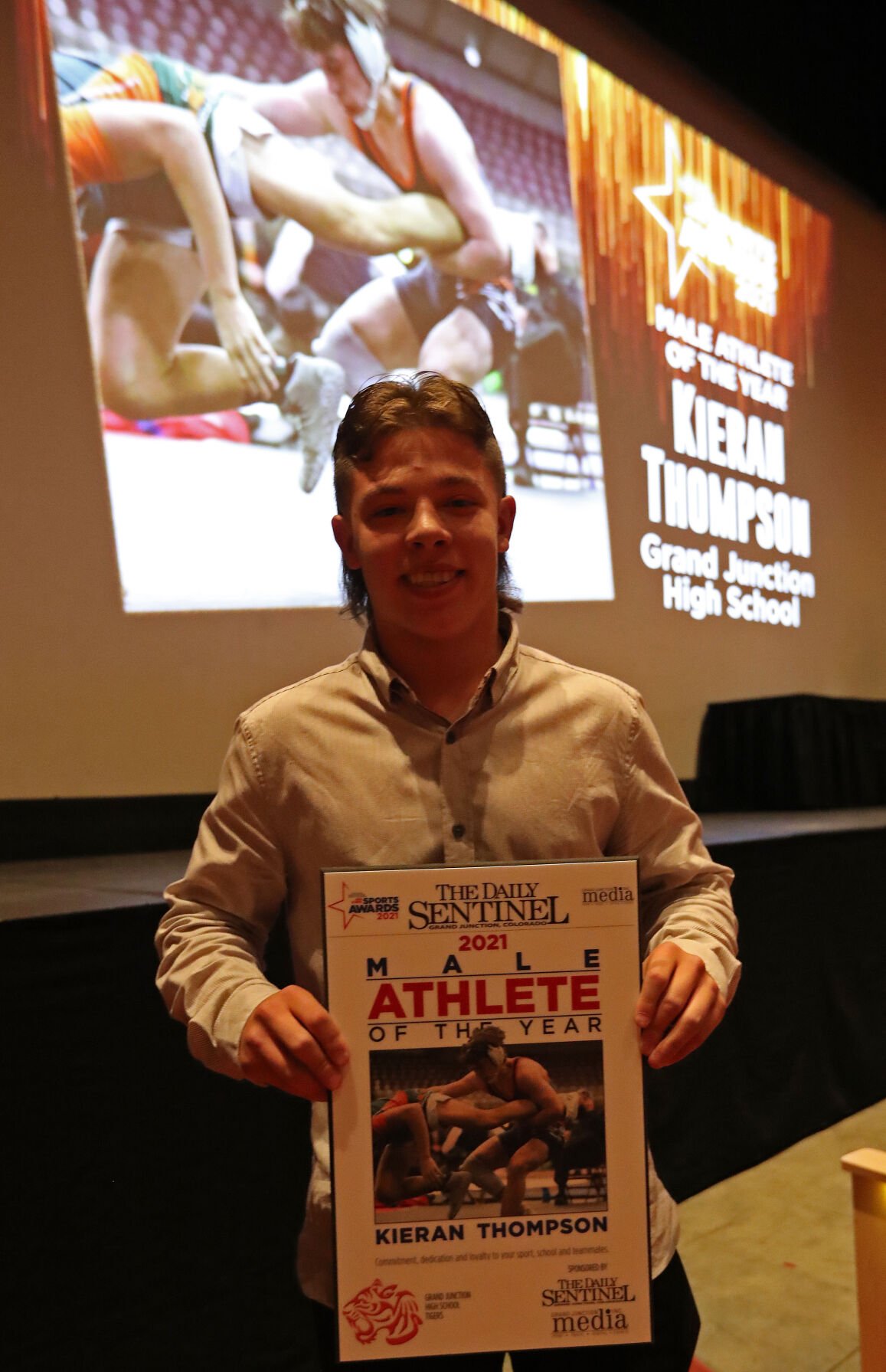 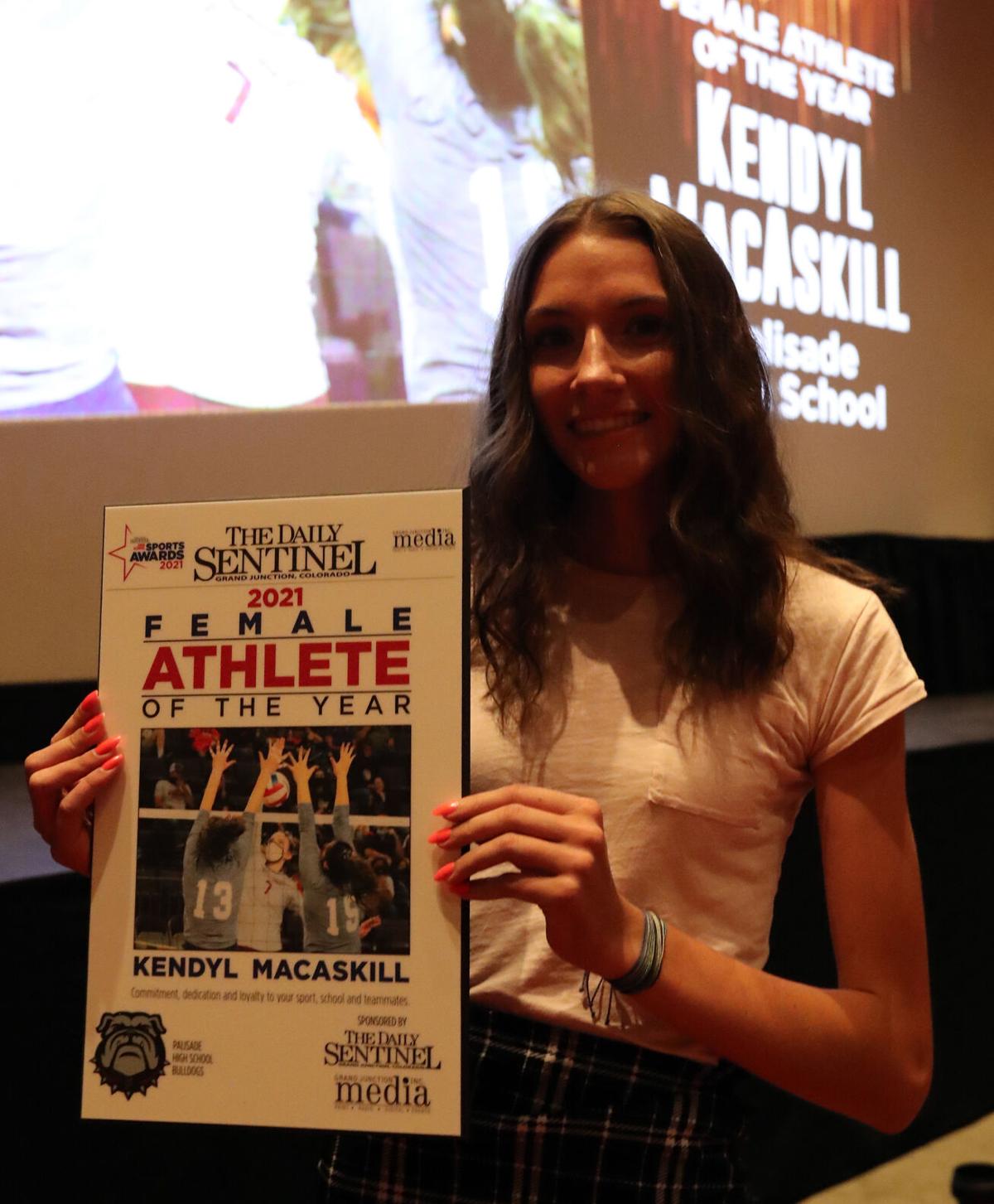 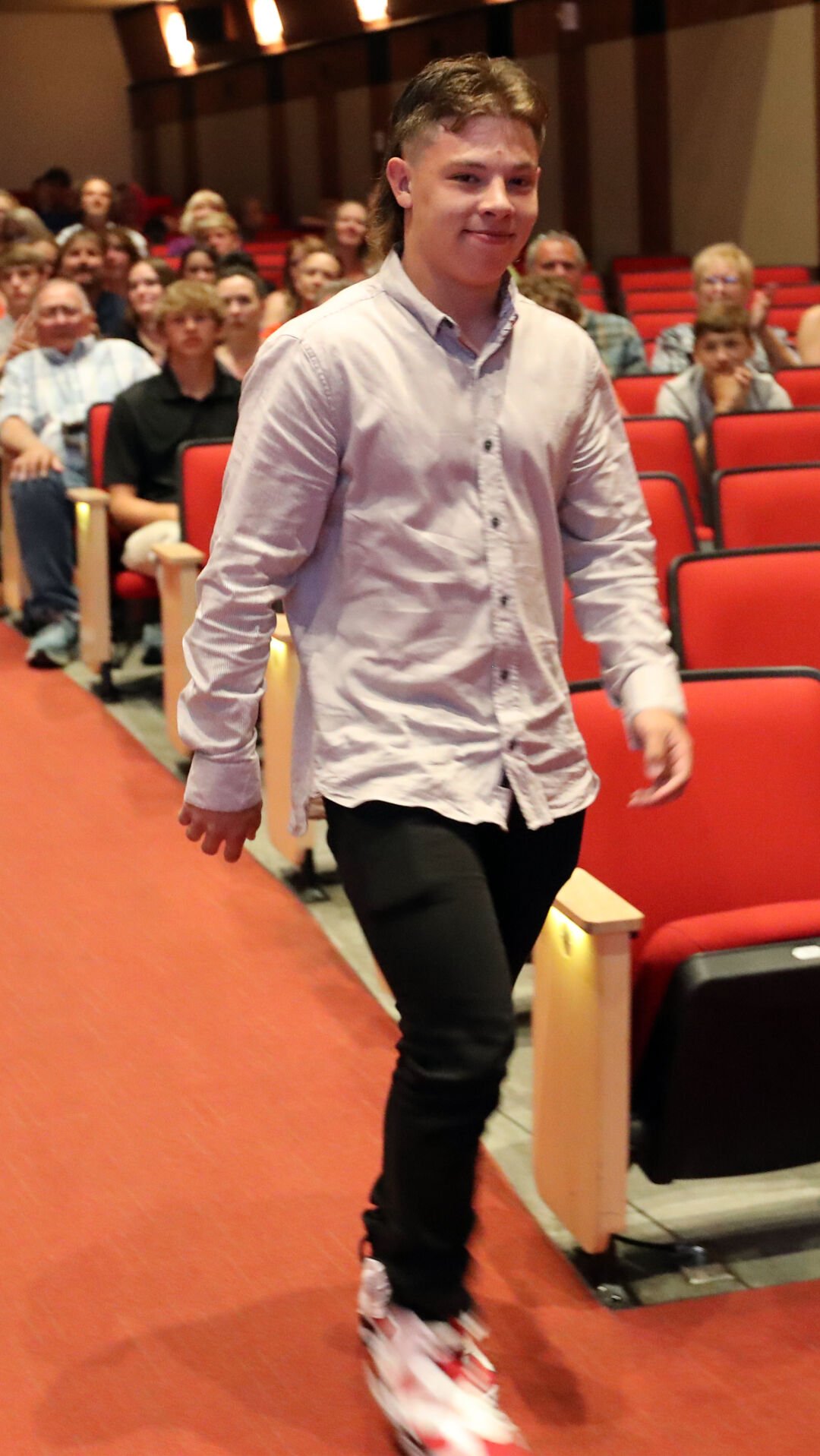 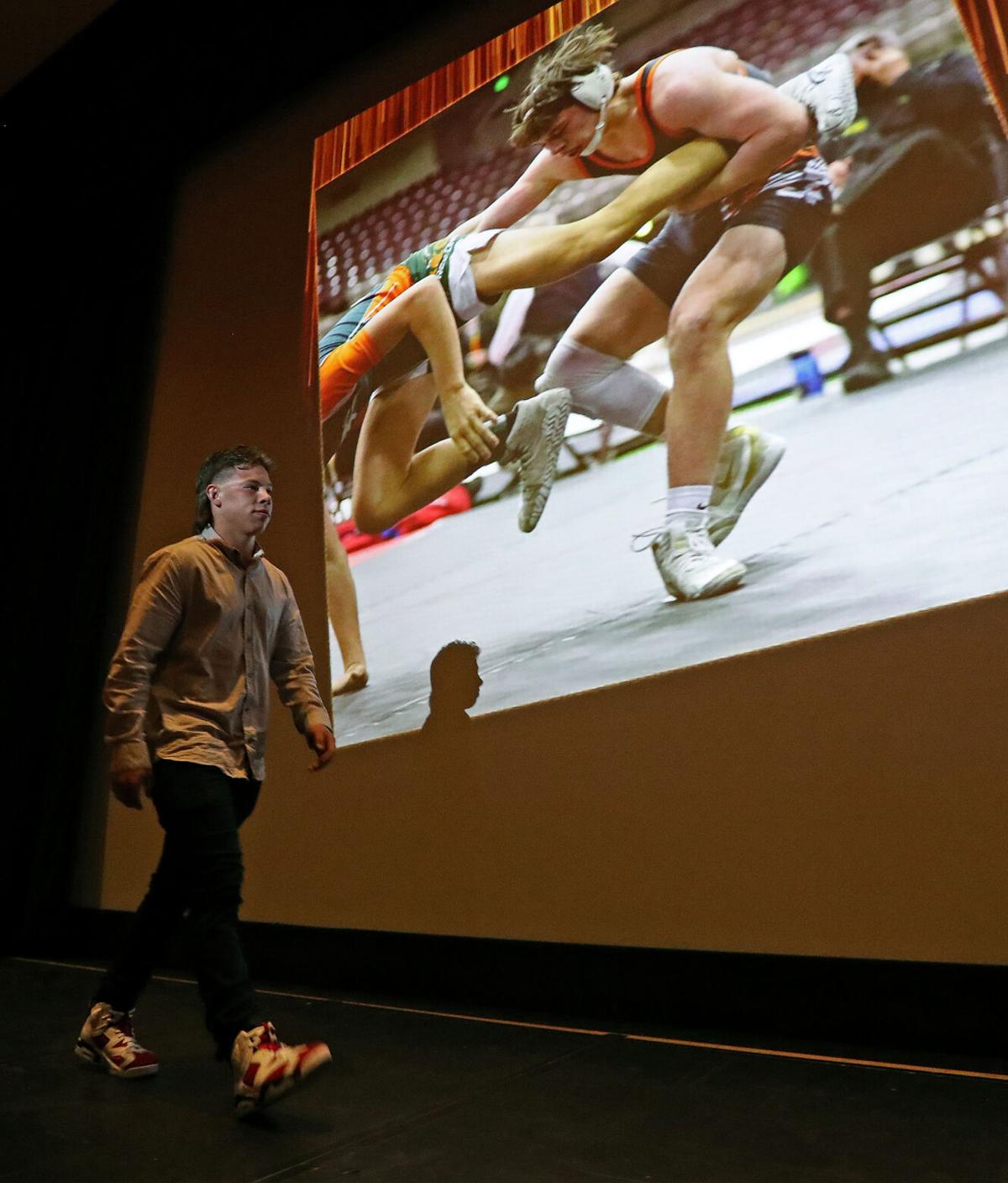 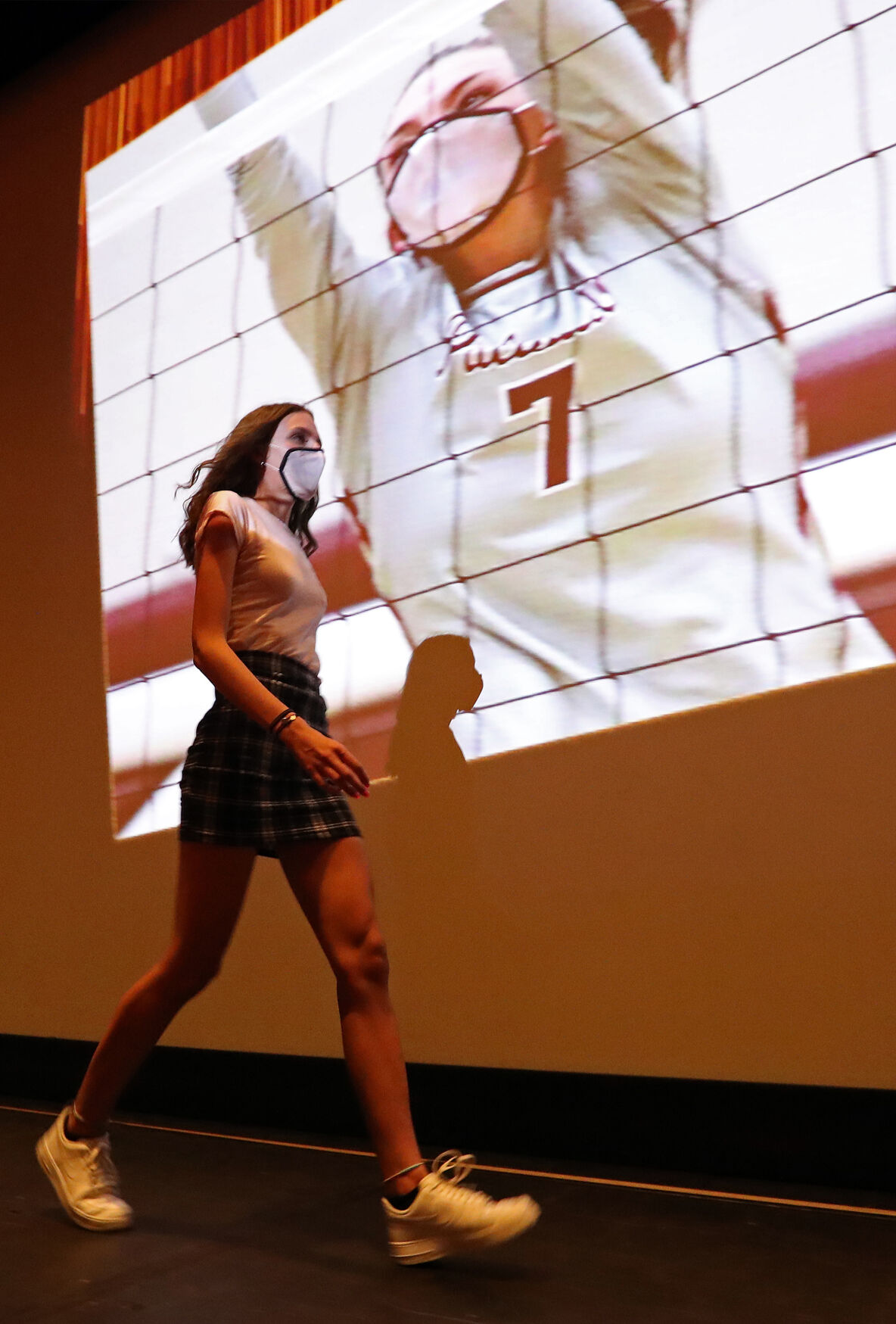 Grand Junction’s Kieran Thompson, left, and Palisade’s Kendyl MacAskill, right, hold up their awards Monday night after being selected the Male and Female Athlete of the Year at The Daily Sentinel Sports Awards.

Entire sections of Stocker Stadium that would normally have been graced by players’ families and friends were instead only seating giant X’s made from tape.

The feeling in student-athletes’ guts that the 3-pointer they just sank or the ace they just served or the slap of the mat for a pin didn’t receive the raucous response from the stands it normally would have.

Constantly wearing a mask around their teammates, even while playing some sports and trying to keep any shortness of breath out of their minds. This, after having worn masks all day at school and finding far fewer chances to socialize with their non-athlete friends.

Unlike the spring sports of the previous year, the School District 51 student-athletes in the 2020-2021 school year were able to compete, but the path they took to competition was an arduous ordeal that none of them will soon forget.

Fall athletes were kept in the dark about whether their seasons would commence with the Colorado High School Activities Association’s blessing until the semester had already began, leading to a shortened, often hastily scheduled football season and volleyball’s delay until the spring. As COVID-19 cases soared in the later months of 2020, the prospects of the winter season were also cloaked with uncertainty, and once those sports were approved, masks were a necessary addition.

While high school is meant to mold teenagers into college-ready minds or trade-ready hands, built entirely on the foundation of ensuring its graduates understand how the world works, it’s also a time for kids to still be kids, free from the stress of society’s ills staring them directly in the face on a daily basis. And that was exactly what happened when the pandemic turned their lives upside down.

Despite all that adversity, all that unfairness, all those circumstances that were never faced by District 51 athletes before and hopefully won’t ever be a reality in the future, this year of high school sports provided unusual and unique experiences for the athletes.

There is one common trend I noticed from the past year of reporting on these athletes: if anything, the pandemic made them more appreciative of their athletic careers, than ever.

“I think the first thing that comes to mind is just being grateful that we had the opportunity, because obviously, it could have very easily gone the other way for us to not have had the opportunity to go to school or have sports at all,” said Palisade High School graduate Kendyl MacAskill after winning the Female Athlete of the Year award at The Daily Sentinel Sports Awards on Monday. “It was important that we got to have it and I think it was a special year. We grew a lot closer with our teammates and it made it all the ups and downs in athletics, as well as in school, all the more special because of the circumstances.”

Male Athlete of the Year Kieran Thompson, a graduate of Grand Junction, echoed MacAskill’s sentiments. After all, for athletes, even if the stands are mostly empty and masks are being worn, as long as there’s a game or a match or an event to play or compete in, the goal always remains the same.

“I’ll think about all the hard work and dedication I put in, even through hard times with COVID and everything being regulated and locked down, not even knowing if I was going to have a wrestling season or not but still putting in the work in hopes that I would have a season, which I did,” Thompson said. “It might not have been the season I or many others wanted, but it was so great to at least be able to go out there and compete and give it our all one last time.”

The more I think about it, the more I appreciate these athletes’ gratitude for the chance to play, especially when I think about what makes the prep sports experience what it is, especially having played football in high school myself.

Sure, for much of the past year, the stands were at least half-empty (or half-full, for the more optimistic). Sure, players had to wear masks while catching their breath after charging down the court to prevent a breakaway layup. Sure, sometimes, their grandparents and friends had to find out how they did not by watching them, but by reading a story in The Daily Sentinel or watching a news highlight the next day.

However, so much more goes into the prep athlete experience than the events themselves. Being a prep athlete is shedding buckets of sweat at practice or in the weight room with your friends and everyone sharing the mutual struggle of being sore and stiff at school the next day. It’s a hilarious quote or action by a teammate during a road trip that becomes an inside joke with the entire team and maybe even results in a nickname. It’s rallying around your coach when they’re facing a personal struggle, like the Palisade girls basketball team has done for head coach DeAnne Larsen since her breast cancer diagnosis last May.

Sure, the Western Slope had its share of teams and athletes that made deep runs in their respective sports to capitalize on the chance to compete. Central softball made the state semifinals, Palisade volleyball made it to the state tournament, De Beque was one win short of its second boys basketball title in three years, plenty of wrestlers across the region won and contended for state titles, and Rifle won a football championship — in May.

However, as cliché as it might sound—– and I hope I don’t come across like a motivational cat poster when I say this — every team that had the opportunity to compete together, to form their own bonds and chemistry and memories, was, in some way, a winning team.

Even the teams that didn’t win as much as they would have liked, still won this past school year, because they got to compete together. After the past school year, “together” should never be taken for granted again.

A different kind of replacement