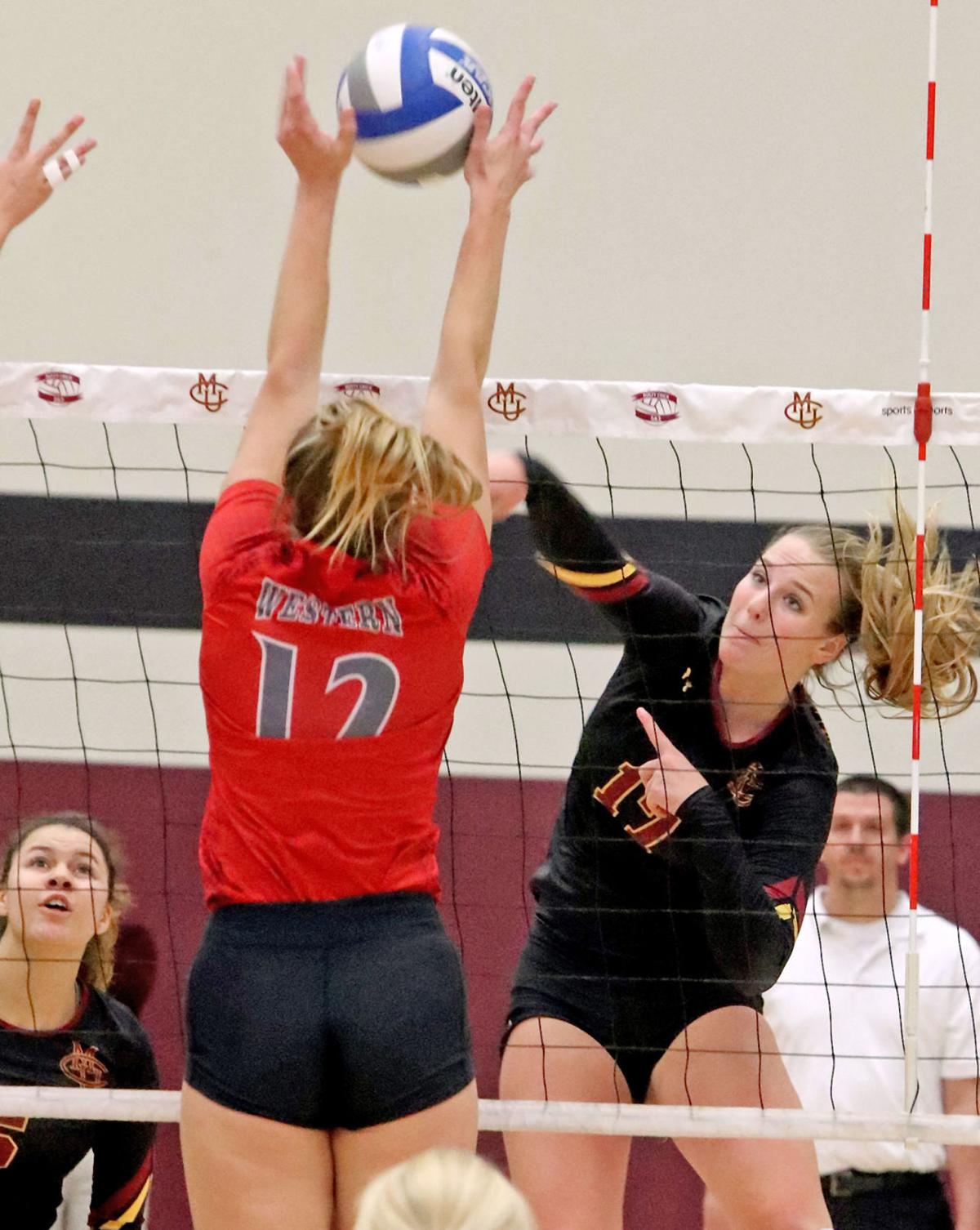 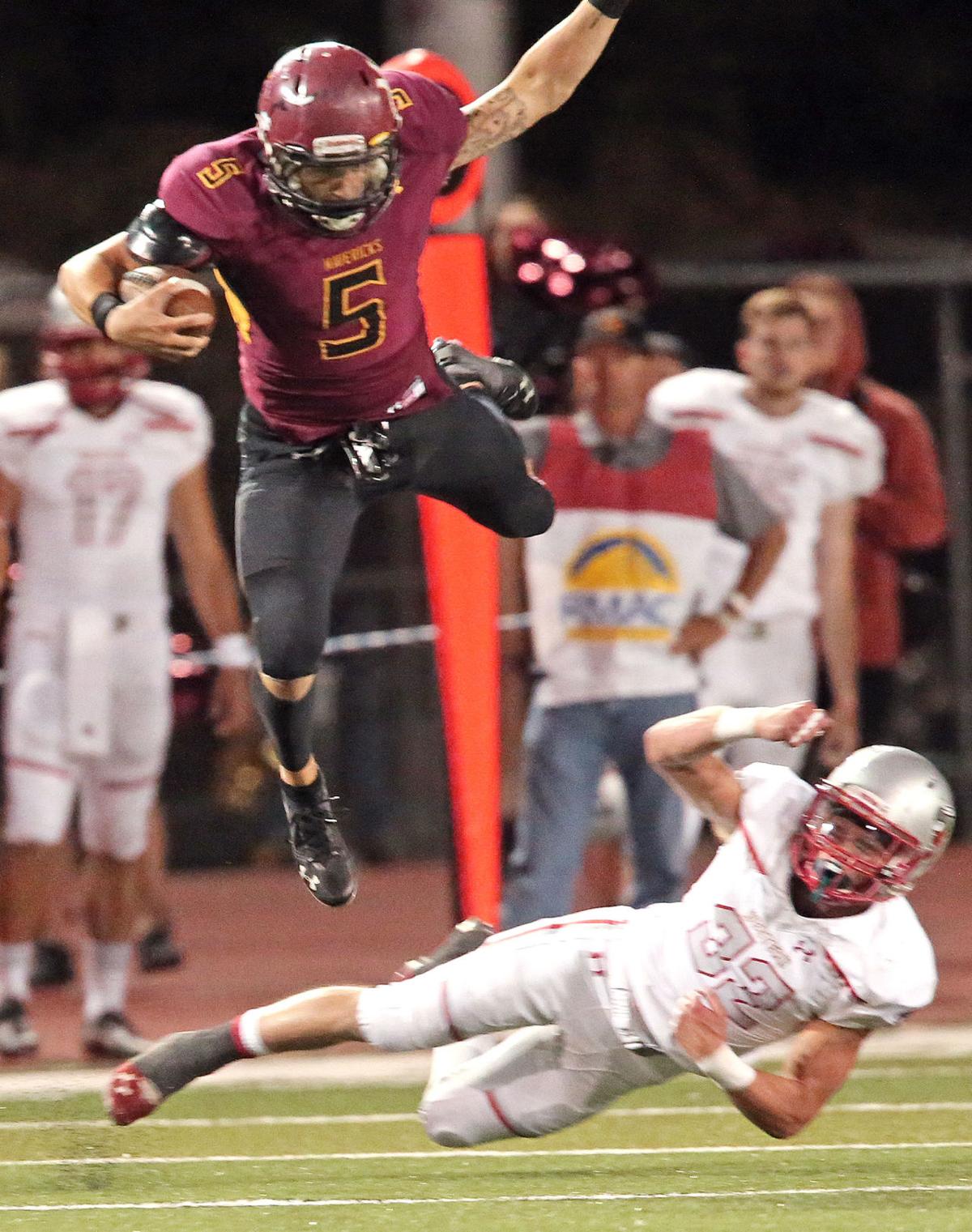 {span class=”Fid_2”}Colorado Mesa’s Isaac Maestas leaps forward after a 29-yard run on a fake punt Saturday night in the second quarter of the Mavericks’ 30-28 loss to Western Colorado at Stocker Stadium. Maestas rushed for 139 yards and a touchdown in the loss{/span} 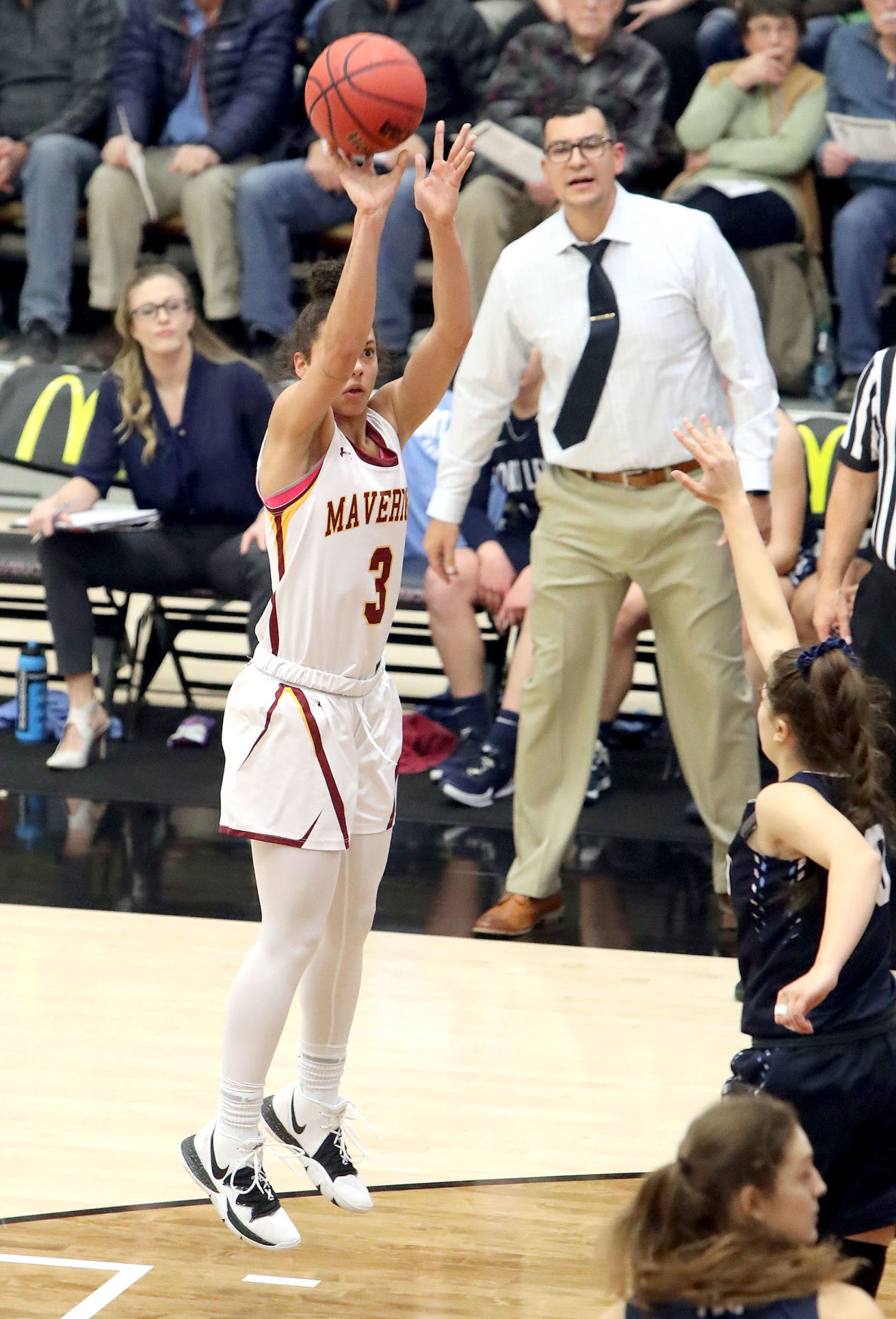 {span class=”Fid_0”}Daniella Turner is the Mavs’ leading scorer, averaging 15.7 points per game coming off the bench.{/span} 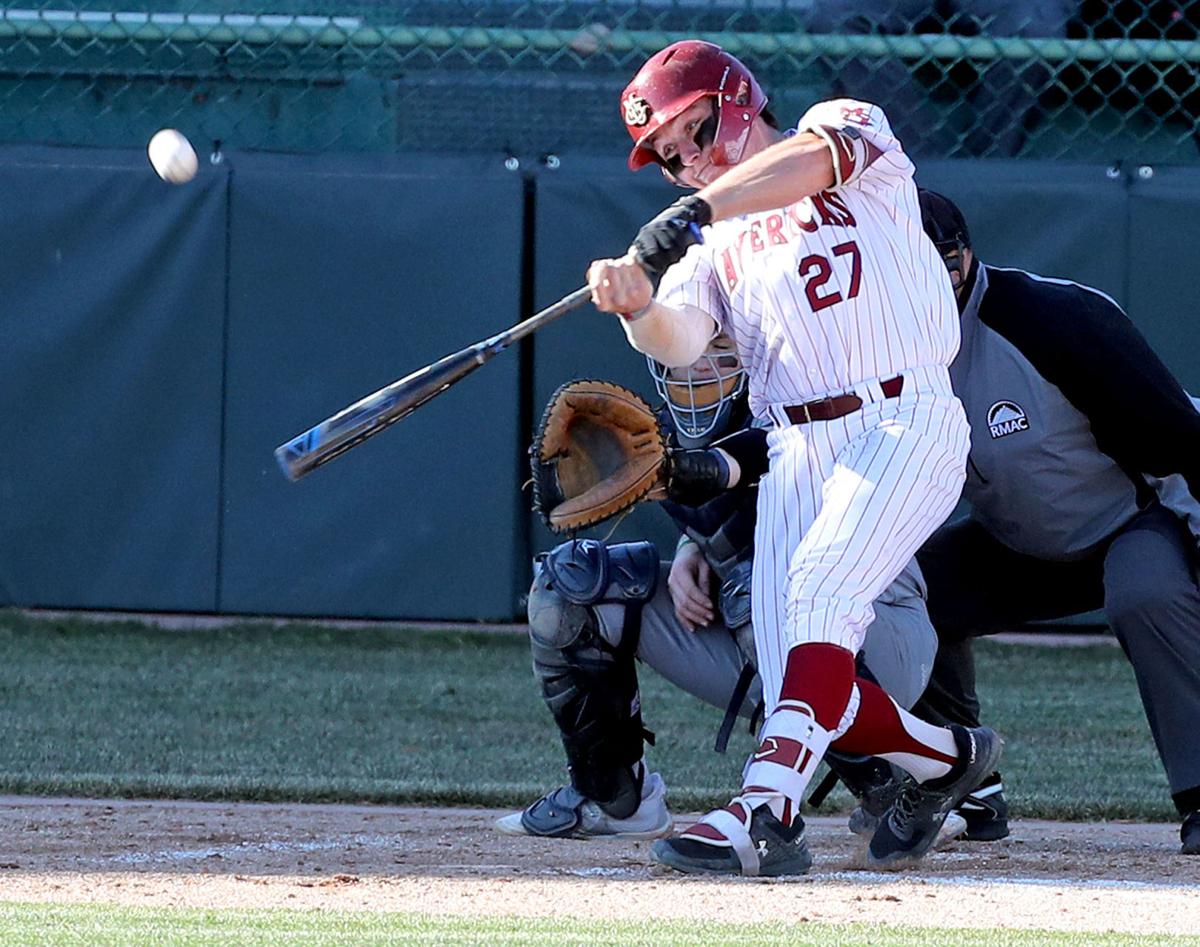 On Tuesday, tha NCAA Presidents Council approved a reduction of the maximum number of games for Division II schools for the 2020-21 seasons. Reducing games should save Colorado Mesa roughly $350,000, according to co-Athletic Director Kris Mort. Daniella Turner, left,and the basketball teams will be limited to 22 games. Isaac Maestas, center, and the football team will play 10 games. Holly Schmidt, right and the volleyball team will play 22 games and Spencer Bramwell, below, and the baseball team will play 40 games.

{span class=”Fid_2”}Colorado Mesa’s Isaac Maestas leaps forward after a 29-yard run on a fake punt Saturday night in the second quarter of the Mavericks’ 30-28 loss to Western Colorado at Stocker Stadium. Maestas rushed for 139 yards and a touchdown in the loss{/span}

{span class=”Fid_0”}Daniella Turner is the Mavs’ leading scorer, averaging 15.7 points per game coming off the bench.{/span}

On Tuesday, tha NCAA Presidents Council approved a reduction of the maximum number of games for Division II schools for the 2020-21 seasons. Reducing games should save Colorado Mesa roughly $350,000, according to co-Athletic Director Kris Mort. Daniella Turner, left,and the basketball teams will be limited to 22 games. Isaac Maestas, center, and the football team will play 10 games. Holly Schmidt, right and the volleyball team will play 22 games and Spencer Bramwell, below, and the baseball team will play 40 games.

As if college athletic departments weren’t in scramble mode already, wondering when — or if — seasons will start again, now they’re faced with reworking their schedules.

The NCAA Presidents Council on Tuesday approved a reduction in the maximum number of games or dates of competition at the Division II level for the 2020-21 academic year. It’s a one-year cost-saving measure for financially strapped athletic departments, some of which have or are considering dropping programs.

The majority of nonconference travel will be the first thing eliminated, saving Colorado Mesa hundreds of thousands of dollars.

“We travel probably the most of anybody in the RMAC, or pretty darn close,” CMU President Tim Foster said. “We’re in the upper echelon of travel expenses in the RMAC.”

Co-Athletic Director Kris Mort, who handles the budgeting for the department, said the reduction in travel should save CMU roughly $350,000 next school year. That’s even more significant when you factor in the expected lost revenue from several fundraising events that could be canceled.

“To take those couple of road trips to California from baseball and the soccer trips to Texas, basketball crossovers to Texas, the lacrosse trips back east, you start pulling all those nonconference things off … that haircut alone is about $350,000 in savings, the mileage on buses, driver wages, hotels, flights, meals, etc. Just this small cutback in games for every sport at our institution is saving about $350,000.

“It’s not all institutional support. Of that, we also estimate we’re probably going to miss about $200,000 in lost revenue opportunities from fundraisers. People are still socially distancing, you can’t run golf tournaments. How much revenue do we stand to lose in fall golf tournaments, the Leadoff Classic, Hoedown, Wine Fest, Beer Fest? We’re going to lose some money there, too.”

The reductions will severely limit the number of nonconference games available for the 15 RMAC schools, and in the case of basketball, eliminate them altogether.

The conference presidents will determine the emphasis of the schedule in a video conference next week, but they’re likely to agree to keep the current conference schedules and sacrifice nonconference events.

Basketball has a 22-game conference schedule, which is the total number of games allowed next season. If the basketball program has a conference-only schedule next season, that means CMU’s annual Thanksgiving tournament is out, along with two other road tournaments before the RMAC season begins. When the basketball season actually begins is also still to be determined — Mesa’s first conference game is Dec. 4.

Dixie State is leaving the RMAC for Division I next year, which opens up one football date and anywhere from one to four games in other sports. Mesa’s football team didn’t fill that date, so the Mavericks are already at the new limit of 10 games. They don’t save any money there, unless they aren’t able to travel to Liberty, Missouri, for the season opener against William Jewell, if COVID-19 restrictions are in place at that time.

Other sports will have to make some major adjustments in scheduling.

“People are having to make hard decisions and you’re seeing people dropping sports in Division I, II and III,” RMAC Commissioner Christopher Graham said. “If the goals are cost savings to support our broad program offerings and student-athlete opportunities across the division, then maintaining long, nonconference trips doesn’t fit with that premise. Staying within conference is really going to be the focus of probably most Division II conferences.”

It also helps eliminate the issue of one conference allowing fans at games and another conference closing events to fans. Graham said the RMAC presidents have not made a decision on whether to restrict fans at games next school year.

Mesa’s volleyball team will lose one of its two nonconference tournaments, scrubbing its trip to Angelo State (the Mavs were planning to fly) and keeping the tournament at Nebraska-Kearney (a bus trip).

“If they stick with our 18-game (RMAC) schedule that means we’ll have to skip one of the opening weekends and the direction we’re receiving from the university is basically it will be the more expensive of the two,” CMU coach Dave Fleming said.

“I really think anyone who’s hosting one of those nonconference tournaments is really going to want to host, so everybody is going to be scrambling. Everybody’s going to have to reschedule those first two weekends and then there’s going to be restrictions on you’re not going to be able to be on certain campuses, certain teams won’t be able to fly. I think it’s going to be a mess.”

Baseball lost 10 games off its usual 50-game schedule. The Mavericks played 14 nonconference games this spring, and will lose its four-game series against the Trailblazers, but the conference is keeping its 36-game schedule, adding “pod” weekends, with three teams playing doubleheaders at one site.

CMU baseball coach Chris Hanks understands the need to cut back financially, but wishes the NCAA would have given coaches a chance to come up with some creative solutions to play more games, especially if they can be played with a minimum of expense by playing a nearby school. That’s a challenge for CMU, since the closest Division II baseball teams are in Denver, but a doubleheader could be played by driving over and back the same day.

“It’s easier for Denver teams to get together on an extra weekend at little to no expense than it is for us, so it hurts us more,” Hanks said. “I truly am still about kids getting an opportunity to compete, and if you can compete with little to no expense, why can’t we compete?”

Unlike most other sports, baseball and softball are dependent on weather. Softball can play a 44-game season next spring, down from 56.

“If we lose two series to weather, now we’re only playing 32 games,” Hanks said. “I think even if we would have the opportunity to play 42 games, that fits more in line with what was cut from football and basketball. Forty-four is a better amount, but at the end of the day, every little bit (of money) that you can save matters.”

Cutting games to save budgets, programs

The NCAA Division II Presidents Council approved cutting the maximum number of games for the 2020-21 school year. It's a one-year plan aimed at easing financial strain caused by COVID-19 and help prevent schools from eliminating programs.

Notes: CMU numbers are 2020-21 schedules for football, volleyball, men's and women's soccer; all others are 2019-20 schedules. RMAC numbers are regular-season conference contests only. Sports other than baseball, basketball, football, soccer and softball are allowed dates of competition rather than number of contests. Wrestling is allowed two back-to-back dual dates that count as one date of competition. Track & field combines the indoor and outdoor seasons. Swimming and diving is tracked by individual student-athlete dates of competition. Women's wrestling did not fall under NCAA guidelines in 2019-20; it is an NCAA emerging sport in 2020-21.

*CMU men and women played in preseason conference crossover tournaments, which were exempt from counting toward maximum contests. Those tournaments will not be exempt in 2020-21.

Amid civil unrest, Packers players speak out, hope for change

Report: NFL says camps can only be held at team facilities