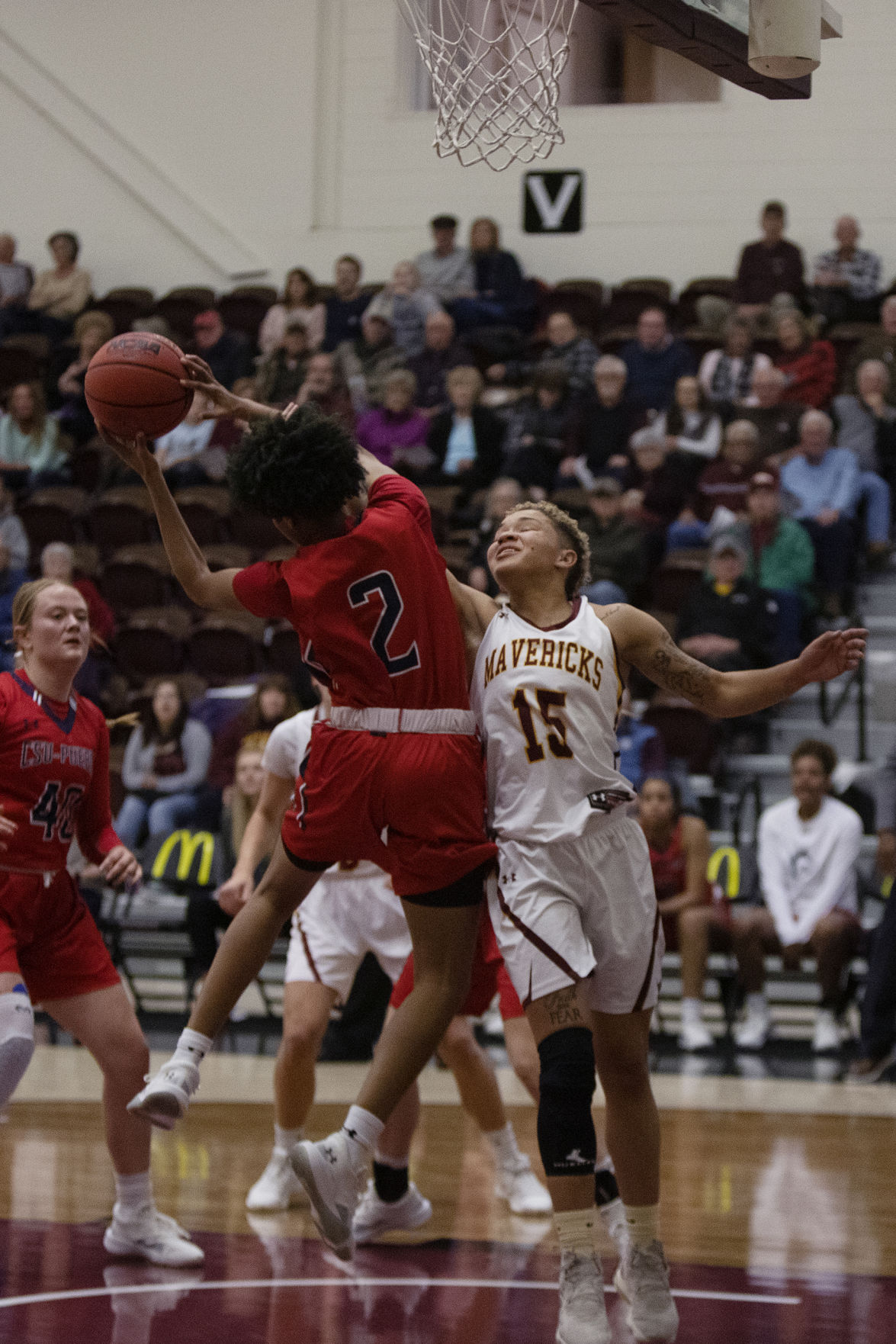 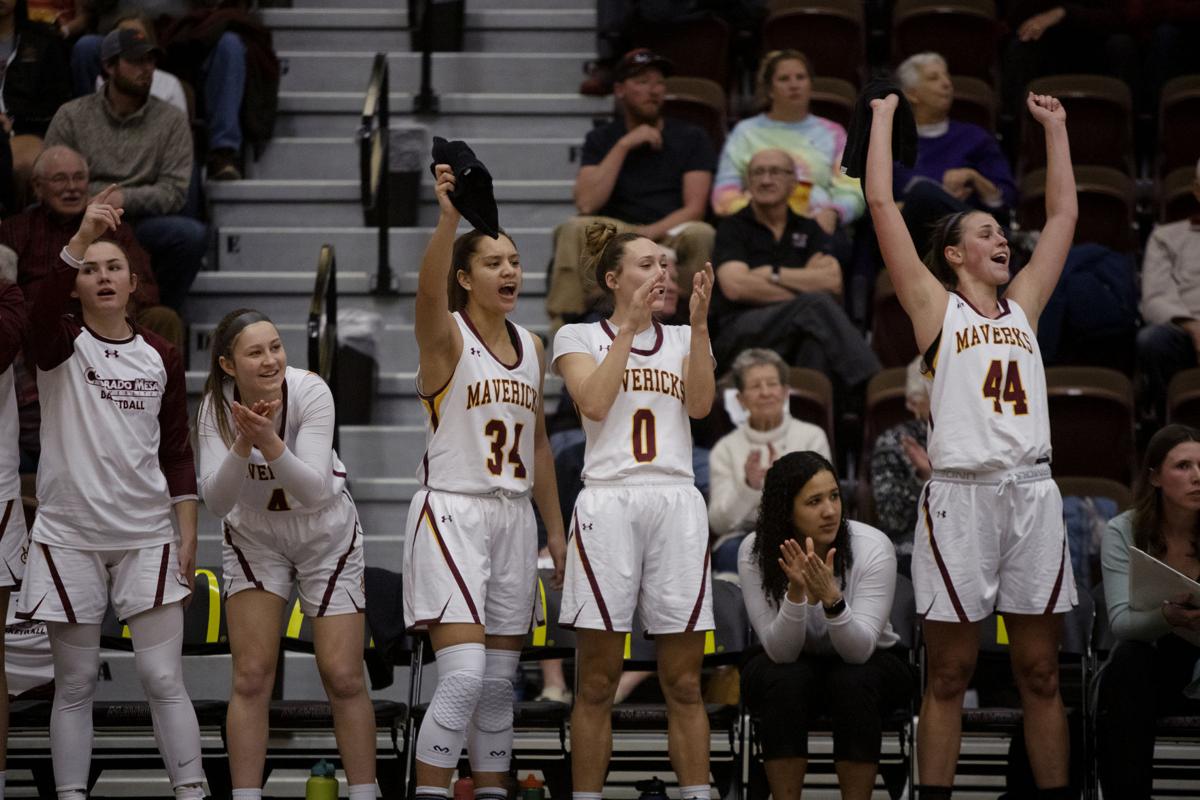 Colorado Mesa University women celebrate a play made by their teammates during a game against Colorado State Universtiy Pueblo that resulted in a win for CMU on Saturday. 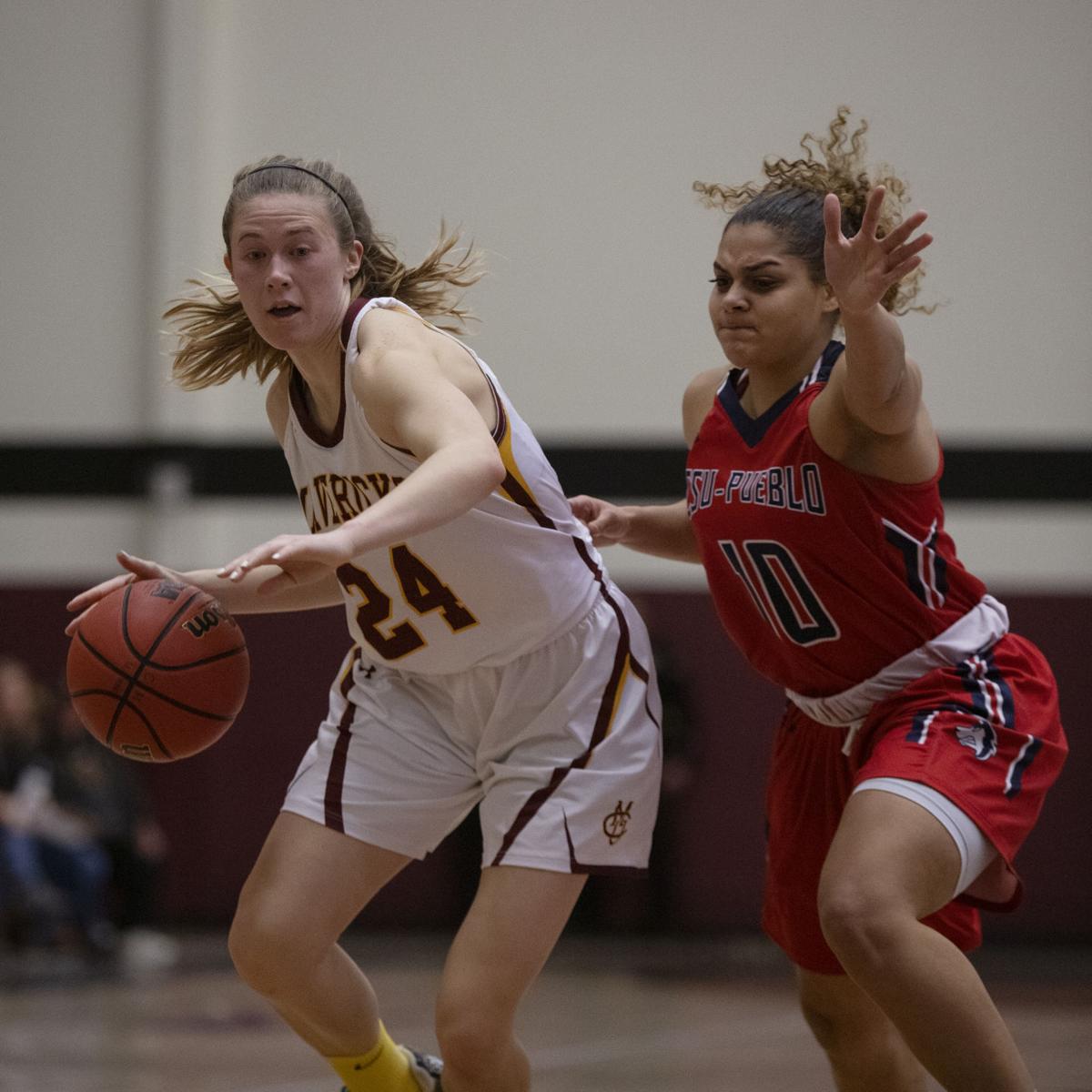 Colorado Mesa's Kylyn Rigsby drives around a CSU-Pueblo defender to score two of her 10 points on Saturday at Brownson Arena in the Mavs' 59-41 victory. 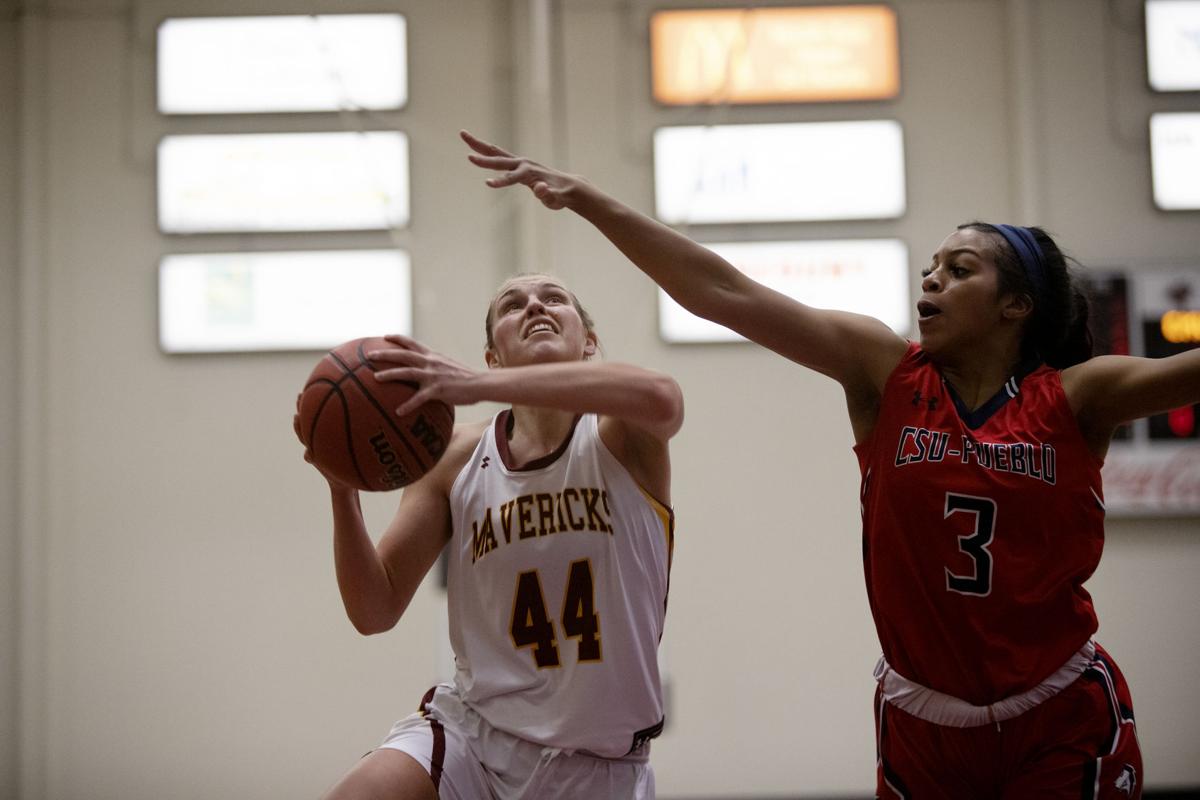 Colorado Mesa's Kelsey Siemons drives to the basket to score Saturday night, something the Mavs did a lot in their 11th straight win, a 59-41 victory over CSU-Pueblo at Brownson Arena. 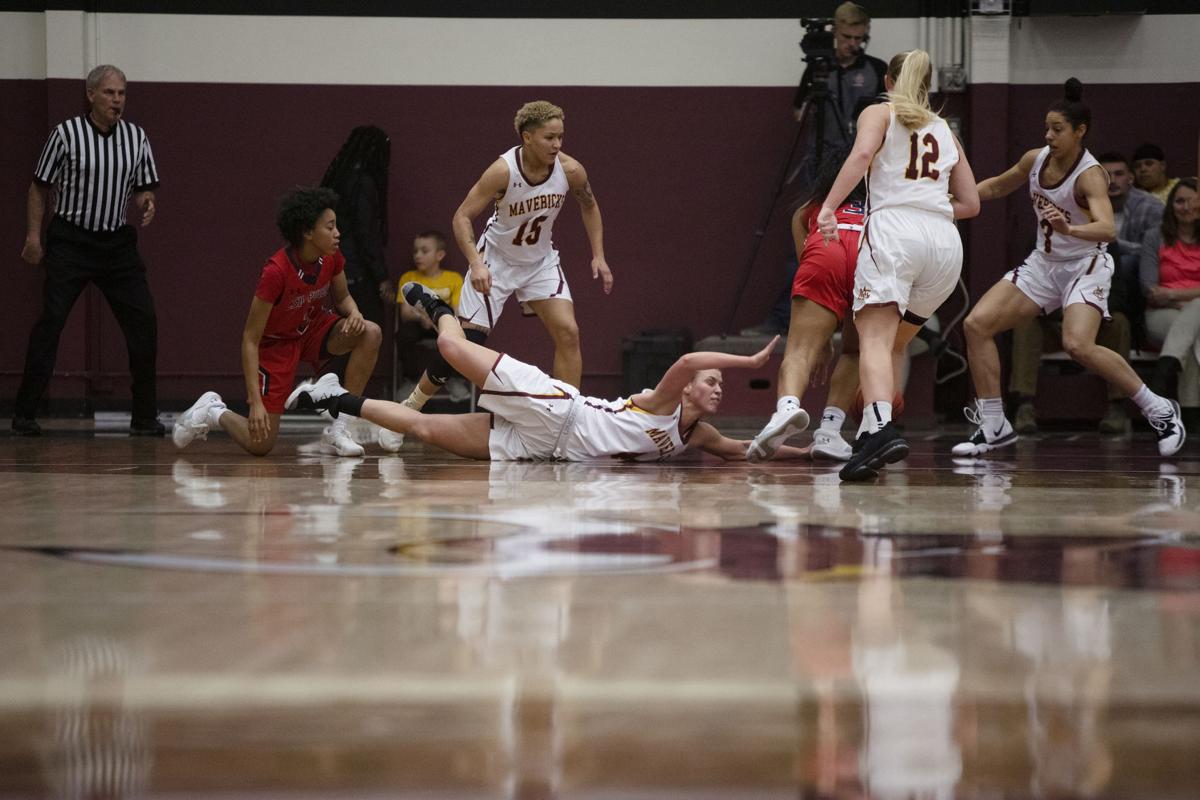 Colorado Mesa University forward Kelsey Siemons, 44, dives for the ball during the game against Colorado State University Pueblo on Saturday.

Colorado Mesa University women celebrate a play made by their teammates during a game against Colorado State Universtiy Pueblo that resulted in a win for CMU on Saturday.

Colorado Mesa's Kylyn Rigsby drives around a CSU-Pueblo defender to score two of her 10 points on Saturday at Brownson Arena in the Mavs' 59-41 victory.

Colorado Mesa's Kelsey Siemons drives to the basket to score Saturday night, something the Mavs did a lot in their 11th straight win, a 59-41 victory over CSU-Pueblo at Brownson Arena.

Colorado Mesa University forward Kelsey Siemons, 44, dives for the ball during the game against Colorado State University Pueblo on Saturday.

Here’s the thing about playing back-to-back nights in the Rocky Mountain Athletic Conference — there’s not much time to pat yourselves on the back.

The Colorado Mesa women’s basketball team had to forget about their 45-point win over New Mexico Highlands and get ready for a completely different style of play Saturday against CSU-Pueblo. The ThunderWolves are bigger, more physical, and play aggressive man-to-man defense, the total opposite of the smaller Cowboys.

“I was worried about the matchups going into it. (JaNaiya Davis, Sydni Williams and Khiya Adams) are just so long and athletic and I was worried how we would guard them, but the girls did a good job. There were a couple of times where we weren’t where we were supposed to be, but we held them to 41 points and got a win. We beat a good team by 18 points,” CMU coach Taylor Wagner said after the Mavericks’ 59-41 victory, their 11th straight win.

The matchup between Davis and Sydni Brandon, two of the top point guards in the conference, was a good one. Davis finished with 10 points, seven rebounds, one assist and two steals, but turned the ball over nine times.

“It was a battle for sure,” Brandon said. “I think it was more of a sportsmanship thing tonight. We were just giving each other good looks as opposed to other games, when we’re in each other’s heads. I think we respected each other a lot, because she’s really good, and I think she respects my game.”

Mesa (13-2, 9-0 RMAC) didn’t have as many open looks from the perimeter as Friday night, so instead, the Mavericks ran plays to get them to the basket. Daniella Turner was the main driver, taking over the game in the second half by scoring 12 of her 19 points.

Turner scored eight points in the Mavs’ decisive 15-10 run in the fourth quarter, with Kylyn Rigsby (10 points) hitting a pair of 3-pointers around four straight buckets by Turner.

”She’s been (taking control) and that’s good,” Wagner said of Turner. “It alleviates a lot of pressure on everyone else. ... Dani stepped up and hit some shots and she was getting to the basket in the fourth quarter and getting some high-percentage shots. That’s what I was happy about.”

Every time Ethan Richardson got the ball on the low block, the Colorado Mesa bench hollered in unison: “Go to work!”

The Mavs’ new big man went to work, all right. Richardson recorded his first double-double — in his second game with CMU — 21 points and 10 rebounds, leading the Mavericks to an 86-74 victory over CSU-Pueblo.

He had a size and strength advantage, and he knew it. In fact, a couple of times in the second half, Richardson had a slight smile on his face as he backed down his opponent before turning for a short jumper or hook.

“It’s great to post up and you’ve got Skin (Michael Skinner) on the back side, KP (Kolton Peterson) in one corner, Georgie (Dancer) somewhere else, it’s basically everyone on the team can shoot, so you can’t really help on me. That gives me free reign one-on-one, and one-on-one, I love that,” Richardson said, that smile popping up again.

With Skinner scoring 12 acrobatic points, with seven rebounds and seven assists, the Mavericks’ balance allowed them to pull away in what was a back and forth game in the first half. Jared Small had 17 points off the bench, Tommy Nuno scored 11, and the Mavericks (10-5, 6-3 RMAC) dominated the glass, grabbing 41 rebounds to the ThunderWolves’ 21.

The game was tied eight times and there were six lead changes in the first half.

The ThunderWolves (7-8, 5-4) led by three, 50-47, in the opening minutes of the second half, but Small scored off an offensive rebound by Richardson, Nuno cut into the lane for a bucket and then hit a jumper. Small capped the run with a nice reverse layup to put CMU up 55-50.

“The biggest (adjustment) was just communicating with each other on what we needed to do, on screens and what-not,” Skinner said. “Once we started communicating it was easier to get stops.”

Clay Verk converted a three-point play and, up 60-52 with 12½ minutes to play, Richardson really went to work.

He backed his man down for an easy bucket, set a screen as Skinner raced through the lane for a layup, and Richardson hit a one-handed jumper in the lane for a 66-54 advantage midway through the half. He scored 14 of CMU’s 22 points in a 7½-minute stretch.

“Once you have that (pick and roll) threat, it just opens everything up,” CMU coach Mike DeGeorge said. “That’s the missing piece. Not only is (Richardson) a good player, he’s that piece we’ve been missing that makes all the pieces work better.”